Off the beaten tourist track and seldom frequented by tourists to the city, the 20th arrondissement is cobbled together from a series of former villages and rural farmland which has since been absorbed into the fabric of fabric and today lies in “intra muros” Paris.

Though, with the exception of Père Lachaise cemetery, the rest of the arrondissement is little-visited (and comprises of the Belleville and Menilmontant districts), there’s still plenty of things to discover in the form of hidden gems, gastronomic delights, and long-forgotten pockets of peace in the heart of one of the busiest metropolises in Europe. Here’s your ultimate guide to the best of the 20th arrondissement.

Where is the 20th arrondissement located?

The 20th arrondissement is located in the North East of Paris on the Rive Droite (right bank) of the River Seine. The district is also known as  Ménilmontant and is just under 5.98 km2, with a population of just under 200,000 residents. The district is bordered by the 10th, 11th, 12th, and 19th districts of the city.

What is the 20th arrondissement famous for?

As one of the newer areas to be incorporated into the City of Paris (there are 20 districts of Paris which are known as ‘arrondissements’ in French), the area of the city has several areas which have retained their ‘village’ feel, notably the areas of Charonne and La Campagne à Paris. Other areas of the district contain newer build properties such as high rise apartment complexes.

Best things to do in the 20th arrondissement of Paris

Of all the things to see and do in the 20th arrondissement of the city, Père Lachaise is undoubtedly the most famous. Straddling the 11th and 20th districts of the city (though technically situated in the twentieth), the graveyard is the largest cemetery within the city limits.

The cemetery also happens to be one of the most famous in the entire world and is where the likes of Oscar Wilde, Jim Morrison, and Edith Piaf are buried. During the Middle Ages, the Cimetière des Innocents was the biggest cemetery in the city, though it was shut down during the 18th-century due to having become a health hazard. Today, the former cemetery is now where the Fontaine des Innocents is located.

Père Lachaise was created at the turn of the 19th-century to make up for the lack of internment space intra muros Paris. Though there were only 13 internments in the first year of Père Lachaise’s opening, that number swiftly grew after Abelard and Heloïse’s remains were transferred to the cemetery. Today, Père Lachaise is the most visited necropolis in the world.

Go in search of street art

One of the coolest off the beaten path things to do in Paris is to search for street art, which can be found at many locations all across the French capital. One of the best places to see street art in the 20th arrondissement is on Rue Dénoyez. If you want an even more in-depth look into street art around the 19th and 20th arrondissements, you might consider booking a street art tour like this one.

If there’s one thing that you need to know about the 20th arrondissement, it’s that, in stark contrast with the rest of the city, the area is absolutely full of green spaces, parks, and the kind of two-storey buildings which wouldn’t feel out of place in the French countryside.

Parc de Belleville is one of the best parks in the city and is set on a steep slope, providing fantastic views over the likes of the Eiffel Tower, as well as the iconic Haussmann rooftops which are so synonymous with the city. As well as being a great spot to picnic, the park also happens to be home to one of the few secret vineyards of Paris.

Even many people who regularly take the metro don’t know of its predecessor, vestiges of which survive around the city to this day. The ‘Petite Ceinture’ (literally translated into English as ‘little belt’) is so-called thanks to its belt-like nature circling the former city limits of Paris.

Though the railway was soon abandoned in favour of the new and increasingly popular métro public transport system, many elements survive and still lie on the fringes of the city today, particularly in the 15th arrondissement (in the South) and 20th arrondissements. Parts of the railway can be spied in the twentieth today, pretty close to the Père Lachaise cemetery.

The Church of Saint-Germain de Charonne and its accompanying cemetery

One district of the 20th arrondissement where the ambiance of a historic countryside village still permeates the atmosphere is that of Charonne, which is often referred to one of the ‘lost villages of Paris’. And presiding over the area, in pride of place, is that of the church of Saint-Germain de Charonne.

Of all the hidden gems of the 20th arrondissement, my favourite by far is that of La Campagne à Paris, which is quite literally translated into English as ‘the countryside in Paris’.

A little village comprising of four cobbled lanes and raised on a hill above the rest of the area, one wander around the area (or micro-arrondissement as you might refer to it), and it’s easy to forget that you’re in Paris.

If you’re visiting Paris in fall, then you’ll soon discover that due to the number of foliage and trailing vines, the beauty of this small area of the city truly becomes more magical, with fall tones and even more ample photo opportunities.

Iconic singer Edith Piaf is not only buried in Père Lachaise but actually hails from the 20th arrondissement, where she spent much of her life. Today, a pretty like square (known as ‘place’ in French) commemorates the famous French woman and holds a rather unusual statue dedicated to the singer.

When my friend showed me the secluded little garden outside of an often-forgotten entryway to Père Lachaise, I could scarcely believe my eyes. A wooded area with a small pond and more greenery than I’ve seen in the entirety of the year so far, Jardin Naturel Pierre-Emmanuel is well worth checking out while in the 20th arrondissement.

One of the other elements of the 20th arrondissement which is worth noting is that the entire district is largely void of the kind of chain stores and big brands which permeate the rest of the city.

Instead, the eastern area of the French capital boasts a wide selection of independent businesses. One such is that of ‘La toute petite libriaire,’ which, as you might assume from the name, is a teeny-tiny bookshop tucked into the corner of a building, but still manages to sell a wide range of French language books, including fictional, historical, and biographical works.

One of my favourite hidden gems can be visited for the shortest of times during the week, but perhaps that is what makes the visit inside this often closed-off area of the 20th is that it is so exclusive and hard to visit, making it a real pleasure when you do venture inside. A community garden that’s merely open during the weekend, there are all kinds of vegetables, fruits, flowers, and even a small pond featuring fish.

Enjoyed reading this guide to the best of the 20th arrondissement of Paris? Pin this article now, read it again later: 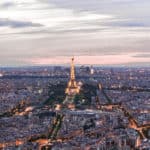 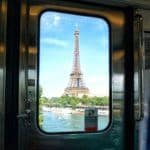 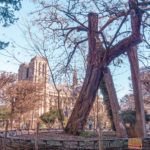 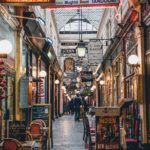 How to Spend a Rainy Day in Paris (and still have fun!)
22 shares
Click here to cancel reply.