One of the lesser-known and more residential districts of Paris is that of the 15th arrondissement. Though a little more off the beaten path, this area of the French capital lies in the shadow of the Eiffel Tower (7th arrondissement) and boasts attractions such as Tour Montparnasse, boat bars, and a handful of secret museums. Here’s your ultimate guide to the best things to do in the 15th arrondissement of Paris.

Where is the 15th arrondissement?

What is the 15th arrondissement known for?

The 15th arrondissement is most famous for being a largely residential district and is home to around 240,000 residents. The area is known locally as Vaugirard thanks to one of the main boulevards which cuts its way through the heart of the neighbourhood. As a primarily neighbourhood area of Paris, the district boasts plenty of wonderful boulangeries, markets, and restaurants.

Best things to do in the 15th arrondissement

If there’s just one thing you need to know about the 15th arrondissement, it’s this: there is perhaps no other district in Paris where you can better see the Eiffel Tower. From around almost every corner (and every corner café), there’s views of the Iron Lady to be spied.

Straddling the 14th and 15th arrondissements, Tour Montparnasse is one of the tallest structures in Paris, second only to the Eiffel Tower. Though one of the less aesthetically pleasing buildings in Paris, the top few floors of the structure offer beautiful Parisian vistas, particularly if visited around sunset. Purchase your Montparnasse Tower here in advance.

There are actually several islands in the Seine, the larges of which is Île de la Cité, which is home to the likes of Sainte Chapelle and Notre Dame Cathedral. The third-largest island of the River Seine is that of Île aux Cygnes, in the 15th arrondissement.

Rather confusingly this man-made Seine isle shouldn’t be confused with ‘Île des Cygnes’ an island which has since been absorbed into the mainland of Paris proper and now forms part of the 7th arrondissement of the city.

Today, this Seine island is uninhabited and is instead a place where visitors and locals alike will discover a quiet park that seems far away from the hustle and bustle of busy city life. Perfect for a run or stroll, the green space is best seen in the autumn when the fall foliage is all golden views and beautiful hues.

One of the more unusual bridges in Paris is that of the Pont de Bir Hakeim which stretches across the River Seine between the 15th and 16th arrondissements. This double decker bridge accommodates an open-air portion of the metro and the ground level portion of the bridge provides passage for cyclists, pedestrians, and motorised vehicles.

There are actually several Statue of Liberty replicas dotted across the city, with the largest (and oldest) being located in the 15th arrondissement of Paris. This Statue of Liberty is a quarter of the size of the original on Ellis Island in New York.

The Statue can be found on Île aux Cygnes which is a manmade island in the heart of the River Seine. However, unlike the original Liberty of Ellis Island, this Statue of Liberty cannot be visited by the public and can only be admired from via the bridge.

One of the most relaxing parks in Paris is that of Parc André-Citroën, which is located on the edge of the 15th arrondissement. Founded in 1992, and named after André Citroën (yes, like the car!), the park is located on the site of a former Citroën factory.

At its opening, it was one of the largest parks to have opened in the city in more than a century. Today, the park boasts several unique highlights, the best of which is probably the hot air balloon in the heart of the park.

The hot air balloon can fit up to 30 passengers and rises up to 300m into the air (though it tends to stick at 150m). This makes the Ballon Generali is one of the highest viewpoints in the city, second only to the Eiffel Tower. Each year the balloon welcomes 50,000 visitors, for a small fee, into the clouds above Paris.

If you’re wondering what to do in the 15th arrondissement when it rains, then we have you covered. After all, the area is home to a myriad of indoor attractions which are perfect for a rainy day in Paris.

One of the more modern additions to the 15th arrondissement of Paris is that of the Beaugrenelle shopping centre (nearest metro lines 10 Javel, 10 Charles Michel and 6 Bir Hakeim), which in turn is one of the largest shopping malls in inner city Paris. In total, the shopping centre boasts around 120 shops, eateries, and restaurants.

One of the more open-air delightful shopping streets in the 15th arrondissement is that of the one-way rue du Commerce. Home to artisanal boulangeries, boutiques, and other specialist food shops, the road runs between Boulevard de Grenelle to the church of St Jean Baptiste de Grenelle.

One of the better kept secrets of the 15th arrondissement is that of the church of Saint-Seraphin de Sarov. Wooden exterior and beautifully ornate interior, the first church on-site was actually not constructed until the 1930s and was consecrated in 1933.

Funded by many small donations from local residents of the 15th arrondissement, the Russian Orthodox chapel features a pretty interesting interior! After all, it’s not every day that you see trees growing in the very heart of an ecclesiastical building!

The church you see today was actually erected in 1974 on the site of the previous 1930s wooden structure. The church is important to those who fled to Paris during the Russian Revolution on account of their loyalty to Tsar Nicholas II. Ever-so-unique for this part of Paris, I highly recommend checking it out if you’re in the area!

Yet another church which is a little off the beaten path in the 15th arrondissement is that of St Jean-Baptiste de La Salle’s Church. Named for 17th-century born Saint-Jean-Baptiste-de-La-Salle, the church was constructed in 1909 on the site where there were disused buildings from the Guillout biscuiterie.

If you’re looking for a small and quirky Parisian museum that’s less frequented than the likes of the Louvre or Musée d’Orsay, then you might consider paying a visit to Musée Bourdelle. This cultural hub is set against the backdrop of the former home of artist Antoine Bourdelle, who was once a pupil of Rodin.

Today, the Bourdelle museum displays some of Bourdelle’s most famous sculptures and is truly a hidden gem within the confines of the péripherique. The museum is open from Tuesday through to Sunday and admission into the permanent collections is free!

Yet another rather unique museum in the 15eme is that of the Postal museum. A fairly niche and small museum, the Musée de la Poste has been in operation since 1946 and takes visitors through the history of the postal service in France.

One particular hidden gem of the 15th arrondissement that I once discovered quite by accident a few months ago when strolling around the area with my boyfriend is the Jardin Atlantique. An elevated green space on the rooftop of Gare Montparnasse, this tranquil area is home to a number of smaller subdivided ‘themed’ gardens.

Hands down, of all the cafés in the 15th arrondissement, O Coffee is simply the best for those looking for speciality coffees in a chic atmosphere. This café is open from Monday through to Saturday and serves brunch foods as well as snacks and sweet treats.

Throughout Paris, there are a number of ‘villages of Paris,’ which are small pockets of calm in the heart of the city. Typically featuring ivy-clad two and three storey buildings which are ever-so-different from the traditional Haussmannian architecture, Villa du Mont Tonnerre itself is a delightful photo spot.

Go in search of cherry blossoms at Falguière métro station

One of the lesser known places to enjoy all of the cherry blossoms in Paris during the springtime is at Place Camille Claudel, which can be found in the peaceful and quiet residential area of the 15th arrondissement of the city. This is where you’ll find the Falguière metro station (serving line 12 of the metro).

If you’re in search of vintage treasures, then one place where there’s a never-ending stream of second-hand goods, antiquarian books, and ancient wares to be found is at Puces de Vanves. Though admittedly smaller than the flea market of Saint Ouen, Puce de Vanves takes place on Saturday and Sunday mornings.

Yet another park in the 15eme that is well worth hanging out in if you want to find somewhere quiet and secluded in Paris proper is that of Parc Georges Brassens, which even boasts its own secret Parisian vineyard.

Opened to the public in the latter half of the 20th-century, the park is set against the backdrop of a former fish market, horse market and slaughterhouse and comprises of just under 8 hectares in size.

If you’re in search of a wonderful and fun place to grab a cocktail in the 15th arrondissement, then you need to head to ILVOLO rooftop bar, which is actually part of the Novotel hotel (find hotel details here) on the border with the 14th arrondissement.

Though the cocktails and wines are a little on the pricey side of things, the view is well worth it if you’re looking for a special occasion view. It goes without saying that, if you truly want to experience the best of the view, then you should be sure to head to the rooftop bar at sunset so that you get to see the Eiffel Tower transform from day to night.

Enjoyed reading about the best things to do in the 15th arrondissement? Pin this article now, read it again later: 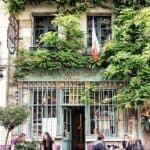 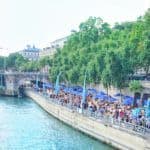 Everything You Need to Know Before Visiting Paris Plages! 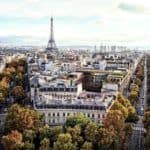 DON’T GO UP THE EIFFEL TOWER: INSTEAD, CLIMB THE ARC DE TRIOMPHE! 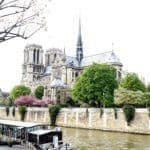