A smorgasbord of carb-filled delights awaits those who visit Paris, and on a wider scale of course, France. From buttery croissants to crumbling tarts, and fluffy as a cloud baguettes, there’s no shortge of boulangeries (the French word for bakeries) in the French capital. Here’s your ultimate guide to the best bakeries in Paris!

Truth be told, stop on almost any street corner and you’ll likely spy at least a handful of bakeries within eyesight. Paris boasts a staggering 30,000 bakeries (though, of course, some serve better quality fare than others) and even has its very own bread festival, which is typically held on an annual basis and celebrates the very crème de la crème of French baking.

Before visiting a French bakery, be sure to check out our guide on French boulangeries in order to pick up some essential travel tips to know before you visit. After all, one of the most common French daily habits is to pick up a daily baguette in the morning!

What to buy: Pain Poilâne – a delicious sourdough which pairs well with any savoury spread

If there’s one bakery in Paris that you should make it your mission to visit above all others, make it Poilâne, a brand which can be found at several locations dotted across the city. After all, this is probably one of the most famous bakeries in Paris.

I personally recommend visiting the location in Le Marais as this will allow you to visit plenty of other iconic attractions nearby and thus saving you time during your trip to Paris.

The most famous offering from Poilâne is the Poilâne bread which is named for the late baker, though there are plenty of other sweet and savoury options for sale in the store. Particularly special patisseries for sale include tarte aux pommes and a variety of seasonal delights depending on the time of the year.

What to buy: ‘Escargot’ – a Vienoisserie which comes in all sorts of delectable flavour combinations (I personally loved the pistachio rendition)

Just a short walk away from Canal Saint Martin (the chic waterway that dominates the 10th district of the city), Du Pain et des Idées ((literally translated into English as ‘Bread and Ideas’)) is so successful that it doesn’t even open on weekends! Indeed, it has to be said that this boulangerie serves up some of the best pastries in Paris…

The Parisian bakery was founded by Christophe Vasseur (who formerly worked in fashion) close to two decades ago as an artisan boulangerie serving up traditional breadstuffs with some unique twists.

Be sure to visit earlier in the day if you want your pick of the best sweets and baked goods. When things sell out, they’re typically gone for the day! For an extra special treat, consider taking your purchase to go so that you can sit by the water of Canal Saint Martin, just like the locals do!

What to buy: Cinnamon buns

Please note that as of late 2021, Circus bakery is permanently closed. Luckily, many of the same products that were for sale in Circus can now be found for sale in the Ciné Café in the Merci concept store in Le Marais.

Located along a little cobbled lane in the Latin Quarter of the city, an area so-called because during the Middle Ages students of the nearby Sorbonne University would converse with one another solely in Latin, Circus Bakery has been in business for a good few years now and is perhaps most famous for its delicious cinnamon buns.

For those who prefer savoury flavoured breadstuffs to sweet, the main offering from Circus is a crusty sourdough loaf. And if you’re looking for something a little smaller, then there are always several seeded rolls for sale.

Lin, sesame, pumpkin, sunflower, and poppy seeds are all to be found within the baked goods. I also love the lattés served up at this Paris bakery, though it’s worth noting that all of the goods are on the pricier side of things.

What to buy: Baba au Rhum- an alcoholic soaked sponge which finds its origins in France in Lorraine, to the eastern side of the country. The delicious sweet is actually said to have been originally created in its current store by Nicolas Stohrer, the founder of this Parisian bakery.

Illustrious, beautiful, and something of an insitution when it comes to Paris bakeries, Stohrer is the oldest still-in-operation boulangerie in the entirety of the capital, having been in business since 1730 when it was founded by Louis XV’s pastry chef.  Of all the bakeries in Paris, Stohrer may well be the most famous.

The scent of freshly baked pastries is ever wafting out of a certain doorway along Rue Montorgueil, one of the best semi-pedestrianised shopping streets Paris has to offer (No. 51 to be precise).

While the pastry shop itself is home to all manner of finely sliced sandwiches, intricately created desserts, and local specialities (the window display is almost always filled with traiteur (take out) goods), nearby you’ll find several cheese shops, fish vendors, and vegetable sellers.

What to buy: The rose praliné brioche

Recently opened at a location in the 6th arrondissement of the city, Liberté is as much a feast for the eyes as it is for the stomach (everything sold in this Parisian boulangerie is simply Instagram pretty) and there is even seating directly outside where you can enjoy your purchases surrounded by beautiful Parisian architecture while watching the world go by.

Despite rave reviews I was not entirely sold on their traditional baguette. Depending on where you are in Paris, the French bread can be priced from anywhere from 90 centimes to €1,50.

My local Parisian boulangerie sells baguettes at €1,10 and that of Liberté is priced at €1,20. With this being said, I absolutely adored the brioche praline roses and would highly recommend it to anyone wandering around the 6th arrondissement of the city.

Yet another sweet-themed bakery which you won’t want to miss on any trip to Paris is that of Aux Merveilleux de Fred. Situated in Le Marais, one of the most prestigious and historic parts of the city, Aux Merveilleux is well worth a visit whenever you’re in the area.

What to buy: Doughnuts (the clue is in the name!) Be sure to check out the special/ guest doughnut which changes with the seasons.

More of an American-style offering as opposed to a traditional French bakery (there are no savoury products to be found here!) Boneshaker Doughnuts more than merits its place on the list for serving up the very best doughtnuts

Situated in the ever-so-chic second arrondissement of the city, not far from rue du Nil and the illustrious semi-pedestrianised rue Montorgueil, Boneshaker Doughnuts sells brownies, coffees, and cookies (as well as donuts, of course!)

Though I’m often remiss to recommend chains, there is one chain of bakeries in Paris which deserves a second glance. BO&MIE can be found in several locations, including right by the Louvre Museum in central Paris.

I highly recommend all of their pastry products, though the bread is also well-priced and delicious too! Please note that the BO&MIE location next to the Louvre can’t sell breads on a Monday due to local bylaws.

What to buy: All manner of vegan sweet treats, though we particularly recommend the gooey cookie!

Though travel through France was once something of a nightmare for vegans and vegetarians, I’m pleased to report that this is definitely no longer the case! Indeed, there are now plenty of vegan eateries and grocery shops in Paris so you can indulge in countless cuisines cruelty-free.

One of the best bakeries in Paris which caters to vegans is that of Land & Monkeys, which now operates at two locations in the city. Though there is a boutique in the 14th arrondissement at Pernety métro station, the branch of Land & Monkeys that you’re more likely to frequent is that located in Beaumarchais on the fringes of Le Marais.

Step inside at any given moment and you’ll soon be greeted by the scent of freshly baked baguette and a wide array of sweet and savoury treats. As well as all kinds of vegan wraps and sandwiches, there are the usual vienoisseries (croissants, pain au chocolat), and salads.

I personally recommend taking your purchases to go and heading to the nearby Place des Vosges where you can enjoy a picnic style lunch while watching the world go by.

What to buy: American style cupcakes and cake slices. Cake slices are an extravagant €6, making this one of the most expensive bakeries in Paris on the list, but can easily be split into two portions.

Situated in the second arrondissement of the city, not far from rue Montorgueil, Stoney Clove Bakery is an absolute must-visit for those who enjoy American style baking and who want a taste of the USA while in the French capital.

Enjoyed reading about the best bakeries in Paris? Pin this article now, read it again later: 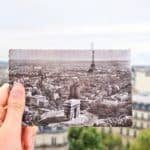 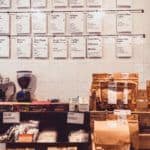 Where to Eat Vegetarian & Vegan in Paris 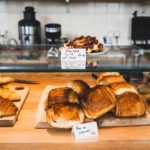 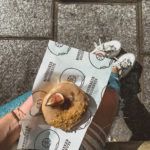 This is awesome! Thank you! Especially cause I’m headed to Paris next February.

Little tip though: Could you please include prices (or estimates) so that people looking to go in can also have an idea of what to expect, cost wise.

Outside of that, I’m glad I came across this!!!! Thank you

Thank you, I will update my guides shortly with rough price ranges! :)

30,000 bakeries, that's a lot! We can't wait to go to Paris (we've been putting off the trip because of Covid) and we will definitely keep your list of bakeries in mind. https://www.twinsgoneroaming.com/

This is necessary content !! Honestly I find Paris has a lot of mediocre bakeries, you really need to know what you're doing and where you're going. Haven't been able to go France since Covid but itching to get back and try some of these bakeries! Will bookmark this post :)