In the trendy, hip and vibrant 10e arrondissement of Paris, you’ll find it. Perhaps you’ll notice some locals playing boules in one of the sandbanks along the stretch of water, or maybe you’ll spot couples walking hand in hand along the river banks. This is Canal Saint Martin, an alternative destination to the Seine and where all Parisians in-the-know come to hang out…

Where is Canal Saint Martin?

Canal Saint Martin is in the heart of the 10th arrondissement, which in turn is one of twenty districts that make up the French capital. The area is located on the Rive Droite (right bank), which means that it’s to the North of the River Seine.

Far from the crowds of the Louvre and away from Paris’ most iconic River, the 4.6 km long canal stretches from the Canal d’Ourcq to the North, all the way down to the Seine in the south. The waterway was first constructed in the 19th century and is characterised by its straight stretches and iron-clad footbridges.

Completed in 1825, the purpose of the waterway was to increase the water supply in an ever-growing city with an ever-increasing need for freshwater. The Canal was first commissioned by Napoleon I in 1802 to not only increase the amount of freshwater available to the population but to also provide water for fountains and street cleaning.

Since the time of Napoleon, and around the same time that all of the Haussmannian buildings were erected, the canal has been covered between Rue du Faubourg du Temple and Rue du Temple, mainly for space reasons! Nowadays, the Canal Saint Martin is where the locals hang out.

From Bastille, there is just a short stretch before the water reaches the River Seine. Today, the canal is drained every ten to fifteen years to allow for cleaning. And when this area is cleaned, you’ll never guess what they find!

Apart from all manner of bicycles, old furniture and sweet wrappers, the most recent clean in 2016 revealed things like a giant wheelie dustbin and even street signs. Long forgotten and lost items also included motorbikes, children’s toys, and more shockingly, even a gun.

Things to do along Canal Saint-Martin

#1 Wander along the Banks of the Canal

If you’re looking for a lazy Sunday activity in Paris, then a stroll along St Martin’s water’s edge would be it. Filled with plenty of people-watching opportunities and ample space for Parisian-style picnics, head to the canal on a summer’s afternoon to waste away the day in a quirky spot in Paris.

#2 Board a barge and take a trip along the water

One of the quirkiest things to do in this hip neighbourhood is to get on a barge and take a boat excursion along the water. Filled with things to see, a float down the canal will offer an entirely new perspective on the neighbourhood.

While there are plenty of boat cruises to be taken along the River Seine, book a River Seine Cruise from Parc de la Villette like this one which will take you through Canal Saint-Martin.

Of course, one of the best times to visit Paris is during the autumn (particularly towards the end of October and beginning of November when the fall foliage is at its prettiest) when the days are crisp and there’s no better time to relax under the heaters en terrasse among friends. Well, Canal Saint-Martin is easily one of the best places to enjoy fall in Paris thanks to the sheer number of trees lining both sides of the waterfront.

All around Paris, you’ll find plenty of street art. From the well-known spray paint of Miss. Tic (plenty of her work can be found in the lost villages of Paris), to the ever-familiar Space Invader mosaics, the walls of the Canal Saint-Martin are quite literally awash with talent. In fact, the canal has inspired so many artists over the years that iconic names like Alfred Sisley have painted its watery depths.

If you’re as much of a fan as houseplants as we are, then you simply need to check out Plantes Pour Tous during your time in the 10th arrondissement. In general, the houseplants are incredibly well-priced for central Paris and are typically between €2 and €30.

If you’re a bit of a movie buff, then you may well want to take the time to wander both sides of the waterway, all the while searching for filming locations along its two sides. After all, iconic films such as Amelie (one of the heroine’s favourite activities is to skip stones along the water), Hôtel du Nord, Les Malheurs d’Alfred, and L’Atalante.

In other art forms, Edith Piaf (who once resided on nearby Rue Oberkampf) sang about the canal in her song ‘Les mômes de la cloche’. If you want to discover more of Edith Piaf’s Paris, then you can head to Père Lachaise cemetery in the 19th arrondissement, where the iconic singer is now buried.

#7 Go on a dinner cruise

Of course, you can go on Seine River Cruises, but if you’re looking for a more off the beaten path activity while in the  10th arrondissement, then you might consider booking a dinner cruise on Canal Saint Martin. For example, this cruise offers an on-board dinner, as well as live commentary of what the boat is going past. See full details here.

One of the things that France is most famous for is its cuisine, and perhaps most notably its cheese and wine. Well, it’s possible to book a cheese and wine tasting session close to Canal Saint Martin. Included in the experience is the opportunity to taste a selection of French cheeses which have been carefully paired with wines and some baguette. See full details now.

Open ’til late each evening, Le Comptoir General is like no other Parisian bar you’ve ever been to. Inside you’ll find great music, an eclectic museum, and even better cocktails. I don’t really want to ruin the surprise, so you should probably go for yourself!

The concept of this takeaway pizza place is as outlandish as its name itself. And the idea is this: order and pay for your pizza at the counter. Then, you’ll be handed a pink balloon to take away and then you’ll go and sit somewhere along the water. Then, your pizza will be delivered to you once ready!

Named just like the film of the same moniker, Hôtel du Nord bar and restaurant are located in a picturesque place along the water’s edge. Head there to experience some traditional Parisian cuisine, or simply enjoy a coffee! You can even book to stay in this three-star historic hotel. Find all the details here.

As its name would suggest, this plum coloured bar is upbeat and quirky. Always filled with the sound of lively voices and the gentle background hum of music, it’s a place to see and to be seen. Well-reviewed, the coffee is great while the menu changes daily, meaning that no two visits are ever the same!

Though this South American food chain has several locations across the city, one of the prettiest restaurant interiors is that found next to Canal Saint Martin. Wander inside and you can expect to find a menu consisting of quesadillas, tacos, and some of the most delicious cocktails I’ve tasted in Paris!

This quirky sandwich shop is a rarity in a city where most cafés and bars serve full courses, even in the middle of the day in the high heat of summer. It’s the perfect place to grab some food to go and head out along the canal to find a great spot to sit and eat.

If you’re looking for some of the best vegan food in Paris, then you’ll find it at Asian fusion restaurant, Tien Hiang. While everything on the menu is vegetarian, only one or two dishes aren’t vegan, meaning that a meat-free menu is available every day apart from when the restaurant is closed on Tuesdays!

Where to stay near Canal Saint Martin

If you’re looking for a cool, hip, and trendy neighbourhood in which to base yourself in order to explore the wider Parisian area, then you need to look no further. After all, Canal Saint-Martin has great transport links to the rest of the city and has a plethora of bars and restaurants in which to enjoy good food and drink during the evenings. Here are the best places to stay in Canal Saint-Martin (based on location and web reviews)

Situated in the ever-so-trendy 10th arrondissement of the city, this hotel offers amenities such as a flat-screen TV, gym, and breakfast for an extra fee. Check prices and availability here.

If you’re looking for mid-range accommodation with comfy beds and free WiFi, then it doesn’t get much better than Hotel Garden Saint Martin. Continental breakfast is available for an extra fee. Check prices and availability here.

For a true taste of luxury when in the French capital, be sure to book yourself into the Renaissance Hotel. This luxurious place to stay even features a restaurant with a terrace, gym, and spa. Check prices and availability here.

Visiting Canal-St-Martin and the best time to go

Although the Canal is not necessarily a must-see on any visit to the capital (if you’re a first time visitor to the city, then you’ll most likely want to see iconic sights such as the Arc de Triomphe and Eiffel Tower), the water is best visited in the summer months, when the air is warm and daylight lasts well into the evening.

Weather-dependent, late spring and early autumn are also great times to visit the canal. A trip to Saint Martin during the shoulder seasons will also ensure that you can avoid the crowds of Paris to the fullest extent, all the while maintaining the best opportunities for good weather. For more insider knowledge, check out my best Paris travel tips.

Due to its long length and the way the St Martin neighbourhood cuts through an entire swathe of Paris, there are plenty of metro stations to choose from when you visit! Gare de L’Est (Lines 4 & 7) Republique (Lines 3, 5, 8, 9 and 11) Jacques-Bonsergent (Line 5) and Goncourt (Line 11) are all nearby. Overground, the canal is close to the Gare de Nord train station.

If there’s one thing you should know about the 10th arrondissement, it’s that there are plenty of foodie spots surrounding the maze of streets that snake their way around the fringes of the water. As well as the previously mentioned places to eat at Canal Saint Martin, here are some of our top picks for where to ear in the 10th arrondissement.

Unfortunately, one of the best foodie spots in the 10e arrondissement is so popular and successful that it doesn’t even have to open on the weekend, which is when most people plan to visit the area.

Du Pain et des Idées (literally translated into English as ‘Bread and Ideas’) was founded by Christophe Vasseur (who formerly worked in fashion) close to two decades ago as an artisan boulangerie serving up traditional breadstuffs with some unique twists.

Though the boulangerie and patisserie is closed during the weekends, it remains one of the best bakeries in Paris. The true star of the show is that of the ‘escargot’ a viennoiserie which is so-called thanks to its circular shape.

The cool and trendy taqueria El Guacamole serves up a range of authentic Mexican food at incredibly reasonable prices. Easily one of the best cheap eats close to Canal Saint Martin, the best deal of all is to get the set menu which includes three soft tacos of your choice (though they’re all pretty delicious) served with a soft soda (also of your choice). 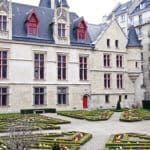 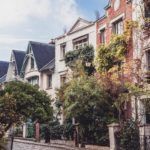 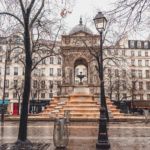