Ultimate Amsterdam Bucket List: Top Things to do in the Dutch Capital

A city steeped in history, architectural feats and rich in culture, there are few places that appeal to such a large audience as Amsterdam. Here is everything YOU should do: The Ultimate Amsterdam bucket list; where to eat, drink and shop and EVERYTHING you should see in the Venice of the North. 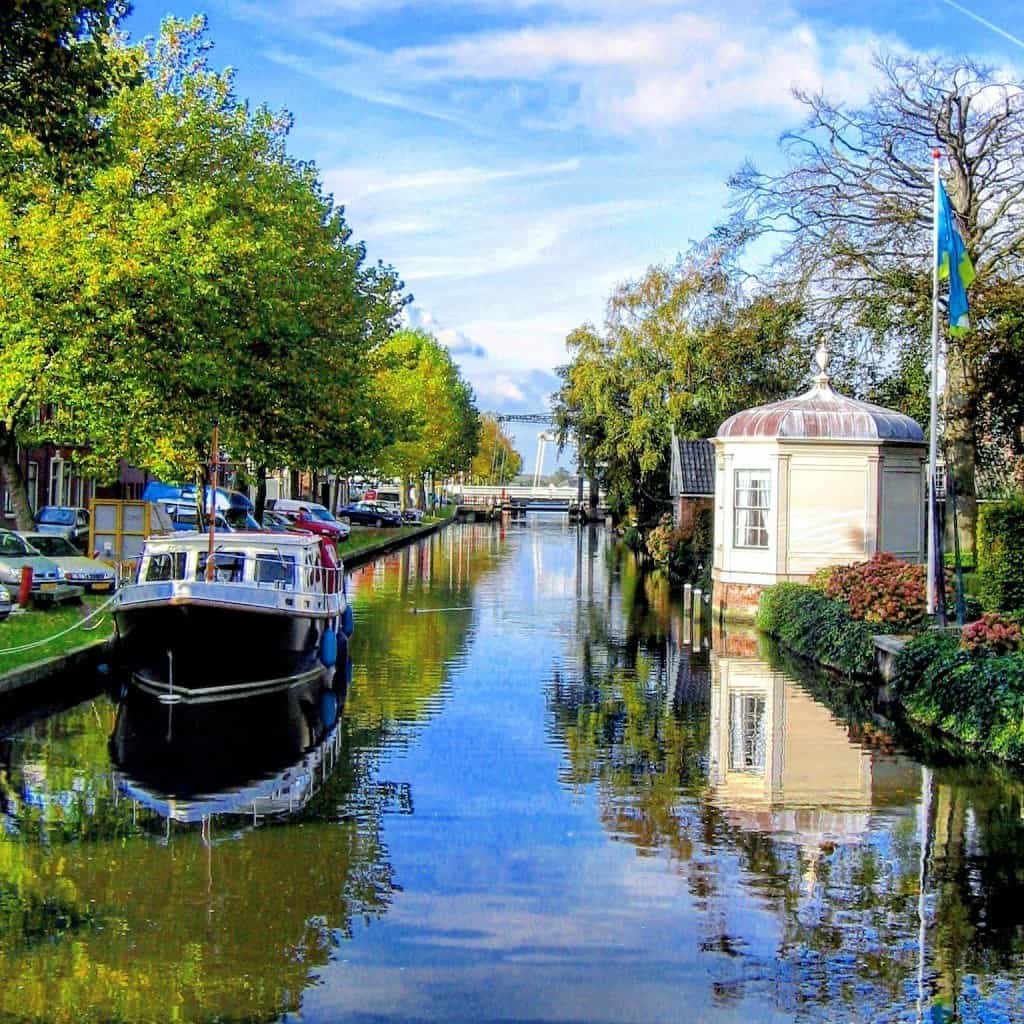 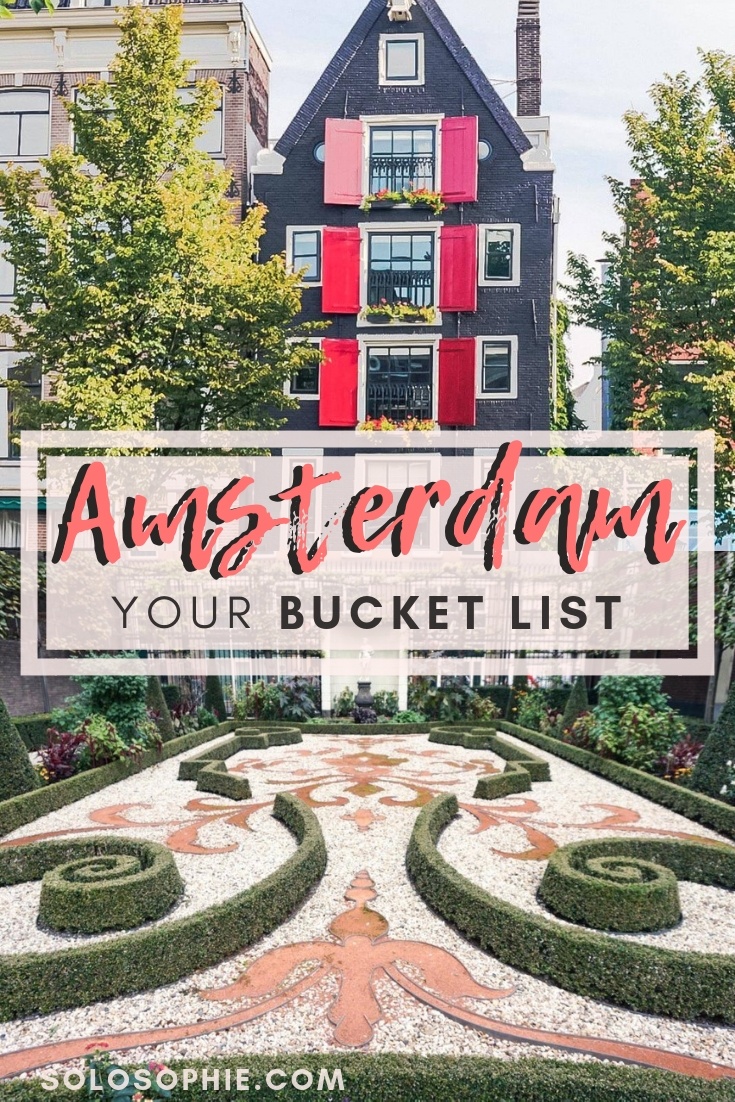 But first, here are some fast and must-know facts about Amsterdam, Capital of the Netherlands:

Amsterdam is the capital of the Kingdom of the Netherlands.

It is around 166 square miles.

The name ‘Amsterdam’ derives from ‘Amstelredamme’, meaning ‘dam over the river Amstel’.

During the 17th century, the city was the leading trader in diamonds and finance.

The Stock exchange located in the city centre is the oldest in the World.

Amsterdam is home to more nationalities than any other city in the World!

Amsterdam inhabitants are the second biggest consumers of coffee in the World. An average person consumes 3.2 cups a day; woah. 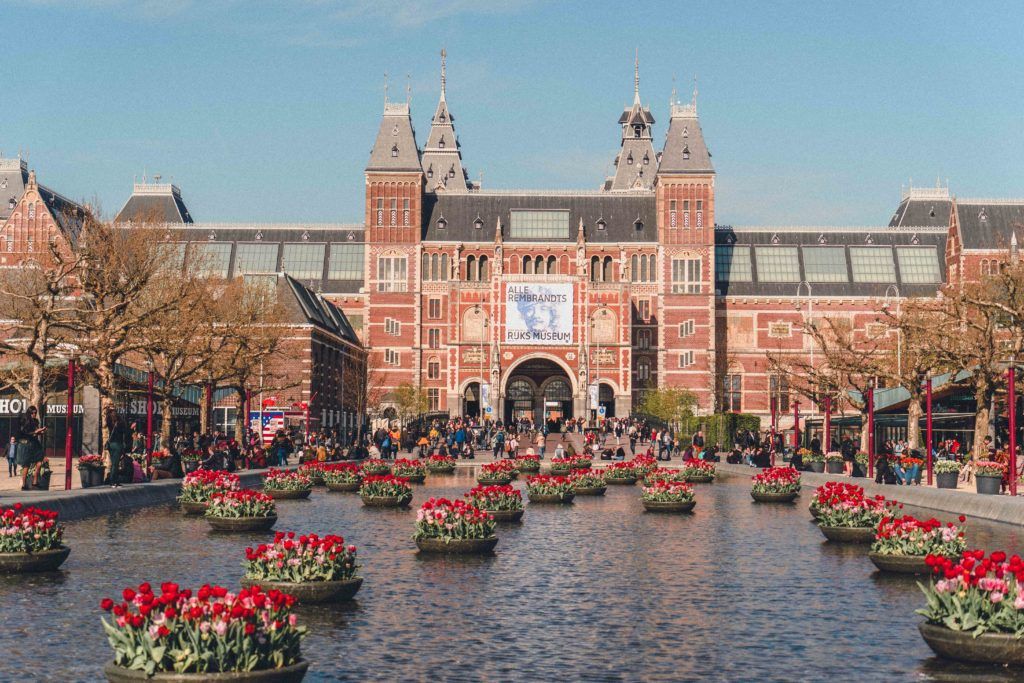 Even if you’re not a huge fan of museums, the Rijksmuseum is not to be missed. Where better to see old master paintings than in the Netherlands itself?! The Rijksmuseum is home to world-famous pieces such as the Night Watch by Rembrandt and the Milkmaid by Vermeer. Purchase your Rijksmuseum ticket here in advance.

Of particular note is that if you want to see Girl with a Pearl Earring then this Vermeer painting can’t actually be found in the Rijksmuseum. Instead, you’ll have to journey half an hour South of Amsterdam and to the beautiful city of The Hague. Home to all kinds of museums, bike trails, and its own history, it’s well worth a visit as a day trip from Amsterdam! 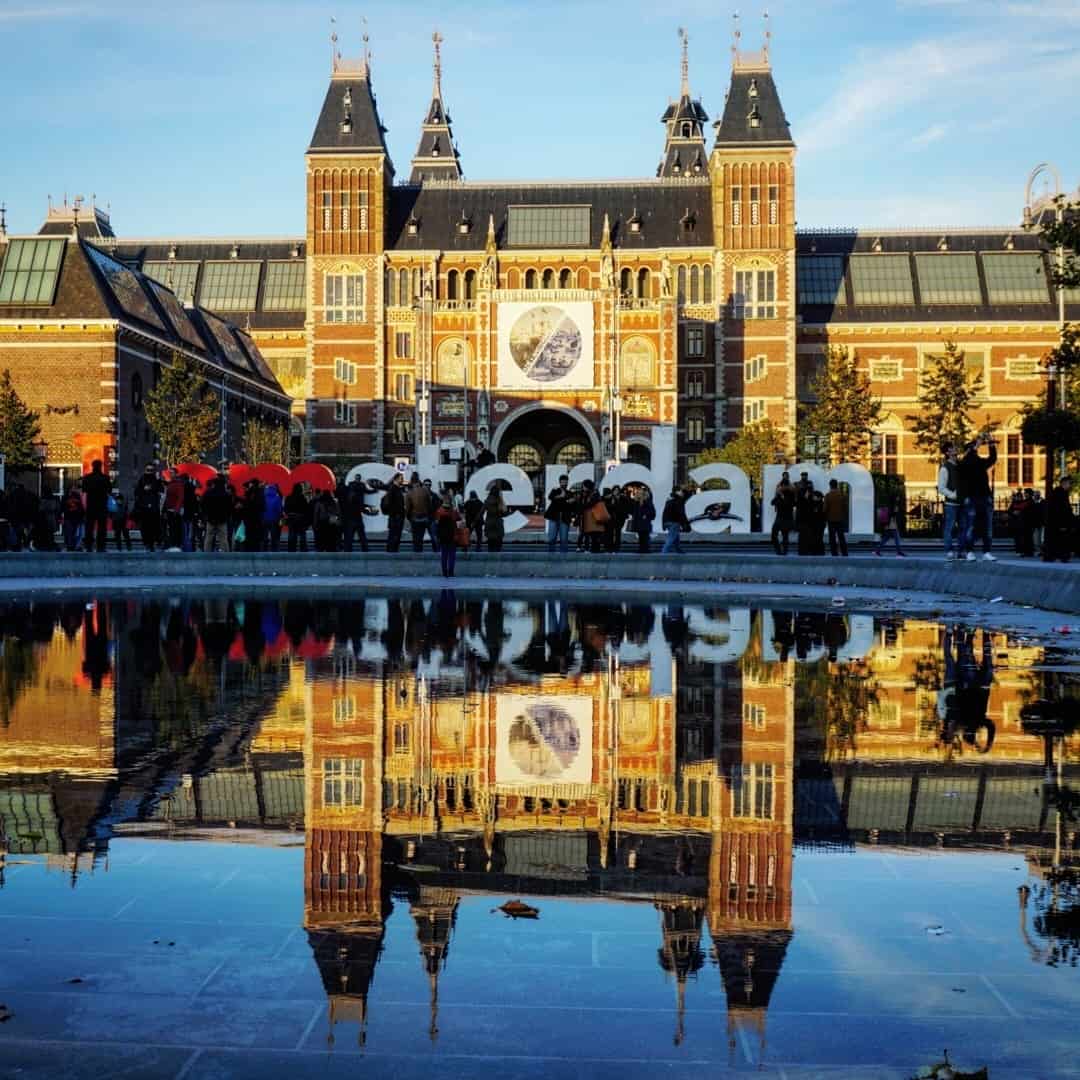 Paris may be known for its pastries, but Amsterdam is known for its waffles. Around every corner, there is a new opportunity to sample these delicious sweets. Dipped in chocolate, filled with fruit, there is a mass of varieties to choose from.

With more tulips than you can touch and a bouquet for every occasion imaginable, the flower market is really something that you have to witness first hand. Everyone knows that the Netherlands are famed for the tulip trade in the 16th Century. At the height of the trade, a single bulb could trade for more than the price of a house!

Free to visit, the feat of architecture that is the library is open from 10 am to 10 pm daily and welcomes over 2.5 million visitors every year! Once there, you’ll find speedy WiFi, shelves upon shelves of books, and all of the quiet space you could ever wish for from a busy city.

#5 Visit our Lord in the Attic

One of the most unusual churches I’ve ever visited, Our Lord in the Attic is one of the only survivors from a generation of house churches that sprung up in the 1660s. When Amsterdam became a Protestant city, Catholic churches were forced to go underground and so the easiest solution was to build churches in the top level of townhouses.

This was one of my favourite museums as you really get a feel for the history; you even have to wear shoe protection because the floorboards are so old! There are also plenty of other quirky museums in the city; here’s a quick guide to the best of small museums in Amsterdam!

Legend has it that the structure of Begijnhof this is the oldest house in the city; a pretty remarkable feat for a city founded in the 13th century! Built in the 15th century by sisters of a Catholic sisterhood, the site is now home to old houses, a chapel and a ‘hidden’ catholic church.

The world and their Grandma seem to have taken a picture in front of the I am Amsterdam sign! However, it seems to be a requirement for visiting the city and no trip to the Dutch capital would now be complete without a quick snap or two!

As of December 2018, the I Amsterdam sign can no longer be found on Museumplein. Instead, as a result of over tourism crowding the area, the sign is on tour and can be found at various pop-up points all over the city. While you can still snap photos with the giant letters at Schipol Airport and Sloterplas lake in West, the set of letters that were previously outside the Rijksmuseum can be found touring the city. 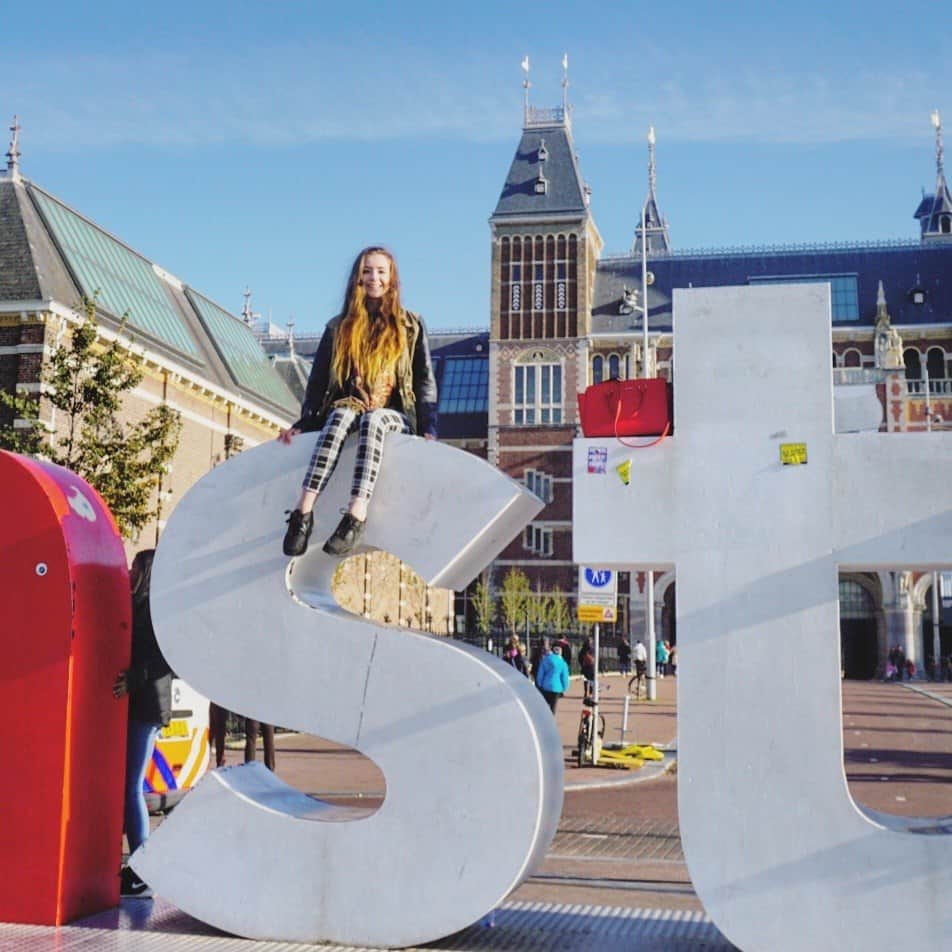 In a city famed for its wild nightlife, there are bars and clubs aplenty to choose from. Watch out though as although the legal drinking age is a lot lower, most clubs refuse entry to under 21s.

Home to Van Gogh’s self-portrait and that famous ‘Sunflowers’ painting, nothing quite compares with seeing a painting in real life.

A must for everyone on a trip to Amsterdam and a much-needed reminder that we must learn from history.

#11 Visit the Fault in Our Stars bench 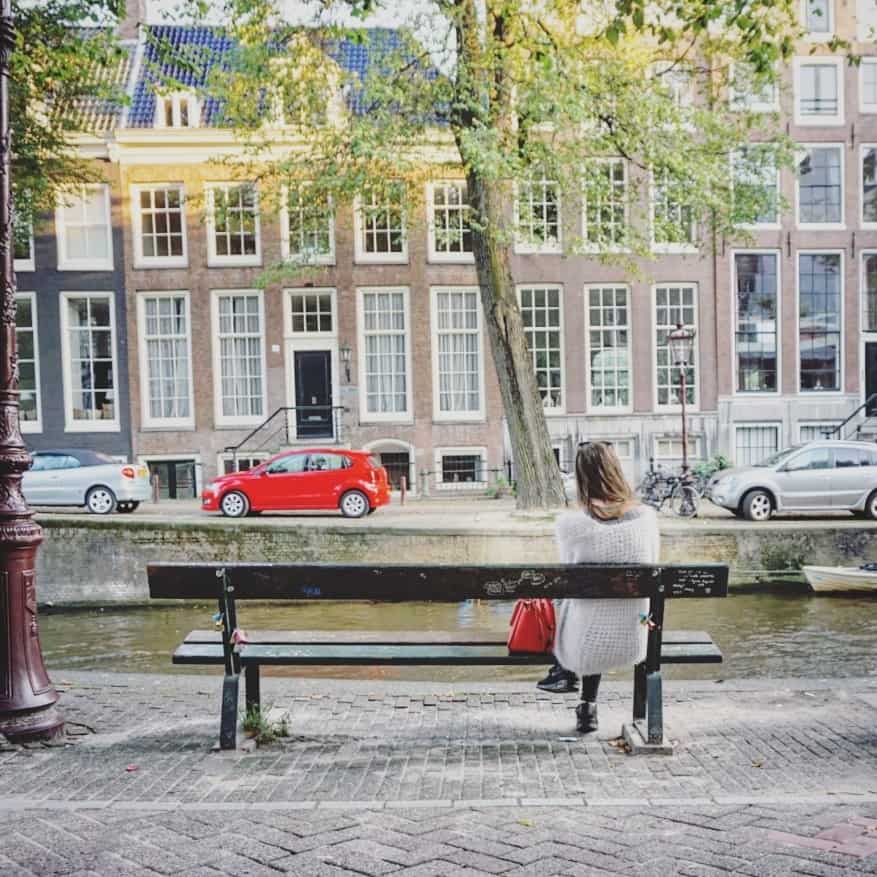 I love chess. You know what I love more than playing chess? Playing chess in giant format… There are a number of giant boards around the city with giant pieces to match! Of all the things to do on this ultimate Amsterdam bucketlist, this may well be one of the most quirky activities… but it’s also one of the most fun!

Easily my favourite district in the city, the historic houses that line the canals of Jordaan are prettier than a postcard! And so, if you’re looking to get a little more off-the-beaten-path and escape the crowds of the rest of the city, then I recommend heading to this ever so picturesque neighbourhood. Some of the best locations to enjoy in Jordaan include the Instagrammable café of Polaberry and many of the hidden Amsterdam hofjes to be explored in the neighbourhood.

Amsterdam is a city of bikes. It’s easy to rent a bike and even easier to spend a day riding along the hundreds of designated cycle paths the city has to offer.

There is always something going on in the main square in the city (and it is the best starting point for a walking tour as well!!)

#16 Discover the smallest house front in the city

Houses in Amsterdam are long and narrow because in the 16th-century people were taxed on the frontage (width) of their houses. The wealthier you were, the wider you could afford your house to be. Although there is a lot of debate as to which house is truly narrowest, the smallest houses in the city are barely a metre wide.

I think a lot of us are guilty of imagining the stereotypical tulip fields filled with thatched windmills when we imagine the Netherlands. Well, not to worry because there are genuinely many windmills to see (and photograph, of course)! 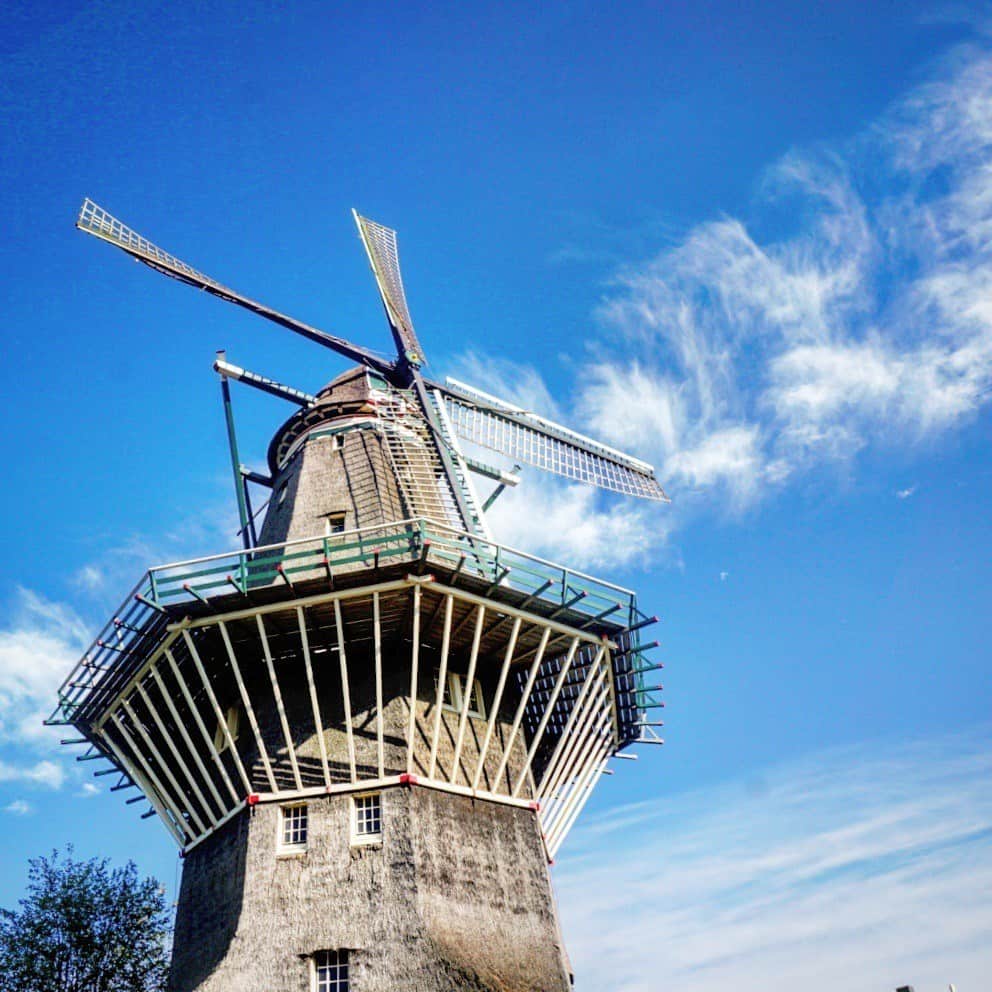 #18 Have a picnic in a Vondelpark

Take advantage of one of the many green spaces the city has to offer and enjoy a lunch ‘al fresco‘. Some of the other best parks to visit in Amsterdam include Westerpark (on land once owned by a coal-fired power plant, you can now find one of the city’s newest parks) and Amstelpark (here you’ll find all kinds of horticultural specimens).

If only to just pass through…

From pesto to paprika to goats cheese, there are more flavours than you could have ever imagined in your wildest dreams. The best part? You can sample as many as you like, ensuring that you can pick the best flavours to bring home with you!

With paint mixing and printing demonstrations, the house that the artist Rembrandt lived in for a large portion of his life is unlike any other museum that I’ve ever been to. It is a hands-on experience equipped with a guided audio tour. Purchase your Rembrandhuis ticket here in advance.

#22 Go to a Dutch Bar and drink Heineken

The Netherlands is home to Heineken and there are countless other speciality other beers on offer as well. While in the city, there’s also the opportunity to enjoy a visit to the Heineken Experience, an interactive tour of the world-famous brewery.

What you may not know, however, is that in a small Dutch city to the South of the Holland Province, that of Leiden, the Heineken Star sign actually originated. The story goes that the founders of Heineken loved the sign of the Café De Vergulde Kruik (The Gilded Jar Café) that they purchased the star for the princely sum of 35 guldens.

Finally, as a souvenir for yourself or a loved one, make sure to pick up a pair of clogs! For those who are planning a trip to Amsterdam, here’s your complete style guide and outfit inspiration ideas for what to wear in Amsterdam! 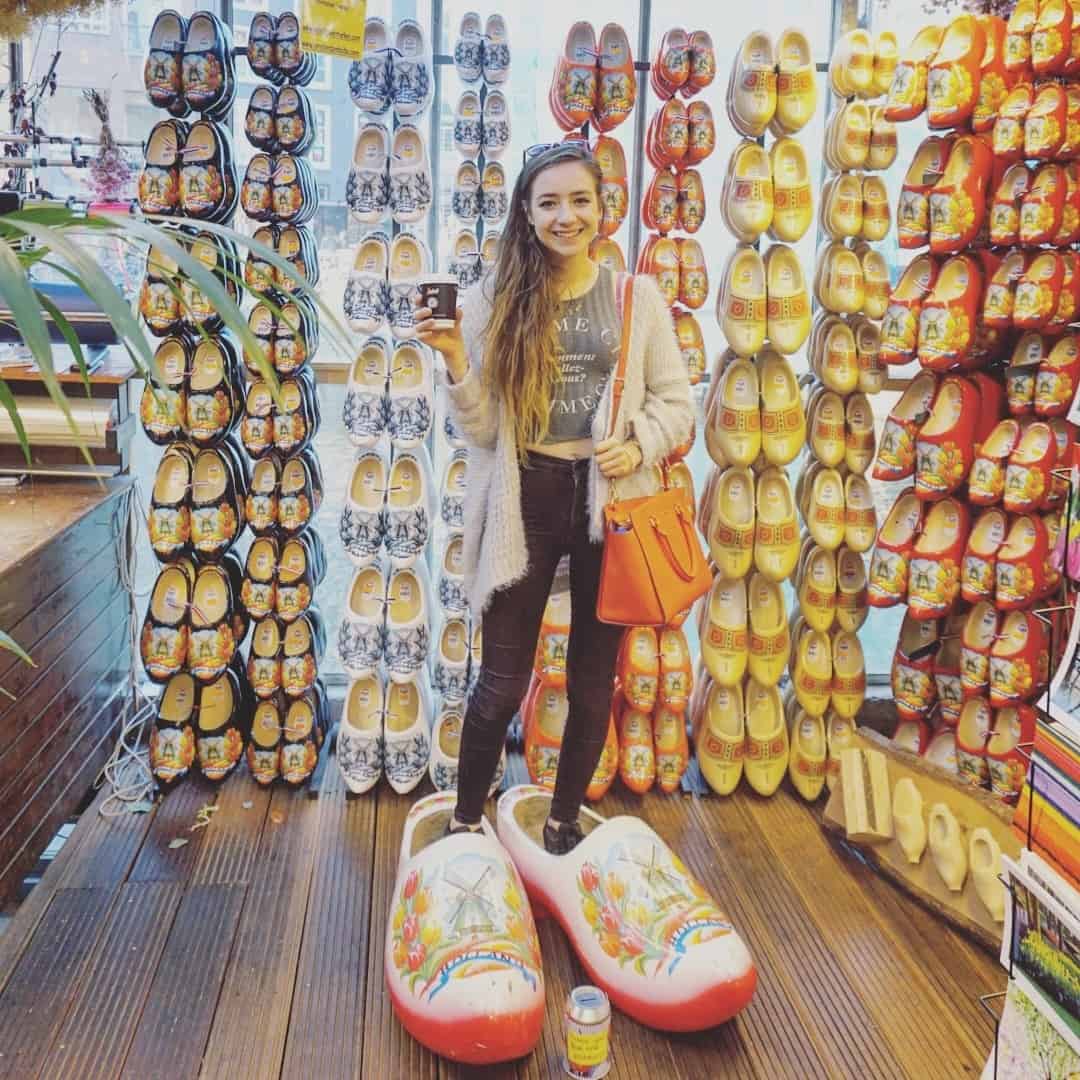 #24 Take a day trip from Amsterdam

While there’s a myriad of day trips from Amsterdam to suit every budget and itinerary, here are some of my favourites. Rotterdam is perfect for those who want to experience an architectural European city. Near flattened after the Blitzkrieg of WWII, the city has since been rebuilt in quirky and unique ways.

The cheese city of Gouda is so much more than the foodstuff that made it so famous! Once in this secret Dutch town, you’ll soon discover hidden house churches, endless canals, and even a windmill which still produces its own flour to be sold in the store next door!

Finally, should you visit Amsterdam during the Holland tulip season, you’ll soon discover that there are plenty of amazing florally themed day trips to be taken from the city. For example, Keukenhof is also commonly referred to as ‘the Garden of Europe‘ and is one of the largest flower gardens in the world. Buy your Keukenhof combi tickets here in advance.

Enjoyed reading about the best things to do in Amsterdam in this ultimate Amsterdam bucket list? Pin it now, read it again later: 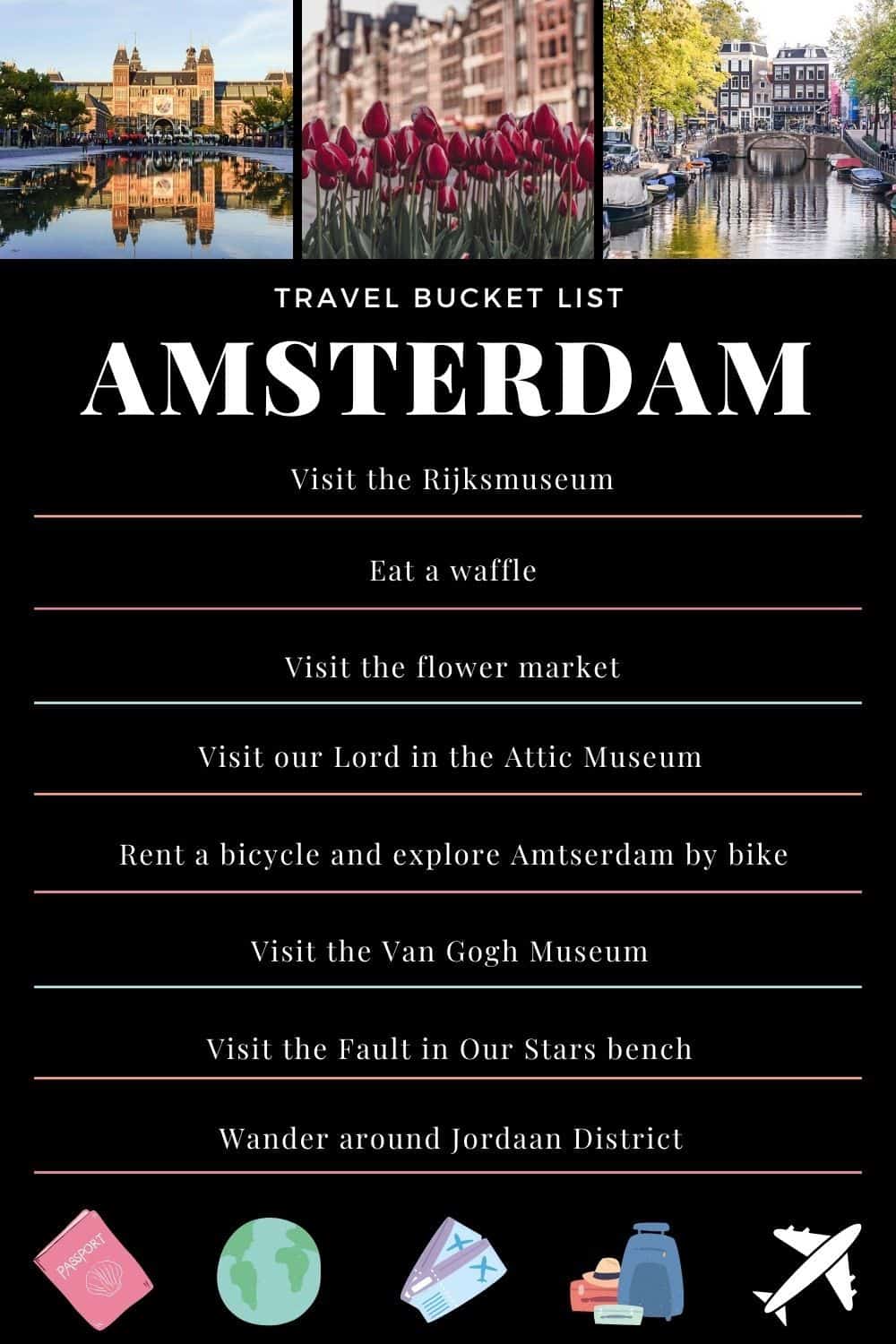 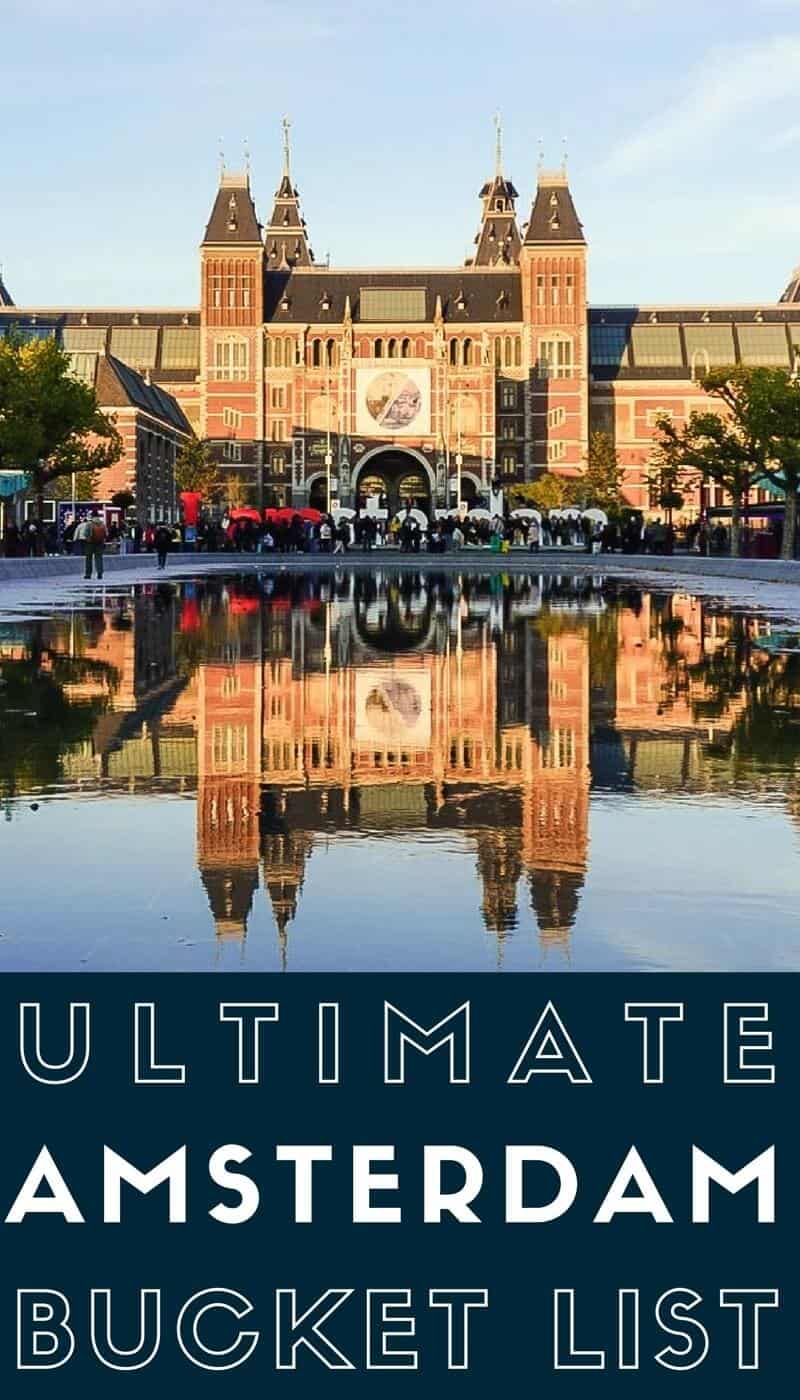 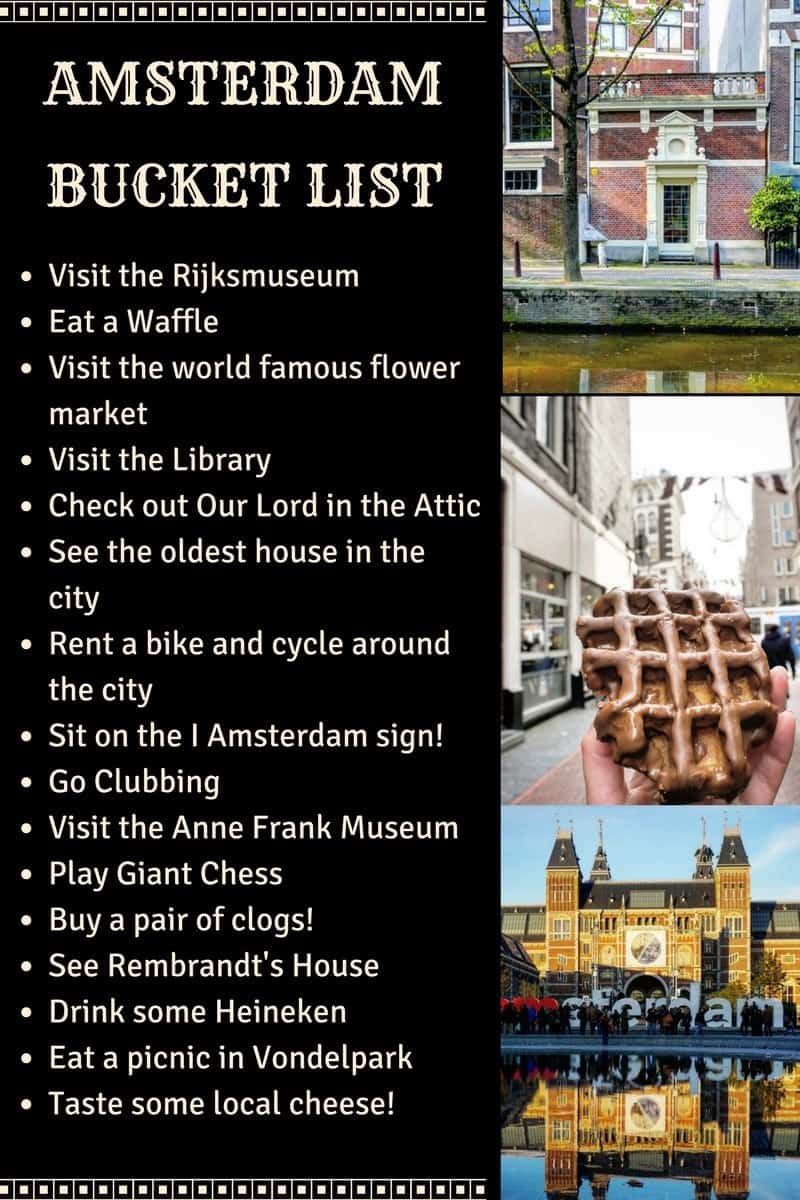 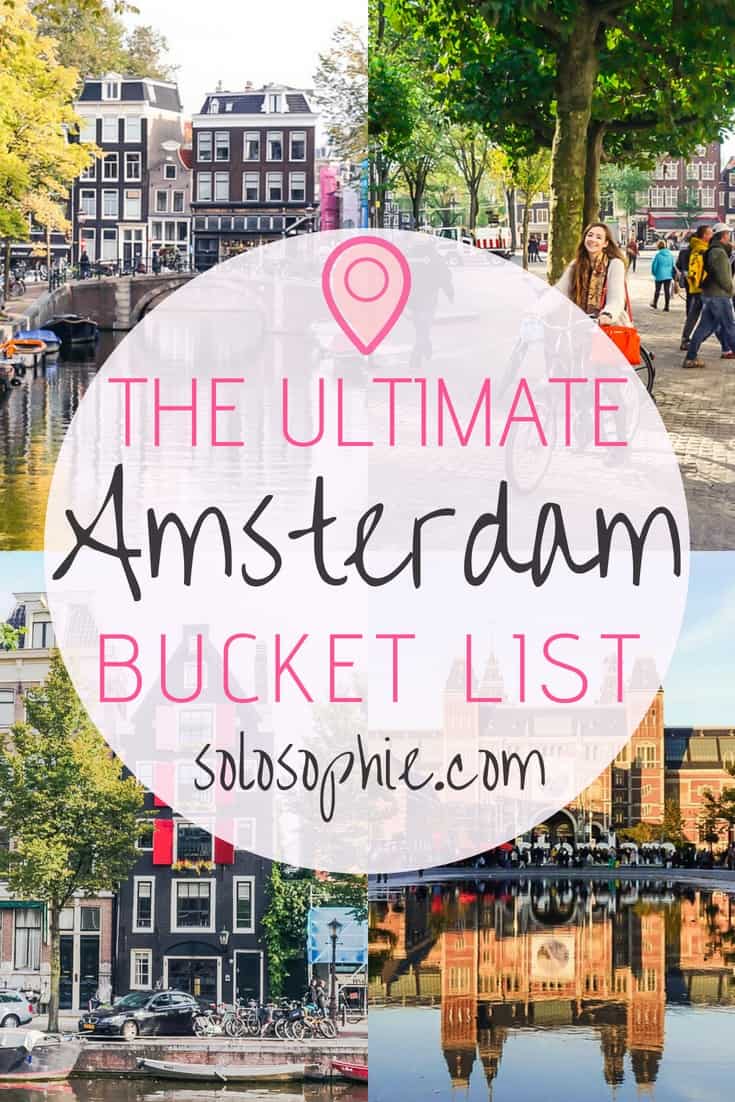 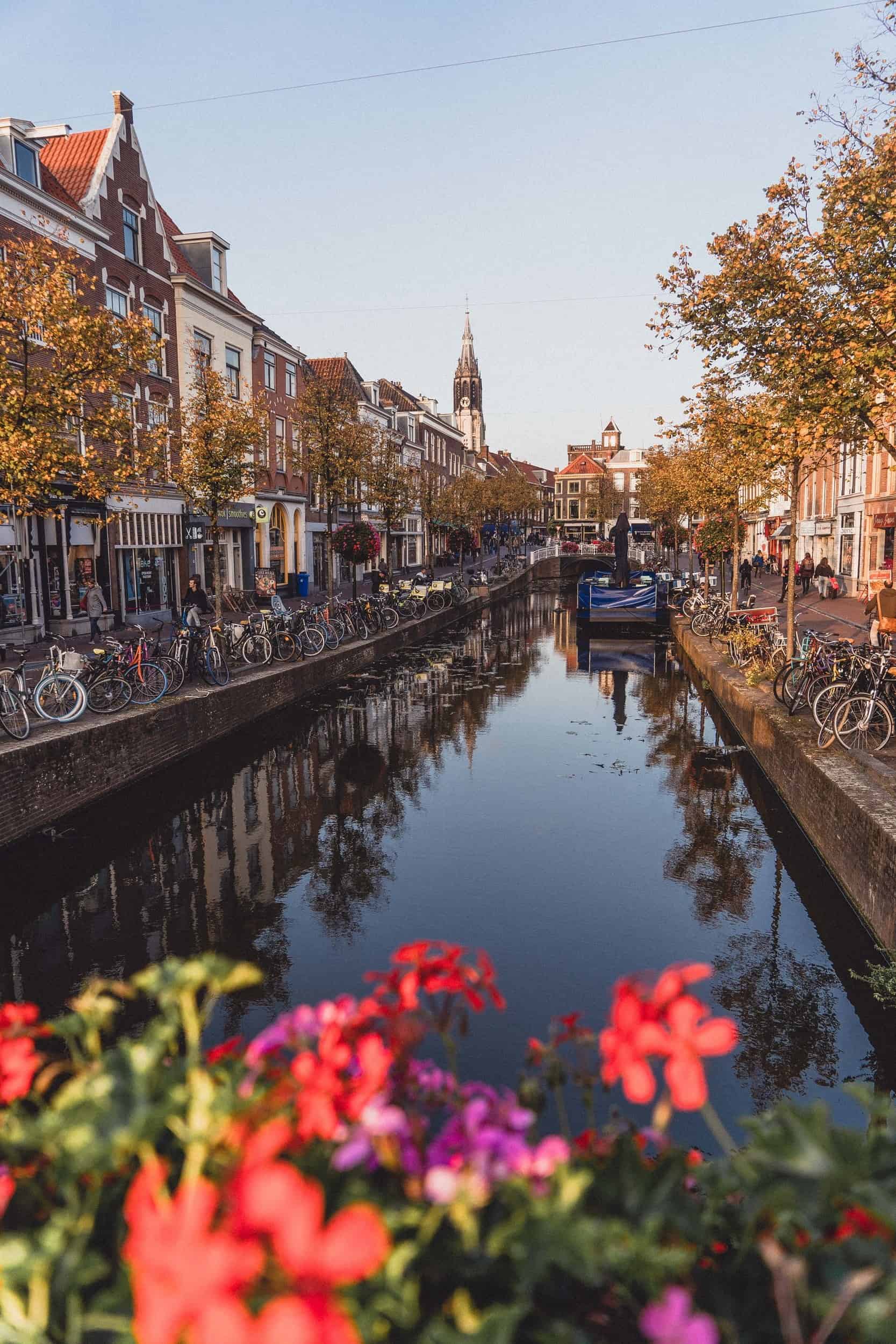 One week in the Netherlands: Travel Guide & Itinerary 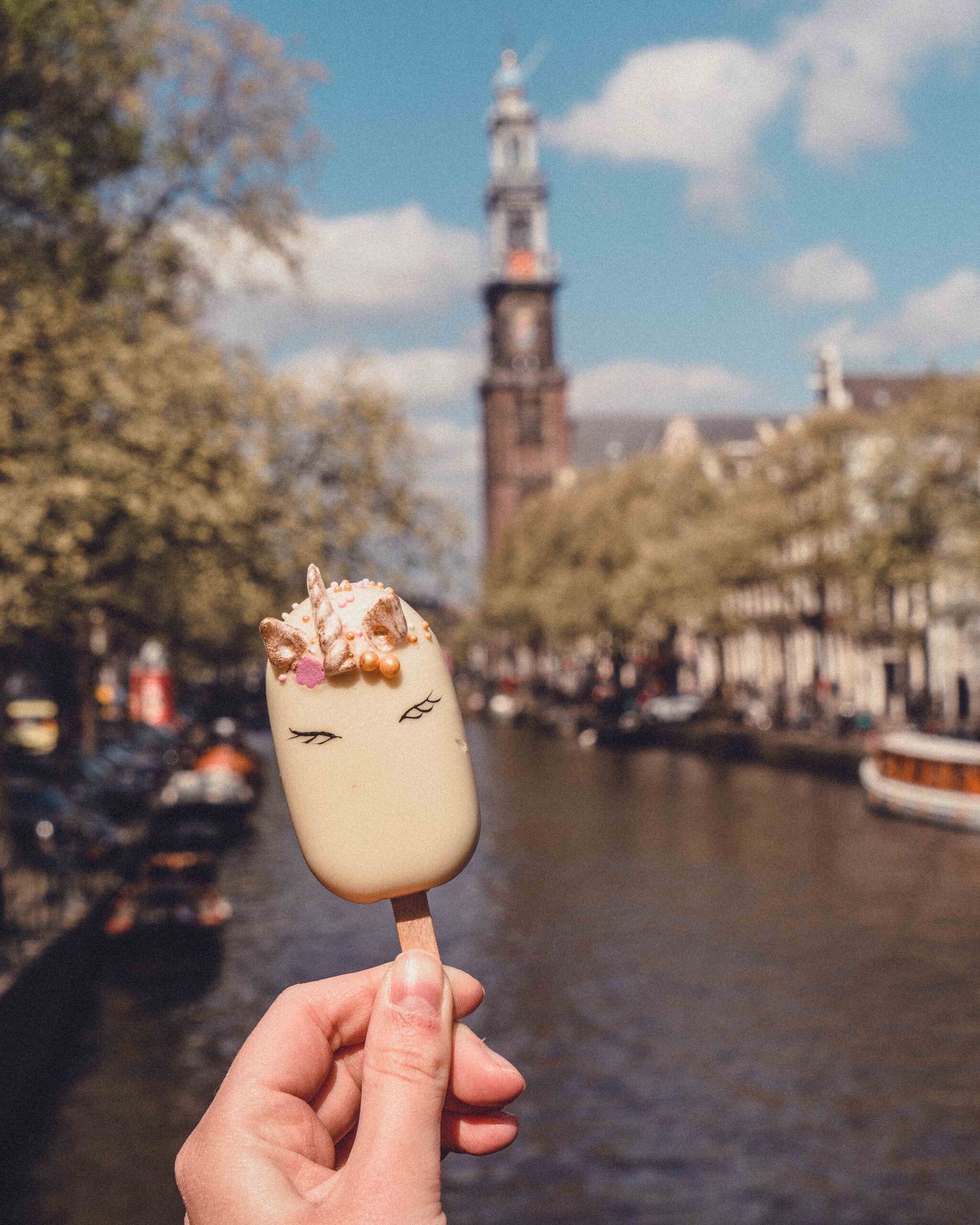 Polaberry: A Visit to the Most Instagrammable Café in Amsterdam 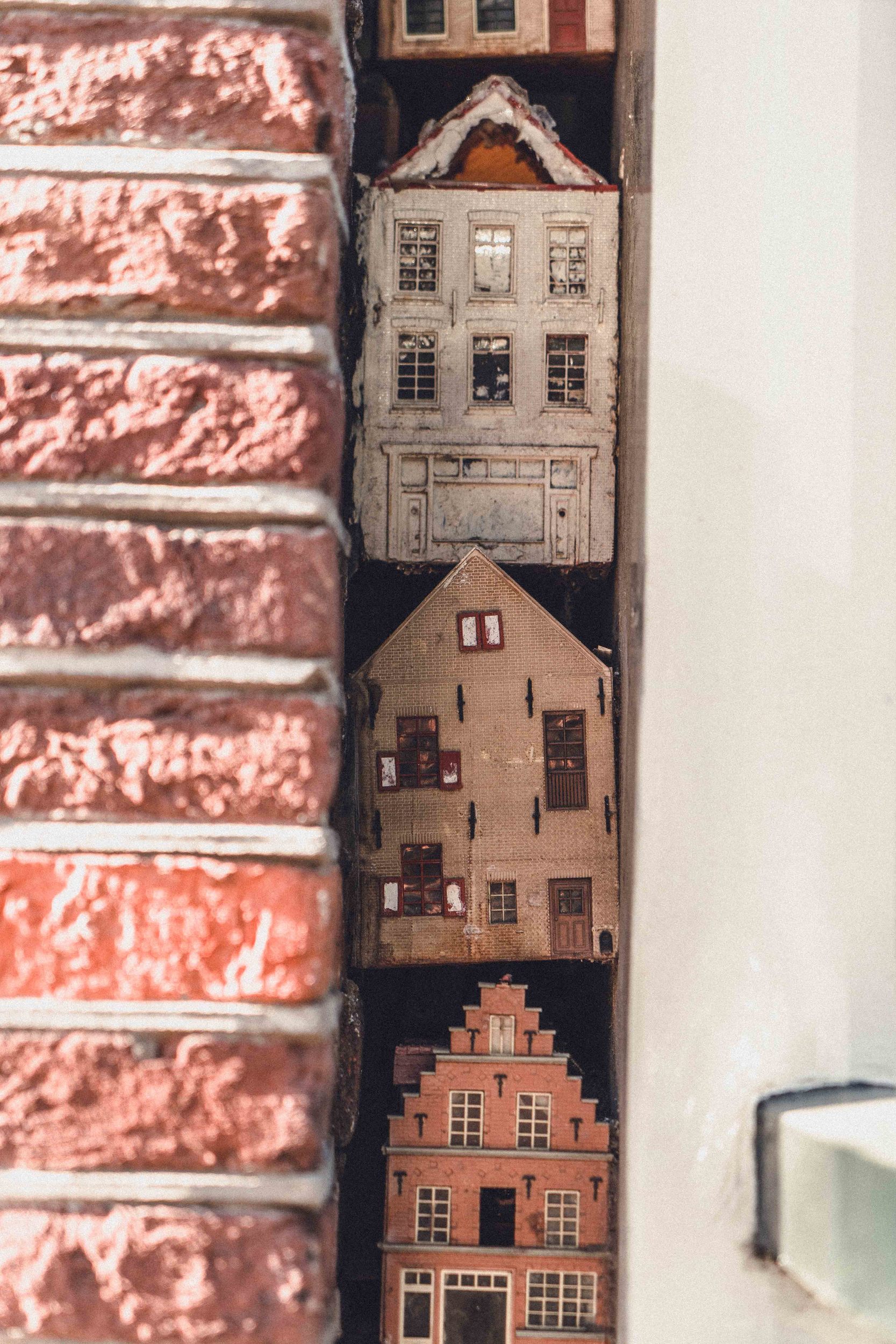