Amsterdam has long been sought after as a film shoot location. But one of the most recent, and one of the most prolific films in recent years has been the Fault in Our Stars in Amsterdam (TFIOS). Teens and older people alike are flocking to see where various scenes from the Fault In Our Stars were shot all across the Dutch capital city, AKA Amsterdam.

I literally can’t even convey how excited I am to share this post with you (probably has something to do with having only just turned an adult myself)! Ever since reading the book and watching the movie, I have been wanting to see all of the special spots that Augustus Waters and Hazel Grace visited! So here’s a quick guide to visiting the filming locations for The Fault in our Stars in Amsterdam:

The Bench from The Fault in Our Stars

Address | Leidsegracht 2 in the Canal District

Yep, you can go and visit that bench where the two lovers shared a particularly deep conversation. Suitably covered in graffiti from the book and some of the film’s most quotable lines, the bench mysteriously disappeared last year (or should I say was stolen?!)

However, not to worry as it is back in its rightful spot and officials have assured that it is the real bench from the movie. Read more about the disappearance here. Funnily enough, there also happens to be a second bench next to the famous one where someone has written ‘this bench is nice too‘.

Hazel Grace and Augustus Waters take tram number 4 in the movie. However, once you’ve taken one tram, you’ve taken them all. You can easily take a picture of the number ‘4’ tram outside of the main train station in the city centre. To be honest, all of the trams look pretty similar so I’m not sure if it’s worth taking a tram just to say that you’ve been on the same one as Hazel Grace!

Tram prices: 24 hours hop on/ hop off – €8. Alternatively, you can get free Amsterdam transportation by using the I Amsterdam city card, which is great value for money if you’re looking to enjoy the best of museums in Amsterdam, as well as discounts across a wide range of Amsterdam attractions and city transport included in the price.

Home to one of the most famous paintings the world over, ‘The Night Watch’, in actual fact, only the outside of the museum is featured in the film. The young lovers walk through the archways pictured below.

The archways are interesting to wander through as they go directly through the centre of the museum. Visit the pretty square behind the museum at any time of the year and you’ll soon discover that this is a pretty park with a sparkling fountain.

Augustus and Hazel share their first kiss here. Did you know that the set used in the movie was actually a reconstruction as filming in the attic is strictly forbidden. In fact, visitors on tours can only glimpse the attic through a mirror on the wall in the floor below.

The actual museum takes an age to queue up for to visit (but is definitely worth it and is one of the must-see places to visit in Amsterdam). I would recommend going early or later in the day as these periods are less busy.

At the end of the museum, there is a short film where influential and famous people are interviewed. John Green is interviewed in this video as one of the most famous scenes in TFIOS is filmed in the house.

Things to know before visiting Amsterdam for the first time

While you’ll be able to find English speakers pretty much anywhere you go in the Netherlands, you may well want to be prepared for situations where you need to know a little Dutch by taking a simple Dutch phrasebook with you.

With an increasing number of tourists visiting the city each year, the best hotels and guesthouses tend to sell out fast and so you’ll want to book your place to stay in Amsterdam well ahead of time.

Check the best accommodation prices in Amsterdam here. Alternatively, for those in search of a more unique experience while in the Dutch capital, consider booking to stay on a houseboat!

Enjoyed reading about filming locations for The Fault in Our Stars in Amsterdam? Pin it now, read it again later: 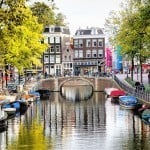 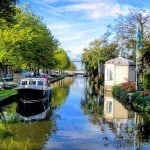 Ultimate Amsterdam Bucket List: Top Things to do in the Dutch Capital 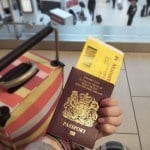 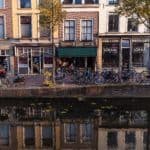 I recently watched the movie, it's really sad. I'd like to visit Amsterdam because of it not because of the movie but I've found before certain things in some places because I'd seen it in a movie:)