When it comes to exploring the Dutch capital, it can often feel as if no stone has been left unturned. From the dancing houses to the grand museums, the city has plenty of must-see attractions and can’t miss destinations. However, if you’re looking for an oasis of calm in the centre of the city, you can still hide away in some of the most beautiful Hofjes in Amsterdam, which are largely to be found in the Jordaan district of the city. 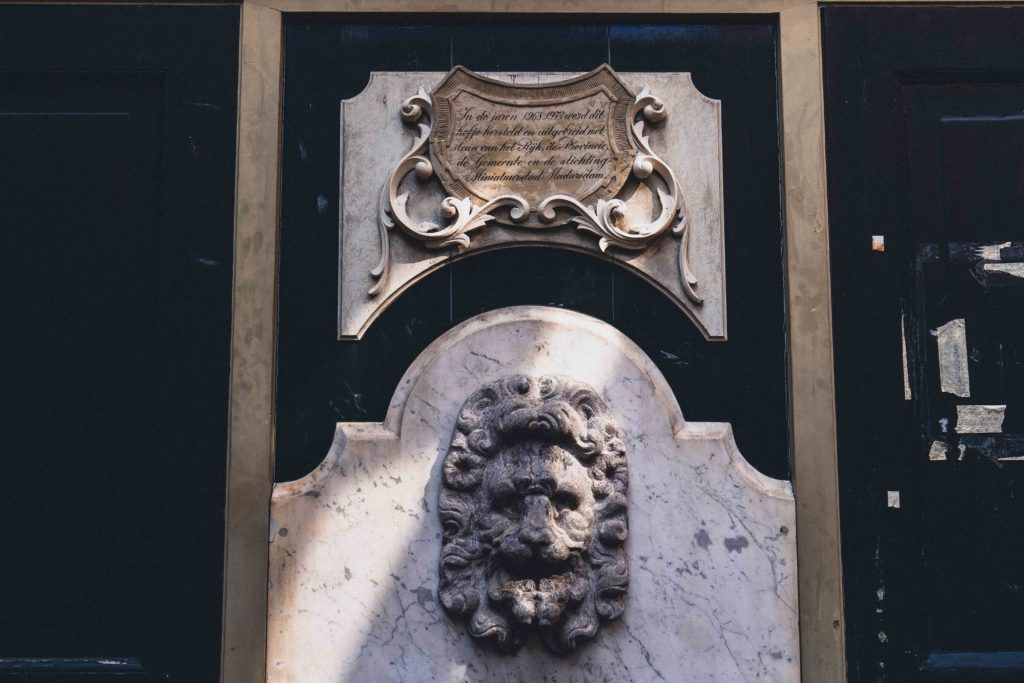 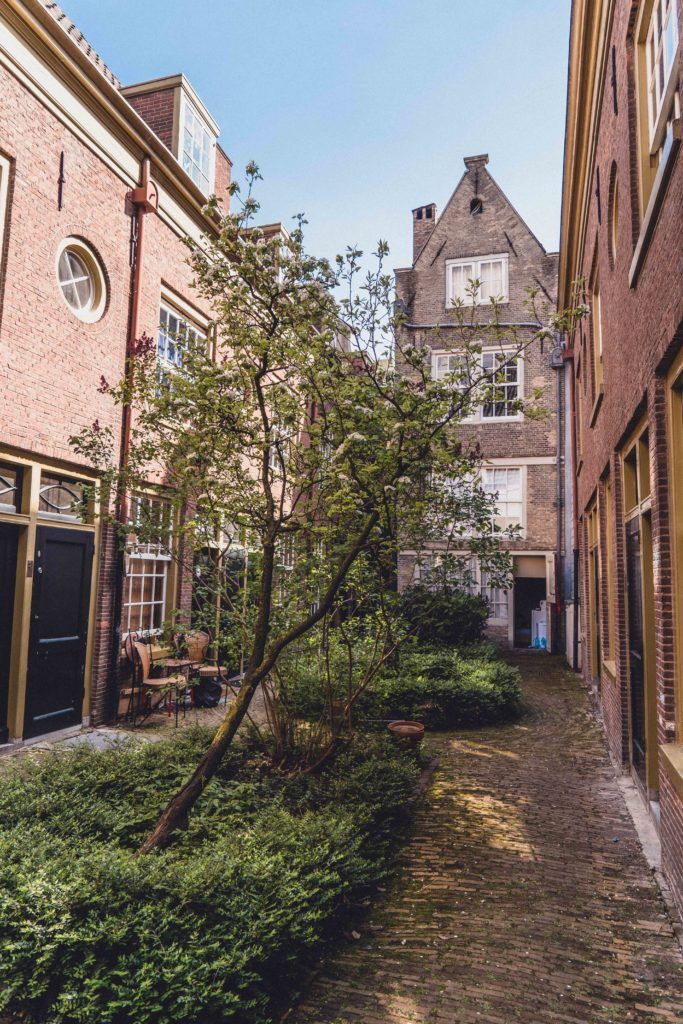 What are the Amsterdam Hofjes?

For those who wish to escape the crowds of the Rijksmuseum and get away from the mass of people who flock to the gingerbread houses of Damrak on a daily basis, the hofjes of Amsterdam are secret, obscure, and hidden courtyards that are filled with greenery and dotted throughout the city. 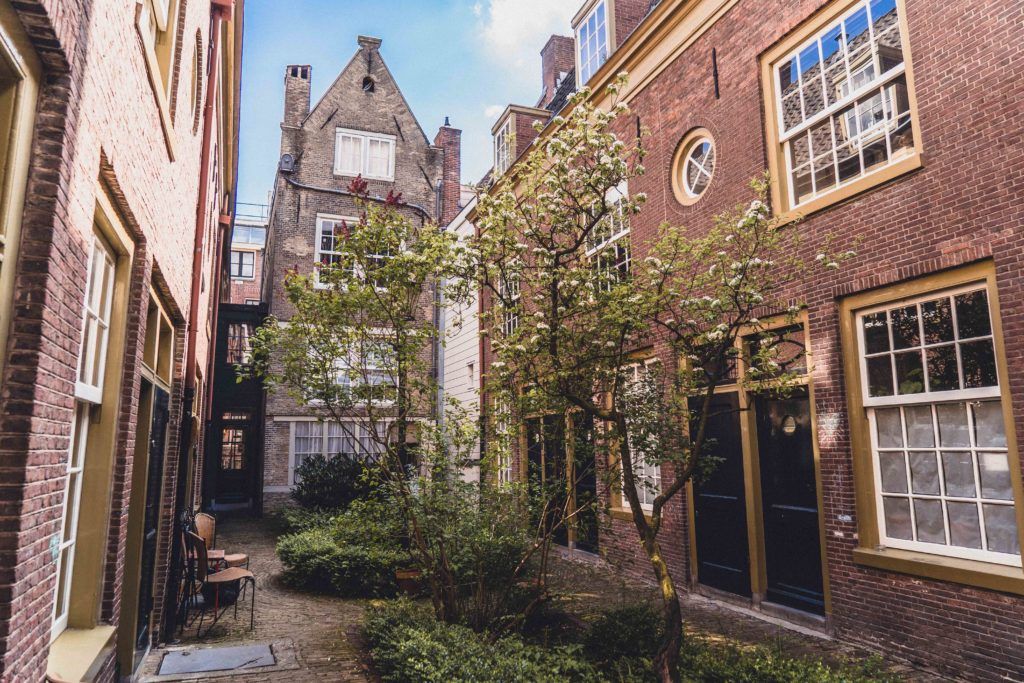 In existence since the middle ages, the Dutch word ‘hofje’ is used to denote courtyards surrounded by almshouses. Privately funded, much of the time these residences were once built to serve those most in need, and for the most part, older women.

In Amsterdam, these oases of calm are usually hidden behind grand canalside houses and many are still lived in today. The largest concentration of hofjes is to be found in the Jordaan district, which boasts just under twenty of these pretty courtyards, though there are around thirty remaining within the UNESCO canal belt.

There are currently a number that are free to visit and open to the public during select times. However, when visiting, just remember to be respectful and quiet. After all, these are still people’s homes! 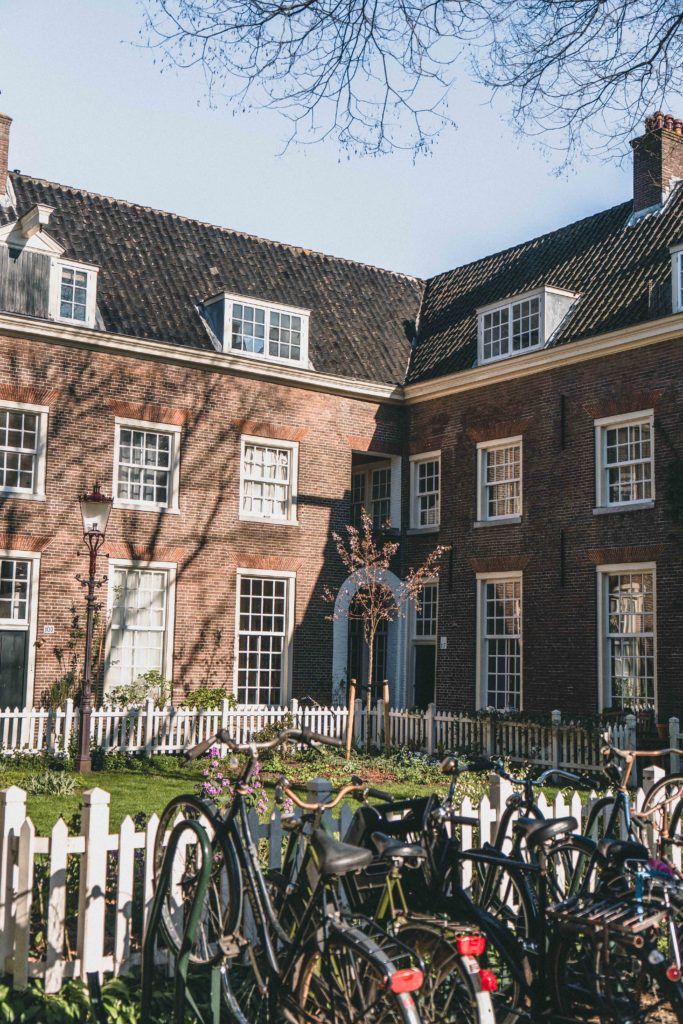 Of all the secret little courtyards you should know about, A little out of the way and close to the hidden gem that is the Mouse Mansion, a toy shop that sells mouse-themed children’s books based on a mini mouse doll series, the Claes Claez hofje is one of the oldest hidden courtyards in the city.

Today, this hofje differs from many of the others in Amsterdam in that the space is actually comprised of two hofjes which have since been interconnected via a narrow passageway. Zwaardvegershofje and the Claes Claesz (also known as Anslo’s hofje) are free to visit. 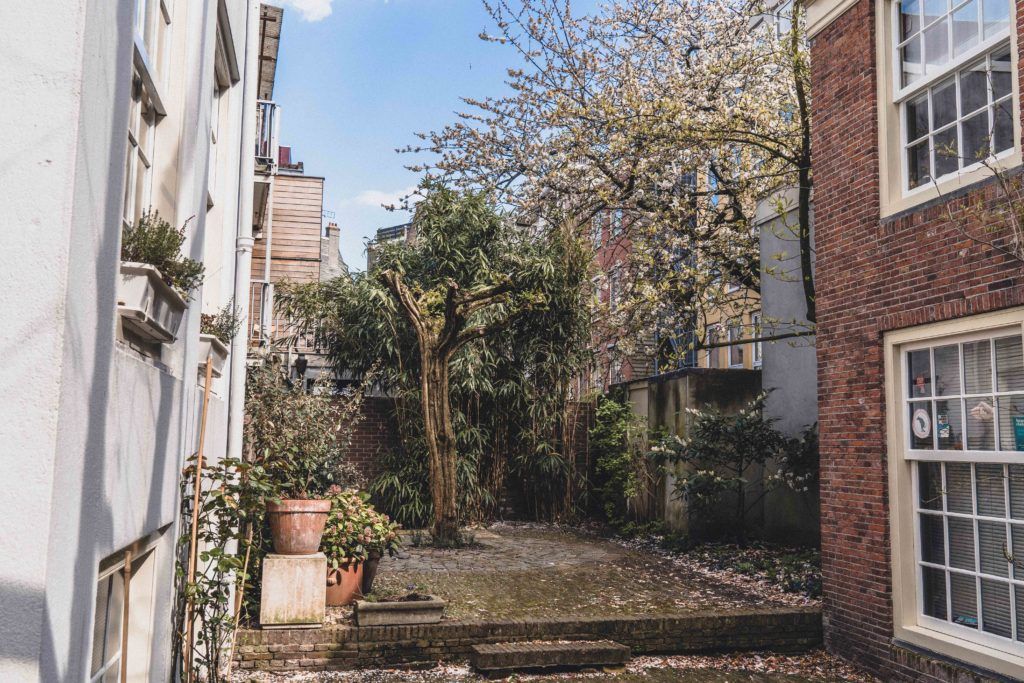 Tucked away down a little side street, the Karthuizerhofje is one of the larger Amsterdam hofjes that’s actually open to the public. Free to visit, head here and you can expect to find a wealth of beautiful plants, a trickling fountain, and plenty of benches on which to sit and relax.

Many of the buildings here were designed by Daniël Stalpaert, a renowned 17th-century architect who is best-known for his work designing the Royal Palace and the Oosterkerk. Like many of Amsterdam’s hofjes, once upon a time, this courtyard was the site of a Carthusian Monastery. 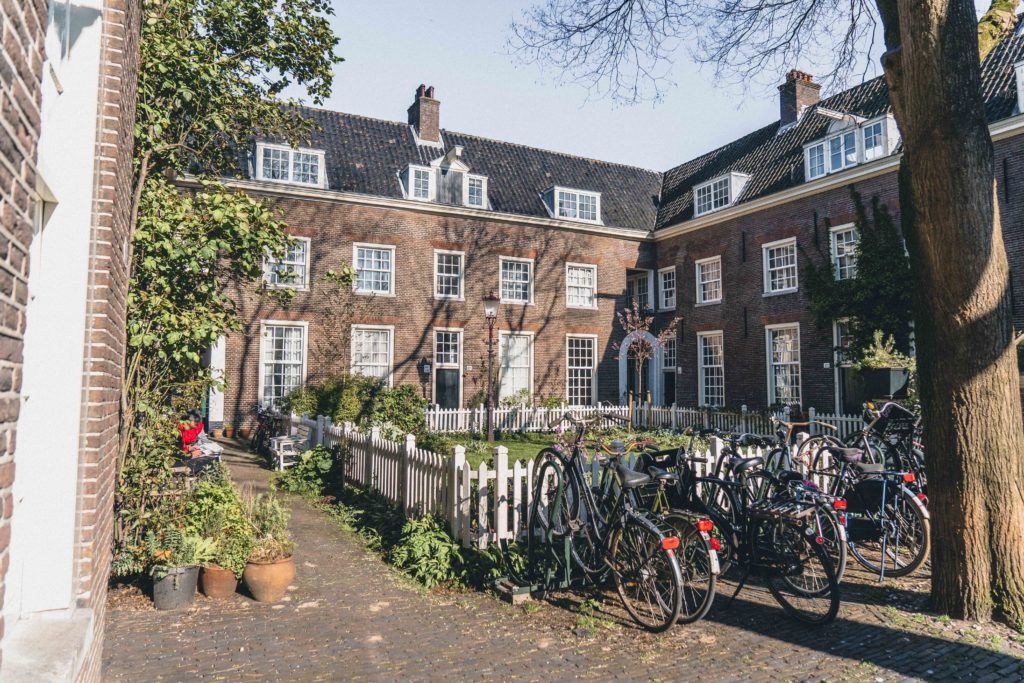 Filled with cherry blossom and just streets away from the ever-so-famous Westerkerk (i.e. the final resting place of world-famous Dutch painter Rembrandt), Zon’s Hofje was once where a Mennonite Church was found.

At that time, Mennonite churches were not allowed to have public frontage along the main road, and so they were hidden away behind the canal houses. As such, a long and narrow passage leads into the courtyard. Once called Sonnegang, it was later known as Noachsgang, and indeed a Noah’s Ark Gable Stone can still be spied in the courtyard today.

By the late 18th-century, the area had been transformed into housing for Mennonite women who were aged fifty or over. Wander into this secret spot now and you can expect to enjoy several picnic benches, tulips during the spring, and a relaxed atmosphere all year ’round. 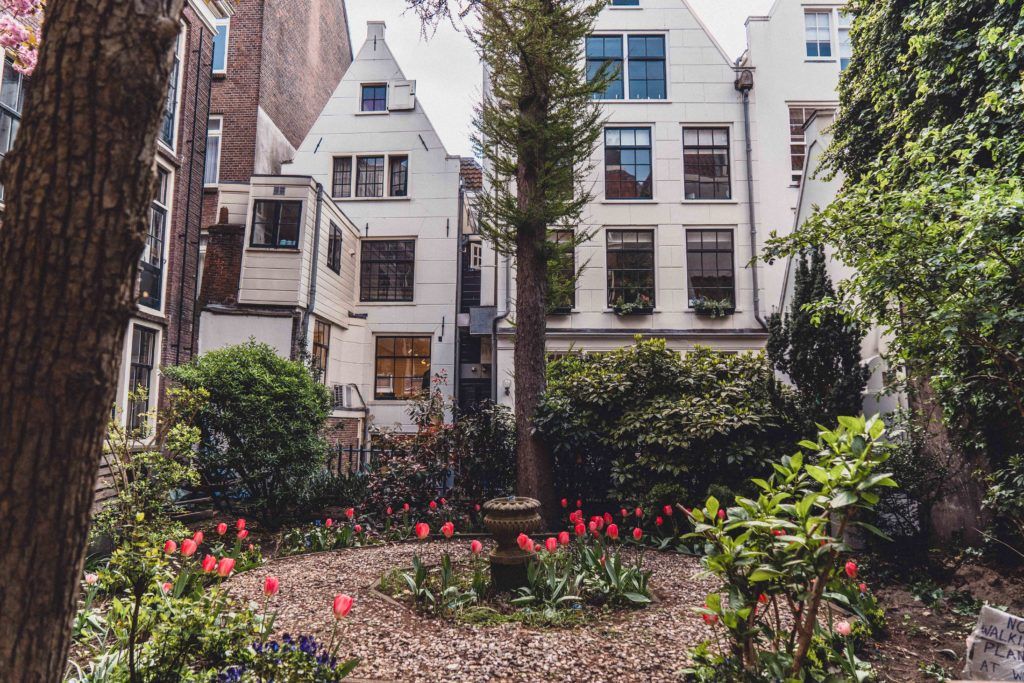 Just down the road from the ever-popular Zonshofje, the Hofje van Brienen is easily one of the most breathtaking courtyards in the Jordaan district of the city. Free to enter, we had this hidden gem all to ourselves when we wandered around mid-week during the late afternoon.

The history of this hofje traces its roots back to 1797 when a local merchant, Arnaut van Brienen, bought a house, storehouse, and brewery named the star so as to demolish the complex and transform it into a hofje. During the 19th-century the space was used to house up to twenty couples and six men.

While the downstairs floors were in use as living accommodation, the upper floors were rented out as grain lofts. Now, Van Brienen can be visited throughout the week and features several well-manicured box tree displays. Nearby, the protestant Noorderkerk dates back to the 17th-century. 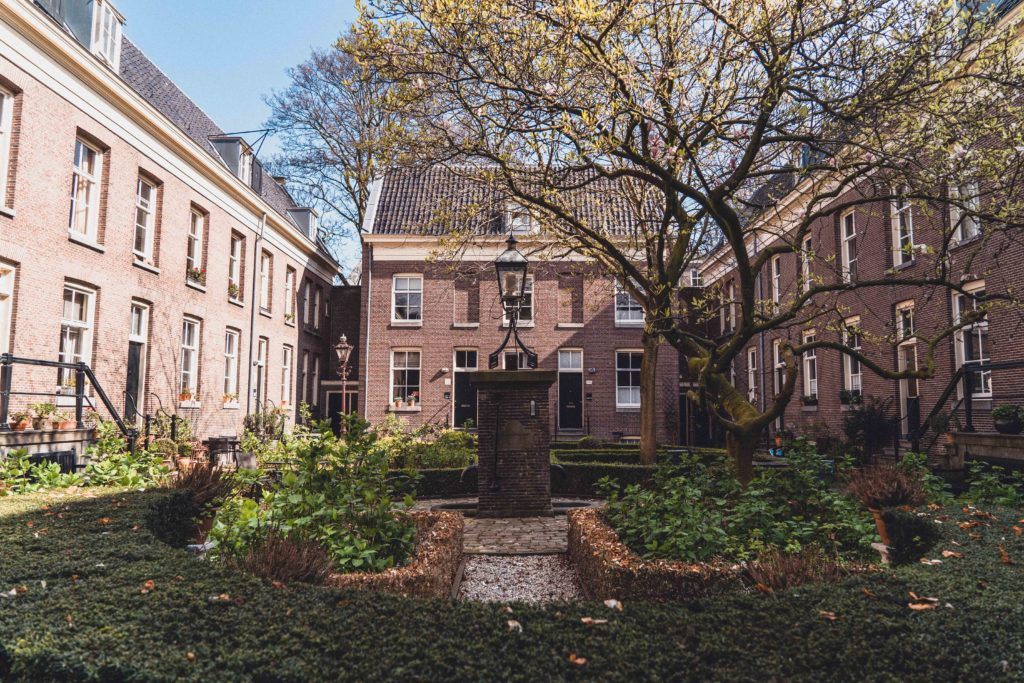 The most famous of all the Amsterdam hofjes is easily that of the Begijnhof, a beguinage dating back to the 14th-century. Though not as much of a hidden gem of Amsterdam as just a few years ago, this courtyard is populated by plenty of historic almshouses as well as an English Reformed Church and the Catholic Houten Huys.

Wander inside the English Reformed church today and you can expect to find several pulpit panels designed by Piet Mondrian, among other treasures. Elsewhere in the expansive courtyard, the wooden house is one of only two remaining wooden houses in the centre of Amsterdam. Dating all the way back to the 16th-century, nearby you’ll find several gable stones mounted on an otherwise nondescript wall. 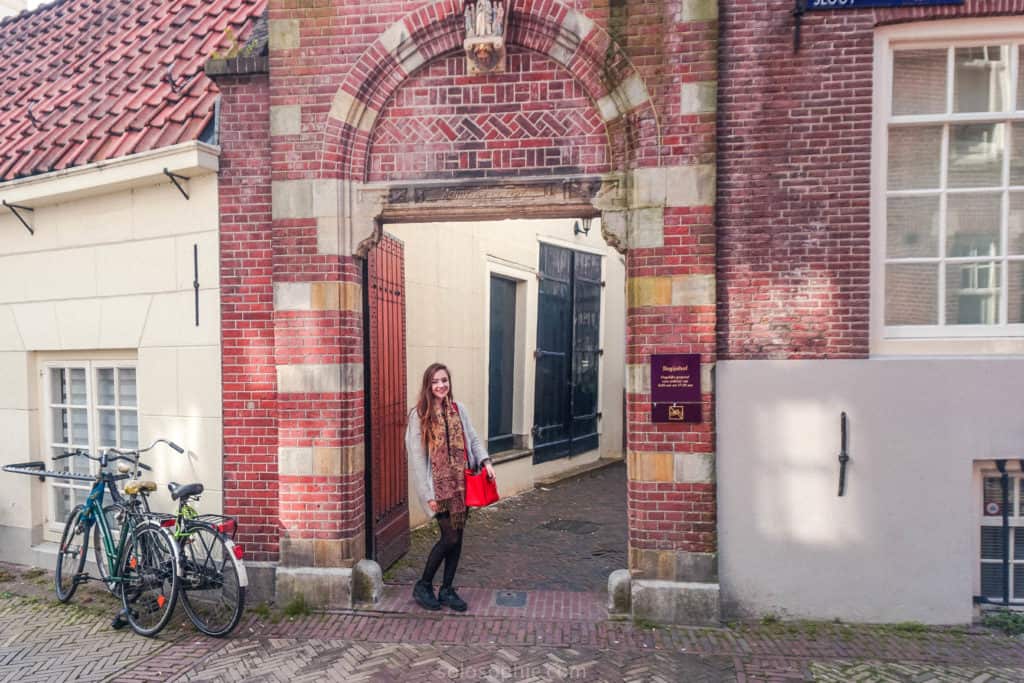 Enjoyed reading about the most beautiful hofjes in Amsterdam? Pin it now, read it again later: 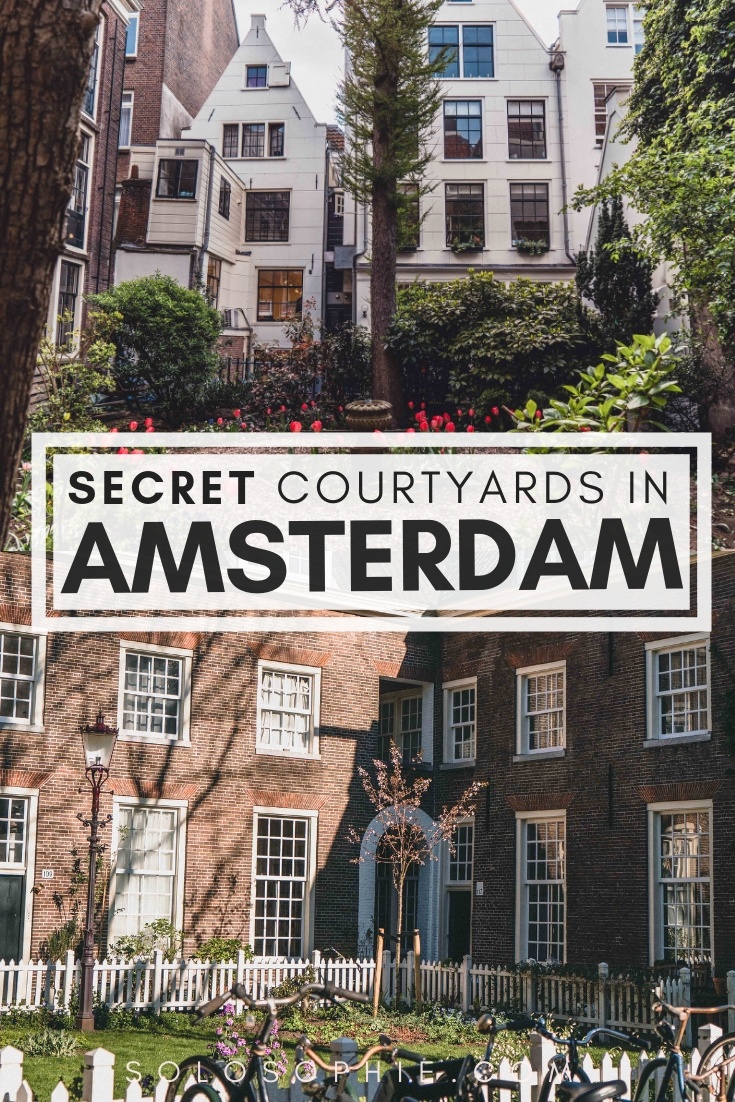 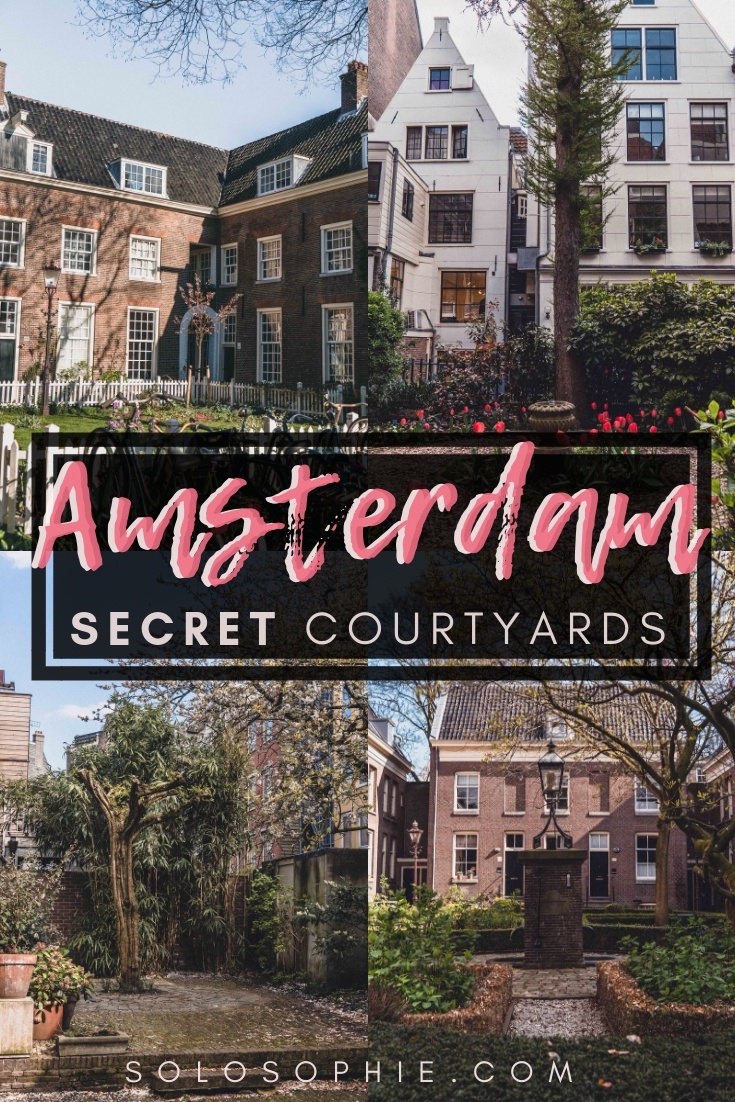 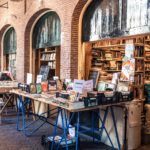 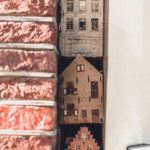 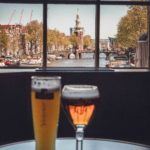 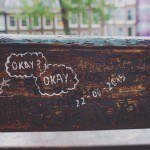 The Fault in Our Stars in Amsterdam Filming Locations!
494 shares
Click here to cancel reply.

[…] more hofjes in Amsterdam, check out the Amsterdam Hofjes website and Solo Sophie’s blog post for more pictures and info in […]