Rotterdam is like no other city in the Netherlands. Or, for that matter, the rest of Europe. During the Blitzkrieg of WWII, the city was near flattened, leaving behind little. Rotterdam became a blank canvas on which a modern metropolis has since been constructed. All concrete jungle and metal skyscrapers, here’s a free and self-guided Rotterdam walking tour you’ll want to follow:

Rotterdam is the kind of city that you’ll need to dedicate an entire day to exploring. Whether it be as a day trip from The Hague, Amsterdam, or as an overnight stop, there’s no shortage of things to see and do when it comes to Rotterdam. If you’re looking to see a number of attractions while in Holland (museums, paid parks, etc), then you may well want to consider investing in a Holland Pass.

When booking your route, be sure to arrive in Rotterdam Centraal (you’ll thank me later!) In order to undertake this walking tour, you’ll want to wear comfortable shoes that you’re able to walk a fair distance in. Rotterdam, like much of the rest of Europe, is not a place for high heels or brand new shoes.

Alternatively, it’s perfectly possible to rent a bike for the day and explore the city on two wheels. Bicycle parking is available throughout the city and exploring via bicycle means that you’ll be able to explore the fringes of the city which might otherwise be too far to traverse on foot.

For those who are looking to get a bite to eat en route, I highly recommend finding somewhere in the Cool District. This area of Rotterdam is known for its many bars and restaurants and, despite what you may think, although plenty of tourists wander around the area, there are still some great eateries to be found.

This walking tour begins where most journeys to Rotterdam start: Centraal Station. All modern architecture and glinting metal, the Centraal station is to be your first taster of the architecture of the city and a glimpse of what lies beyond its modern façade.

While it’s pretty apparent that Rotterdam is a hub for modern era architecture, what you may not know is that there is a Picasso statue in the heart of Rotterdam, not far from the Centraal Station. The concrete Sylvette was acquired by the City of Rotterdam following a seven-year deal and weighs some 46,000 kilos.

With ‘cool’ in its name (pronounced ‘coal’ in Dutch), you know that this district is going to be a place worth hanging out in. Home to many of the best bars, bistros, and brasseries in Rotterdam, the Cool District is where all the locals hang out. While in the Cool District, be sure to wander along the Witte de Withstraat strip.

The most famous resident in the history of the city is a certain Desiderius Erasmus, a scholar and Dutch Christian humanist who lived from the 15th to 16th-centuries. Those who have studied abroad within Europe have likely heard of the man before as one of the top study abroad programmes in the world is named for him.

Located just steps away from the Grote of Sint-Laurenskerk, this is the fifth incarnation of a number of such statues of Erasmus in the city. So influential of a man was Erasmus that he was the first non-royal to have had a statue created for him in the Netherlands.

One of the only buildings to have survived the Blitz of Rotterdam during WWII is the Grote of Sint-Laurenskerk, though it’s worth noting that this ecclesiastical building too, was badly damaged by the bombing. Dating all the way back to the 15th-century, this church is the sole reminder of Rotterdam’s medieval past.

The largest archway in Europe also happens to house the largest artwork in the Netherlands (a piece which is known as the Horn of Plenty), as well as being a great place to stop off for a bite to eat.

Located somewhere between the Old Church and the Old Harbour, the market hall (known as Markthal in Dutch) is home to stall upon stall of Dutch fast food, local produce, and bites to eat from all over the world.

If you’ve ever seen a photo of Rotterdam on Instagram, you’ve likely spied the cube houses. Designed by award-winning Dutch architect Piet Blom and built in the 1980s, there are forty cube ‘dwellings’ in total. Living in a house such as this is said to take some practice since only a quarter of the living space is actually habitable!

Constructed over the Blaak overpass, the tilted cubes are designed to be like urban treehouses. For those who want to catch a glimpse of what it might be like to live inside one of the cube houses, it’s possible to visit the Show Cube for a price (though, after I visited the house, I did feel like the entrance fee was on the pricier side of things).

If you’re staying in Rotterdam for a little longer than a day, then you may well consider staying in a Cube House for yourself. Stay Okay Hostel can be found in one of the few larger cubes on site and the accommodation is generally pretty well reviewed.

Filled with tall ships and set against the backdrop of the iconic Cube Houses, the Old Harbour of Rotterdam is where all the locals come to hang out. After all, it’s here where you’ll find plenty of bars and restaurants, including the award-winning Noah Cocktail Bar and Restaurant.

One of the first tall buildings in Europe is that of the Witte Huis. Situated on the fringes of the Oude Haven, the Witte Huis (quite literally translated as ‘White House’) was built between 1897 and 1898 in an attempt to replicate the Art Nouveau architecture that the architects had so fallen in love with in New York.

Now a National Heritage site, the Witte Huis stands at over forty metres tall and comprises of ten floors. Today, Witte Huis is easily one of the most beautiful buildings in Rotterdam and its ground floor functions as a café and restaurant.

For those who are unsure as to whether they want to pay the entrance fee, the adjacent Maritime Museum Harbour features all kinds of open-air installations and attractions. If you want to see even more of the harbour, together with a knowledgeable tour guide, then you may well consider booking this 90-Minute Harbor Cruise with Live Guide.

This set of three towers are connected via small glass bridges on the upper floors and their construction was only finalised in 2013. One of the best places in Amsterdam from which to admire the Erasmusbrug is from Willemsplein, 3016 DR Rotterdam.

Enjoyed reading this free and self-guided tour of Rotterdam? Pin it now, read it again later: 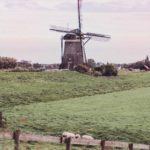 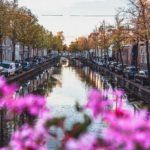 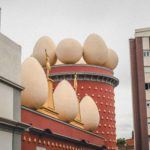 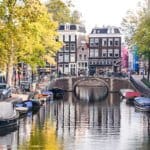 How to Experience & Recreate Amsterdam at Home
942 shares
Click here to cancel reply.