The city of Ostuni can be seen from far and wide across the Brindisi region of Apulia and is known as the ‘White City’ (La Città Bianca in Italian) thanks to the white painted old town which crowns the very top of the city. Rising up above a sea of olive groves and the twinkling Adriatic coastline, Ostuni is a must-see during any trip to Puglia. Here’s your guide to the best things to do in Ostuni, as well as travel tips and things to know before you go. 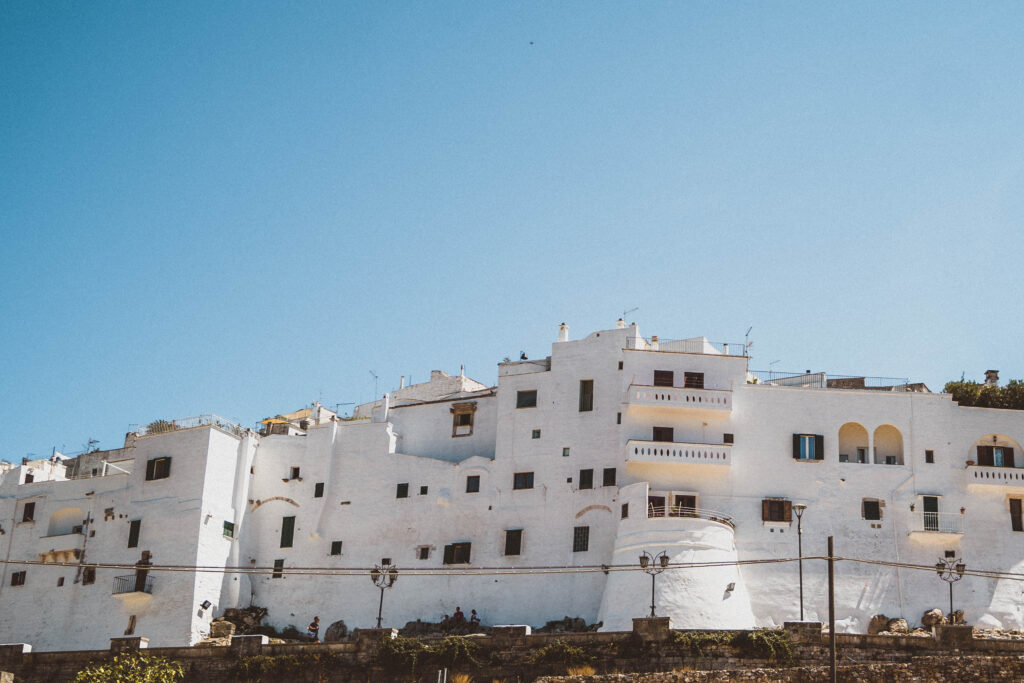 What is Ostuni known for?

A charming town of around 32,000 residents, Ostuni is most famous for its white painted old town which forms a maze of cobbled streets and narrow staircases. Hidden among this pedestrianised area, visitors will soon discover restaurants, churches, and residential building which comprise of Romanesque and Byzantine architectural elements. 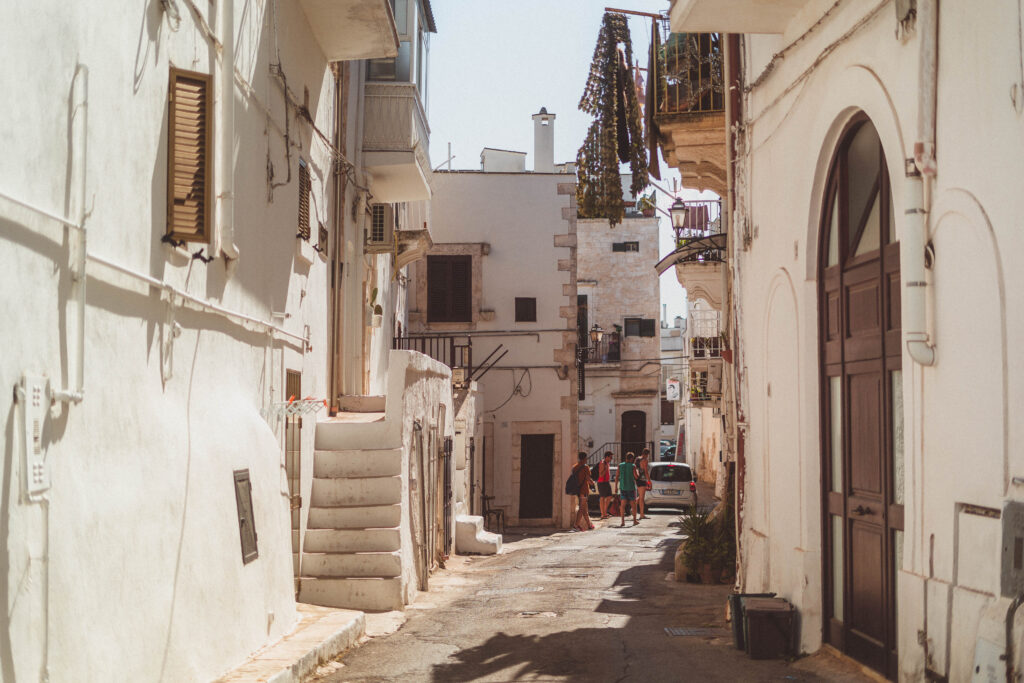 How long do you need to visit Ostuni?

Though we personally visited Ostuni over the course of a long afternoon as we had plenty to pack into our week long Italian road trip, you could easily spend much, much longer discovering the town’s little gardens, stunning vistas, and tasty local cuisine.

If you want to make the most of your stay in the city, then consider spending two or three night’s in Apulia’s Città Bianca. After all, there are many day trips to be taken from the city (Martina Franca, Locorotondo, and Cisternino are all within a half hour drive or so) and staying the night in Ostuni will give you the opportunity to explore the town without the crowds of day trippers. 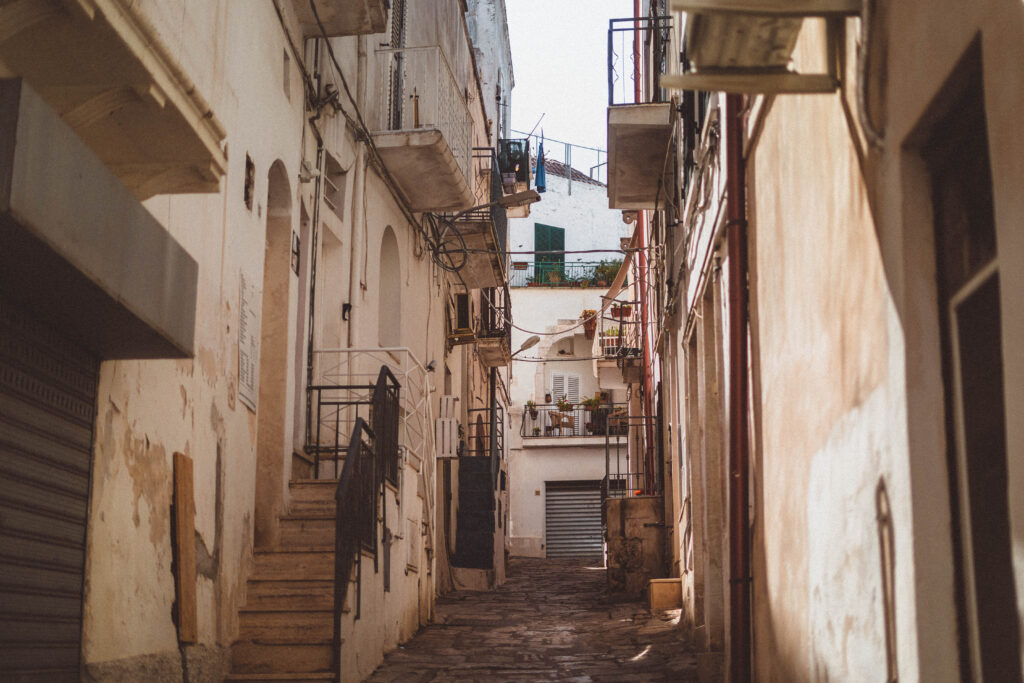 Things to do in Ostuni

Get lost in Ostuni’s ‘centro storico’

Truth be told, as with many towns in Puglia, one of the very best things you can hope to do on any trip to Ostuni is to get lost in its maze of little lanes and forgotten streets. Just be sure to wear comfortable walking shoes.

Indeed, a wander through Ostuni is reminiscent of a stroll through a Greek island settlement and this is no coincidence. In times gone by, Apulia was greatly influenced by Ancient Greek culture and the vestiges of this can still be felt to this day. If you want to get a local’s perspective and wish to delve deeper into the history of Ostuni, then you might consider booking a walking tour like this one. 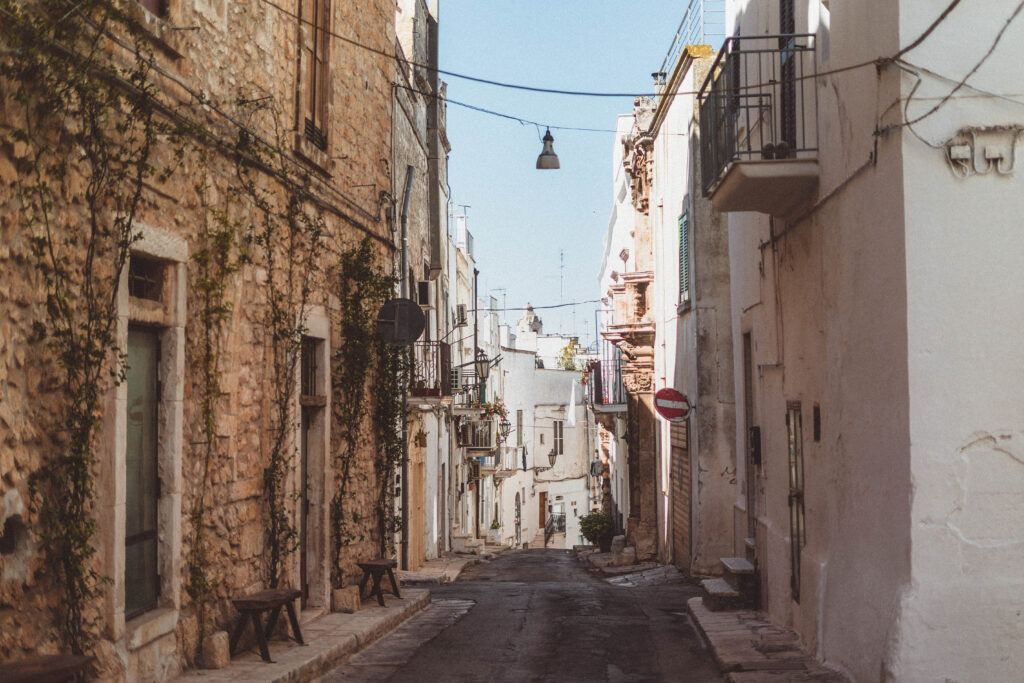 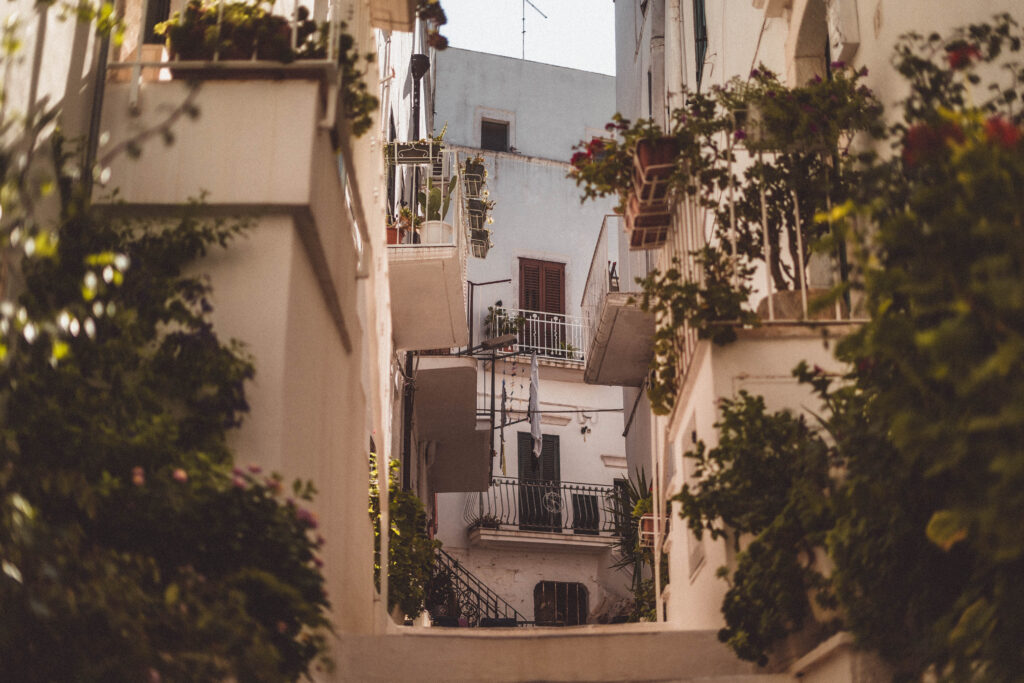 The main ecclesiastical building in Ostuni can be found in the form of the Cathedral of Saint Mary of the Assumption and there has been a place of worship on site since 1000. Known in Italian as Duomo di Ostuni; Basilica concattedrale di Santa Maria Assunta, the cathedral you see today was built in 1228-1229 in the Romanesque style and was rebuilt in the 15th-century in the Gothic style following a fairly significant earthquake. 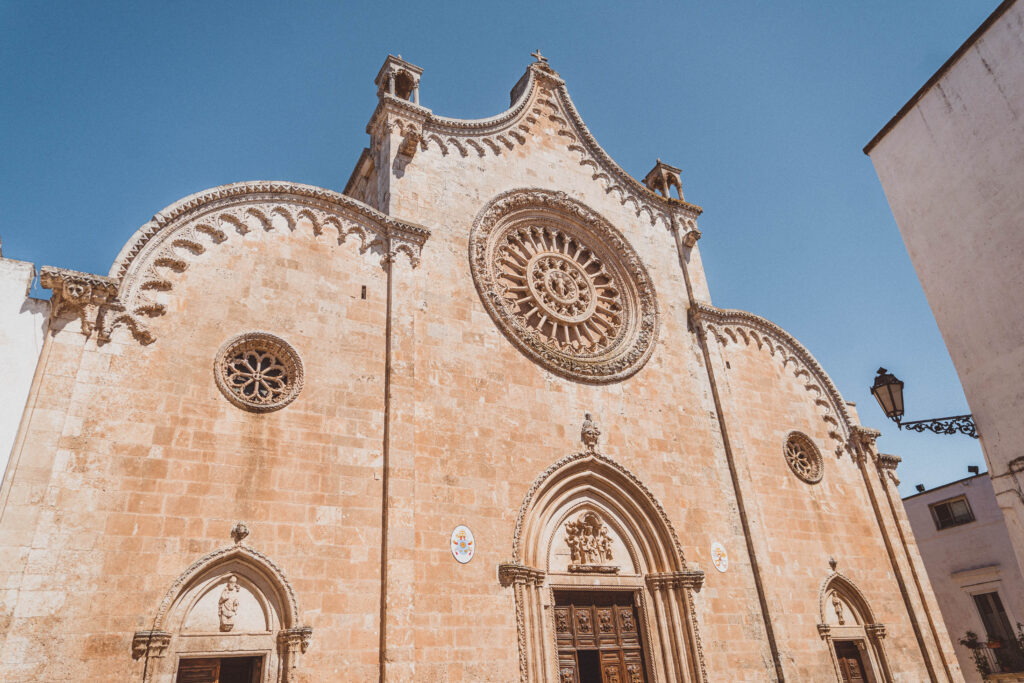 Ostuni is unlike many other Italian towns in that its cathedral doesn’t lie in the central square (piazza in Italian). Instead, the duomo can be found in its own little charming square which boasts several eateries and other historic buildings.

One such ancient edifice is that of the Arco di Scoppa, which you’ll likely walk under during any circular tour of the city. The old arch way connects the Bishop’s Palace to the Seminary. Originally, due to lack of funds and materials, the bridge was constructed of wood.

This all changed in 1750 when Bishop Scoppa commissioned that the wooden bridge was to be replaced with the stone bridge you see today in order to ensure better safety for those crossing it. Today, a small engraving on the stone bridge, which is modelled on the Bridge of Sighs in Venice, commemorates Bishop Scoppa. 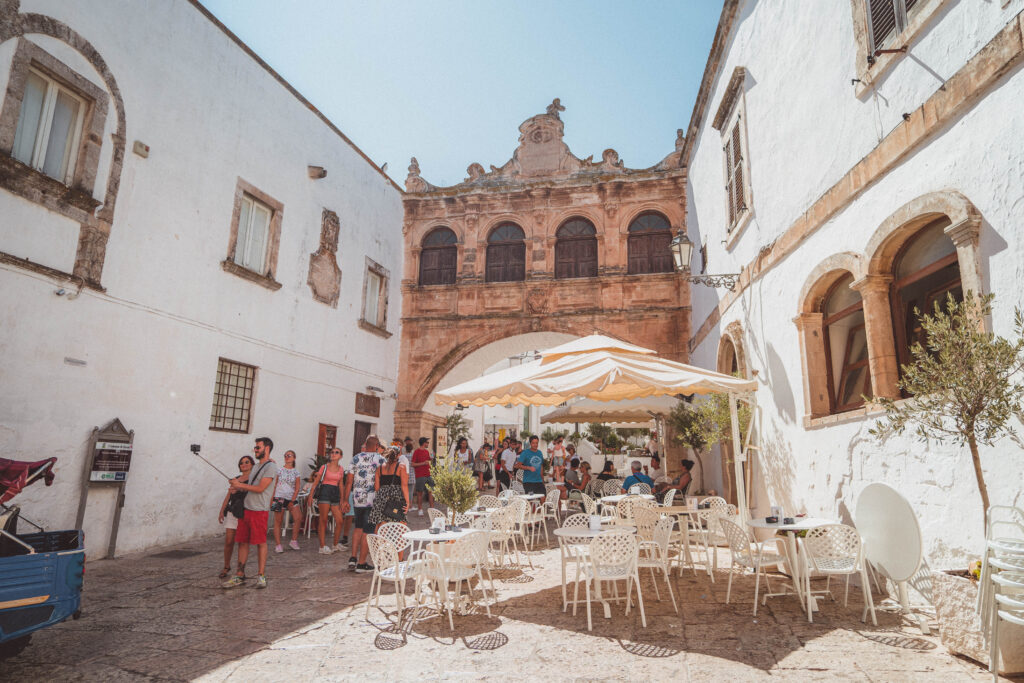 Of course, if you love Italian food, then no trip around a town centre in summer time would be complete without heading for an ice cream of gelato. Hands down, the best place to head to in town for a reasonably priced ice cream is Cremeria La Scala. I personally enjoyed a lemon flavoured sweet treat and we found the staff to be very friendly and helpful. 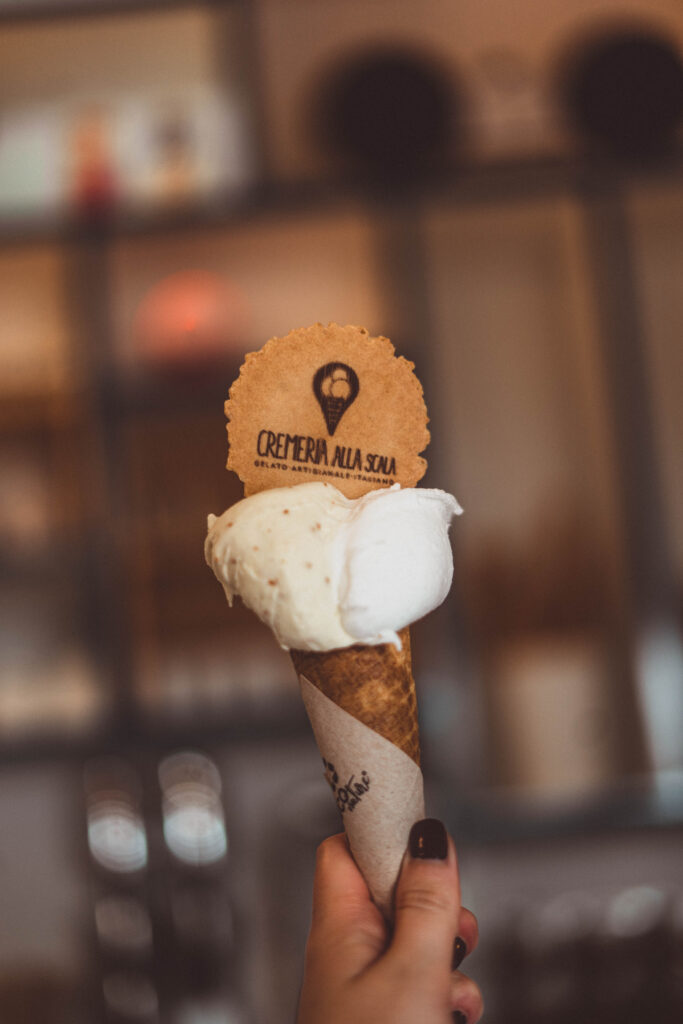 Just a few metres away from Cremaria La Scala, visitors will be able to discover Piazza della Liberta, which is Ostuni’s largest public square. Though, as a general rule of thumb, I tend to avoid city centre restaurants as they are often tourist traps, it’s still worth checking out the beautiful architecture and wide open space to be found there.

Of particular note in the Piazza della Liberta is the 20 metre high column which is known locally as the column of Sant’Oronzo. Constructed during the 18th-century, the column was erected in 1771 in order for the residents to give thanks to Sant’Oronzo for helping the city avoid plague and famine. Another architectural feature of note in the piazza is the Church of San Francesco d’Assisi. 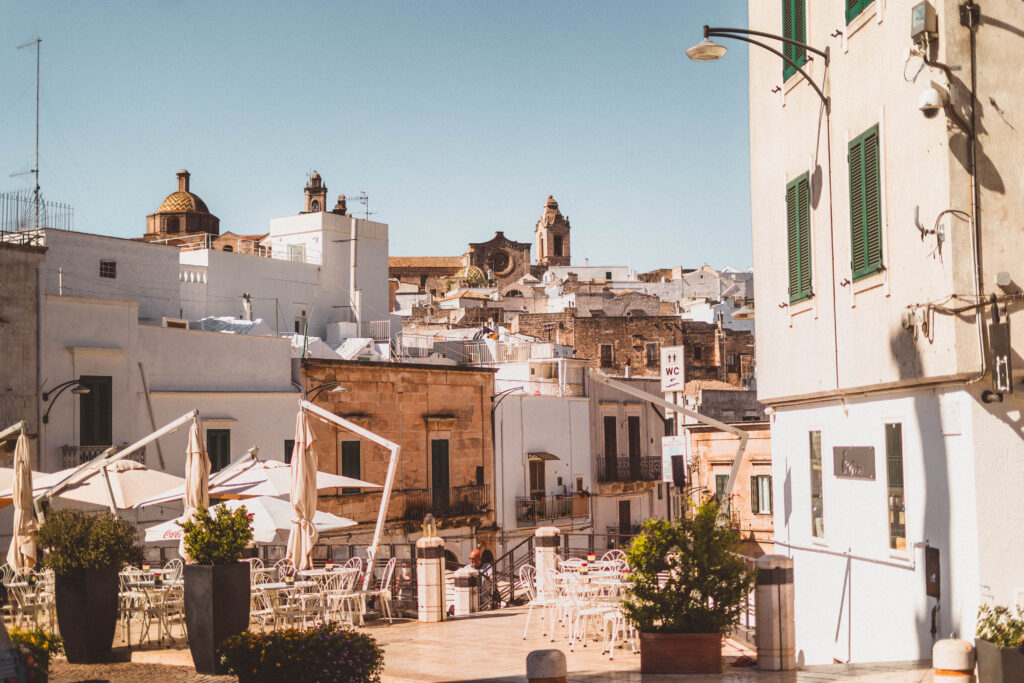 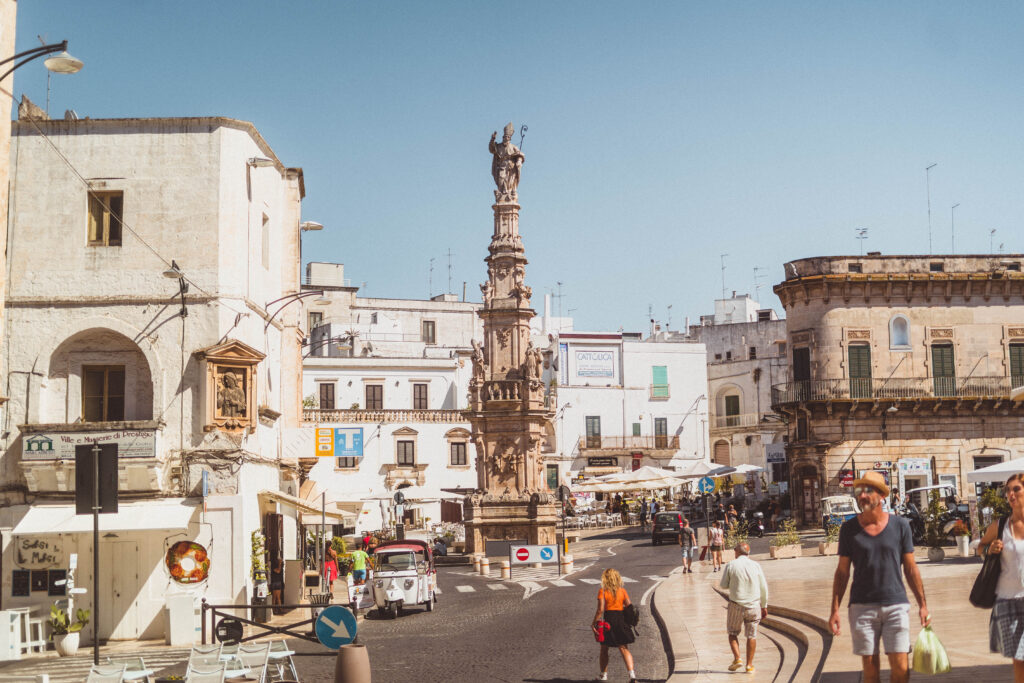 Stroll along the defensive walls and ramparts

In order to get a true feel for just how majestic and large the defensive walls of Ostuni are, be sure to take a stroll around the defensive walls that encircle the ‘centro storico’. These walls were constructed to keep out invaders during the Middle Ages and today give stunning views onto a sea of olive groves and other verdant farmland. 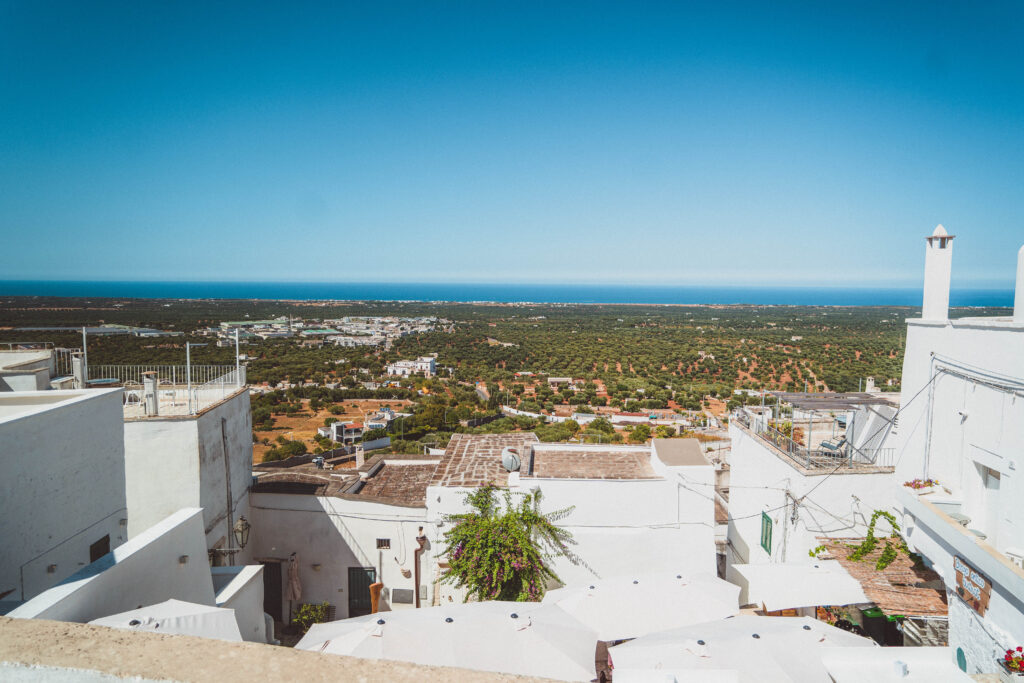 As with many towns in the ‘heel of the boot,’ Ostuni has a weekly market where you can head to in order to purchase fresh produce. Specialities of Puglia include local olive oil, olives, and artichokes. In fact, Puglia produces up to 22% of fruit and vegetables grown in Italy and so there is no shortage of regional delights to discover come market day.

In Ostuni, the market is held every Saturday morning from 8:00 AM to 1:00. Before visiting, you should note that vendors will begin to pack up a little before closing time and so be sure to head to the market earlier rather than later in order to ensure you’ll get exactly what you want. You’ll also want to bring cash (Italy uses the euro) as some vendors will not accept card. As always, come prepared with tote bags to carry your purchased goods in. 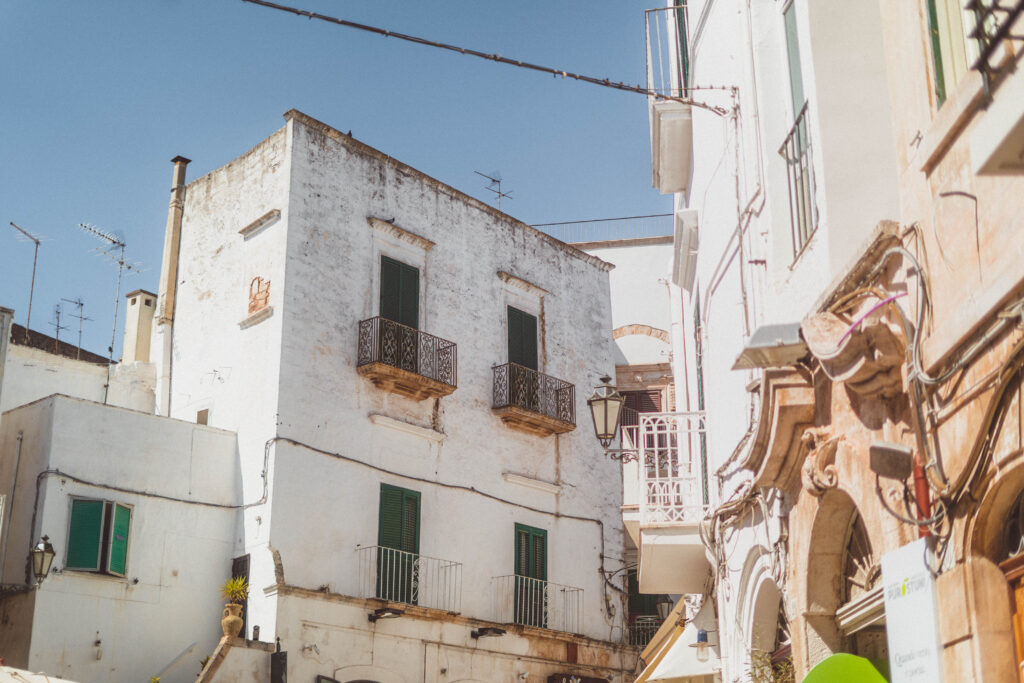 Enjoyed reading about the best things to do in Ostuni? Pin this article now, read it again later: 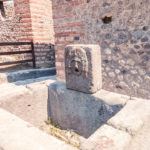 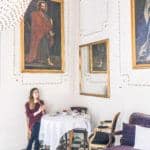 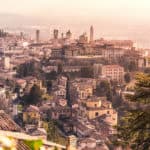 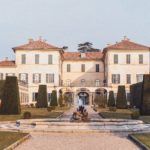