Once known as Lugdunum during Roman times, the city also makes for a great place to base yourself from which to explore the wider region. Here’s your guide to the best day trips from Lyon!

The foodie capital of France is to be found in the form of the city of Lyon, a sunny South West French city with highlight such as an ornate basilica, Presqu’Île filled with independent stores, and an old town to rival that of any other European city. Lyon also happens to be a fantastic space to explore the wider region of Eastern France.

Though, of course, you can always purchase your train tickets for these Lyon excursions on the day itself (which will also give you greater flexibility when planning your schedule), it’s also perfectly possible to purchase your tickets in advance so as to compare the best prices and check whether you want to take the train or bus! I personally use this website to compare the best prices and deals.

Filled with Roman ruins and surrounded by a crescent shape of five hills that have been forged by human hands over the centuries, the pretty city of Vienne was known as ‘Vienna’ during Roman times. In a rather confusing turn of events, the city we now know as ‘Vienna’ in Austria was actually called Vindobona.

Back at the French city of Vienne, there’s a myriad of historical sites to uncover, including an ancient Amphitheatre and millennia-old temple, as well as plenty of pretty pastel houses that give the town a rather Provençal feel. Vienne is easily one of the easiest day trips from Lyon thanks to its position on the train line just a twenty-minute ride away from the foodie city.

Pretty and filled with timber-framed houses, Chalon-Sur-Saône lies a little off the beaten tourist track and can be found spread across mainland France as well as an island on the River Saône.

Some of the best things to do in this little city include wandering inside the former cathedral turned church and learning about Nicéphore Niepce, who is largely credited with being the inventor of photography, at a museum that bears his name.

During your time in Chalon-Sur-Saône, the best place to enjoy afternoon tea or a light snack can be found at La Boule à Thé, while venturing onto the nearby island to see the ancient Hospital and admire the leaning Doyenne Tower is never a bad idea. From Lyon, it takes around an hour each way on the train.

With its candy-coloured houses and fast flowing river, the French town of Mâcon has a distinctively different flavour from the rest of France, and indeed Burgundy. Located around an hour away from Lyon on the train, this pretty town boasts attractions such as the ruins of a cathedral, a town museum set against the backdrop of an ancient convent, and an ancient hospital with rooms you can visit.

Just across the river, the quaint village of Saint-Laurent-Sur-Saône has little by way of attractions but is well worth checking out, if only to say you’ve crossed the medieval Saint Laurent Bridge. From Lyon, it only takes forty minutes to reach Mâcon, though the train station once in the town is around a ten-minute walk from the historic city centre.

For lovers of French vin, the wine city of France likely needs no introduction! Situated somewhere between Chalon-Sur-Saône and Dijon, this tiny town is packed with plenty of examples of Burgundy architecture, countless wine merchants and cellars where you can pay to go on tastings, and even a bookshop dedicated entirely to wine!

From Lyon, the train journey is a little farther than some of the other day trips suggested here, though totally worth it considering that Beaune is one of the best places to visit in Burgundy. The direct train between the two cities takes around two hours, though the train station is around a ten-minute walk from Beaune’s historic city centre.

If you’re looking for a dreamy French town that’s surrounded by swathes of vineyards and many a local wine producer, then Nuits-Saint-Georges is your best bet. Located along the Route des Grands Crus, a wine trail that snakes its way through the Burgundy, highlights of this tiny town include a local museum, the chance to go wine tasting, and the opportunity to wander along to other nearby villages.

While in Nuits-Saint-Georges, you’ll also have the chance to visit Le Cassissium, a local factory where the liqueur Cassis is produced. The tours take around an hour and include plenty of generous tastings at the end! Otherwise, it’s easy to reach Nuits-Saint-Georges on a train from Lyon, with the journey taking around two hours each way and including a single train transfer.

For those who are fans of the condiment that is mustard, Dijon is an absolute must-see! Nestled in the very heart of Burgundy, or Bourgogne as it is so-called in French, Dijon is home to delights such as an impressive Musée des Beaux-Arts, timber-framed old town, and Tour Philippe le Bon which you can climb for unparalleled views.

While in this French city, you also need to go mustard tasting, as well as search out all of the hidden gems dotted around the city. From Lyon, it couldn’t be easier to reach Dijon thanks to some fantastic train links. There’s a direct line between the two cities and it takes around two hours each way with no changes.

The Beaujolais Region is the gateway to Burgundy and can be found in the South of the Region, not far from Lyon. Truth be told, unlike many of the town day trips from Lyon, the easiest way to reach this area is by car as public transportation is a little limited.

And so, if you’re looking to take the stress away of planning the trip, then you might want to consider booking a guided tour such as this Half-Day Vienne & Côte-Rotie Wine Tasting Tour. Included in your ticket is a visit to the Roman city of Vienne, as well as the opportunity to sample some local wines at a family-run vineyard.

If you have access to a car, then no doubt you should take the day trip from Lyon to Perouges. Filled with cobbled lanes and charming houses, Perouges maintains a medieval vibe even in this day of mod-cons and fast-flowing technology.

So step a little off the beaten tourist track and head to the pretty village that looks like it’s come straight out of a storybook. The easiest way to get from Lyon to Perouges is by renting a car so that you can travel at your own speed and leisure. Check here for car rental comparison prices.

Enjoyed reading about the best day trips from Lyon? Pin it now, read it again later: 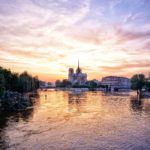 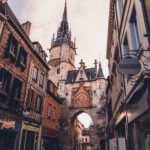 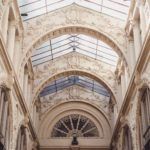 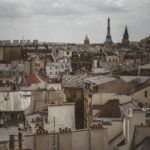