Between endless vineyards, timber-framed façades, and a wine culture dating back millennia, it’s no surprise that Bourgogne is one of those French regions that’s a total must-see once you’ve enjoyed the glittering lights of Paris and soaked up the sun of the Côte d’Azur. Here’s your ultimate guide to the best of beautiful villages and towns in Burgundy that will absolutely steal your heart! 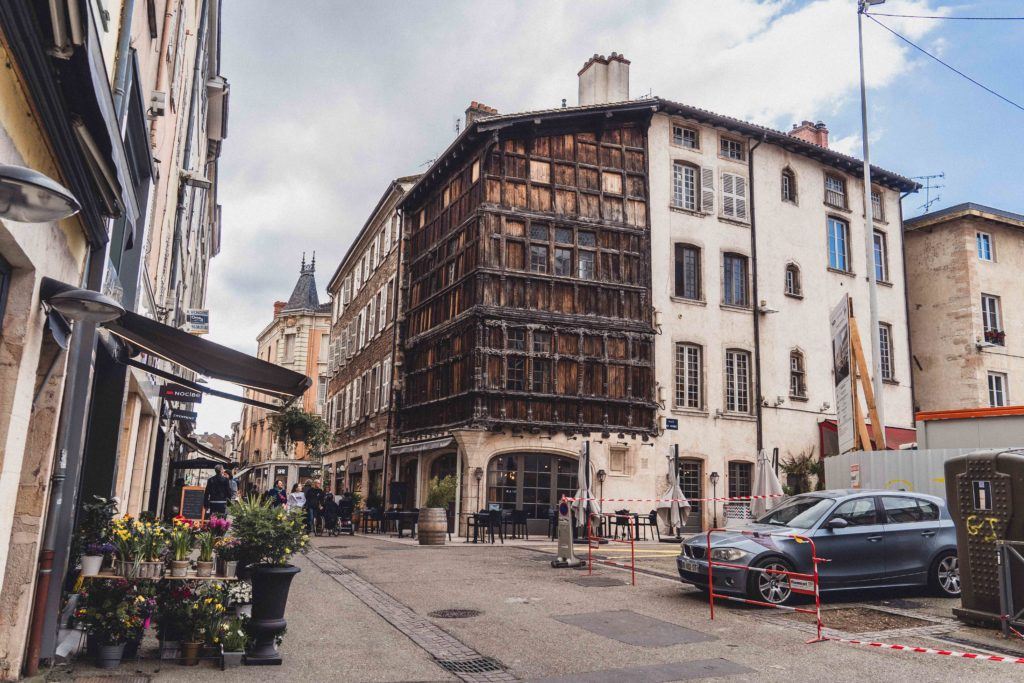 All pastel hues with a Provençal feel, the pretty town of Mâcon can be found somewhere between Chalon-Sur-Saône and Lyon. The town also happens to be the birthplace of the famous 18th-century politician Claude-Philibert Barthelot de Rambuteau (I dare you to find a town in France that doesn’t have at least one square or street named for Rambuteau!).

Other highlights of this off the beaten track settlement include admiring the ruins of Cathédrale le Vieux Saint-Vincent and enjoying the works of the Museum of Fine Arts, which is housed within a former Ursuline convent. Nearby, the Beaujolais vineyards are often said to produce some of the best wines in Burgundy. 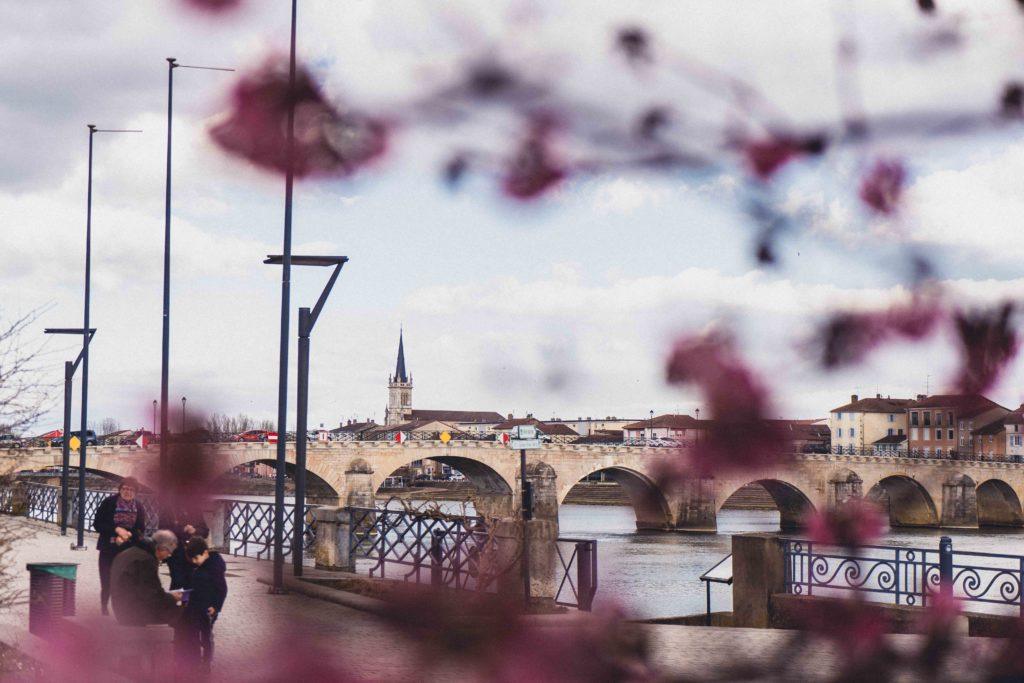 With a population of just under 5000 residents, Cluny is easily one of the smaller towns in Burgundy. Cluny is characterised by its central Abbey that was founded by Duke William I of Aquitaine in 910.

From the 10th-century onwards, a town grew up around the ecclesiastical building of Eastern France, thus resulting in a beautiful blend of Middle Ages buildings, including a particularly impressive Hôtel Dieu. 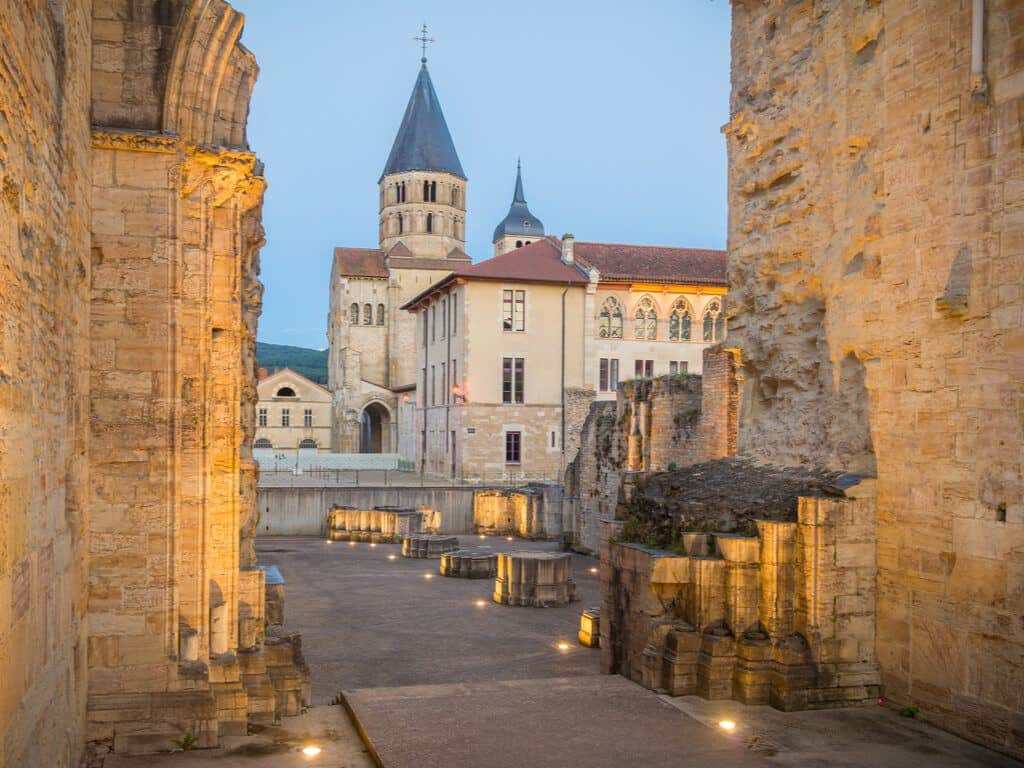 Set across mainland France and a small island that lies on the River Saône, Chalon-Sur-Saône is a little off the beaten tourist track and can be found in the very heart of Burgundy. Surrounded by vineyards and filled with timber-framed houses, this tiny town was even the birthplace of Nicéphore Niépce, one of the early pioneers of photography, and the man who even took the earliest surviving photograph! 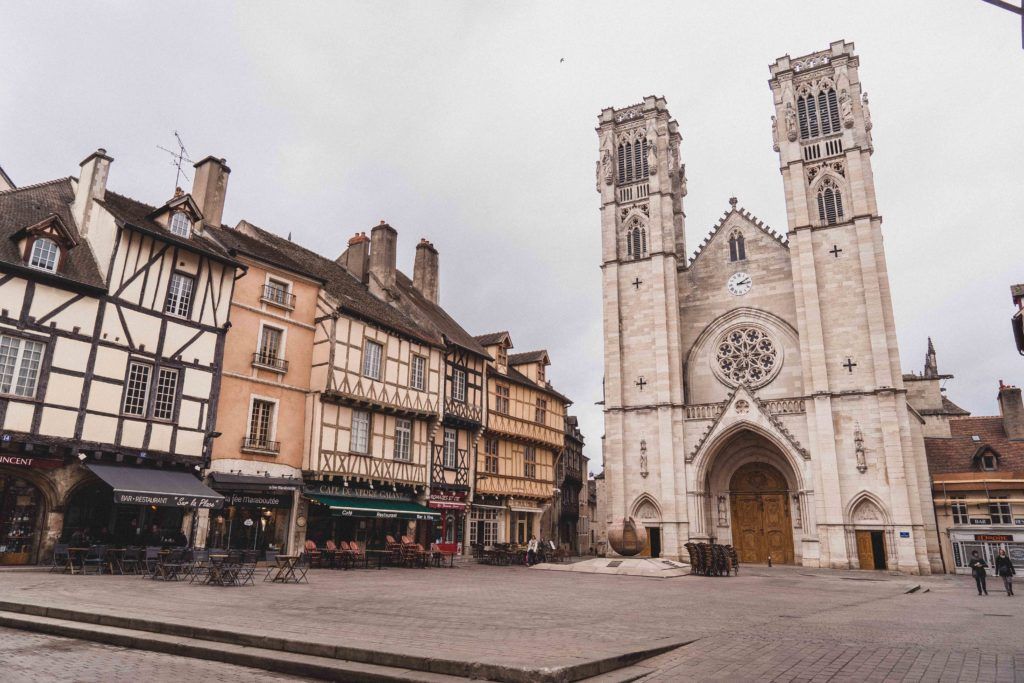 Home to one of the most beautiful Cathedral Tympanums in France, Autun is located to the west of Beaune and was originally founded as Augustodunum during Roman times. Visit today, and you can expect to find highlights such as plenty of Roman ruins (including a Roman theatre and the Temple of Janus) and the Musée Rolin, which features extensive artworks from the Burgundy region and beyond. 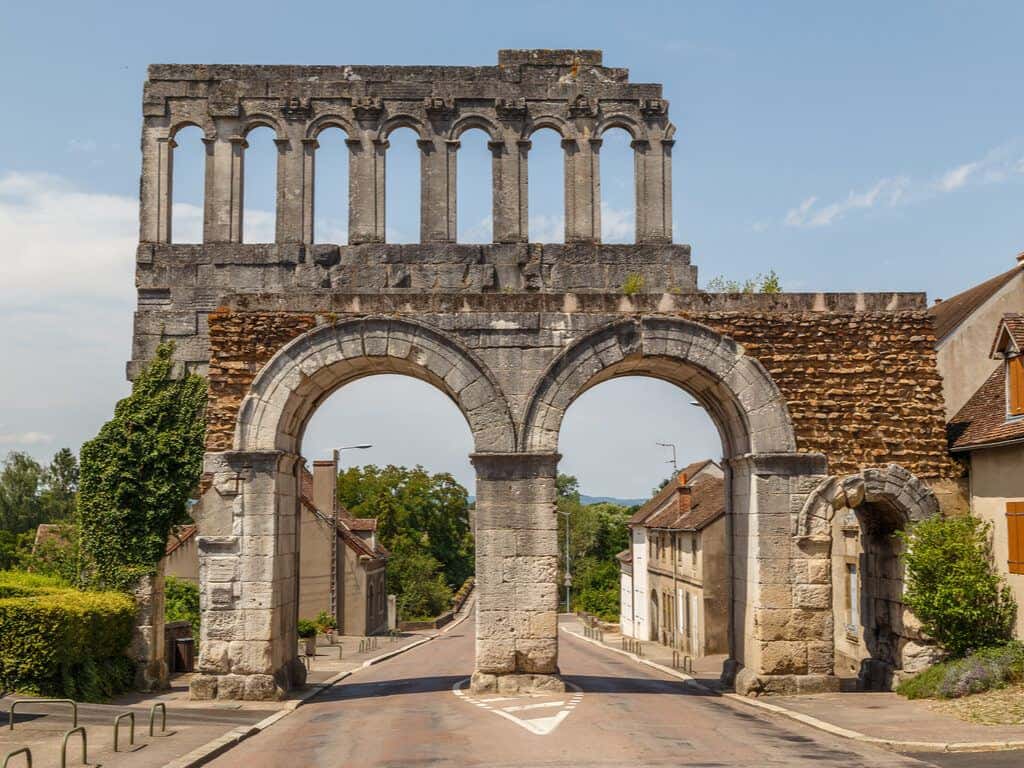 A little off the beaten path and far away from the crowds of Burgundy cities such as Beaune or Dijon, the city of Auxerre can be found nestled in a horseshoe bend of the River Yonne. Famous across France as being the site of three important ecclesiastical buildings, a Cathedral, Abbey, and Renaissance Church, all three can be spied from a single vantage point alongside the water.

Wander through the city and you’ll soon discover that Auxerre is divided into three distinctive districts, each with its own feel and ambience. In the Quartier de l’Horloge, there’s the 15th-century clock tower, while other highlights of Auxerre include several museums, many pedestrian-only streets, and of course the free-to-visit Abbey of Saint Germain of Auxerre. 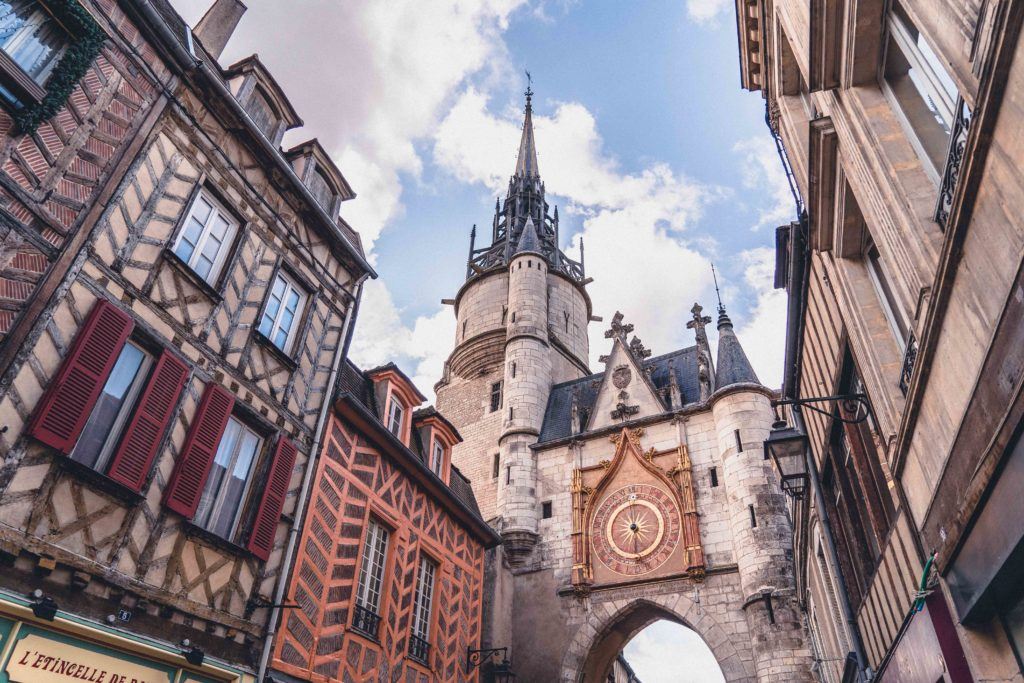 World-famous wine originates from the tiny town of Chablis, an otherwise unknown French settlement in the Northernmost part of Bourgogne that has a population of around two and a half thousand residents. The biggest export from Chablis is Chablis Chardonnay.

Other delights you can expect to find should you choose to visit include a historic town centre include the Porte Noel (the old city gate) and the churches of Saint-Pierre and Saint-Martin. From May to June, the Festival du Chablisien is held on an annual basis and is a celebration of all things jazz and music. 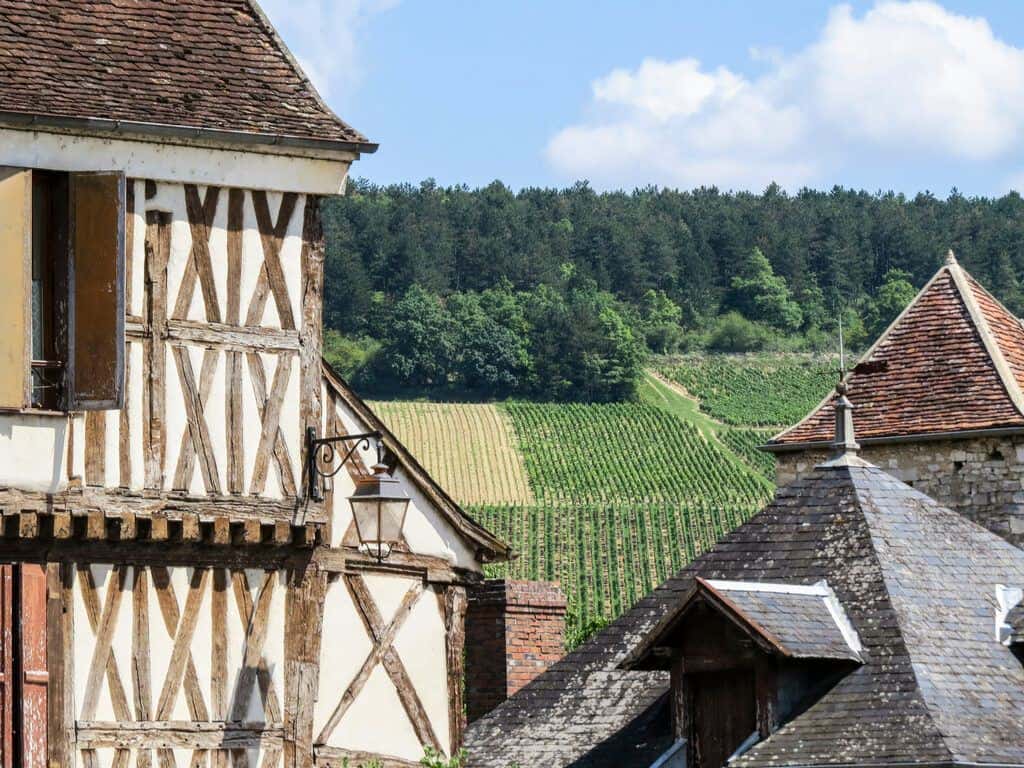 Best-known as being the French capital city of mustard, Dijon is one of the largest cities in Burgundy. Home to a population of around 155,000 some of the best things to do in the Burgundy city include mustard tasting, wandering around the timber-framed old town, and seeking out all of Dijon’s hidden gems. 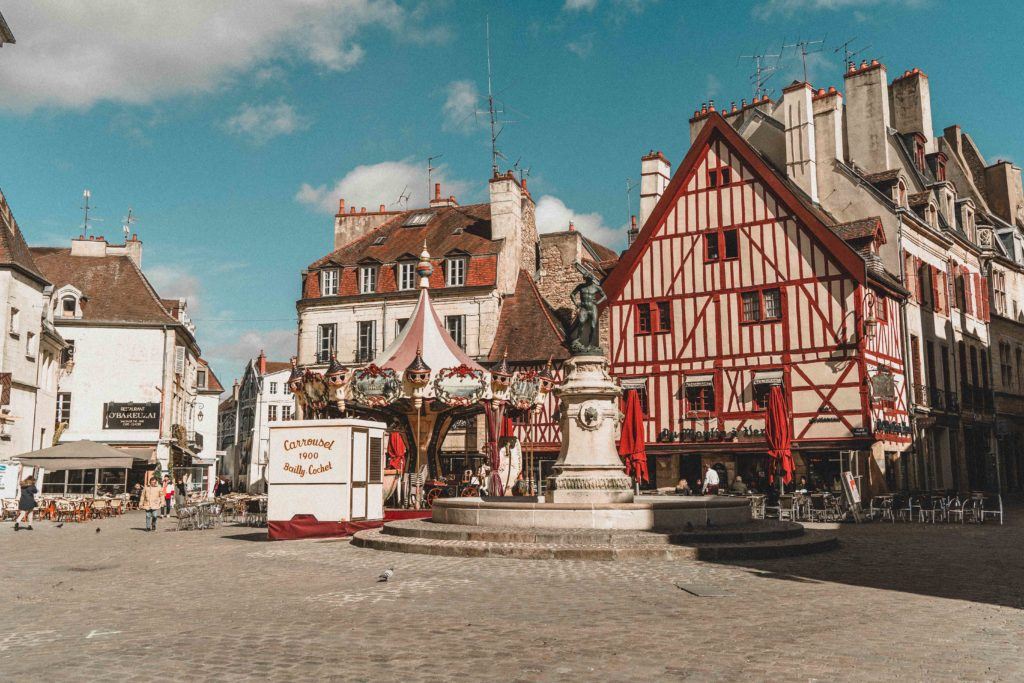 As if you thought Burgundy couldn’t get any dreamier, it turns out that there’s quite literally a Burgundy town called Avallon! Located somewhere between Auxerre and Beaune, as you might imagine, history and legend are closely interwoven when it comes to Avallon’s past.

While some theorists go as far to suggest that Avallon of Arthurian legend is the one and same as that of Bourgogne, there’s no denying the beauty of this settlement of seven thousand residents. Aside from searching for King Arthur, other Avallon highlights include the collegiate church of Saint-Lazare d’Avallon and visiting one of the town’s two museums (the Museum of Costume and the town museum). 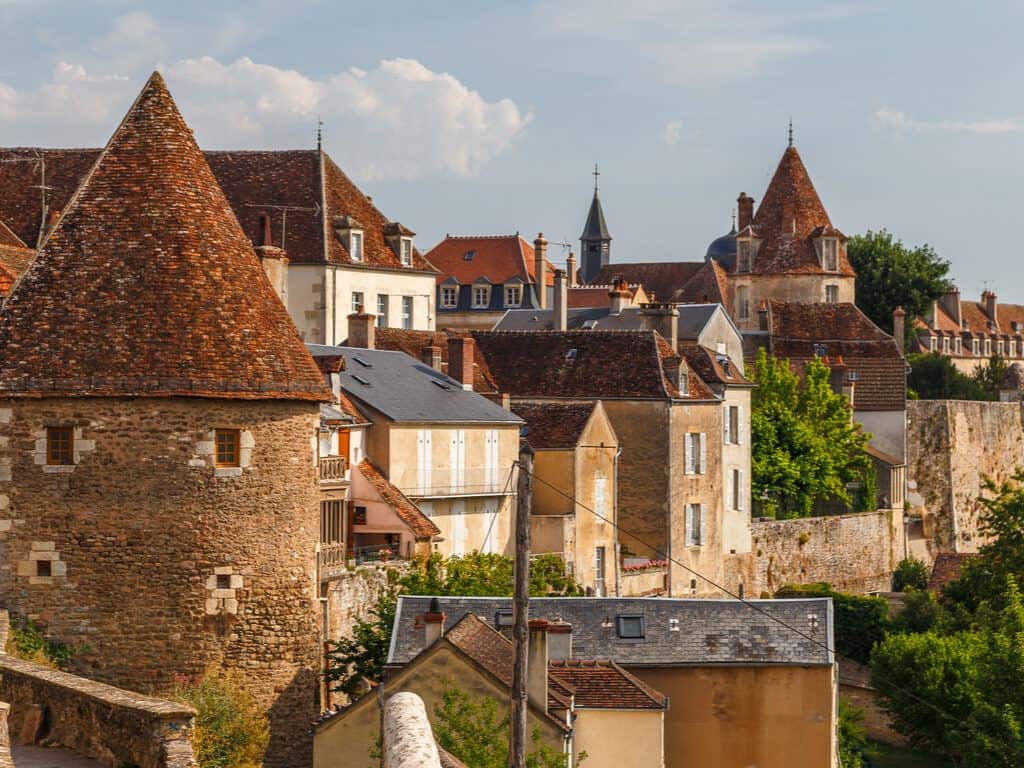 Founded as early as Roman times, if nearby Dijon is the French capital city of mustard, then Beaune is undoubtedly the French capital city of wine. Populated by plenty of wine tasting cellars, wine merchants, and even a wine bookshop, elsewhere in the little city you’ll soon discover that there’s many stunning churches, historic mansion houses, and of course, the old Beaune hospital. For more Beaune inspiration, check out my complete guide to the best things to do in Beaune. 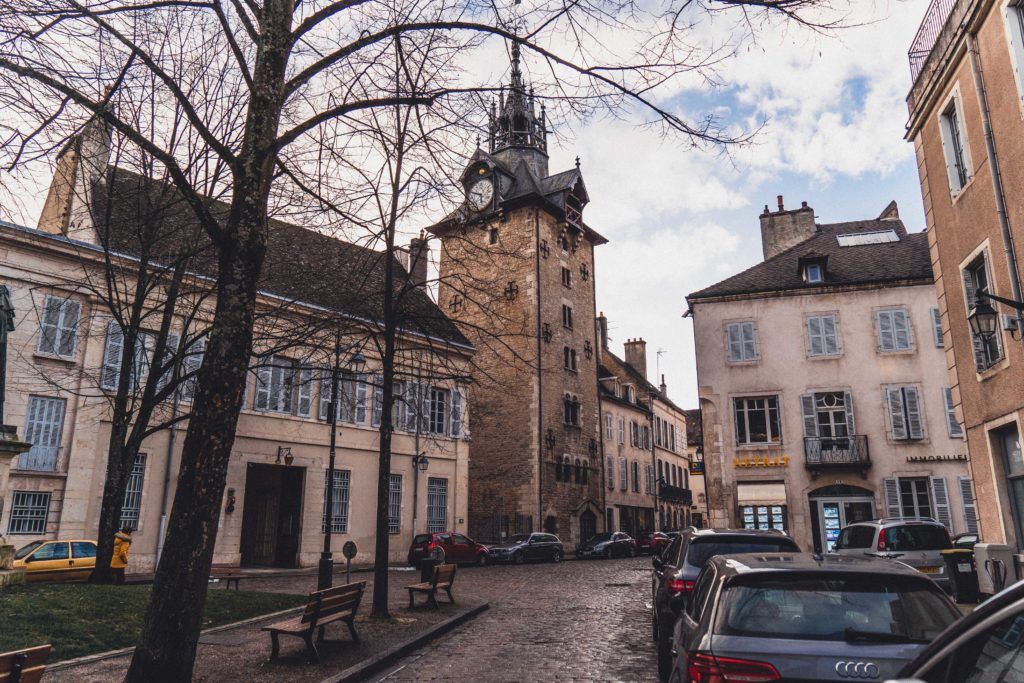 For those who are looking for a fairytale town complete with medieval ramparts and picture perfect views, Châteauneuf-en-Auxois is an absolute must. Situated to the North of Beaune, this historic settlement dates back to the 14th-century and is one of the last examples of Burgundian architecture of its kind. 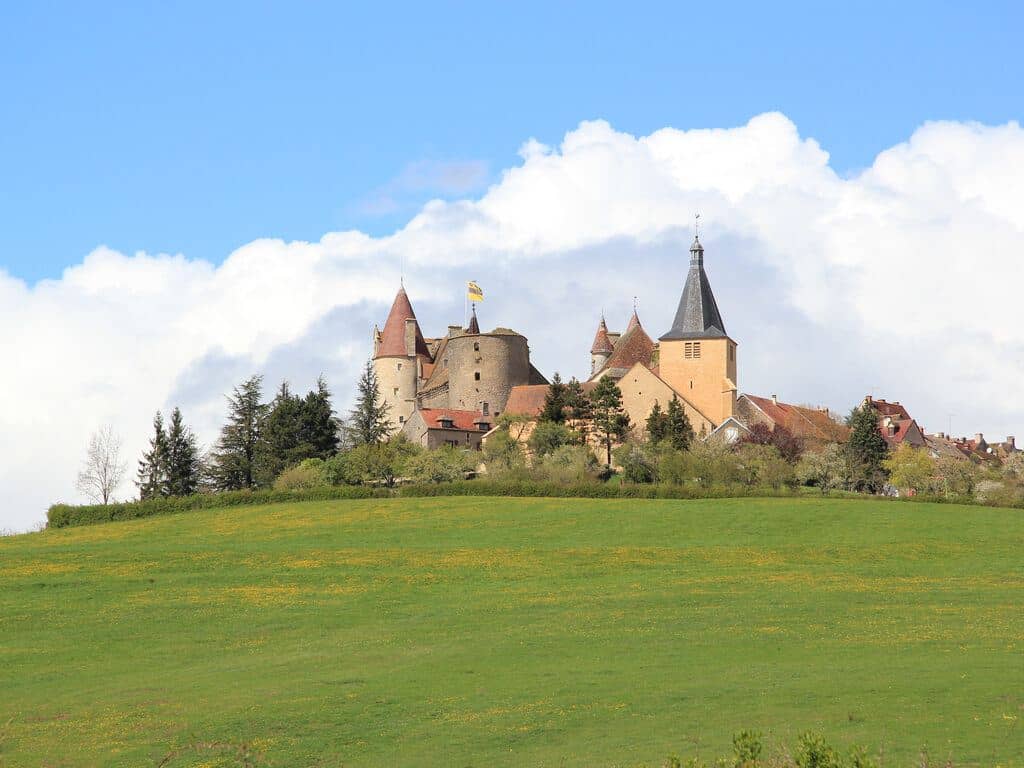 Located along the Route des Grands Crus, Nuits-Saint-Georges is perhaps most famous for its rich red wines. Easy to reach from nearby Dijon or Beaune, this world-famous town has much more to offer than venturing into the surrounding vineyards, though this, of course, is also an option if you’d like it to be!

Instead, the town is small in size and has just a handful of churches and smattering of traditional French bars and cafés. Close to the train station, on the fringes of Nuits-Saint-Georges, Le Cassissium produces all things blackcurrant related, including the region’s other famous tipple, Crème de Cassis. 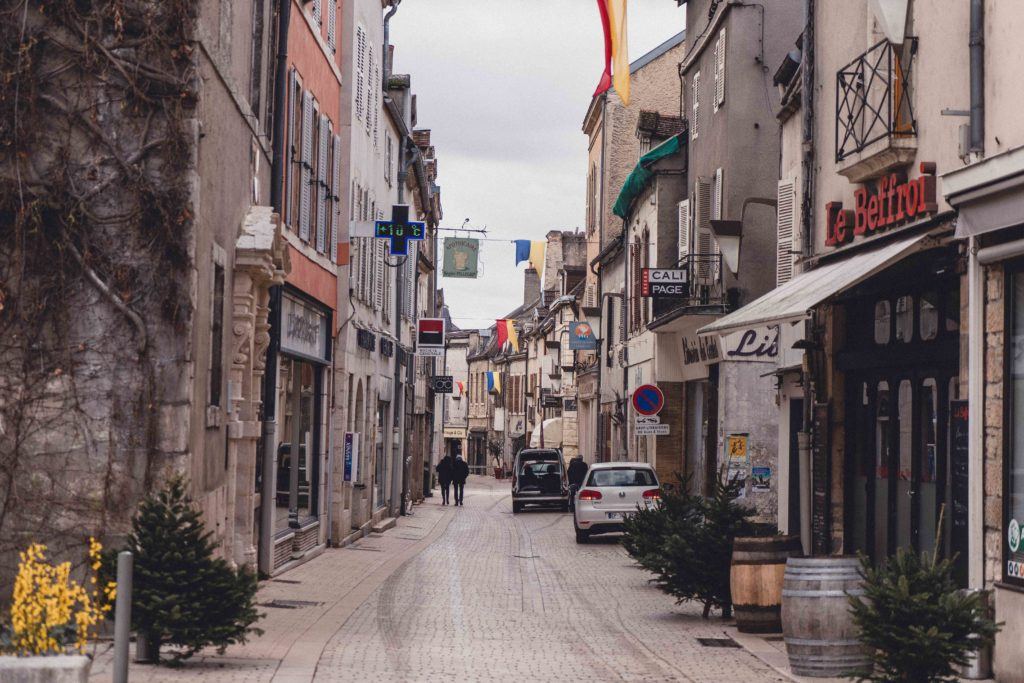 Found in the Côte-d’Or, Meursault is a tiny village of just over 1500 residents. Easy to visit as a day trip from Beaune, truth be told you come to this French settlement to experience some of the best wines that Burgundy has to offer. Otherwise, you simply need to stroll around, soak up Meursault’s ambience, and spy filming locations from the 1966 film, La Grande Vadrouille (the Great Stroll). 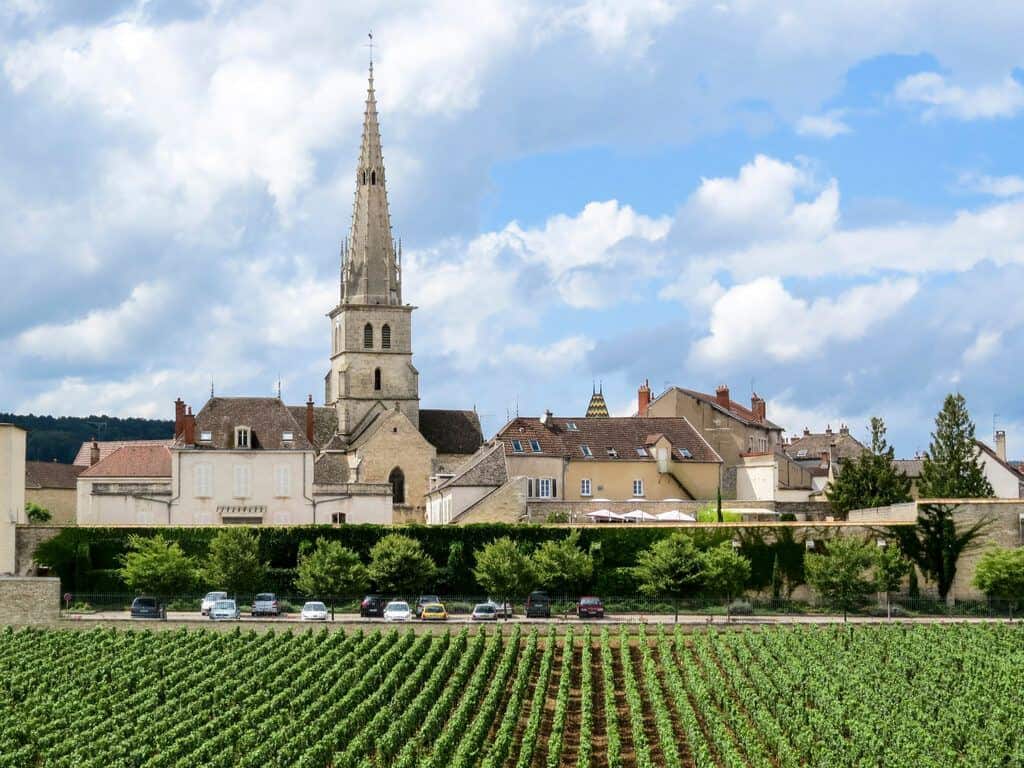 Situated just a couple of kilometres from the much larger, Nuits-Saint-Georges, Visne-Romanée is a quintessential Burgundian village with just a few hundred inhabitants. However, what makes this settlement truly remarkable is that on the edge of the town, down an unmarked and otherwise unremarkable road, the vineyard that produces the most expensive wine in the world is to be found.

Upon first glance, the vineyard for Romanée Conti looks like all of the other ‘climats’ in the area. The small plot of land is marked out by the kind of simple cross and stone wall that is so synonymous with the region. However, a little plaque on the wall indicates that this, indeed, is the Romanée Conti vineyard… 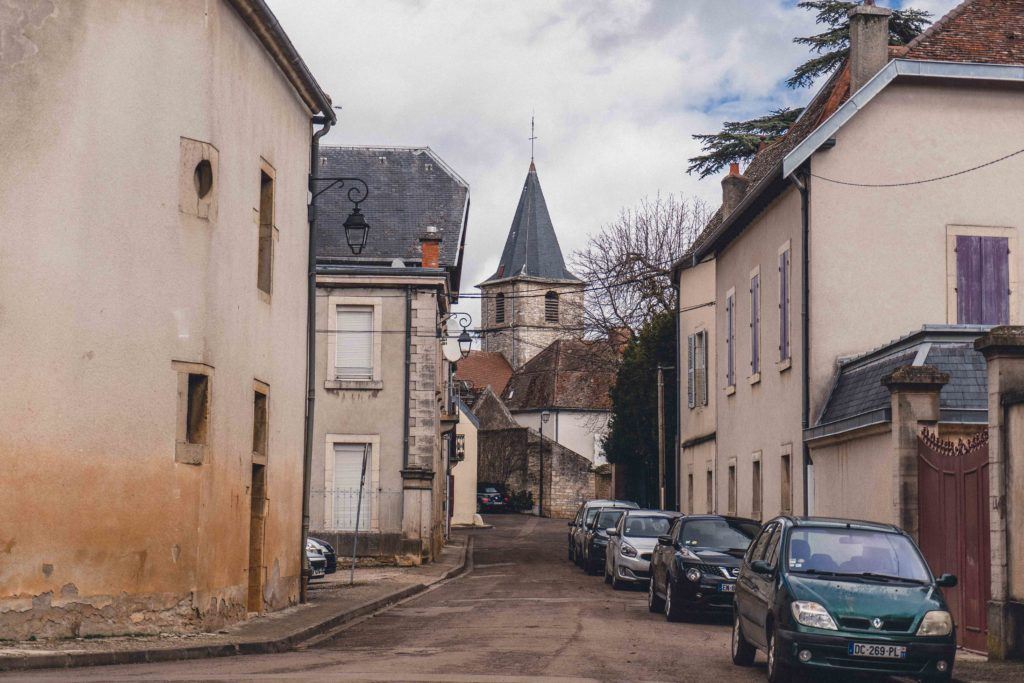 For those who are searching for the best of ecclesiastical history in Bourgogne as well as some of the best Burgundy architecture, there is perhaps nowhere quite as picturesque as the tiny town of Vézelay. Identifiable by its hilltop fortified appearance, the 11th-century built Romanesque Basilica of St Magdalene, as well as the town itself as both listed as UNESCO world heritage sites.

Situated just an hour south of Paris on the train, and one of the most Northern located towns in Burgundy, Sens may not have the draw of the Hospitals of Beaune, nor does it have the culinary scene of Dijon, or the world-famous wines of Nuits-Saint-Georges. And yet, the traditional streets and laid back nature of the town belies its fascinating history.

After all, it was here during the Middle Ages, it was here in this little-known town where Thomas à Becket chose to seek refuge. Other highlights of this tiny town include a breathtakingly beautiful cathedral (where the Becket stained glass window is clearly on view) and the covered market hall directly opposite the Cathedral. 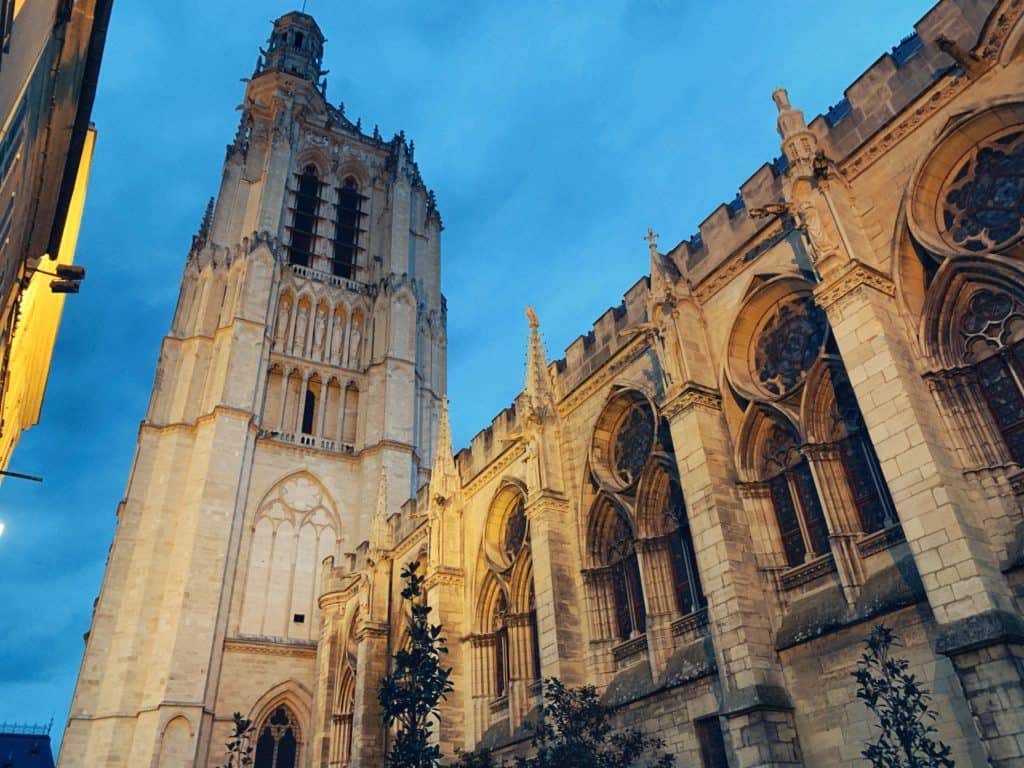 Of all the towns in Burgundy, one of the most magical of fairytale towns is that of Semur en Auxois. Perched atop a French hillside, the settlement in Bourgogne even features the remains of a medieval castle! Best seen over the course of a day, Semur-en-Auxois can be visited as a day trip from Dijon. 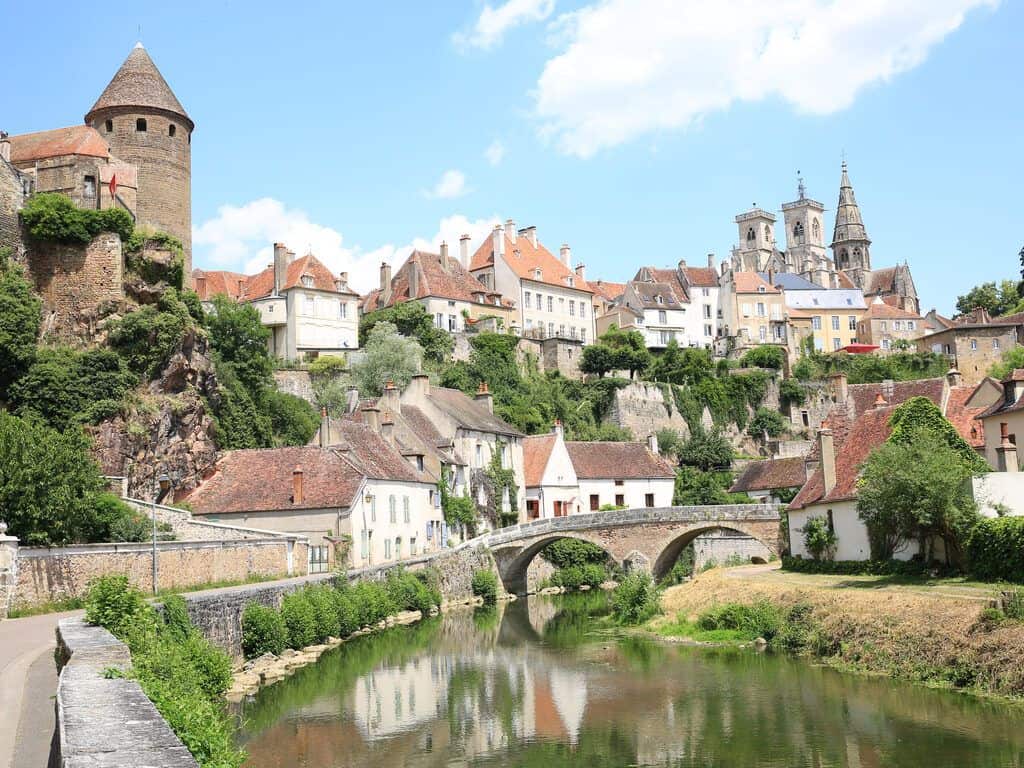 Enjoyed reading about the very best of towns in Burgundy? Pin it now, read it again later: 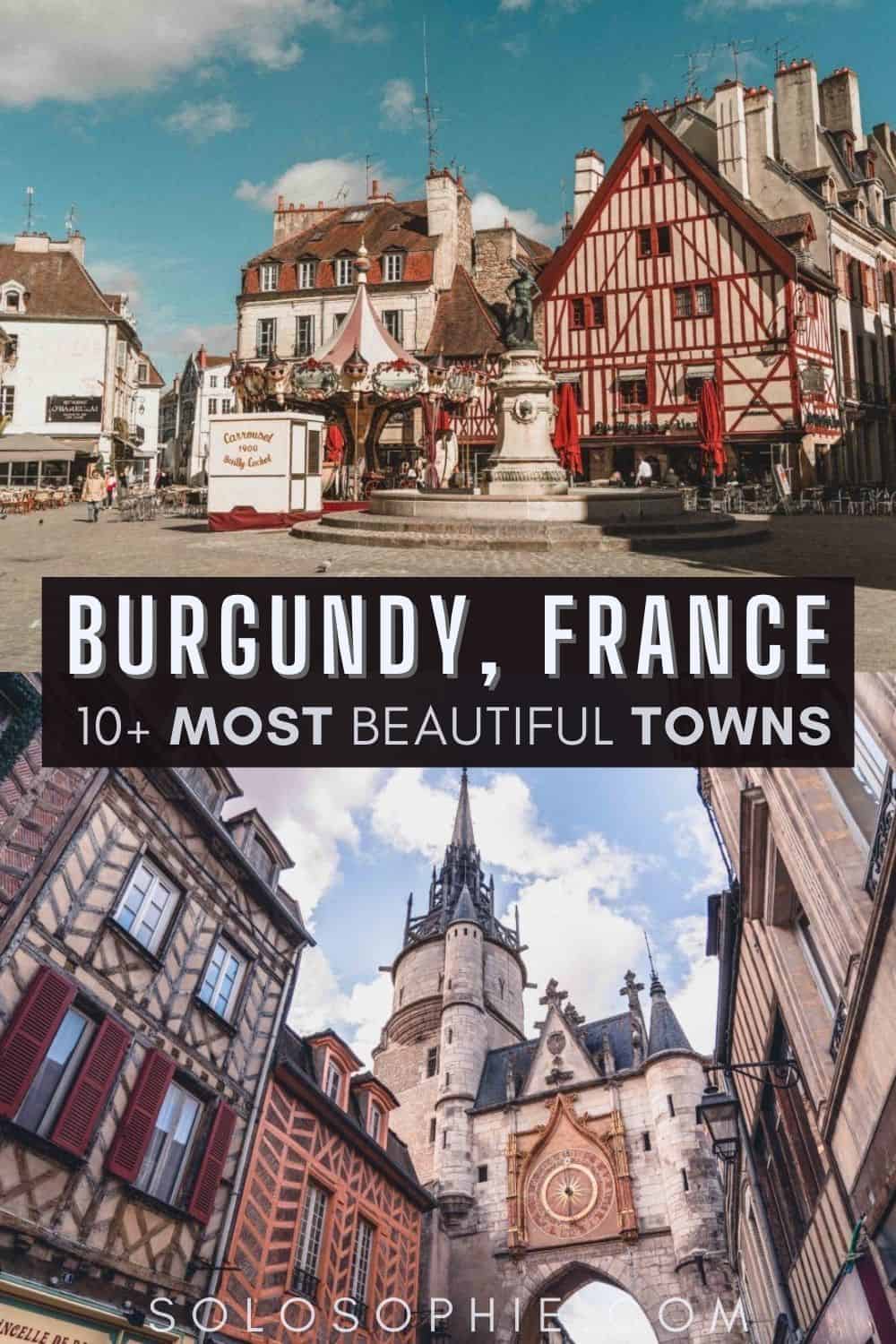 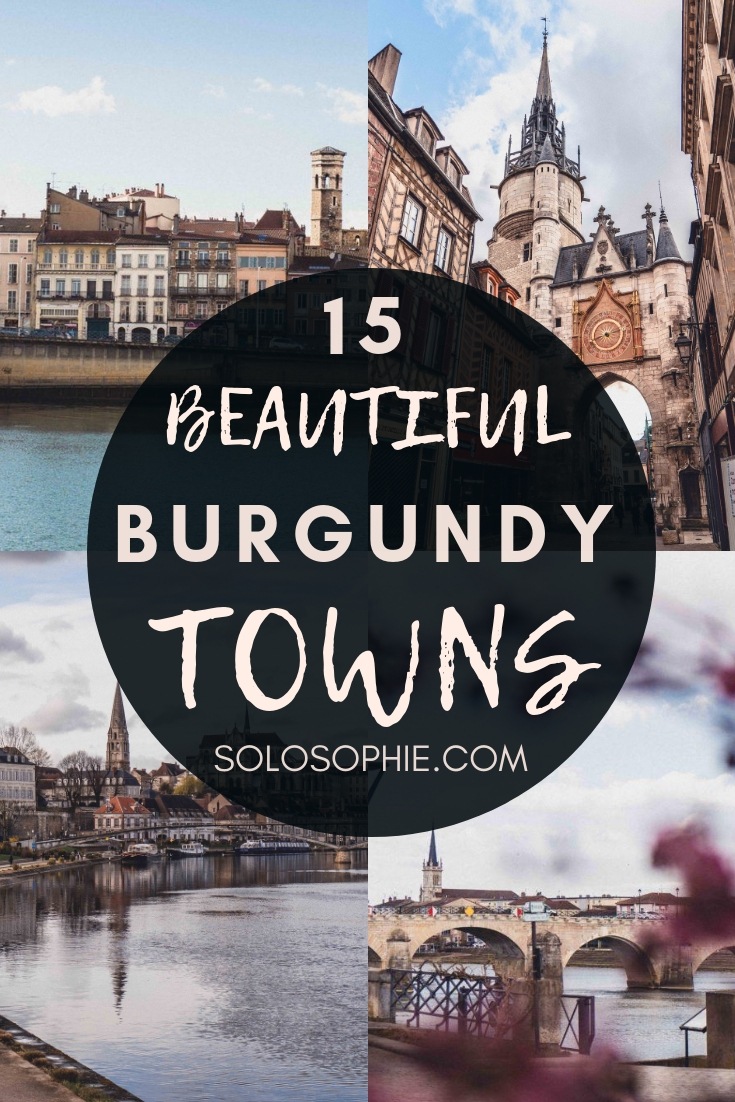 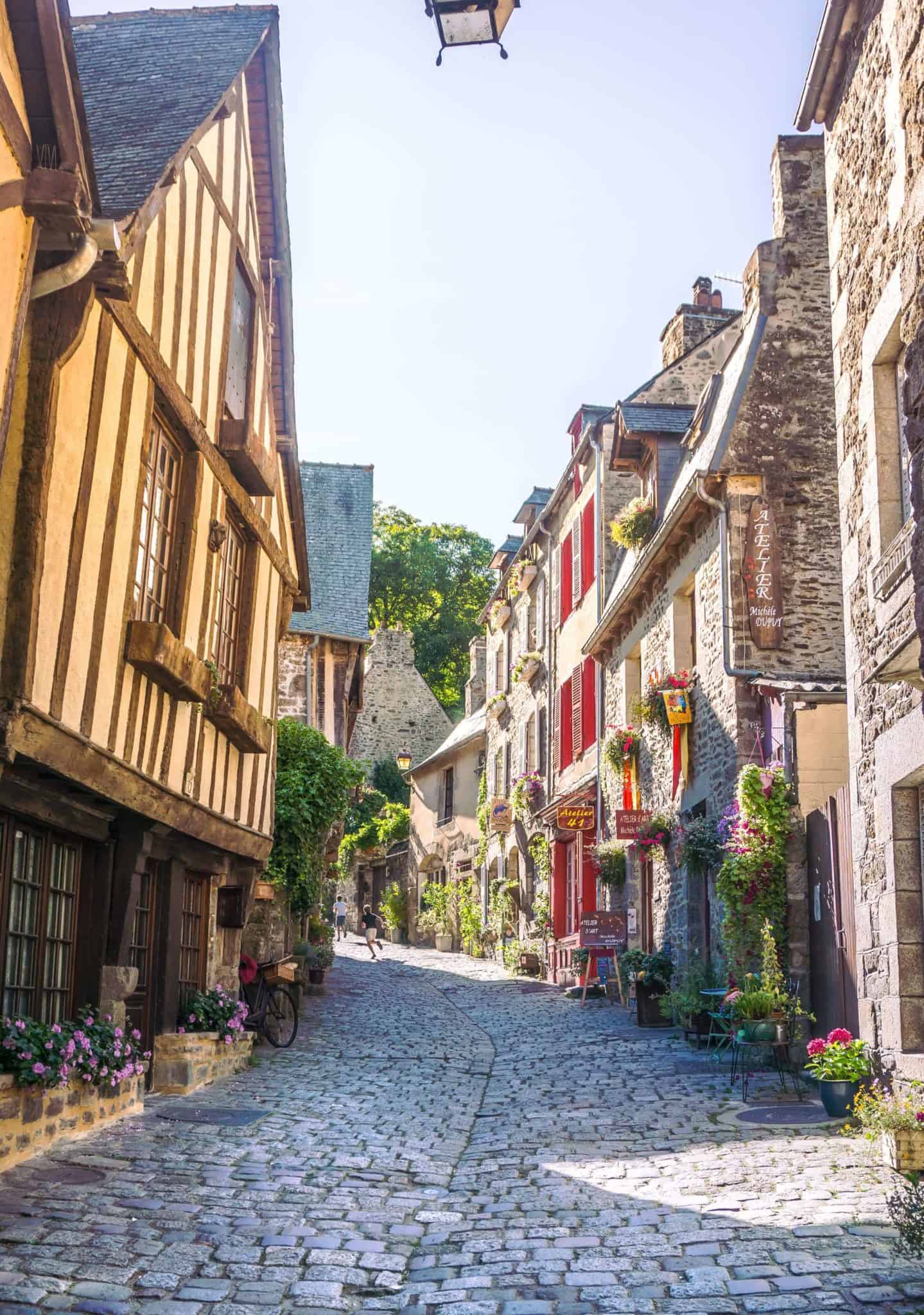 10+ Beautiful Towns in Brittany You Won’t Want to Miss 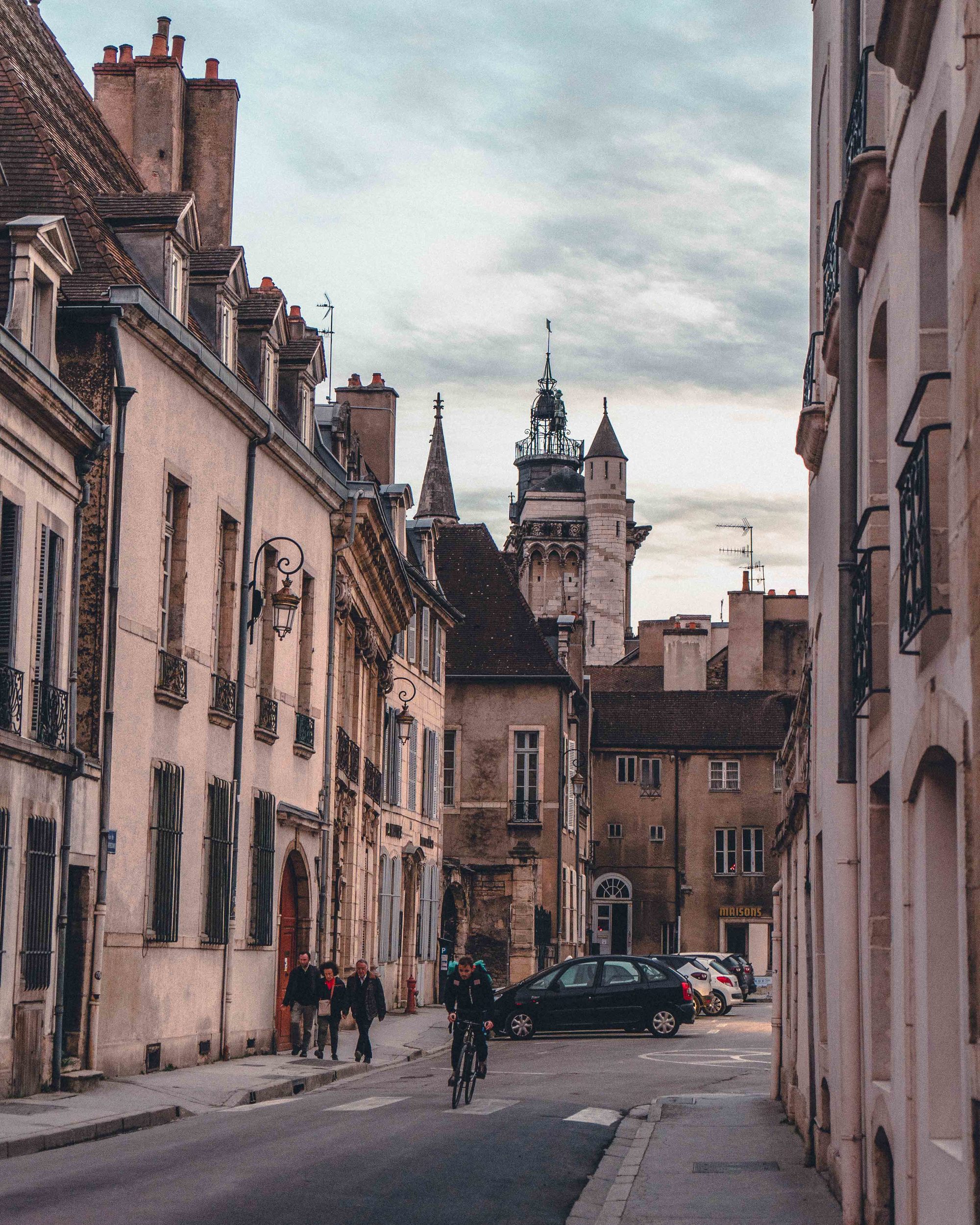 How to Spend A Rainy Day in Dijon (And Still Have Fun!) 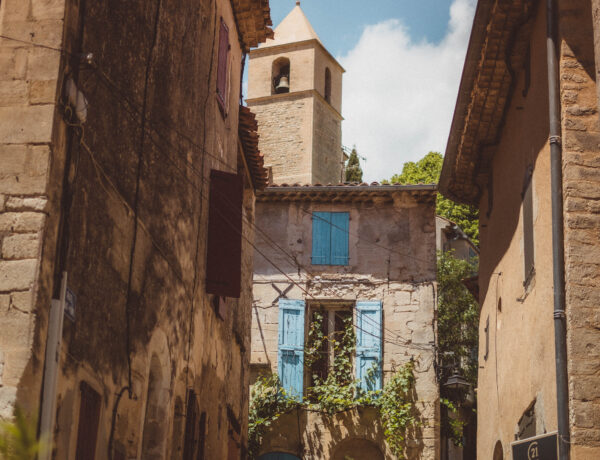