As its name would suggest, East Village is to be found on the lower east side of Manhattan, an area most famous for its buzzing nightlife, including old-school bars, jazz clubs, and all of the late-night eateries. Less popular than the ever-famous Midtown Manhattan, East Village is still well worth a visit if you have a little more time while in New York. Here’s your guide to the best of hidden gems and secret spots in East Village, Manhattan, New York.

Editor’s note: For even more of the best of New York and NYC hidden gems, please check out our website The New York Travel Guide! 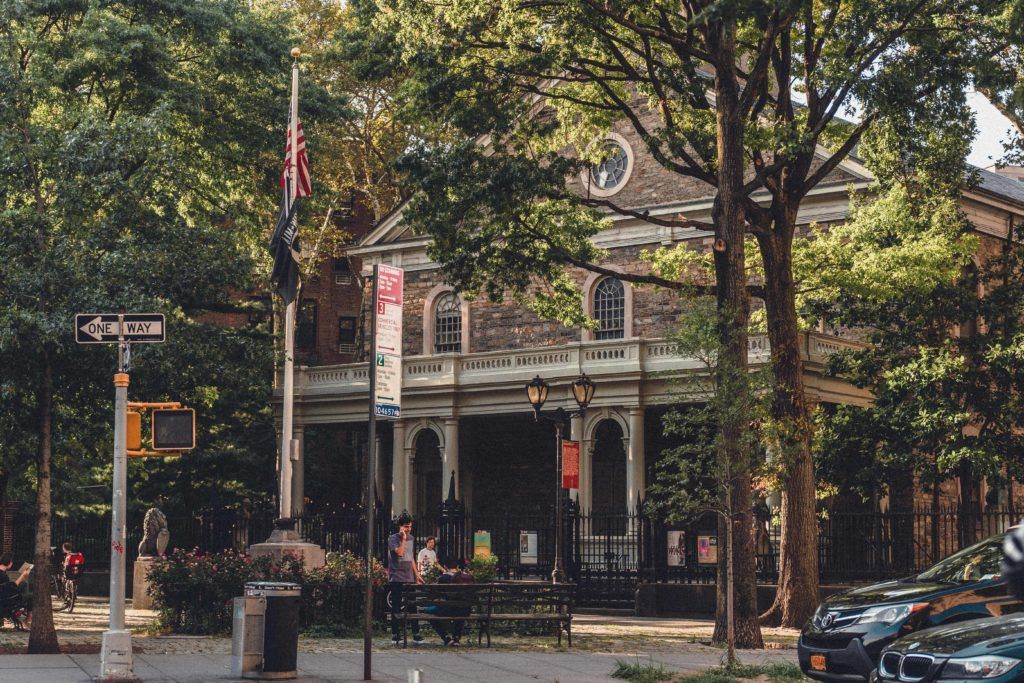 An eclectic, bustling, and busy neighbourhood, the East Village of Manhattan is often overlooked by visitors in favour of more popular districts such as Midtown Manhattan and New York’s West Village. However, not taking the time to visit during your New York stay, would be your first mistake.

After all, in East Village, you’ll soon discover an interesting area home to a wide selection of historic buildings, and plenty of off the beaten path parks and gardens. And if you’re looking to delve deeper into the history of the Rock ‘n Roll scene of the Manhattan district, be sure to book a guided tour like this one.

One of the best places to head to for the ultimate New York dessert experience is Van Leeuwen ice cream. Now in several locations dotted across the Big Apple, Van Leeuwen first started selling sweets in 2008 and has rapidly grown in popularity ever since thanks to a plethora of unusual flavours on the menu, including several vegan options!

All ice cream is made in Greenpoint, Brooklyn and you can purchase your ice cream in a cone or in a cup. While there is ample seating inside the store, as well as several benches directly out front, I personally recommend taking your ice cream to go, allowing you further time to discover other secrets of the East Village. You should know before visiting that the store is card only (no cash)! 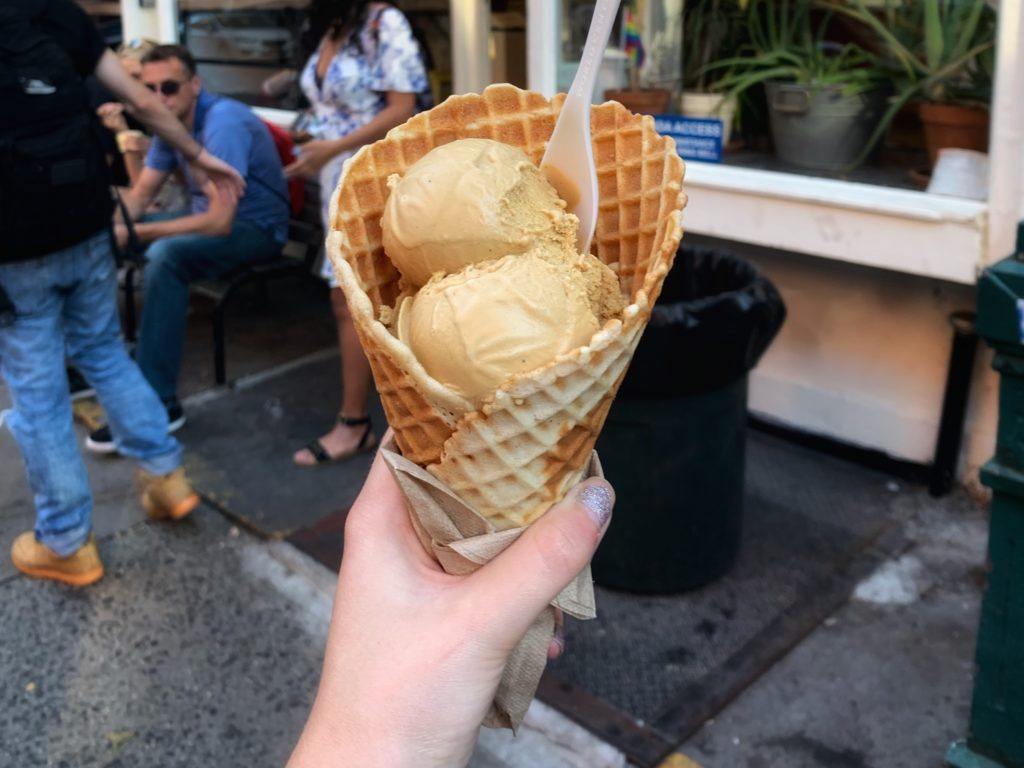 One of the oldest churches in New York is to be found in East Village. Named St. Marks Church-In-The-Bowery, the ecclesiastical building is now the second oldest church in Manhattan and groundbreaking began as early as 1795. Architectural highlights of the church include a 19th-century Greek Revival church steeple and Federal-style church body (with Georgian elements).

Though St Marks was completed and consecrated in 1799, additions were added throughout the 19th-century and extensive restorations were undertaken throughout the 1970s and 1980s. The grounds of the church (both the East and West Yards) contain stone vaults which are the final resting place of many a famous New Yorker. 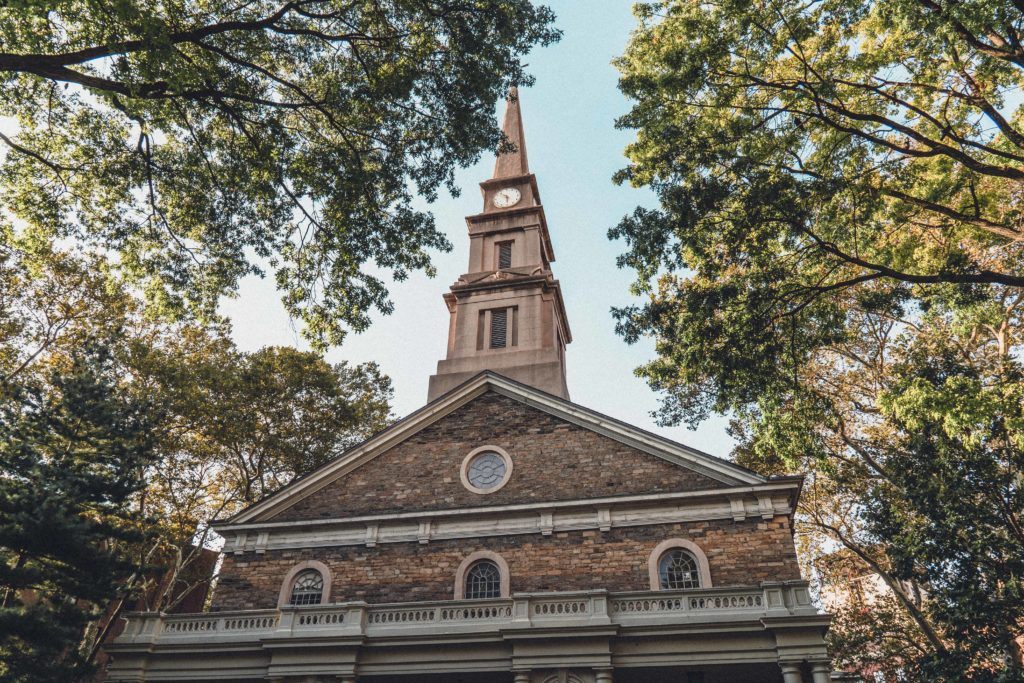 Though less of a ‘hidden gem of East Village,’ than some of the other destinations and locations within this article, it’s well worth noting that there’s a myriad of street art to be seen in and around East Village. Highlights include many a mural like the beach mural of 1st Avenue & East 9th Street.

Situated in the very heart of New York’s East Village, the Yiddish Walk of fame, much like the Hollywood Walk of Fame in Los Angeles and the Calle Ocho Walk of Fame in Miami, comprises of bronze plaques embedded into the sidewalk and is a reminder of the lower east side’s rich and fascinating history.

The Walk of Fame of the Big Apple honours Jewish actors and stars such as Fyvush Finkel and Molly Picon. You see, prior to WWII, this area of Manhattan was known as the Yiddish Theatre District or the Jewish Rialto due to the sheer number of theatre establishments in the area; performances in Yiddish would have included comedies, dramas, original plays, and much more. 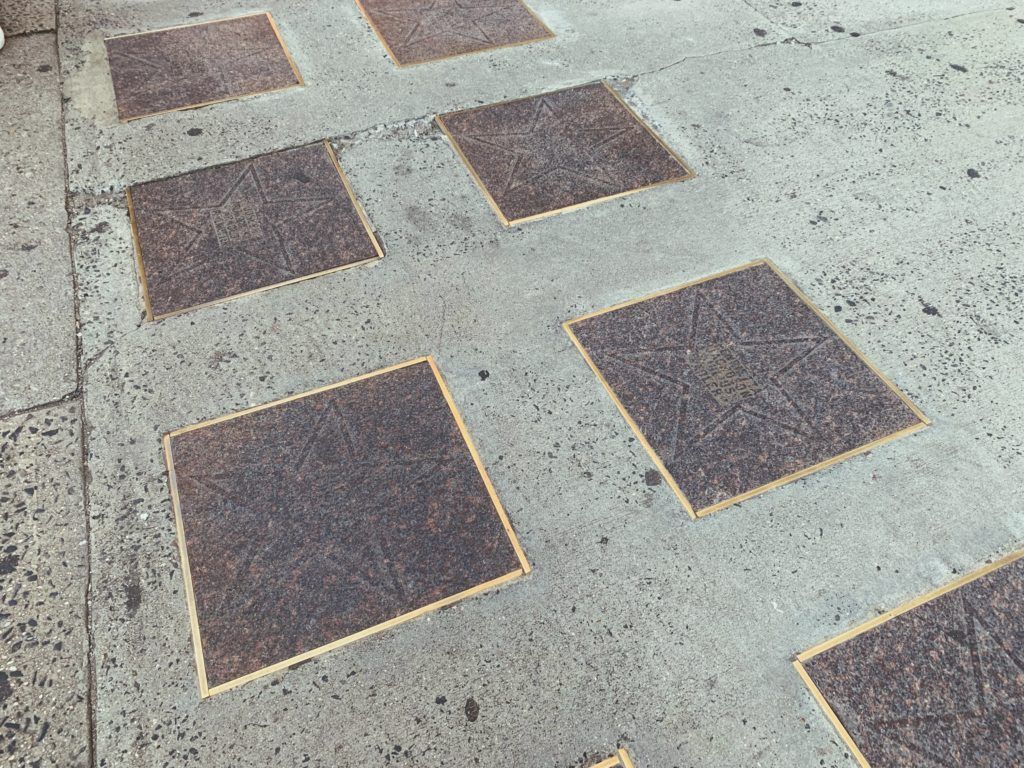 For book lovers and bibliophiles, New York is an absolute delight of second-hand shops and stores so cemented in the fabric of the history of the city that they’ve since become cultural institutions in their own right (i.e. Rizzoli Bookstore).

Of particular note in New York’s East Village is Strand Bookstore, which boasts, new titles, vintage tomes, and second-hand bestsellers stacked across a staggering 18 miles! Wander in during opening hours and you’re sure to leave with a souvenir (or two!) There’s even an impressive selection of New York-themed guides, memoirs, and illustrated guides to help you make the most of your Big Apple visit. 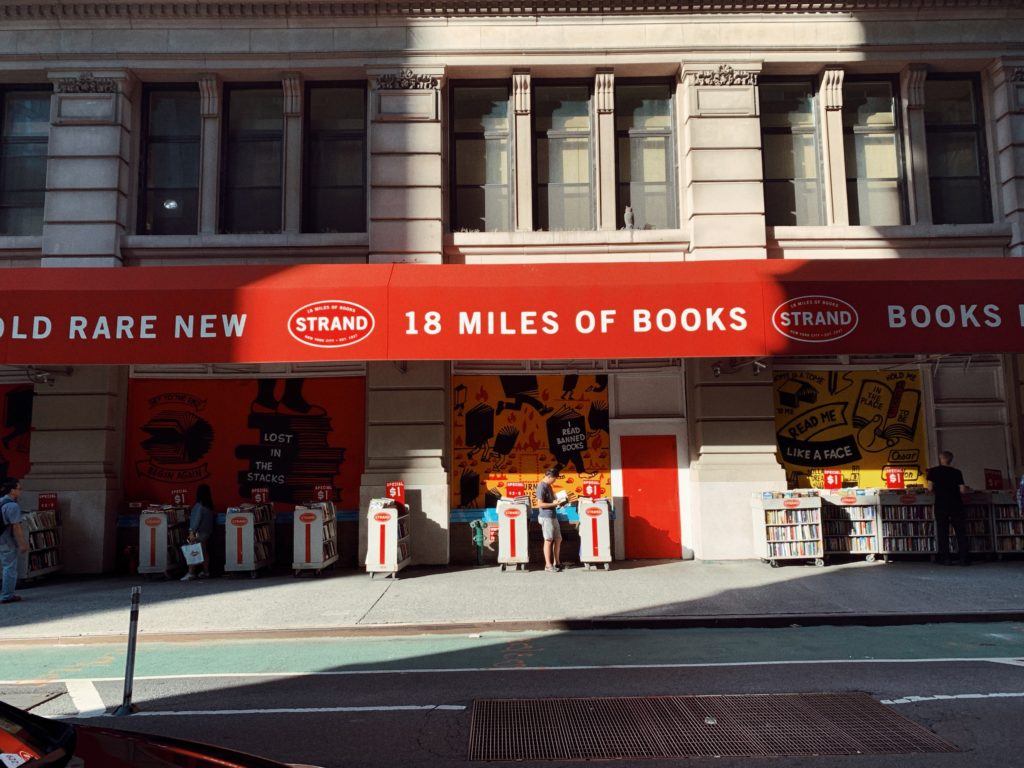 Served by the slice and oh-so-delicious, be sure to head to Nolita Pizza for some of the best pizza pies in the East Village. Self-proclaimed to provide an ‘authentic Italian culinary experience right to your table,’ the slices are well-priced and are made with traditional ingredients. Simply scrumptious! 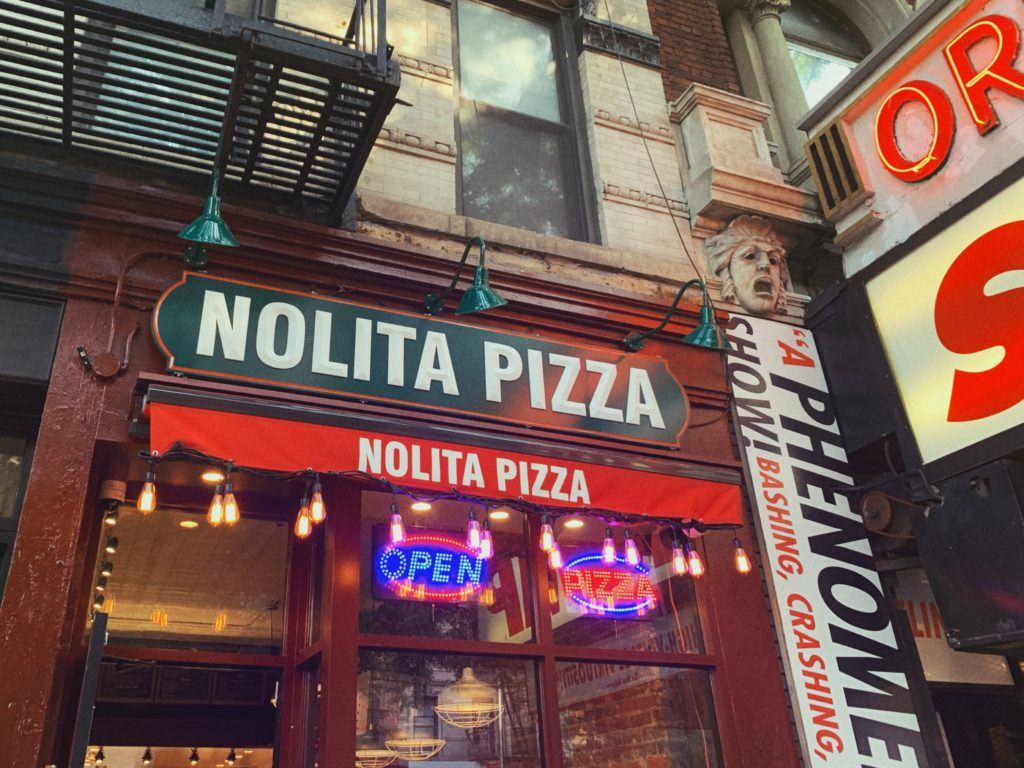 For those who are in search of a little and secluded space which is hidden away from the hustle and bustle of busy New York City life, the Creative Little Garden is a beautiful green area was once an overgrown lot. Situated between Avenue A & B, the Garden is maintained solely through the work of volunteers and hosts regular events throughout the year (including poetry salons!). Discover more details on the Creative Little Garden Facebook page.

Situated in the very middle of East District, Cloister Café boasts a unique foodie experience in the Lower East Side: sip on your drink or eat your food against the backdrop of three Gothic-themed spaces. As well as an outdoor garden, there’s also two indoor spaces which are medieval themed.

The interior of Cloister Café boasts decor such as stained glass windows which were acquired when a nearby church underwent renovations, as well as authentic Gargoyles! Of all the secret spots in East Village, this is definitely one of the quirkiest foodie experiences!

Much less of a well-kept New York secret than even just a few years ago, Please Don’t Tell is a speakeasy-themed bar where the entrance is via a hot dog joint, and more specifically via a telephone booth housed within the East Village eatery! Cocktails are served in a relaxed setting, though be sure to make reservations well in advance as the venue is becoming increasingly popular! 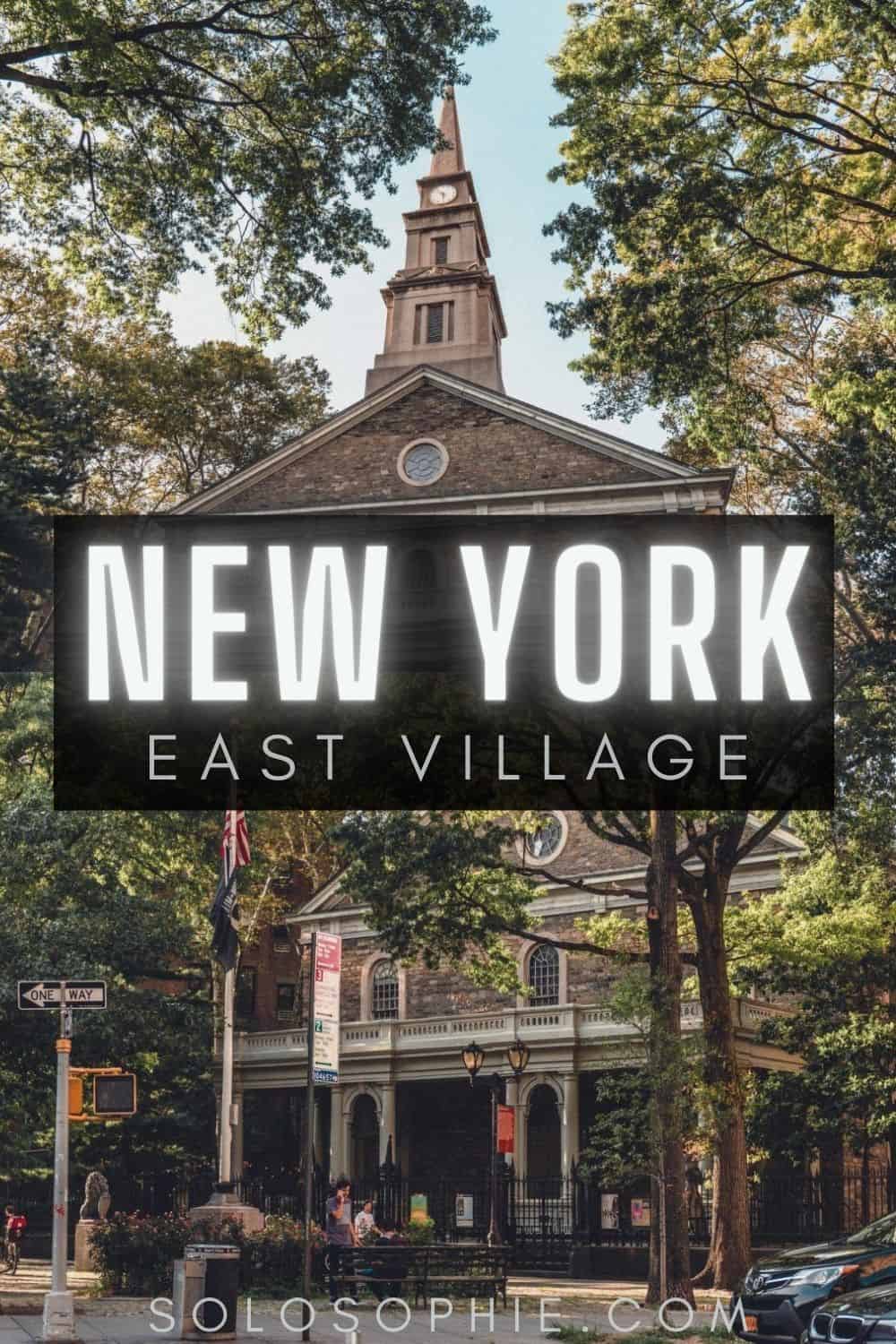 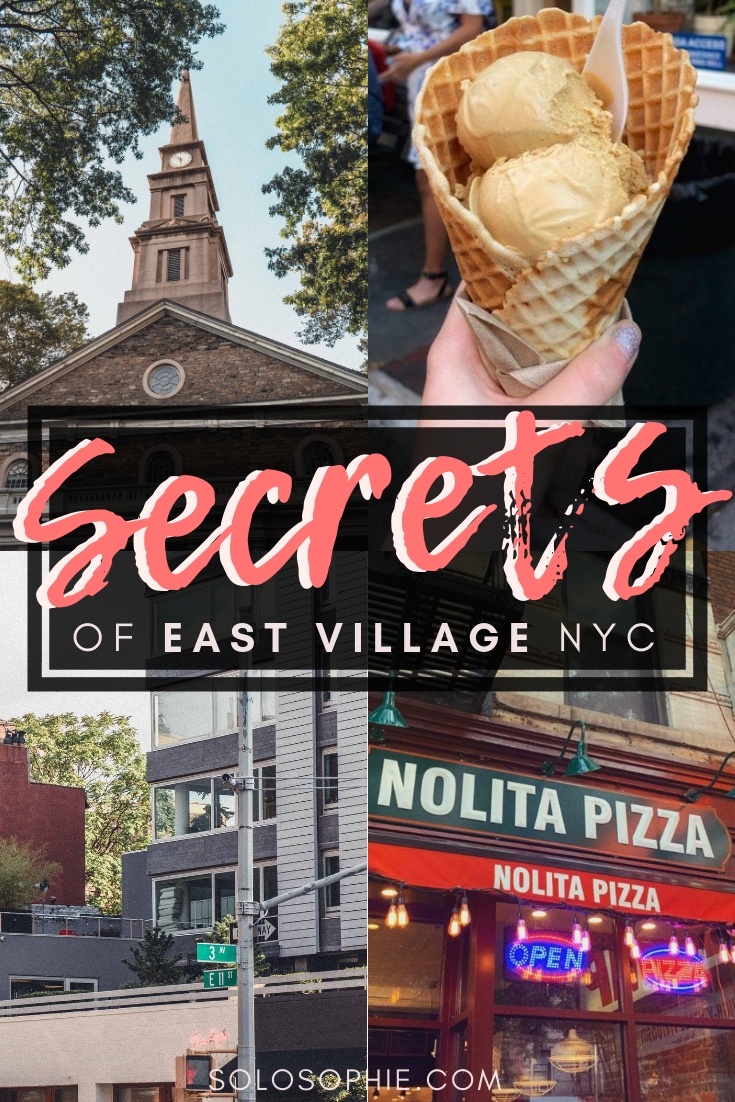 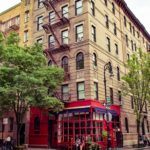 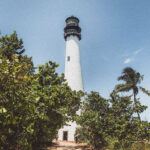 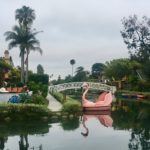 How to Spend One Day in LA: A Los Angeles Itinerary and Guide 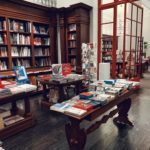