While many people know that JK Rowling studied Classics with French at the University of Exeter (and there’s plenty of Harry Potter inspiration to be found throughout the Devonian city), it’s less-known that she also spent a year of her degree studying abroad in Paris. Here’s a quick guide to Harry Potter in Paris; study abroad, inspiration, magic, and plenty more!

If you didn’t already know, then surprise: Nicolas Flamel was a real person and he lived in Paris during the 14th to 15th-centuries! No one knows of his real-life birthdate, although a surprising amount is known about his day to day life.

Owner of two shops, he married a certain Perenelle in 1368 and it’s unclear as to whether he ever had any actual ties to alchemy. Flamel led a long life, living well into his 80s (pretty impressive for the 14th-century- no wonder the rumours regarding eternal life began). He even designed his own tombstone featuring intricate symbology in 1410.

Although Flamel was originally buried in the Church of Saint-Jacques-de-la-Boucherie, the ecclesiastical building was destroyed during the French Revolution, leaving only the Tour Saint Jacques now standing today. Now, one of the roads leading to Saint Jacque’s tower is named for Nicolas Flamel, while another nearby passage is named for his wife.

During his lifetime, Flamel was primarily a scribe and manuscript seller and all of the rumours, myths, and legends surrounding him likely didn’t emerge until at least two centuries following his death.

The story surrounding Nicolas Flamel and the philosopher’s stone actually arose in the 17th-century Of all the texts attributed to Flamel, Livre des figures hiéroglyphiques, published in 1612 is probably the most famous.

Other texts alleged to have been written by him emerged claimed that Flamel had uncovered the two goals of alchemy: the secret to eternal life and how to turn base metals into silver and gold. The entire story as to how he achieved this is incredibly long, complicated, and more than a little confusing.

In brief, it’s said that he learned all of his alchemical secrets while on a mission to find someone to translate a book for him (too bad that modern translating tools didn’t exist back then)! His journey took him along the Santiago de Compostela in Northern Spain, which is supposedly where he learned all of his secrets…

In the Harry Potter books, Nicolas is the creator of the ‘Philosopher’s Stone,’ a gem said to grant eternal life to its users. Today Flamel’s tombstone can usually be found in the Musée Cluny, a street named for him is located not far from Hôtel de Ville, and the building which he once inhabited, 51 rue de Montmorency is now a restaurant.

Often thought of as one of the oldest stone houses in Le Marais, if not all of Paris, this building was first constructed in 1407. The most famous of all the building’s residents is probably the man made iconic by Harry Potter, Flamel.

Read more: Following in the footsteps on Nicolas Flamel in Paris.

Fans of all wizarding world merchandise will be delighted to discover that there’s now a Harry Potter boutique in the very heart of the city, not far from Grands Boulevards.

Tucked away among the covered passages of Paris in the 9th arrondissement of the city, there’s a huge section of the JouéClub toy shop dedicated to Harry Potter merchandise (including lego, robes to wear, figurines, and even more).

Head to Paris and I can’t promise that you’ll end up studying in Beauxbatons, the French academy where Fleur Delacour once attended. However, if you’re looking to study in a former Château where the architecture is gothic, then the public library of Bibliotheque Forney feels incredibly close to attending Hogwarts!

Though not explicitly mentioned in any texts, of course, for your very own chance to study (or work- we all have lots of e-mails to send!) then you simply need to sign up as a library member of the public libraries of Paris.

The application paper is in French and you’ll need a form of ID as well as a passport style photo (for your shiny new library card), but getting admission is totally worth the form filling!

If you want to get a glimpse of medieval, and oftentimes magical Paris, then you should wander around Le Marais. Spanning the area covering much of the 3rd and 4th arrondissements, this district largely escaped the mass architectural overhaul of Haussmann during the 19th-century.

Instead, this Parisian area is filled with cobbled lanes, narrow alleys, and all the architecture you’d expect to find in old town Europe. Le Marais (literally translated as ‘the Swamp’) is also populated by plenty of antique shops, meaning that you can easily pick up some weird, wonderful, or even magical object.

Elsewhere in the arrondissement, the Musée de la Magie (Magic Museum) is the perfect place to brush up on your History of Magic without a boring and dry lecture from Professor Binns. Instead, this quirky museum in central Paris is open from Saturday through to Wednesday and houses a collection of hundreds of artifacts and objects.

One of Paris’ many magical bookshops

If you’ve never read the books, then a little holiday reading of the Harry Potter series during your Parisian adventure may well be required. Of course, the books are available to purchase in stores worldwide, and if you’re looking to brush up on your French, you could always purchase “Harry Potter à l’école des Sorciers”

The secret villages of Paris permit you to escape the hustle and bustle of real life, just as the books so did. While these are in no way associated with the world of Harry Potter, they’re little pockets of magic in one of the biggest metropolitan areas of Europe.

Some of my favourite secret spots in the city include the aptly named green space of Cité Florale, and one of the last remaining vineyards in Paris at Butte Bergeyre. The best time to see the villages of Paris is undoubtedly in the spring when the wisteria is out and the cherry blossoms are in full bloom.

Read more: Secret villages in Paris you simply MUST visit for yourself!

Take a day trip to London

Of course, if you’re a little short on time but want to experience the bright lights of London, then a day trip is not at all out of the question. If you take the Eurostar between the two capital cities, then you’re in for a long day of travelling.

However, if you want to see some of the city’s key sites, including oodles of filming locations from throughout the movie franchise (think Leadenhall Market, Millennium Bridge, and more), then a day trip is worth the travel time!

Read more: Alohomora! Your guide to unlocking all the Harry Potter locations in London…

Located in the Latin Quarter of the city, Musée de Cluny is situated on former Roman Paris and offers a glimpse into medieval Paris. An ancient buildings built close to the old Roman bath houses, those with keen eyes may well spy the Lady and Unicorn Tapestry, a series of six tapestries woven in silk in the 16th-century.

Keen eyes may well spy that exact replicas of all six tapestries were used to decorate the walls of the Gryffindor common room in the Harry Potter films. Whether you’re a Harry Potter fan or not, the Musée de Cluny is most certainly one of the top museums to visit in Paris.

Enjoyed reading about where to find Harry Potter in Paris? Pin it now, read it again later: 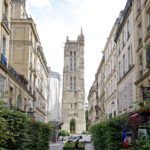 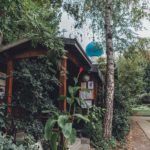 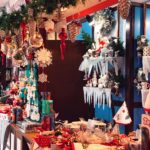 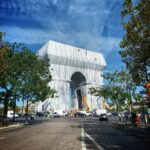