New, vintage, old and rare. Whether you’re looking for novels, short stories, geography tomes or volumes covering the complete works of Shakespeare, here are the very best English Language bookstores in Paris which you’ll want to shop at on your next trip to the French capital city.

All shops on this list mainly cover Anglophone books and are filled with literary treasures that you’ll want to read. After all, with their reading nooks and locations near green spaces, there are plenty of little reading spots to be found in and around these bookshops.

Founded in 1997, the SF book company is situated on the left bank of the city not far from Odeon, and the Sorbonne University, as well as some of the chicest cafés in the city. The shelves of the store are filled with all kinds of books; mystery, non-fiction, books about France, history, theatre… You get the idea! Many books are second-hand, used, and can be purchased at a reasonable price.

Tucked away in the very heart of the Latin Quarter, The Abbey Bookshop is an unexpected find in a maze of small streets, clustered churches and all the eateries. Founded in 1989 by Canadian Brian Spence, today The Abbey Bookshop is one of the very best, as well as the most popular English language bookstores in Paris.

Filled from floor to ceiling with all manner of new, vintage and used books, the books even flow over into the street. And with freshly brewed coffee always waiting and over 35,000 works in English, you’re more than likely to leave with a book or two!

Please note that, as of early 2020, Berkeley Books of Paris is closed until further notice.

Opened in 2006, Berkeley is all about books, books, and more books, obviously! It’s an off-shoot of the wildly popular San Francisco bookshop in that its three co-founders all met while working at the American bookstore.

In the mid-2000s the three entrepreneurs’ dreams came true and now the shop specialises in rare and vintage books, which a particular focus on English language books.

The most famous of all English Language Bookstores in Paris, Shakespeare and Co. is actually the second bookshop of its name. The first and original Shakespeare and Company was founded in 1919 in the Saint Germain district of the city by Sylvia Beach.

The English language bookshop was frequented by all the anglophone literary greats of the time, and is even described in Hemingway’s ‘A Moveable Feast.’ Gertrude Stein and James Joyce, among others, were also known to frequent the store.

Unfortunately, the store was closed during the Nazi occupation of Paris and was never reopened. When George Whitman opened his store in 1951 along the banks of the Seine, he named the shop ‘Shakespeare and Co.’ in homage to the original store.

For those wishing to sip on some coffee or enjoy a slice of cake with their purchases today, Shakespeare and Co. now owns the café next door to its two independent offerings. Just across the River Seine, you’ll find Notre Dame, and closer still, you can find the oldest tree in Paris.

If you love aesthetically pleasing bookstores, then head to Galignani. Neatly stacked shelves and potted plants are abundant, as are quiet reading corners and the decor dates all the way back to the 1930s.

In 1801, Giovanni Antonio Galignani, a descendant of the Galiganis who had first introduced wider audiences to the written word in the 16th century, opened a bookstore on Rue Vivienne in Paris.

Inside, there was a reading room which specialised specifically in English language books, making it perhaps the first English Language bookshop in the French capital.

Though not an independent bookstore like some of the other shops listed here, Smith&Son (formerly WHSmith up until 2021) is indeed yet another English language bookshop you’ll want to check out in the city if you’re in search of new releases or, indeed, other English supplies.

And with over 70,000 books on the shelves, the Parisian bookshop is also the largest English language bookstore in Paris. As well as being a one stop shop for the newest book releases in the UK, the Paris-based store also sells a wide array of other British goods.

This includes foodstuffs (though they’ll cost you much more than you would pay for the same goods back in the UK!), and magazines. As such, if you’re looking for proper salt and vinegar crisps or some real cheddar cheese, then be sure to head to WHSmith.

Filled with a large selection of fiction novels, non-fiction books, and everything in-between, one of my all-time favourite English language bookshops is that of The Red Wheelbarrow.

Situated close to Jardin du Luxembourg, it couldn’t be easier to purchase a book and head to the nearby green space to enjoy its pages surrounded by a little bit of nature.

For those looking for beautiful coffee table volumes, you need to look no further than Taschen. Though not strictly ‘only’ an English language bookshop, Taschen sells books in a variety of languages, including English, German, and French. One thing to note is that, since these are coffee table books, they might be a little on the heavy side when you’re trying to transport your luggage home. 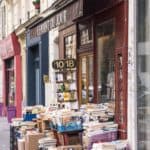 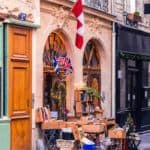 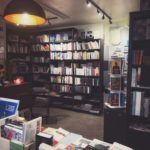 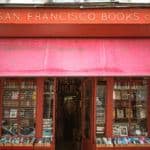