Remember that guy, Nicolas Flamel, from Harry Potter that creates an elixir that lets you live forever? The elixir that Voldemort was willing to kill for?  Well, Nicolas Flamel was a real person. And he lived in Paris! You can even still see his house today… Here’s a brief history of who Nicolas Flamel was, as well as how you can follow in the footsteps of the famous alchemist to this day… 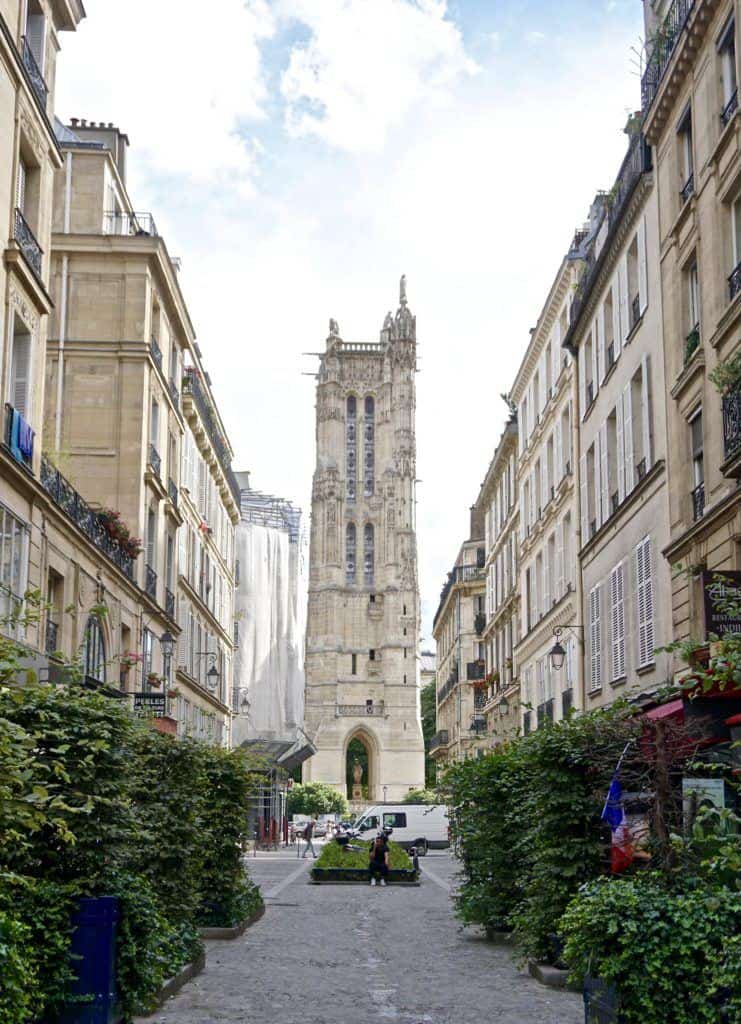 Who was Nicolas Flamel?

Although Nicolas Flamel’s alchemy skills probably weren’t as powerful as the legend suggests (if he even dabbled in alchemy at all!), he was an acclaimed scribe and manuscript vendor. Nicolas Flamel also remains one of the best-documented personalities of medieval times, meaning that we have plenty of records about him.

Born in around 1330 in Pontoise (a town North-West of Paris), Flamel eventually ended up running two shops in the centre of Paris. In some records, Nicolas Flamel is recorded as ‘Nicholas Flamel’.

This is simply a misspelling and the two people are one and the same! In 1368, Flamel married a twice widow and wealthy woman, Pernelle. The couple often made considerable donations to local churches and were well known for their philanthropic endeavours. 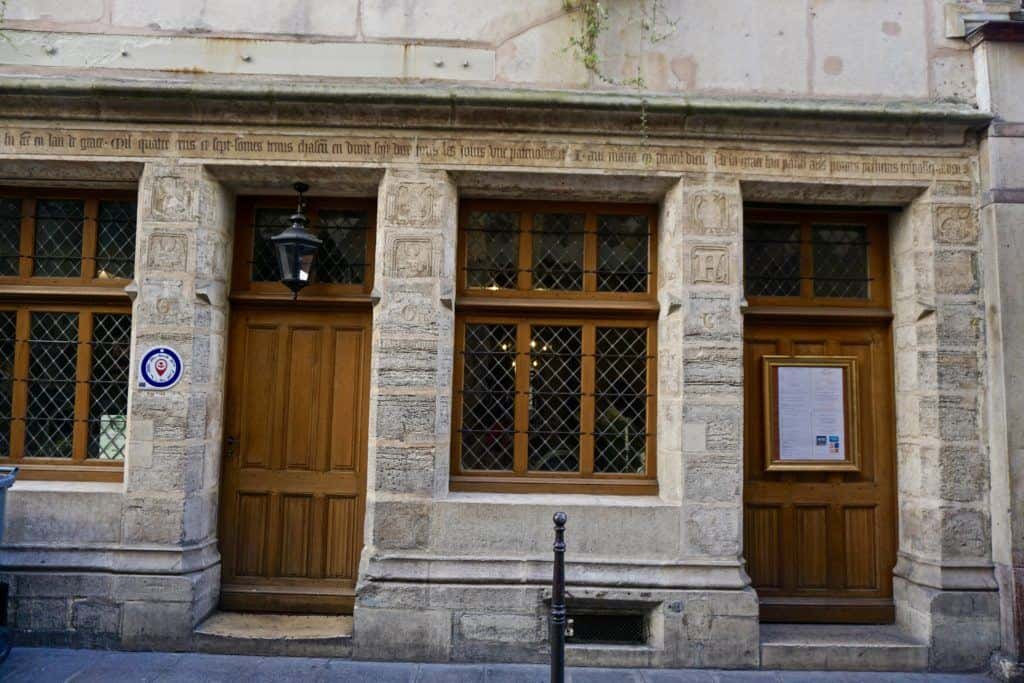 Who was Nicolas Flamel’s Wife?

Nicolas Flamel had a wife named Perenelle Flamel. She lived from 1320 to 1397 and was married to Nicolas Flamel from 1368 until her death (Perenelle died before Nicolas). Though few details are known about Perenelle’s early life, what is known is that she was actually married twice before she married Nicolas and both husbands had died, leaving her a fairly great sum of money.

With her wealth, she became a great benefactress and supported the creation of many religious sculptures, as well as the construction of religious hostels and churches. It wasn’t until the 17th-century, when the legend of Nicolas Flamel being an alchemist emerged that Perenelle, too, was said to also be involved in alchemy.

Was Nicolas Flamel an alchemist?

It is now widely believed by academics that it wasn’t until hundreds of years after Nicolas Flamel’s death that he actually earned the reputation of being a powerful alchemist. Although Flamel may have had a go at some basic alchemy, the legends are more likely to be fables, fairytales from the 17th century.

The rumours that Flamel had managed to create the philosopher’s stone (otherwise known as the elixir for eternal life) were perpetuated by the fact that he lived until he was in his 80s. This was almost unheard of in medieval times, but his age was probably a result of being wealthy and having access to proper food and shelter, etc.

All things being said, it must be noted that Flamel was also a little more than fascinated by death. At the beginning of the 1400s, Nicolas even designed his own tombstone. You can see the gravestone today at the Musée de Cluny in the Latin Quarter. His will doesn’t suggest that he died vastly wealthy, and yet his legacy lives on… 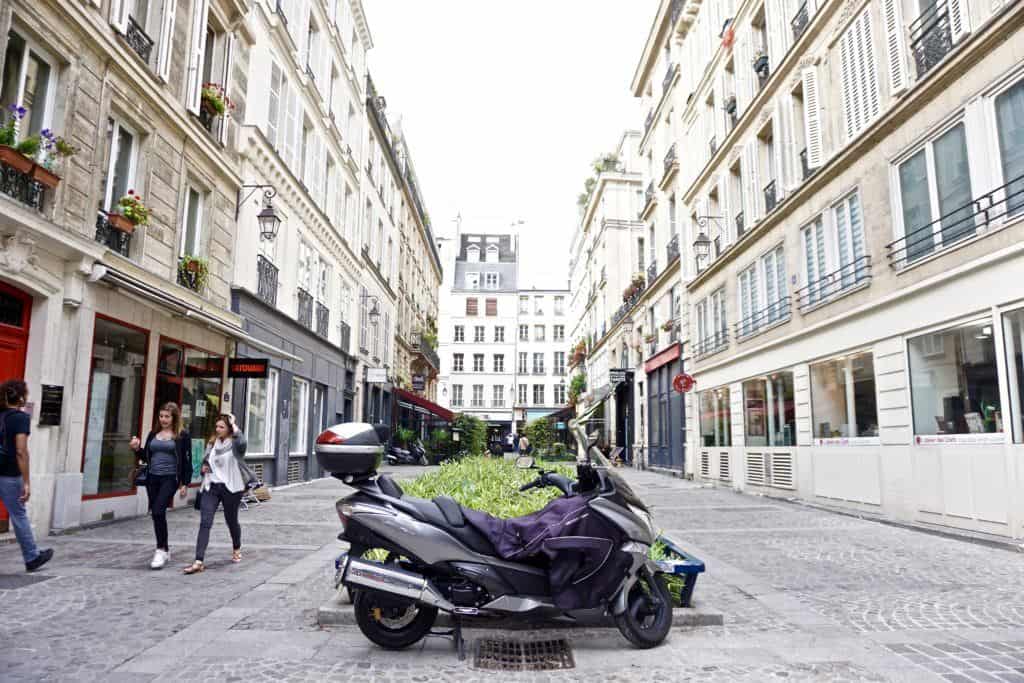 What is the Flamel Cross?

The Flamel Cross refers to an alchemical symbol which depicts a cross with a snake or serpent draped around it. Above the cross, detached wings and a crown are clearly visible. More commonly, the cross is referred to as the Serpent Cross, although it has never actually be associated with the real life Nicolas Flamel.

Though Nicolas Flamel was 666 at the time of his death in the Harry Potter books, the real life man only lived until he was in his eighties. JK Rowling studied Classics with French at the University of Exeter in England, and it was here where she partook in a study abroad programme that transported her to Paris.

It was probably during her time living in the City of Light, that JK Rowling first heard of Nicolas Flamel. if you’re curious to learn more about magic in the French capital, here’s a guide to finding Harry Potter inspiration in Paris.

Today, one of the best examples of Medieval Paris can be found in the form of Hôtel de Sens. Situated in Le Marais and close to the Seine, this building was once home to the Archbishopric of Sens. Now, the former middle ages mansion houses a library dedicated to the decorative arts and you can visit for free. Curious to know more? Here’s a peek inside Bibliotheque Forney… 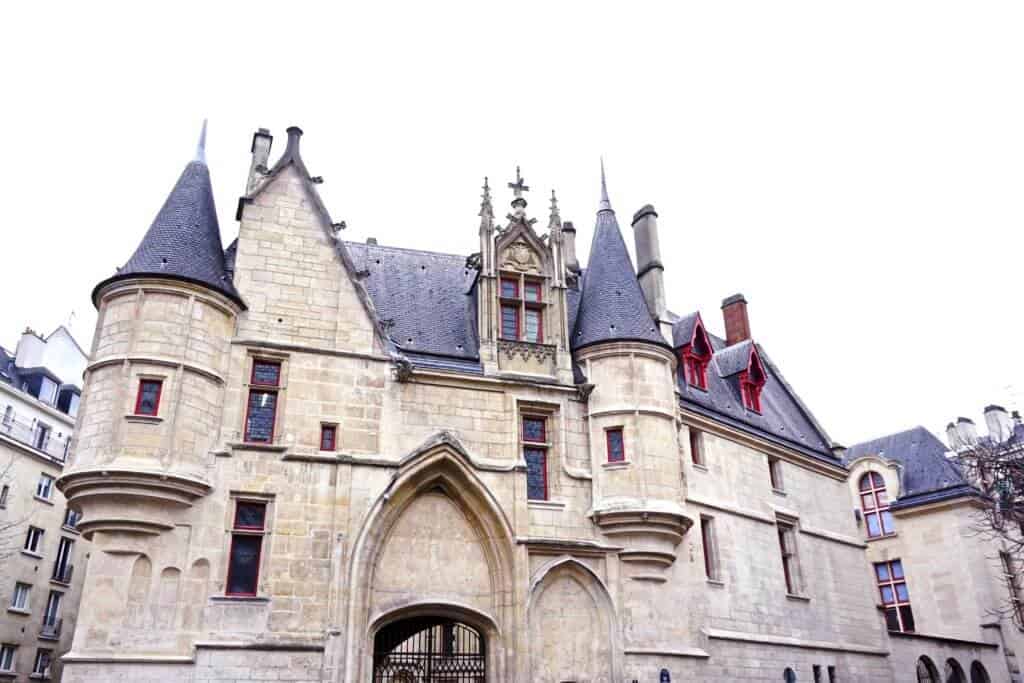 Where to find Nicolas Flamel in Paris Today

Close to Chatelet and near Tour Saint Jacques (the only remaining tower of a once grand church close to Hôtel de Ville), two roads have been named for Flamel and his wife. I think that it’s really lovely that they intersect so that the two lovers are together forever.

Filled with cafés and green spaces, the roads are picturesque Parisian streets and the perfect place to have a café. Nearby attractions include wandering along the River Seine, exploring Le Marais quarter of the city, and experiencing the shopping area around Châtelet. 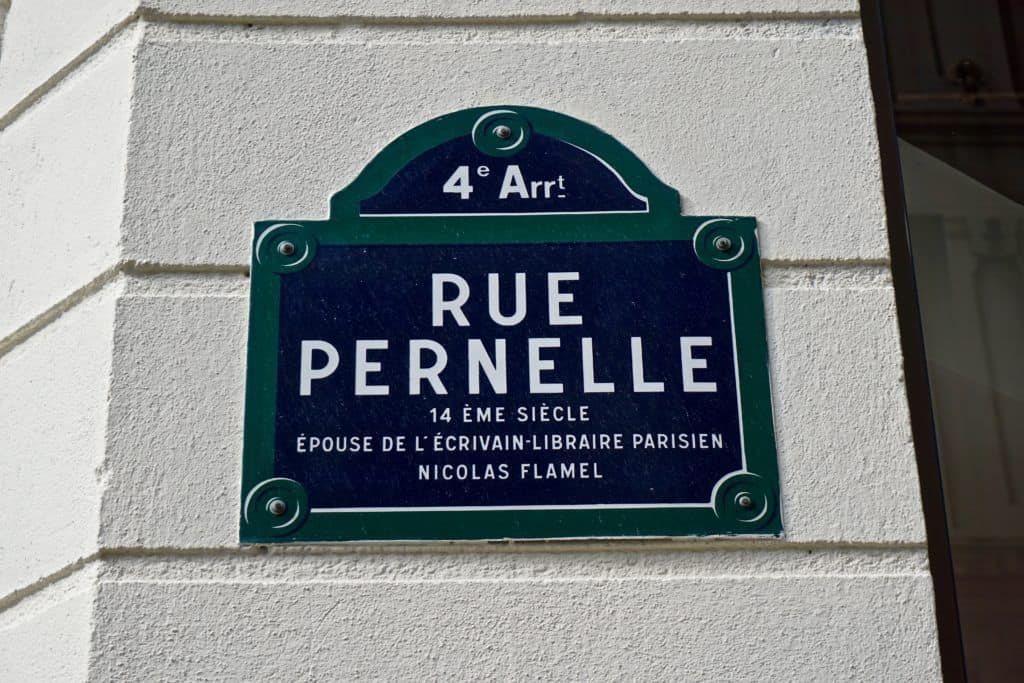 Down a winding, cobblestone lined road in Paris, lies a rather unusual house. In fact, this house has stood here in its entirety since 1407. The address is 51 Rue de Montmorency and it is now the site of a restaurant/ hotel which has particularly good ratings online.

It is the best known and only surviving house that the Flamels, who were famed for their philanthropy, owned. Sadly, Flamel’s wife, Pernelle died decades before him, in 1397. Following her death, he decided to build the house that still stands there today.

After it was discovered that the house at 3 Rue Volta was actually a replica of a much older house, Flamel’s stone house in the centre of Le Marais became the official oldest house in Paris. If you’re looking to explore more of this arrondissement in depth, then be sure to take this free and self-guided Le Marais walking tour of medieval Paris! 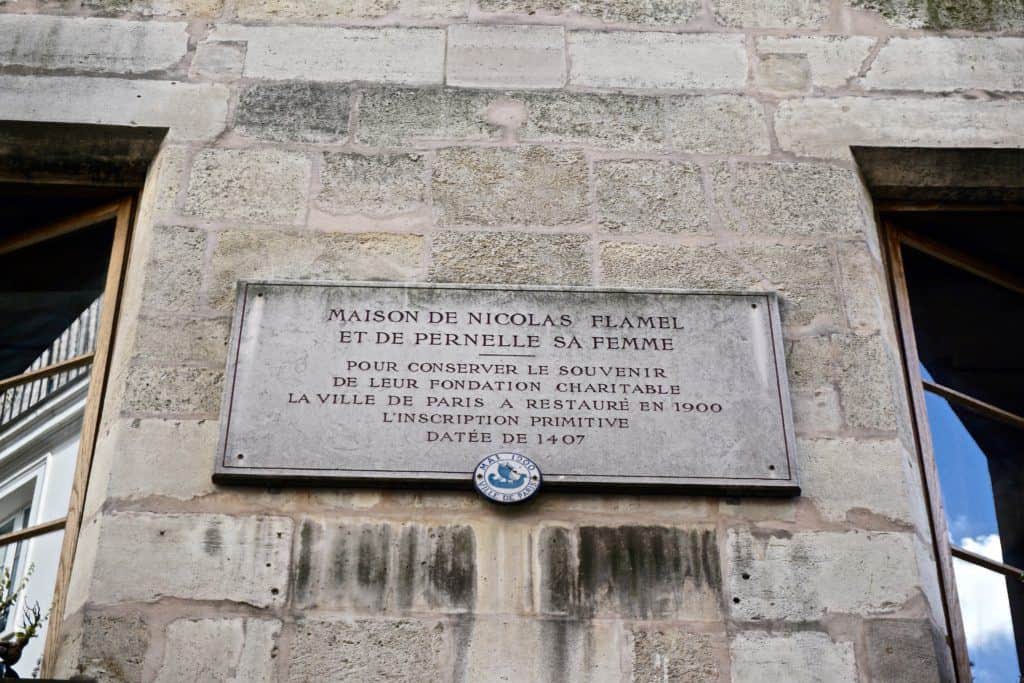 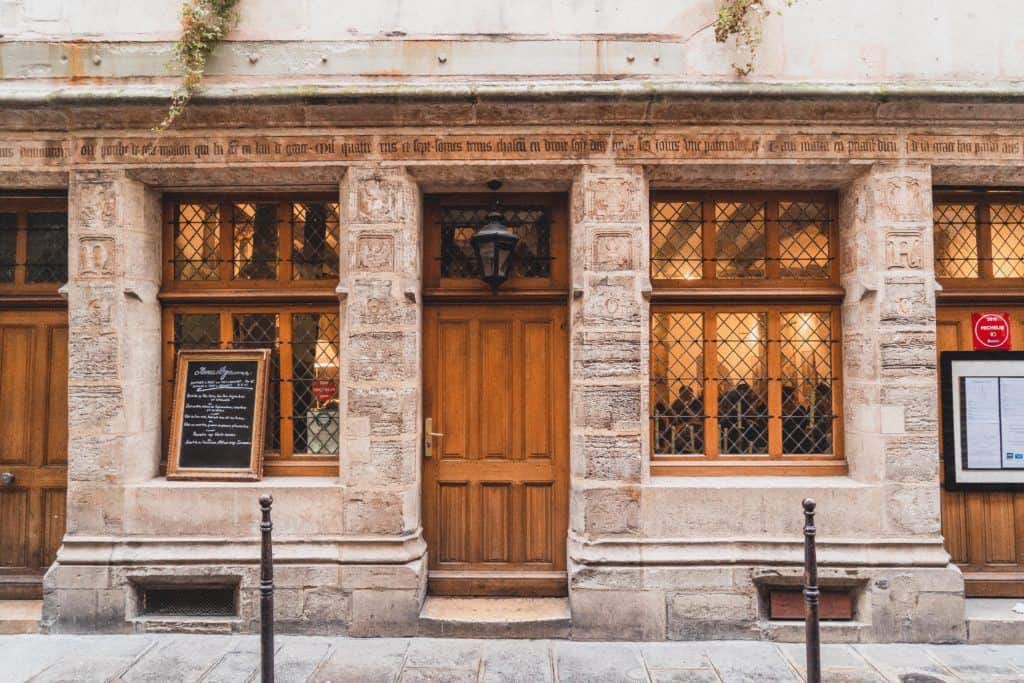 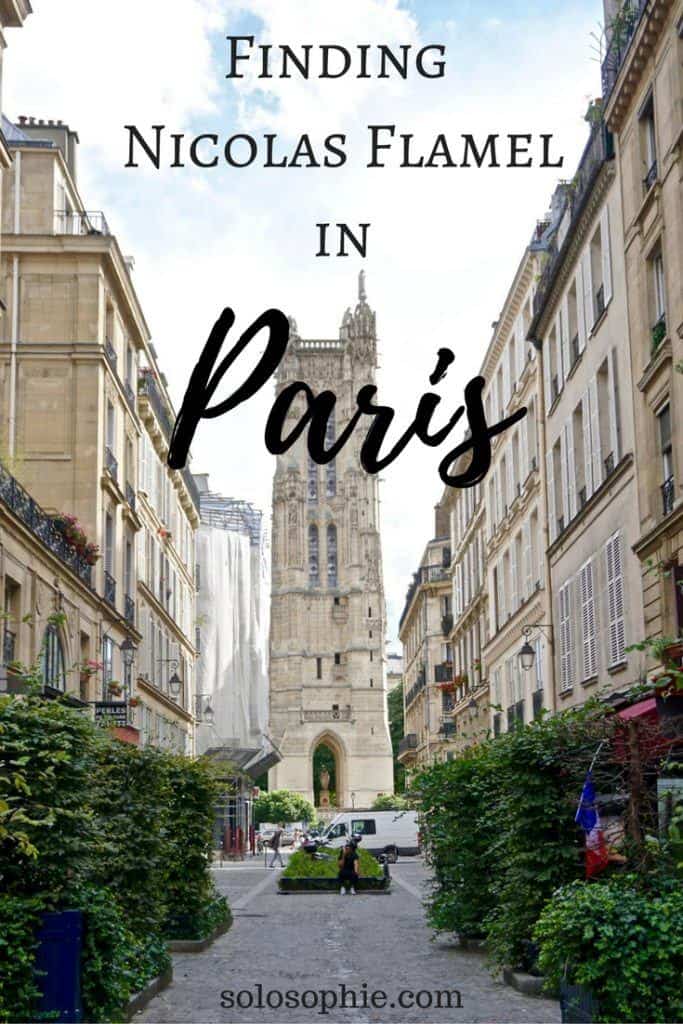 Hello thanks.is there translation of the Tombstone of Nicolas Flamel in English language? Best Regards Ali

I also recommend if you like fiction mixed with historical fact you should read Secrets of the Immortal Nicholas Flamel. Its an amazing series that includes Nicholas Flamel Perenell Flamel joan of arc scotch and many more figures from mythology and history

Absolutely loved this. I LOVE HARRY POTTER, so this was fascinating. I'll need to find this when I return!

This is so awesome!! I can't wait to see what else you post under your Harry Potter Tag :)

How on earth did you ever dig this information up? I LOVE stuff like this. So much of what Rowling wrote was based in history and I never get tired of hearing about it.