Picture perfect Provence has been a dream destination for travellers for centuries. And once there, it’s easy to see why. Breathtaking mountainscapes are crowned by fortified castles which, in turn, give way to meandering waterways and medieval towns. Here’s your ultimate guide on how to spend the perfect 5 days in Provence by taking the Eurostar from London to Avignon!

#ad | This post is written in collaboration with Eurostar and @London. However, all words and opinions are my own.

How to get from London to Avignon with Eurostar

You may well not know this, but once a week, from May until September every year, Eurostar offers a direct service between London and Avignon. No getting off, no lengthy queues, no switching trains: pure relaxation right up until the moment the train pulls into the Avignon TGV station.

And at under six hours journey time, reaching Avignon from London is closer than you’d think. More details about London to the South of France here. We personally journeyed in Eurostar Standard Premier, which meant two delicious meals en route, plenty of coffee, and even a glass of wine!

Trust me, the upgrade is worth it! Between chatting, spying fairytale castles out the window, and reading the countless magazines Eurostar has aboard, the journey couldn’t have gone faster. Before we knew it, we were packing our cases into taxis and whisked away en route to the walled city centre.

It’s an early start at St Pancras International, but don’t worry… There’s plenty of coffee and croissants on the other side of check-in and passport control! Those travelling in Standard Premier need only be at the station 45 minutes in advance, while those travelling with Business Premier have the flexibility of arriving just ten minutes before departure!

The train journey takes just 5 hours 49 minutes, and before you know it, you’ll be in Avignon sipping on a glass of crisp rosé. Once you’ve checked into your hotel, be sure to wander around the town. Free maps with suggested themed walking routes are available at the tourism office (41 Cours Jean Jaurès) so make the most of it.

After all, this is your chance to see the city’s many churches, museums, and explore some of Avignon’s hidden gems. Tomorrow may be about sightseeing in Avignon, but today is about relaxing and getting to know the city on a deeper level! If you need a little caffeine, then Café Tulipe serves the best coffee in town!

In terms of what to do on your first day in Provence, I personally recommend walking up to the Rocher des Doms for one of the best views of the Pont d’Avignon. There’s even the chance to spy a secret vineyard! The Pope’s Vine was planted in 1997 and the grapes grown represent the four main varieties of the Côtes du Rhône.

Other hidden gems in Avignon worth noting are the Église Saint Didier (where Saint Bénézet is buried) and the free-to-visit secret set of cloisters beside Église Saint-Symphorien-les-Carmes.

Otherwise, be sure to find yourself a little time to visit the Cathédrale Notre-Dame-des-Doms d’Avignon (Avignon Cathedral) which dates back to the 12th-century and is constructed in the Roman Provençal style. Thanks to the cathedral’s position next to the Palais des Papes, you’ll easily spot it!

Spend the morning enjoying the best of Avignon attractions. Take the time to stroll around the 14th-century Papal Palace, and of course, make your way onto the bridge. If you’re planning on enjoying both destinations, then you can even purchase a combi ticket and save yourself a few euro in the process.

Although the walled Provençal city has been inhabited for millennia (and was even once known as Avenio during the Roman Era), the town truly rose to fame with the arrival of the popes during the 14th-century.

Seven successive popes lived in the city between 1309 to 1376. Today, you can explore the well-preserved painted rooms of the Palace and imagine what it must have been to reside in the city all those centuries ago.

Nearby, the Pont d’Avignon is easily one of the most famous bridges in France, if not all of Europe. And not just because its half-washed away remains have since become a symbol for the city. Instead, the famous French nursery rhyme ‘Sur le Pont d’Avignon’ is learned and sung by French children all over l’Hexagone and dates back to the 15th-century.

Perhaps rather interestingly, the song is meant to be ‘sous’ (under) rather than ‘sur’ (on) as, during the Middle Ages, there would have been a small island in the centre of the River Rhône. After seeing the bridge and Palais des Papes, it’s time for lunch!

Post lunch, it’s just a forty-minute walk (and even less if you take the bus) to the nearby fortified town of Villeneuve-Les-Avignon. Picture perfect and straight off a postcard, wander here and you can expect to find cobbled lanes, unrivalled views of Avignon, and even a 14th-century fort where you can meander along the ramparts.

For one of the best views of the Papal Palace back in nearby Avignon, you need only La Colline des Mourgues Park. Otherwise, the Saint-André Gardens next to Fort Saint André are listed as a Remarkable Garden of France and surround a Benedictine monastery.

After exploring the city that was once known as Avenio and then strolling to the nearby fortified city of Villeneuve-Les-Avignon in day two of this Avignon itinerary, it’s time to head out into the countryside to explore more of what Provence has to offer by car. Should you opt to visit Avignon with Eurostar, you’ll also benefit from 10% off rental services with Hertz.

Start the morning by driving around forty-five minutes to visit Les Baux de Provence. Widely regarded to be one of the most beautiful villages in Provence, the upper town of this historic settlement has just a few dozen residents. Well-preserved and dating back centuries, the little pedestrian streets hide hidden churches, small chapels, and many a boutique shop.

This interactive art museum is quite literally built into the mountainside; in a former quarry whose stone was used to build the houses above. If you want to go but also want to beat the crowds, then book your tickets in advance, at least 24 hours before! If you’re looking for a guided excursion from Avignon to Les Baux de Provence where all of the details are taken care for you, then consider booking a guided tour like this one.

After a meander around Les-Baux-de-Provence in the morning, hop back in the car and it’s another hour-long drive to the historical and fortified city of Aigues-Mortes. This walled city is in Occitanie and was founded in the 13th-century by Saint Louis for the purposes of creating trade routes with countries beyond France.

After all, one of the greatest resources of this area are the massive salt lagoons that turn the sea red. Today, Aigues-Mortes has a population of under 10,000 residents and truly feels like stepping back in time.

Must-see attractions of the town include strolling around the city’s ancient ramparts, enjoying unparalleled views of the nearby Camargue, and stepping inside the Gothic cathedral.

If you make it your mission to visit just one wine destination while in Provence, or simply take one day trip from Avignon, make it the world-famous Châteauneuf du Pape. Once the summer home escape for the Popes in nearby Avignon, today all that remains of their once grand Château are two crumbling walls presiding high above the rest of the town.

Start your wine route at this stunning lookout point. From here, you can admire the many vineyards spilling out endlessly into the distance. Be sure to look down too. The river-polished stones that line the vines of the Châteauneuf-du-Pape vineyards are unique to this region and not only aid in heating up the plants, but also allow for great water drainage.

We personally took a wine tasting tour with Romain Gouvernet from Provence & Wine tour company. Romain is ever-so-knowledgeable about the region, and after a brief talk about the varieties of grape grown there and the climate of the area, it was time to visit a couple of wineries.

First up was Château de Vaudieu, where we tasted rich reds in the grounds of a 17th-century château. Then, it was onto Domaine Roger Sabon, where we sipped on wines in the centuries old wine cellar where the wine is aged in a carefully controlled climate.

If you don’t have access to a car or simply want all of the nitty gritty details such as transport to be taken care of for you, then you might consider booking a tour from Avignon to Chateauneuf-du-Pape like this one.

Finish your stay the right way by embarking on an epic food tour around the city. Taste the best of Provence on a plate: think lavender-infused chocolates, crisp wines, mouthwatering-cheese, and the kind of olives you could eat all day, basking under the warm Provence sun.

We personally took a tour with Avignon Gourmet Tours and I couldn’t recommend booking a walking foodie tour with Aurelie more. If you’d prefer restaurant recommendations for your full trip, you might even consider booking the food tour for your first full day in the city.

The morning began with a melt in your mouth crumbly croissant and ended with a feast celebrating local produce from the city and the region beyond. Avignon is perhaps most-famous for being a walled city in France and so it’s worth noting that history and ancient architecture is never too far away in this Southern France settlement.

Those who are looking to discover even more about the history and culture of Avignon together with a local guide might consider booking a guided walking tour with wine tasting like this one.

Heading back to London

After a mouth-watering morning, it’s time to gather your belongings and head to the Avignon TGV station to board the train back to the UK. The return train journey to London from Avignon with Eurostar pulls out the station at just before 4 PM on a Friday afternoon and you’re back in London during the evening, allowing you an extra morning and lunch to explore the Provençal city.

Enjoyed reading about how to spend 5 days in Provence? Pin it now, read it again later: 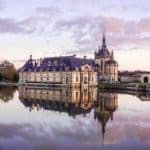 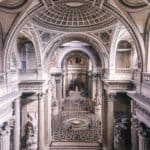 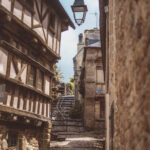 A Guide to the Best Things to do in Auray
2001 shares
Click here to cancel reply.