Villa Léandre is situated in the 18th arrondissement, just a few minutes walk away from attractions such as Place de Dalida, Musée de Montmartre, and La Maison Rose. Though close in distance to some of Montmartre’s most iconic destinations, one wander along this impasse and you’ll soon find yourself transported into another world: that of Paris of the past… 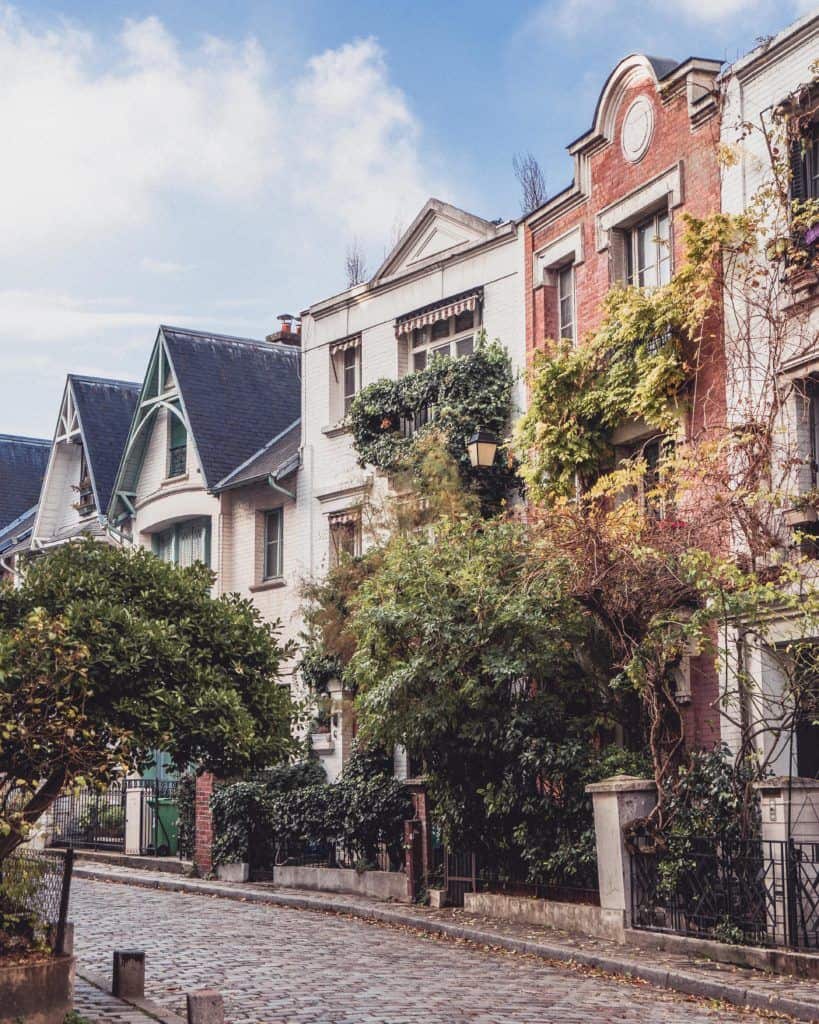 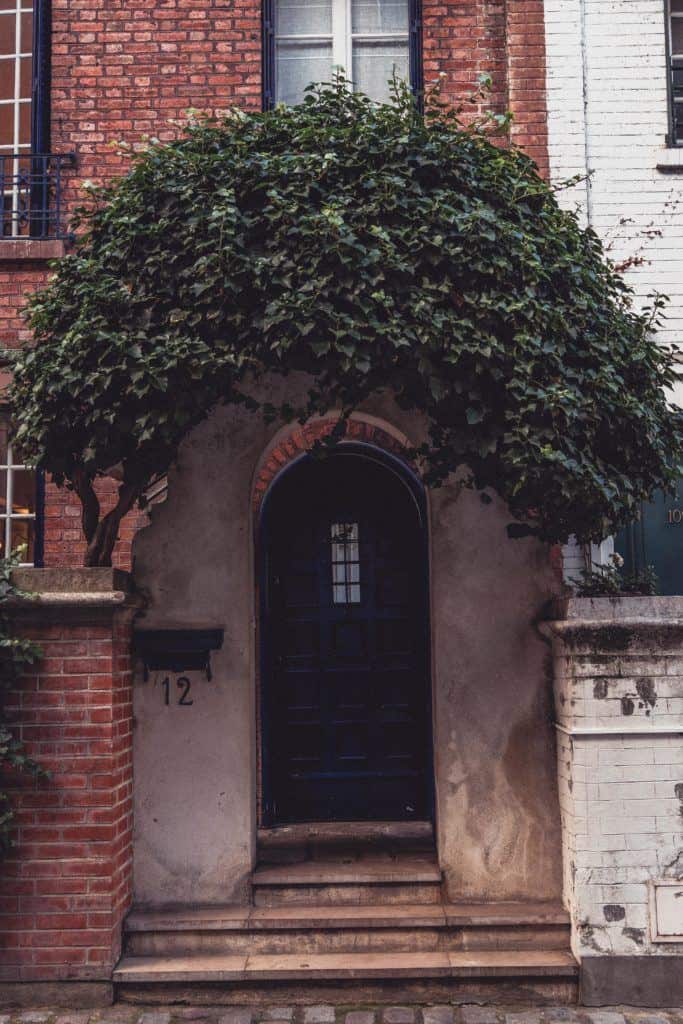 A history of the Villa Léandre road

Prior to the street’s construction on the slopes of the butte in 1926, a windmill could be found there, that of le Moulin des Prés. Built of wood at the beginning of the 18th-century, records suggest that the windmill was still standing up until at least the 1770s.

Once upon a time, Montmartre was a hilltop village. Filled with vineyards, rolling green hills, and plenty of windmills, today just two survive of the lost windmills of Paris. Meanwhile, there is only one vineyard left in the 18th arrondissement, that of Le Clos Montmartre. 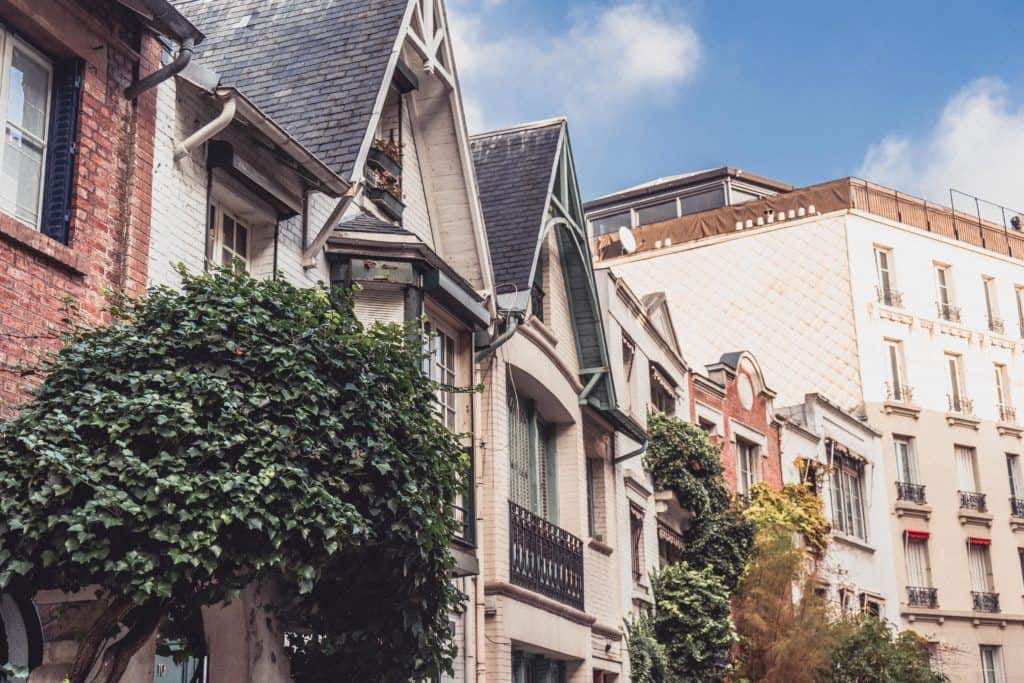 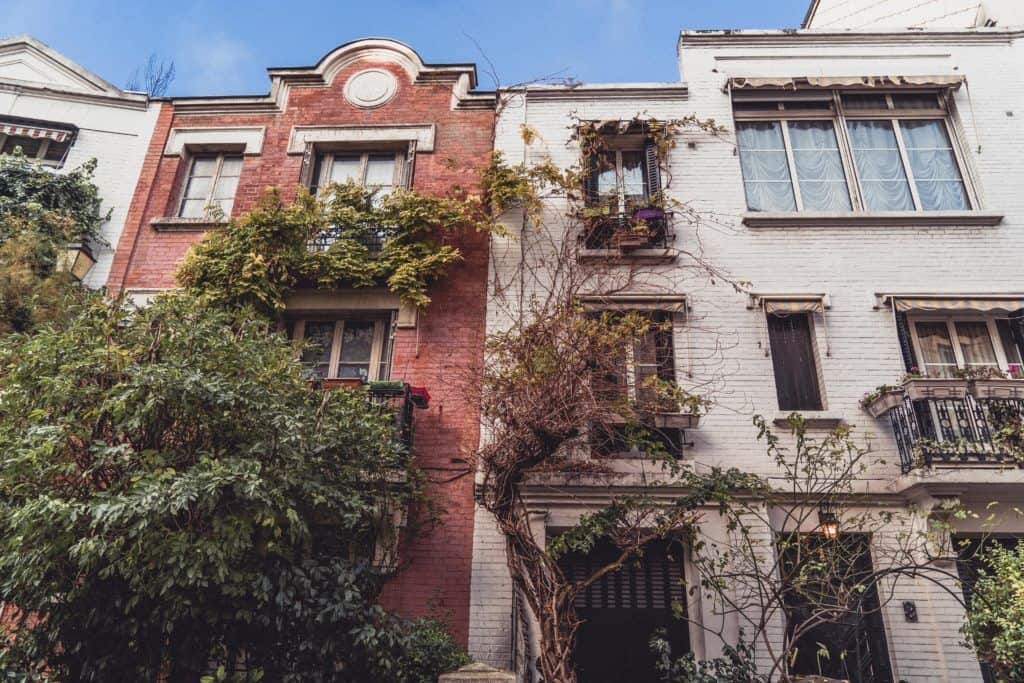 Though there is a little bit of a debate online (as well as in the history books), it’s thought that the Moulin des Prés was also known informally as Moulin de la Béquille. Other sources suggest that there were actually two windmills where Villa Léandre, home to one of the best secret village vibes in Paris, can now be found.

Whatever the case, the windmill fell out of disuse by the 19th-century and was eventually demolished by the early 20th-century to make way for the art-deco houses of Villa Leandre. The street is named for a local comedian, Charles Léandre, while the villas are English inspired.

Each of the houses along this street are different in decor and appearance; art-deco in style, they’re a true break away from the Haussmannian architecture that’s so synonymous with the rest of the city. Prior to 1936, the road was known as Villa Junot. 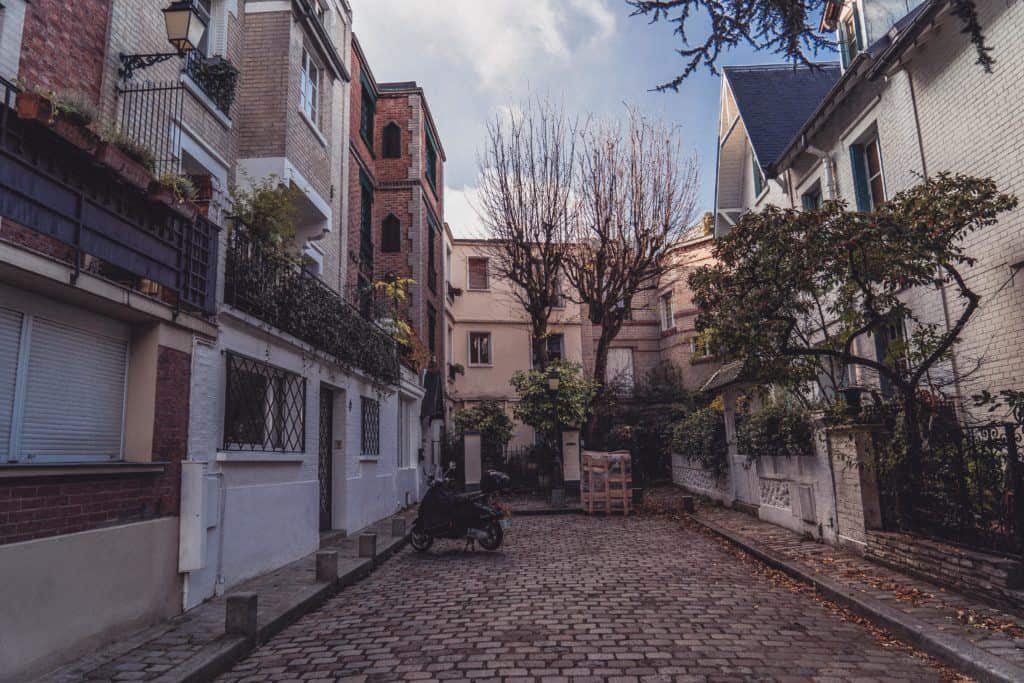 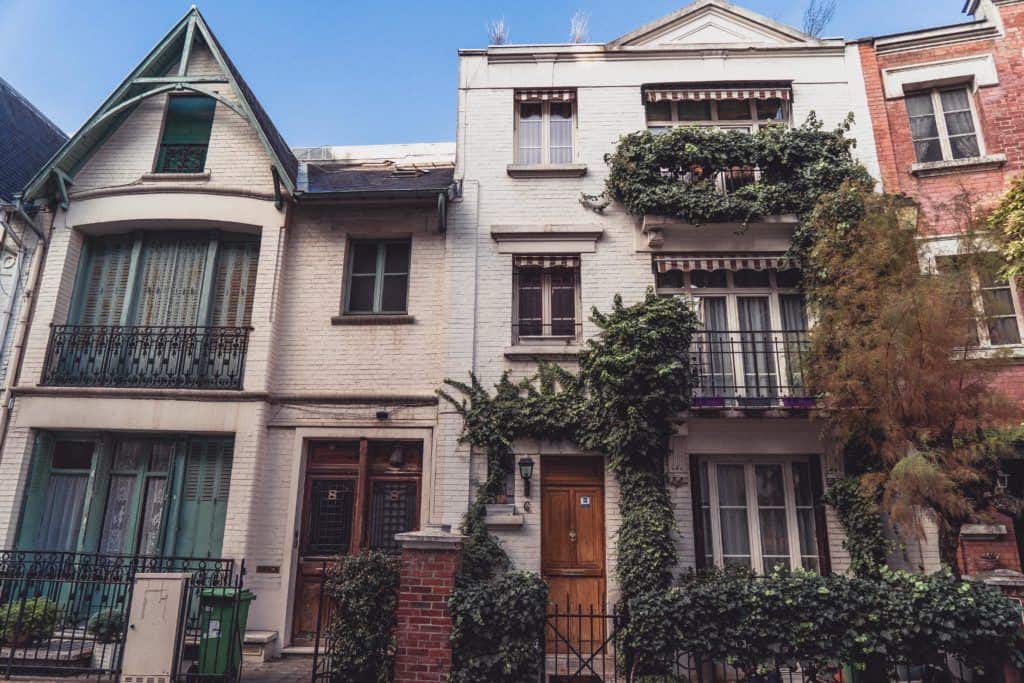 One particular house of interest is that of No.15. Constructed for the French-Romanian poet, Tristan Tzara, in 1926. For those with a sense of humour, No. 10 is certainly worth checking out; it’s here where you’ll find a mini ‘Downing Street’ Plaque (an ode to the Prime Minister’s Office, 10 Downing Street in London!)

Today, each house comes equipped with its own little garden and is reported to be among some of the most expensive real estate in the city. So although I enjoy wandering along this English-inspired street, it doesn’t seem like  I’ll be snapping up a property in the neighbourhood anytime soon! 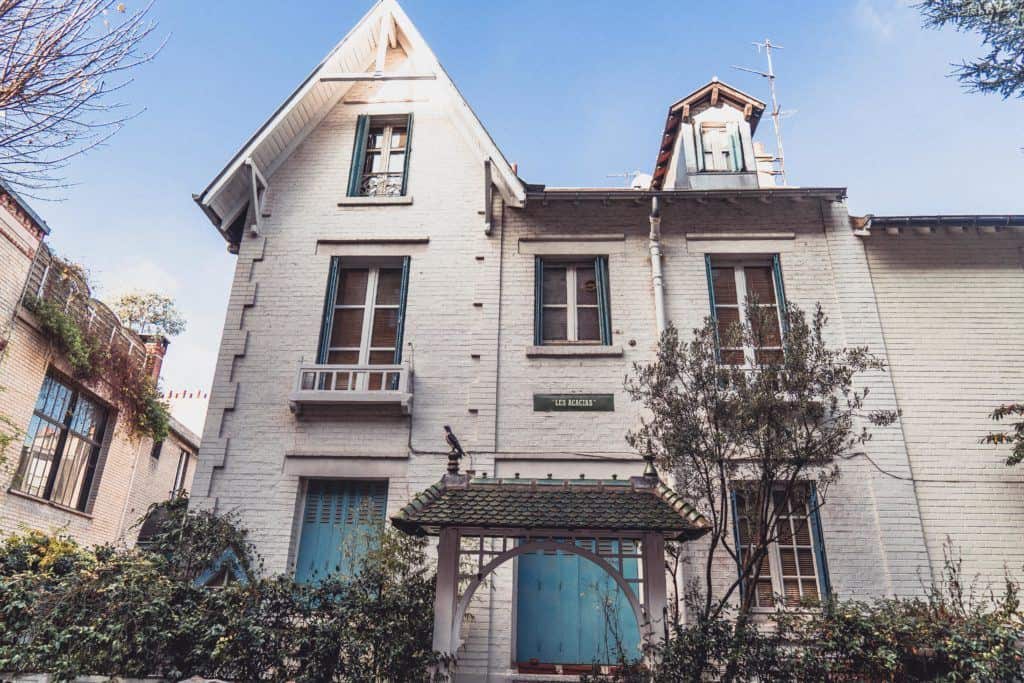 Thanks to its prime location between the Sacré Coeur Basilica and the Cemetery of Montmartre, there’s no shortage of quirky and unusual things to see and do close to Villa Leandre. If you give yourself enough time to truly explore the 18th arrondissement, then also be sure to take this free and self-guided walking tour.

Otherwise, you should know before you go that Montmartre has plenty of things to do, including off the beaten path attractions and many hidden gems. If you’re looking to explore the district in further depth, then there are plenty of wonderful Montmartre hotels at every price point. Finally, for a completely new perspective on the 18th arrondissement, booking a Romantic Paris Vintage Citroën 2CV Tour like this one is a great way to explore the district!

One of the most unusual cemeteries in the city is that of the 18th arrondissement. While some tombs lie- quite literally- underneath a particularly modern road, famous people interred here include singer Dalida and Émile Zola.

If you’ve ever seen a photo of a pretty street in Montmartre (cobbled, trailing ivy, La Maison Rose at the other end), then Place Dalida is where it was shot! Head there early in the morning to make the most of the pretty light and experience this magical place without the crowds. 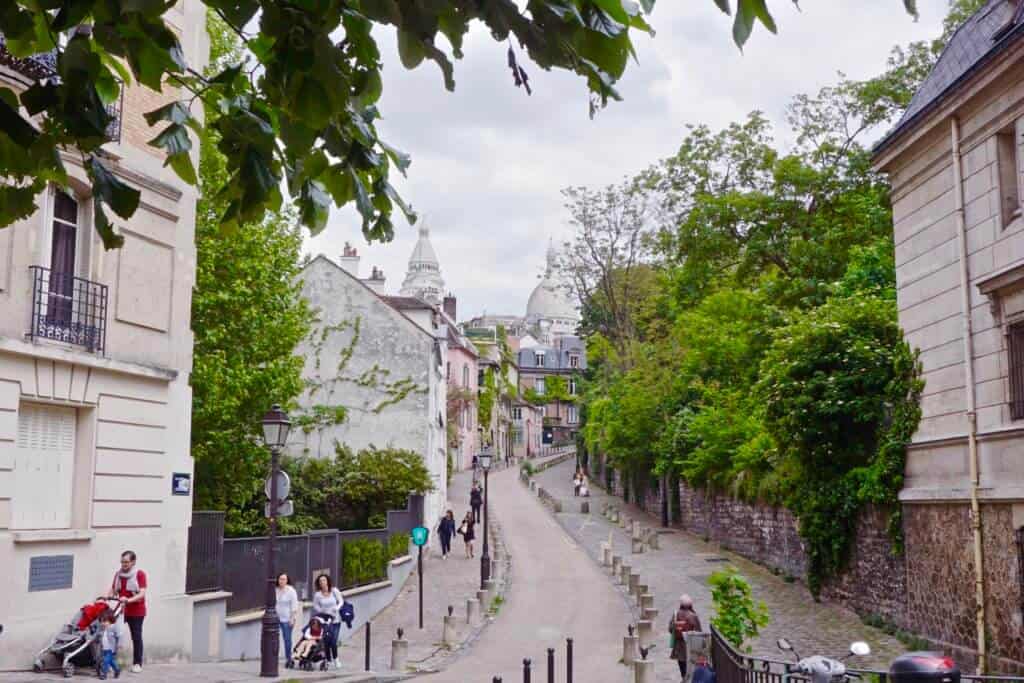 Located in an often overlooked church, just streets away from the Sacré Coeur, the Calvary of Montmartre is open to the public on just one day a year (the 1st of November) so choose the timing of your visit carefully! For more information, check out this guide to the Cimetière du Calvaire.

Though not quite as much of a secret as it was just a few years ago, the Montmartre vineyard is pretty and unique. Though only open to the public during the wine harvest, the vines can still be admired through the iron gates! Nearby, the Lapin Agile is a particularly famous cabaret. 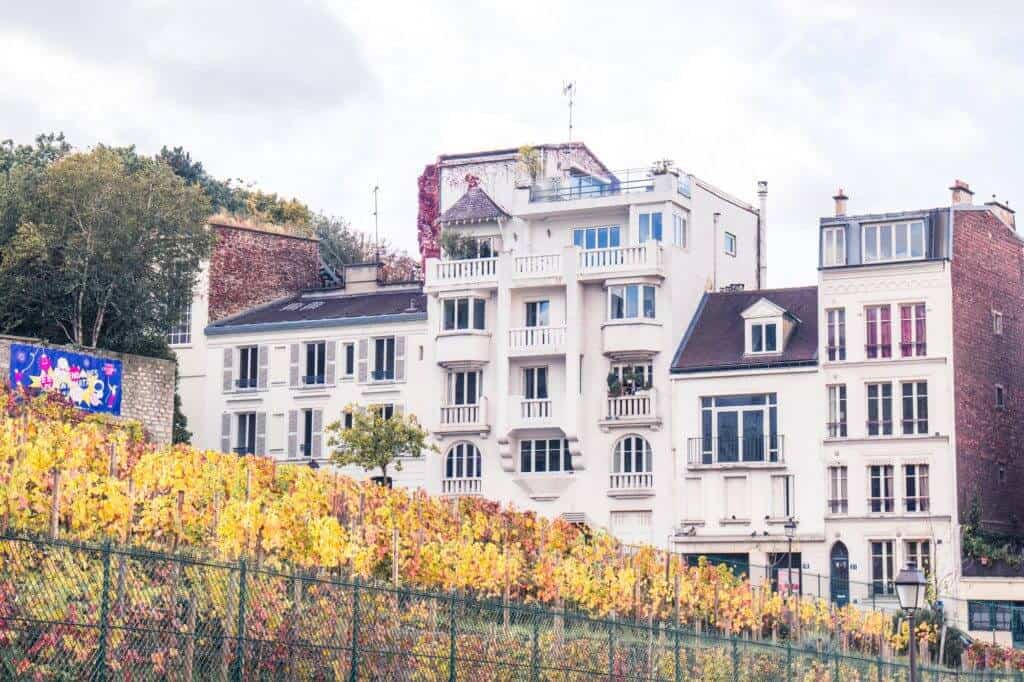