Of all the bridges in Paris (and there are technically over 30), Pont des Arts is easily one of the most famous of them all thanks to its central location and former status as the ‘love lock bridge’. Spanning a stretch of the Seine between the Louvre Museum and the Institut de France, here’s a history of Pont des Arts, as well as how to visit, and things to know before you go. 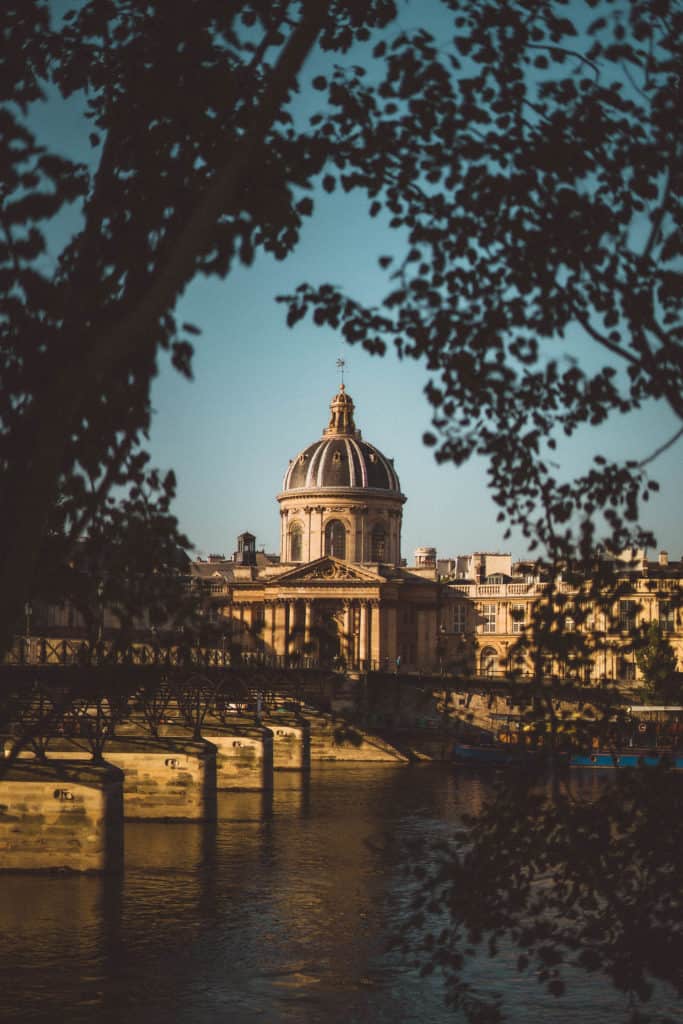 A history of Pont des Arts

The history of Pont des Arts dates all the way back to 1801 when a nine-arch bridge was constructed so as to serve as a pedestrian walkway over the River Seine. Works finished in 1804, making the pedestrian crossing the oldest and first iron bridge in Paris.

However, that isn’t to say that the bridge hasn’t been renovated, restored, and repaired rather significantly over the years. In 1975, the bridge was recognised as a National Historic Monument. However, just one year later, in 1976, an inspector from the Bridges and Causeways department noted that the bridge was in poor repair.

Pont des Arts had suffered from several aerial bombardments during the Second World War. By 1977 the bridge was deemed too dangerous and was closed to the public. Further damage was suffered in 1979 when a barge rammed into the bridge, causing a partial collapse of over 60 metres. 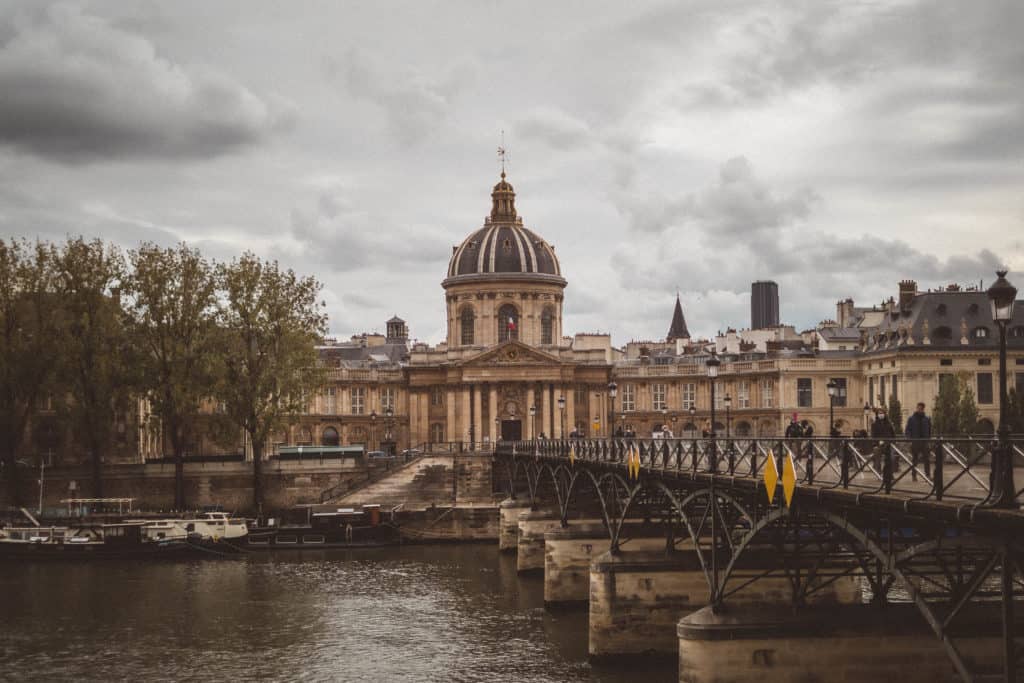 Eventually, the decision was taken to tear down the Pont des Arts completely and instead replace it with an identical one. The reconstruction of Pont des Arts took place between 1981 and 1984 under the watchful eye of Louis Arretche.

Though the new bridge was supposed to be identical to the one it was replacing, Arretche took the decision to reduce the number of arches in the bridge from nine to seven, i.e. the seven you see today.

Over the past few decades, many outdoor art exhibitions have been hosted on the bridge. Most recently, Pont des Arts featured as a filming location for ‘Emily in Paris’. The bridge is so iconic that it has also appeared in Sex and the City, Now You See Me, and there’s even a French drama film that was released in 2004 and was called ‘Le Pont des Arts’. 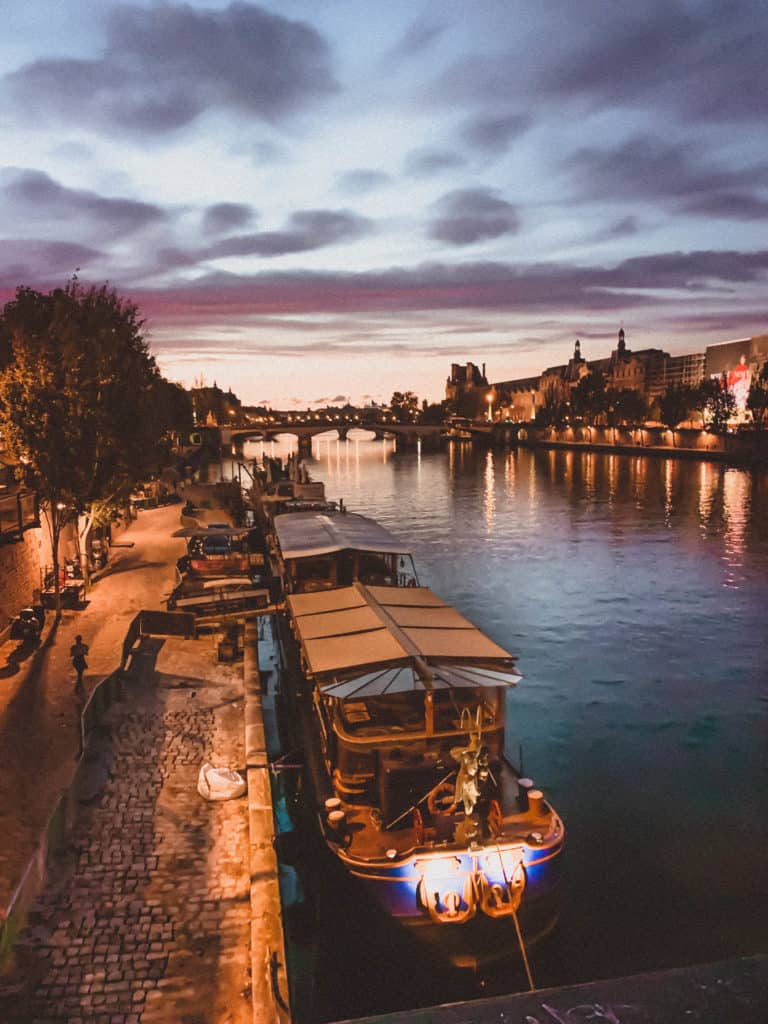 Up until 2015, Pont des Arts was known as one of the primary locations for the ‘love lock tradition‘. The fairly modern tradition saw couples affixing locks to the bridge’s metallic structure, often inscribing their initials into the padlocks in the process.

The couple would then throw the key into the River Seine, thus cementing their love ‘forever’. Obviously this practice was not only horrible for the environment, but it also saw tonnes and tonnes of extra metal added to the bridge. If you see ‘love locks’ being placed onto monuments on your travels, I highly recommend avoiding this practice. 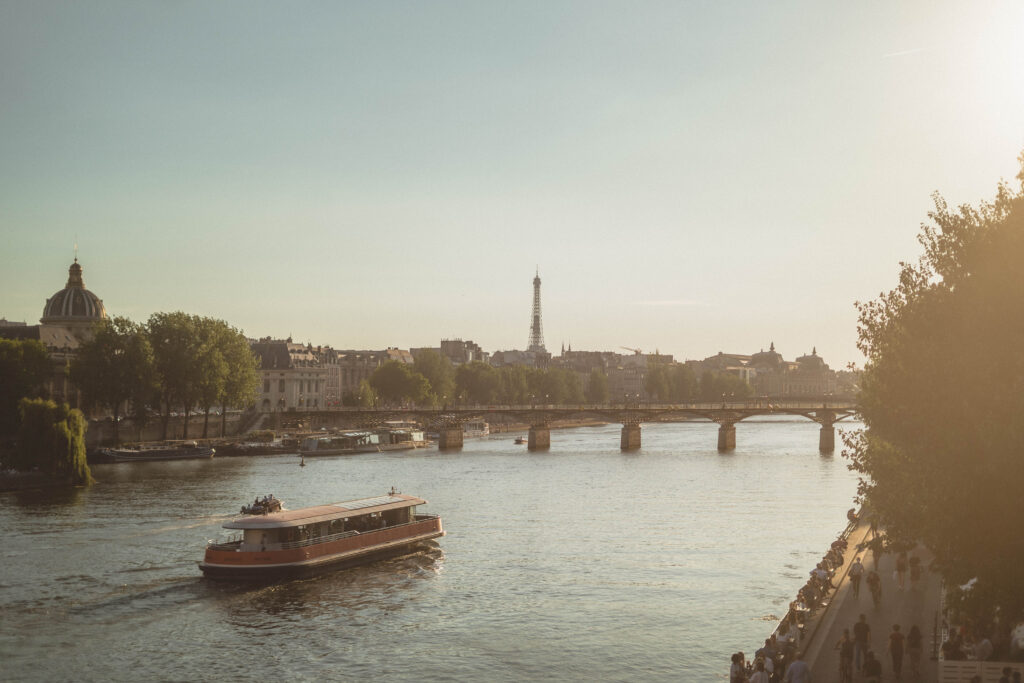 Can you still put locks on Pont des Arts?

No, you can no longer put love locks on Pont des Arts. The weight of the locks became such that it started to endanger the structural integrity of Pont des Arts. And so, in 2015, the locks were removed. Glass panels have since been installed across the metal bridge to make it harder to, but the tradition nevertheless persists in other parts of the city.

How to visit Pont des Arts

The pedestrianised bridge is closed to cars and is open 24 hours a day, seven days a week. As well as being accessed by several steps on either side of the bridge, there is also ramps leading up and down the bridge and thus making it one level.

During the past few months, the bridge has been in pretty poor repair, and there are a number of uneven planks across the length of the structure. Otherwise, you should know that the bridge is home to a number of benches which are the perfect spot to sit and watch the world go by or catch up with friends.

When walking along the bridge, you’ll often see artists setting up their easels to paint Paris ‘en plein air,’ which makes for a charming sight. Pont des Arts offers views of the western tip of Île de la Cité (home to Square du Vert Galant), plenty of Haussmann architecture, and even the Eiffel Tower. As such, Pont des Arts is one of the best places to enjoy sunset in Paris. 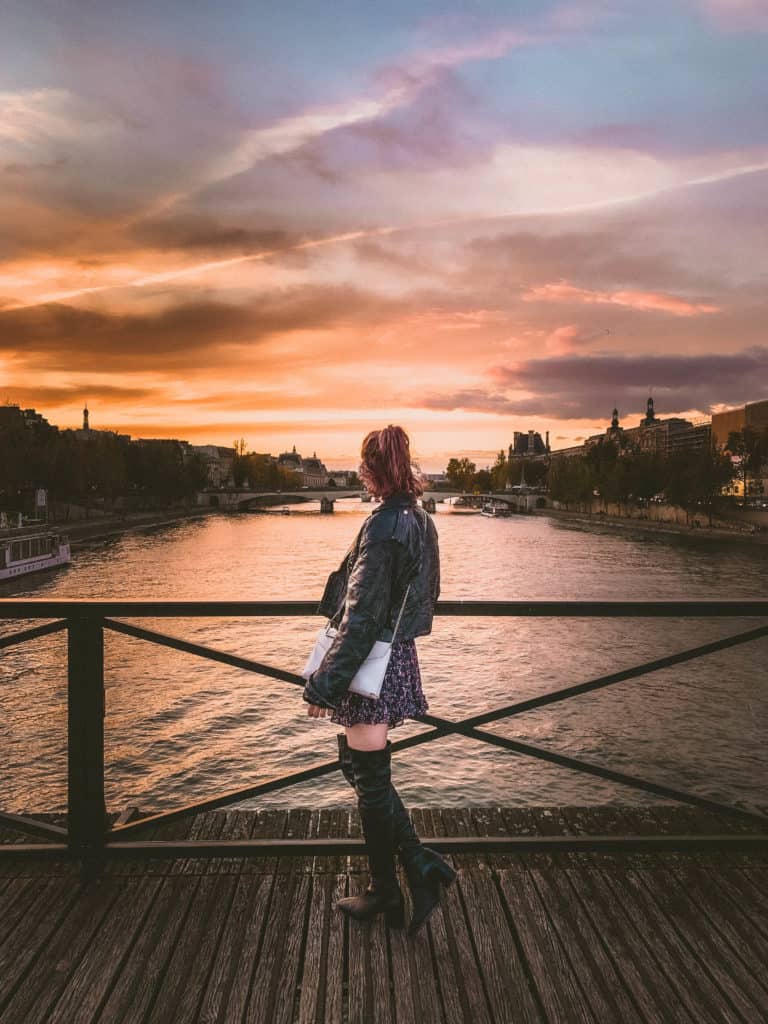 Enjoyed reading this guide to the best of Pont des Arts? Pin this article now, read it again later: 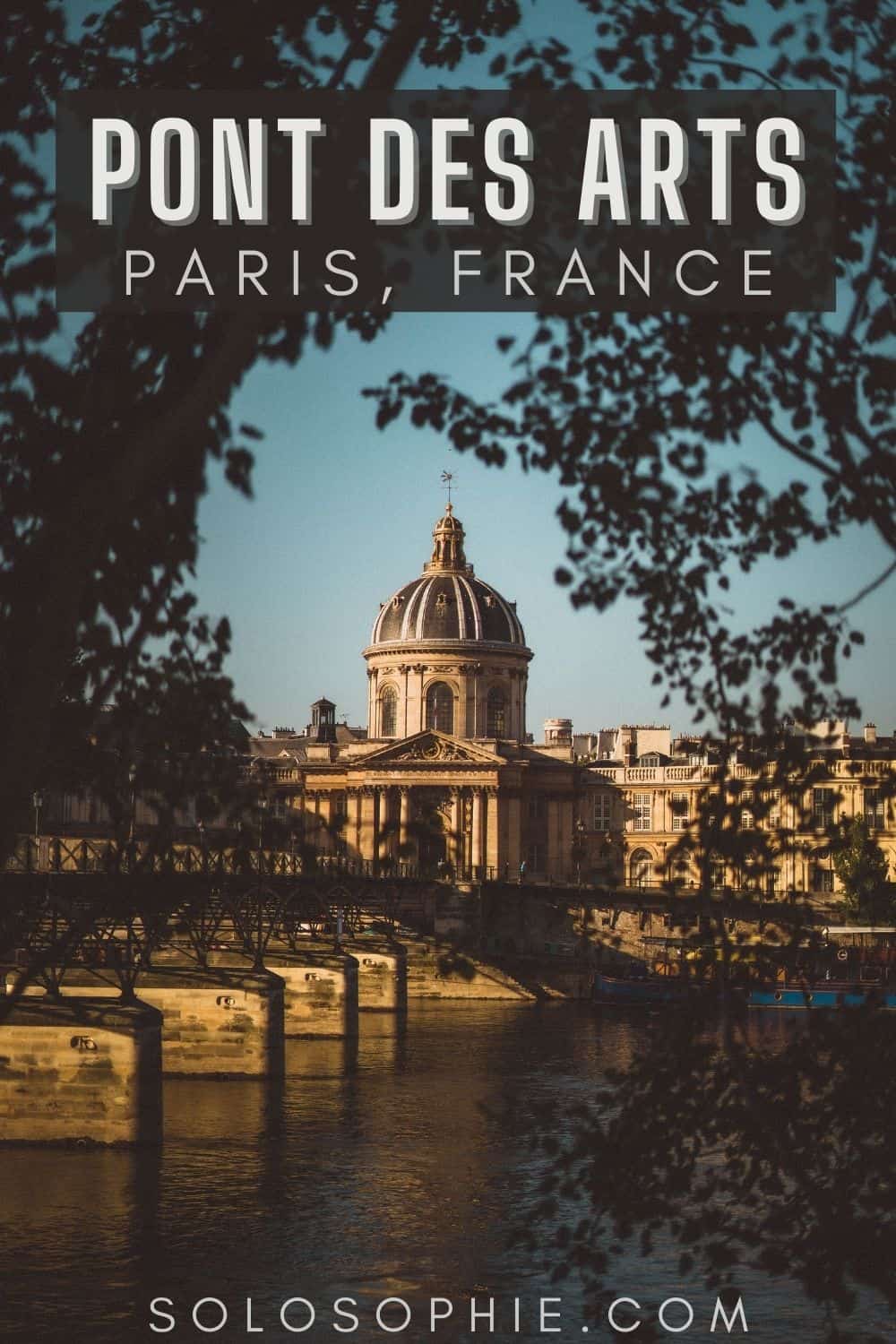 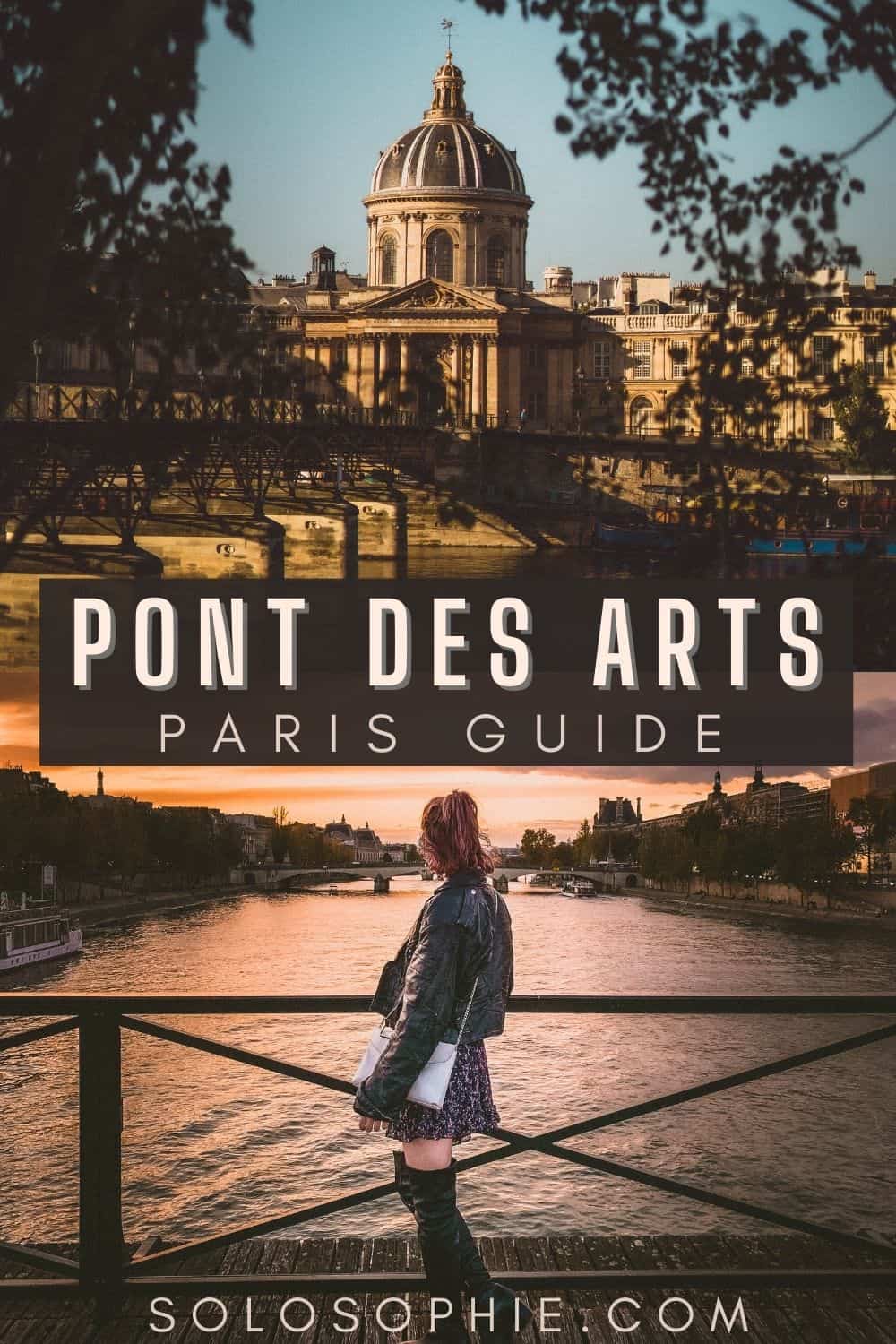 Pagoda Paris, France: An Architectural Gem in the 8e