Is there anything more Parisian to do on a Sunday afternoon than to stroll along the banks of the Seine and peruse the antique and varied wares of the Paris bouquinistes? The classic green boxes are almost as famous as the Seine itself, though the practice of becoming a bookseller is much more elusive than you might have thought!

Due to the abundance of green stalls lining both banks of the Seine, it’s often said that the well-known river “runs between two bookshelves“. So iconic is this scene, that in 1991, the Paris bouquinistes were made a UNESCO world heritage site.

Wandering along the river, it would seem that the Paris bouquinistes have been there forever. Their little green façades weathered with time, their books yellowed with age. Obviously, this isn’t actually the case!

A brief history of the Paris bouquinistes

So when exactly did these shops first appear? Well, the vendors have been selling their wares along the banks of the Seine since at least the mid-1500s. This time frame is within a hundred years of the oldest house still standing in Paris.

Although no one is quite sure where the term ‘bouquiniste’ comes from, it’s widely believed to have derived from the German ‘buch’ (book) or the Dutch ‘boeckin‘ (small book).

Although in operation since the 16th-century, the booksellers weren’t regulated until 1891, when they were officially recognised by the City of Paris. What’s more is that the green colour wasn’t actually mandatory until 1900!

Today, there are over 900 green boxes and 240 vendors selling an estimated 900,000 books. Bouquinistes have also been implemented in other French cities such as Lyon. Sound like your kind of job? Well, if you want to become a Paris bouquiniste vendor, then you’ll have a while to wait. The waiting list in eight years long!

Of course, you can’t just turn up, install a stall along the banks of the Seine and start selling your wares. Because the Bouquinistes are highly regulated, if you want to sell vintage books, posters, and the likes along the banks of the River Seine, then you must be granted a license by the city of Paris to sell wares.

Under these conditions, your Bouquiniste stall must be open at least four days a week. If you’re wondering why all of the boxes are the same shade of green (similar, in fact, to that of the Wallace Fountains), then it’s actually because Bouquiniste boxes must conform to a certain size and standard. They must be painted in the uniform green colour.

Hours vary from stall to stall but can be between 11:30 A.M. and Sunset. Paris is a pretty polluted city (even since the quays of the Seine have been closed to motorised vehicles) and so the boxes need maintenance and repainting every few years. Those in charge of the Bouquiniste box (i.e. the vendor) must pay maintenance cost for the little green boxes.

Last but not least, Bouquiniste vendors have to pay rent of around €100 a year, which goes directly to the city. In order to maintain their ‘authenticity,’ vendors are only allowed to have one box of ‘souvenir’ goods (i.e. Eiffel Tower keyrings and the like). 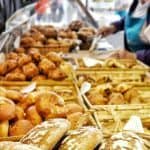 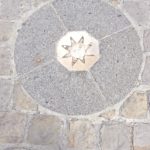 Paris Point Zero in France and Why All Roads Lead to Rome! 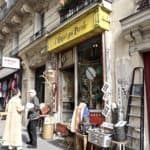 How we spent our 3rd day with 3 children in Paris: Notre Dame, the Orsay Museum, + Shakespeare & Co. - Dadcation

[…] that, we shopped the bouquinistes along the Seine and got ice cream at Berthillon, which some say is the best ice cream in the world, […]

I can't wait for this stroll! YAY!