Notre Dame de Reims Cathedral is a must-visit for fans of the Gothic architectural style. Flying buttresses are to be found in abundance, as are high arches, and several rose windows. So important is this French ecclesiastical building that some twenty-five French kings were crowned in times gone by. Here’s your insider’s guide to Reims Cathedral (Notre-Dame de Reims), including how to visit and a quick history!

If you’re thinking about seeing a lot of attractions and monuments while in Reims, Consider booking the Reims City Pass, which includes a guided tour of Reims Cathedral and access to public transportation. To work out whether or not the pass is worth it for you or not, add up the cost of the individual attractions you wish to visit and see if you’ll save money. Find more details here.

If you visit just one monument in Reims, make it the High Gothic Cathedral. In French, the cathedral is known as Cathédrale Notre-Dame de Reims. Constructed over eight centuries ago, Reims Cathedral is one of the most important ecclesiastical buildings in France. For more France inspiration, be sure to check out our guide to the best things to do in Reims.

A brief history of Reims Cathedral

There’s been a place of worship on site where the Grand Cathedral now stands since at least the 4th-century CE when the Romans transformed the city of Durocortorum (Reims’ Roman name) into the second largest city in Roman Gaul.

The first church where Reims Cathedral is now located was thought to have been founded at some time in the 5th-century and it is here where founder of the Merovingian Dynasty, Clovis I, was baptised.

The current Reims Cathedral on site was built in the 13th-century, a time at which France wasn’t the unified country as we know it now. Instead, the Capetian King only ruled over the Île de France region and feudal barons and lords controlled the rest of what is modern day France.

The capetian Kings expanded out of the Île de France region into nearby territories and it is for this reason that the High Gothic architecture was able to escape the Parisian region and venture further afield.

Like many places in Eastern France, the city of Reims was heavily bombed, and thus damaged during WWI. The Cathedral sustained heavy bombing and the original glass in the nave was also completely blown apart.

Though the building was badly damaged during WWI, it was duly repaired, in part thanks to generous donations from the Rockefellers. With this being said, the rebuild efforts took decades and some statues remain damaged to this day. Modern artists were invited to come into the cathedral and create new stained glass windows, including Marc Chagall.

Today, Reims Cathedral is a fantastic example of High Gothic architecture that is reminiscent of other ecclesiastical buildings constructed in the same era. Indeed, the High Gothic churches of Reims, Amiens, Rouen, Chartres, and Sens form a circle around Paris, which is of course home to Notre Dame Cathedral.

Reims Cathedral is world famous thanks to the fact that it has the largest number of statues on its front façade of any church in the world. Figures appear to the sides and above each of the doorways. Visitors should note that, once upon a time, the front façade of the cathedral would have been painted in vivid colours.

The front façade is characterised by its three front entrances, which are known as portals. Portals are topped with carvings known as ‘tympanum’. What is unique about Reims Cathedral is that instead of stone carvings, the tympanum is formed of stained glass.

One of the key elements of many Cathedrals in France is the presence of a Rose Window. These circular windows are characterised by their stained glass and are an important way of bringing light into the church. The use of light in churches is particularly important as it’s a way of symbolising heaven on earth in religious symbology.

Located above the Rose window on the front façade of the cathedral at Reims, the Gallery of Kings is a set of carved figures which are meant to represent Kings and rulers from the Old Testament of the bible. According to Christianity, Jesus’ lineage traces back to King David, and this family tree is known as the Tree of Jesse.

What’s unique about the Gallery of Kings at Reims is that Clovis is the central figure displayed in the row of Kings. Clovis was the first ruler of the Merovingian dynasty and was baptised in the church in the 5th-century by Saint Remigius.

One of the most impressive feats of architecture of the High Gothic, which in turn stemmed from the Romanesque, was the ability to create stone roofing. One such example in Reims Cathedral is the Groin Vault. A groin vault is two barrel vaults which intersect and is beneficial as it allows the weight of the stone to rest on two points, making the space more open.

Look closely enough and you’ll soon discover that Reims cathedral harbours a few hidden gems of its own. One such example is the Champagne window. The intricate piece was created in the mid-twentieth century, displays various aspects of Champagne creation, and is created after the style of Medieval stained glass windows.

How to visit Reims Cathedral

The Cathedral of Reims is easily one of the most beautiful cathedrals in France. A visit costs €8 for an adult entry ticket, though concessions cost less. Open every day of the week, the ecclesiastical building is typically open between 7:30 AM and 7:30 PM.

In order to enjoy everything that the building has to offer, I recommend setting aside at least a couple of hours. If you’re looking for somewhere to go after to enjoy a coffee and light bite to eat, I highly recommend heading to the Café du Palais, which is a beautiful café that’s decorated in the most unusual of artworks.

Enjoyed reading about the best of Reims Cathedral? Pin this article now, read it again later: 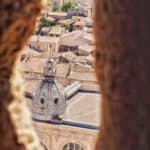 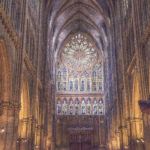 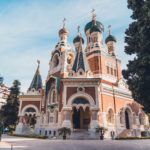 A Visit to the Russian Orthodox Cathedral in Nice
Click here to cancel reply.