Sparkling turquoise water matched with lines of cobalt blue umbrellas. The sun was shining brightly overhead. I could feel warm golden sand between my toes (and, inevitably, taste it in my sandwich). Was I along the Mediterranean coastline? Or perhaps exploring the rugged coastline in Brittany? No! In fact, I was enjoying the Paris Plages in the very heart of central Paris… Here’s everything you wanted to know about the French capital’s pop-up summer beaches! 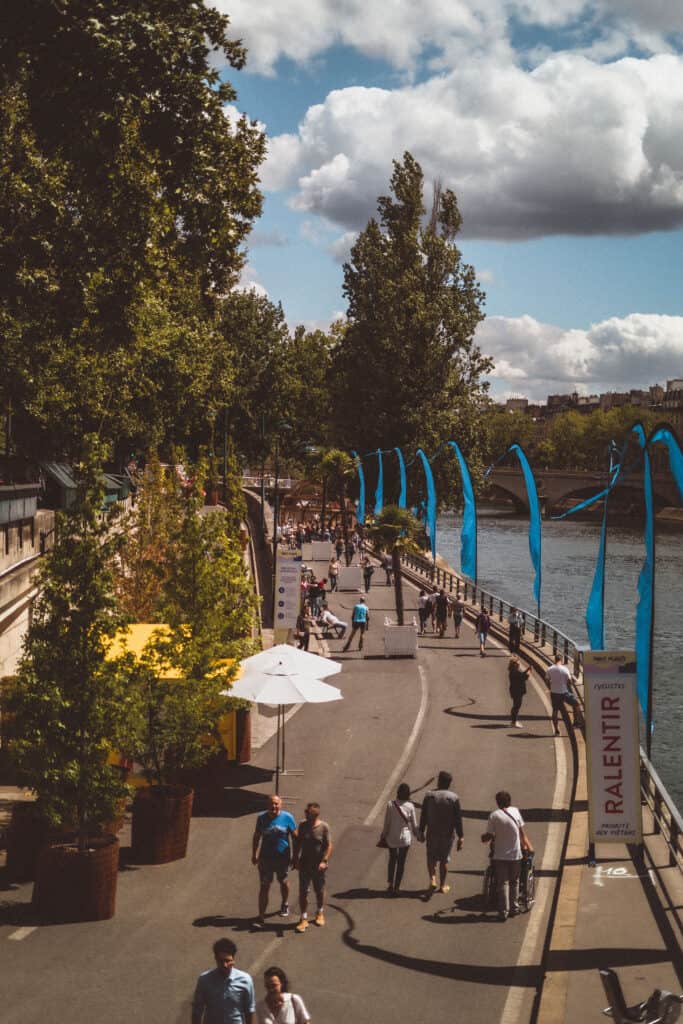 Granted, I might not go for a swim in the water and maybe the River only looked clear because of sun glare. But there’s still a beach in Paris! And while it may not be right next to Notre Dame Cathedral, it’s still within a few hundred metres!

Paris Plages is in operation each summer during the months of July and August in several locations across the city and is a must-visit if you’re looking for a vacation vibe in the heart of Paris, especially considering that this is one of the best free summer activities in the city. 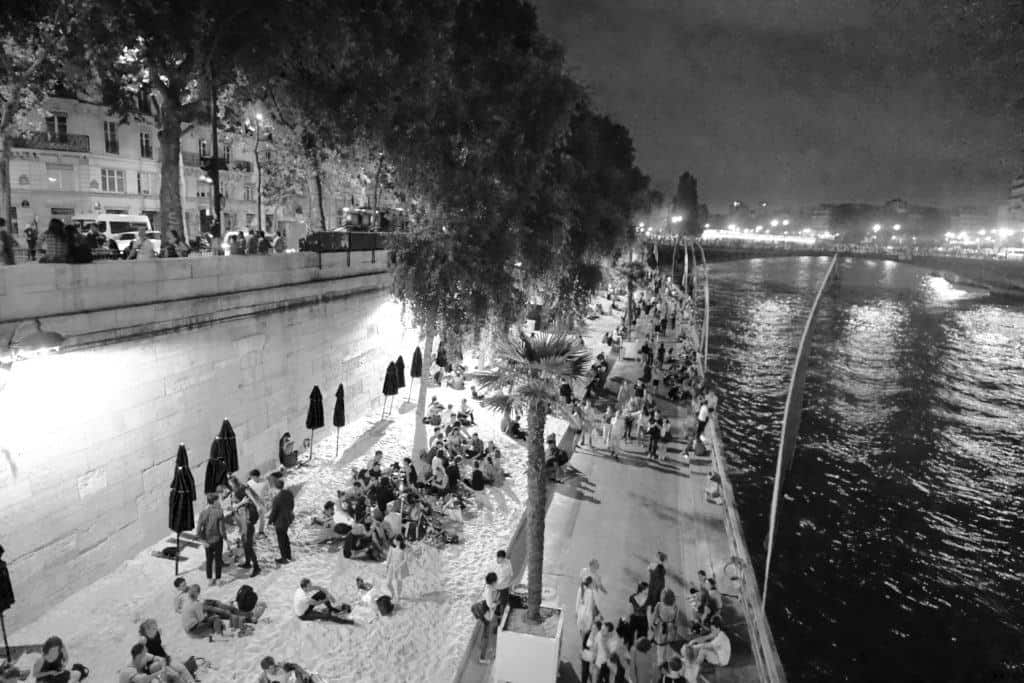 A brief history of the Beaches in Paris

Traditionally during the summer months, as tourists descend on the city of lights, many locals leave. Lots of shops and businesses close shop for the month of August, including many of the more popular Parisian cafés and boutiques. Inevitably, considering that Paris doesn’t just stop during the summer, many locals do still remain in the city.

The Paris Plages (literally translated into English as the ‘Paris Beaches’) were commissioned in 2002 by the then-mayor of the city as an initiative for city dwellers unable to reach the seaside. In a way, the artificial beaches were set up so as to ‘bring the beach’ to the French capital. At this time, the project was known as Paris-Plage, owing to the fact that there was just one beach in operation!

Though the original edition of Paris Plages was just that on the right bank of the River close to Notre Dame, in 2006 the left bank of the Seine was also transformed into a beach. In 2007, the location at Parc de Villette, a waterway that feeds into Canal Saint-Martin was added.

In a somewhat scandalous turn of events, the copyrighted name ‘Paris-Plages’ was used in tourism marketing by the town ‘Le Touquet-Paris-Plage’, leading to a lawsuit in 2006. However, considering that the French settlement had been using its name since 1912, the case was dropped by 2008. 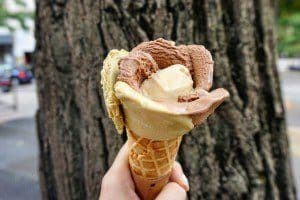 These makeshift spaces have proven to be so popular that they now boast over 4 million annual visitors. There are now five locations of the Paris Plages, all dotted across Paris; the esplanade of City Hall, in the Parc Rives de Seine, on the Quai de Loire, on Quai de Seine, and of course, at the Bassin de la Villette.

In the past, many of the roads (or, should I say ‘quays’) running along the right bank of the Seine were closed off to cars to make way for makeshift beaches. Nowadays, there’s a ban of cars alongside the Seine and so this area of the city is pedestrian friendly all year ’round. During Paris Plages, there are also a number of other events organised by the city of Paris; these include concerts and festivals. Check out this guide for the best of Paris in July. 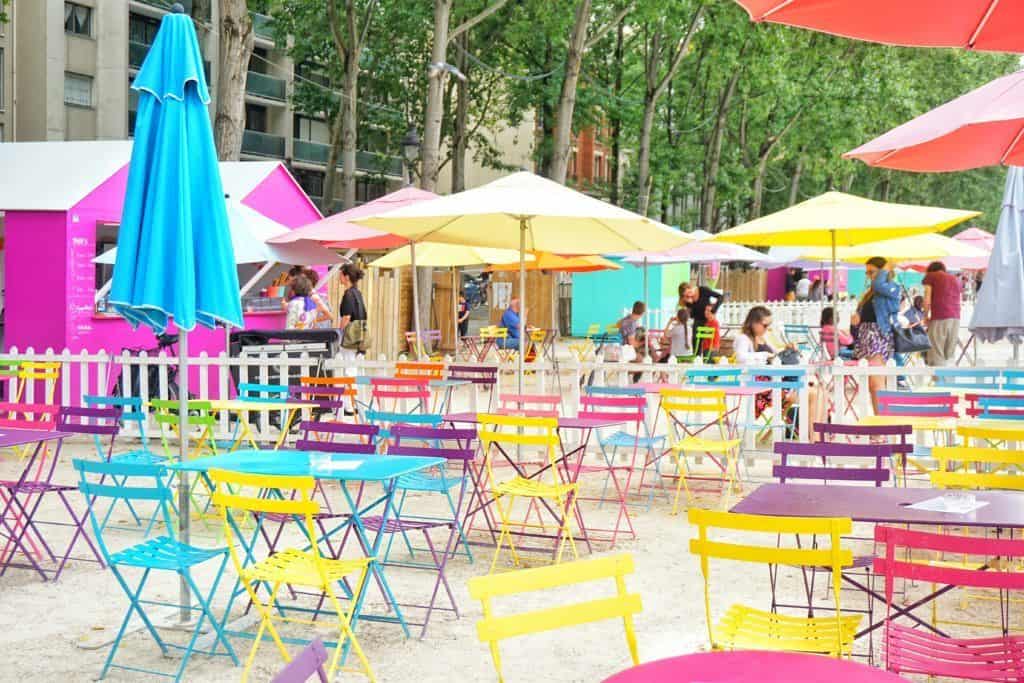 How to visit the Paris Plages

The beaches and spaces are free to visit. Visit any time during the day and you’ll soon spy happy couples walking past holding hands and small children ran around, clutching onto fast-melting ice cream cones. During the evenings, the quay along which the Plage can be found is filled with people soaking up the warm summer nights and relaxing with friends.

Before you go for the first time, you should also know that there are also a couple of rules to abide by that don’t apply to other beaches in France. For example, no topless sunbathing in allowed. For obvious reasons (i.e. safety), no swimming or bathing in the River Seine is allowed.

Each beach and location has a completely different vibe. For example, while the original right-bank beach is the most popular and traditional (i.e. the sandy pop-up stretch between Pont Neuf and Pont de Sully), boating and other water sports activities are available at the Parc de Villette location. Quai de la Loire at Parc de Villette also offers 3 free open-air swimming pools to enjoy.

As a final pointer, when you do decide to visit the Paris Plages, make sure you get to the sandy beach early in the morning as the best spots tend to fill up pretty quickly! After all, they’re free to visit and enjoy!

In 2020, Paris Plages will take place from the 18th July to the end of August. In 2019, the Paris Plages took placed between the 6th of July 2019 and the 1st of September- and signalled a time when the beach, quite literally, ‘came to Paris.’ 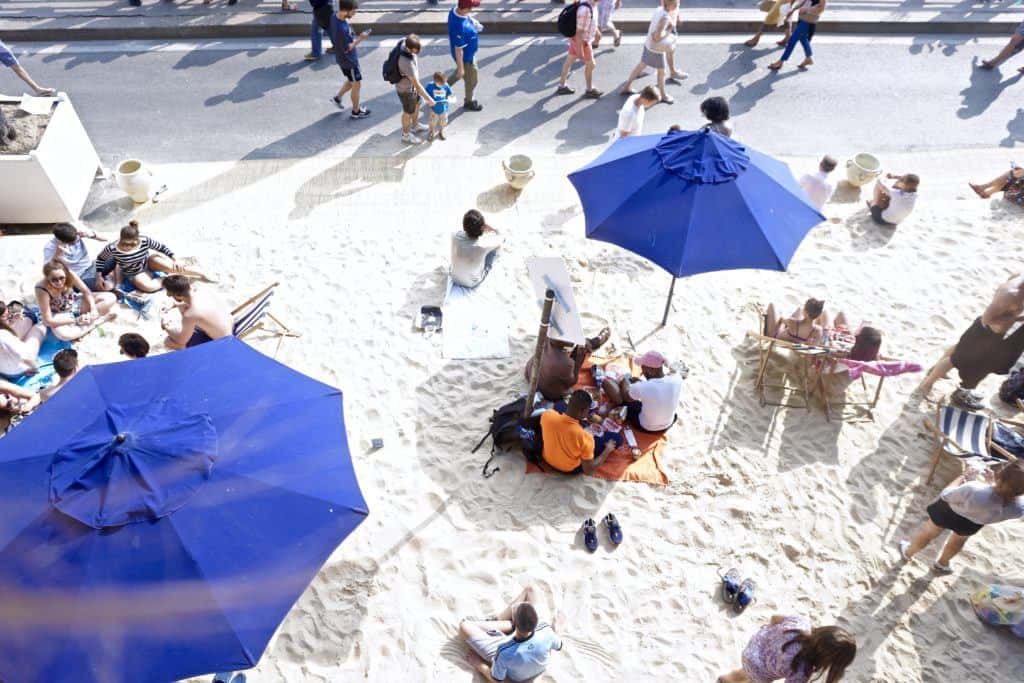 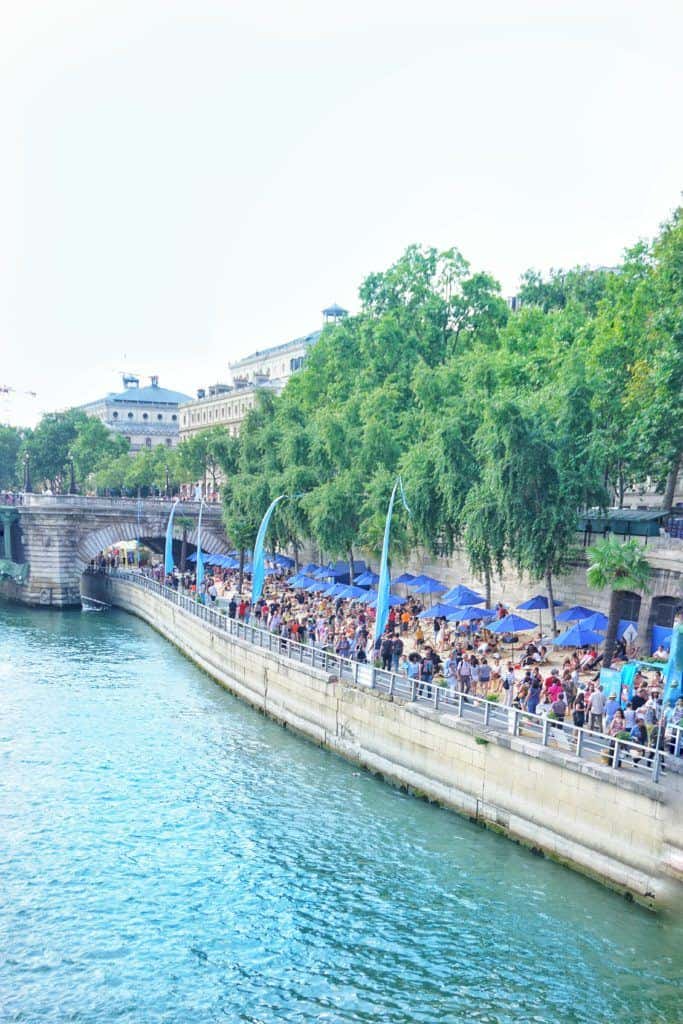 Enjoyed reading about how to visit the Paris Plages? Pin it now, read it again later: what a cool place! thanks for sharing!!