Notting Hill is one of those movies you find yourself watching over and over again. A quintessentially British rom-com, any viewing of this film can’t help but make you feel a little better… And perhaps one of the best parts about Notting Hill is that much of it was filmed in central London, meaning that you can visit many of the iconic locations shown in the movie! Here’s a guide to all of the best Notting Hill Filming Locations…

In the opening scenes, Hugh Grant’s character, William Thacker walks through the Portobello Road Market. This world-famous market is not only worth a visit because it’s one of the most iconic Notting Hill Filming Locations, but because the market itself is simply beautiful and full of quirky antiques just waiting to be discovered.

Once known as the ‘Coronet Theatre’, this is where Will watches the sci-fi movie starring Anna Scott (Julia Roberts). The Print Room itself has a long, varied history, and its use has changed numerous times since its construction. Once a theatre which welcomed King Edward VII, it was then transformed into a cinema in the 1950s.

For the following decades, it was where locals would head to for watching the latest movie. In 2010, it was transformed once again back into a theatre. The Theatre’s goal is to showcase lesser known older works and newer upcoming authors.

The lovely little bookstore owned by Will in the films is located at 142 Portobello Road. At the time of filming, it was an antique shop. Today, the address is home to a shoe shop. It’s said that a nearby bookshop by the name of ‘The Travel Bookshop’ based at 13-15 Blenheim Close was the inspiration for the film’s store. Sadly, The Travel Bookshop has now closed down due to rising rental costs in the area.

This is one of the most famous Japanese restaurants in the world and has appeared in countless films, Notting Hill being just one of the many. Parts of Casino, Memoirs of a Geisha, and The Girl From Nagasaki were all filmed here. In Notting Hill. Will and Anna go on a date here. This is the point of the film where Anna stands up to some rude tourists.

This wonderful period house was used as the filming set for the fictional filming set Anna worked on during the film. Today, Henry James’ film set can be visited. It’s curated by English Heritage, and its picturesque location in Hampstead Heath makes a wonderful day trip from London.

Will and Anna break into these private gardens in the middle of the night after drinking a little too much. However, I wouldn’t recommend a little break in of your own as these gardens remain private to this day, accessible only to residents and those ‘in the know’… Or if you visit on certain open days throughout the year when the gardens are open to the public!

This private address served as the home of Bella and Max during the film. Will brings the famous actress Anna to his younger sister’s birthday, held at the house. Today, the house is a private residence, though you can still admire the pretty Georgian exterior in passing.

Sadly you can’t sit down and enjoy a coffee here as there’s no café… and there never was! In the film, 303 is where Will buys an orange juice. There’s not much to see at this location, other than the street name on a plaque on the wall…

Anna’s Hotel in the film, the Ritz is known for its luxurious rooms and world-class dining throughout the world. Today, although you can stay (though a room here is a little on the pricier side of things), you can also walk past the grand exterior and admire the splendour. If you’re looking for a particularly luxurious place to stay in London, then you may well consider booking a stay at the Ritz! Check prices and availability here.

The interior of the private residence with the blue door sadly can’t be visited. However, the beautiful façade can still be admired from the outside. The house was once owned by the famous screenplay writer Richard Curtis.

The blue door of the house became so famous after the filming of Notting Hill, that it was auctioned off at Christie’s, and the profits raised given to charity. However, the lack of blue door confused many visitors to the area looking for Notting Hill filming locations and it was replaced once more. 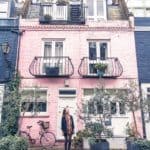 Love Actually Filming Locations In and Around London 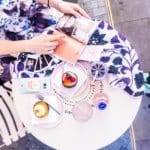 CUTEST CAFÉS IN LONDON YOU WON’T WANT TO MISS! 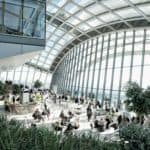 How to Spend a Perfect Sunday in London (as told by a local)
217 shares
Click here to cancel reply.

Great, Sophie. Amazing articles with brilliant pictures. I'm Jacky from Beijing China and hope to make friends with you.

the travel bookshop has closed? sad! I visited the area during my first trip to London:)