Throughout London, there’s a smattering of lanes, alleys and cobbled side streets known collectively as ‘the mews’ of London. Predominantly populating the area surrounding Hyde Park and South Kensington, these small pockets of tranquility are the perfect place to escape the hustle and bustle of city life. One such little street is that of Kynance Mews. Here’s a quick history of Kynance Mews, as well as how to visit and things to know before you go! 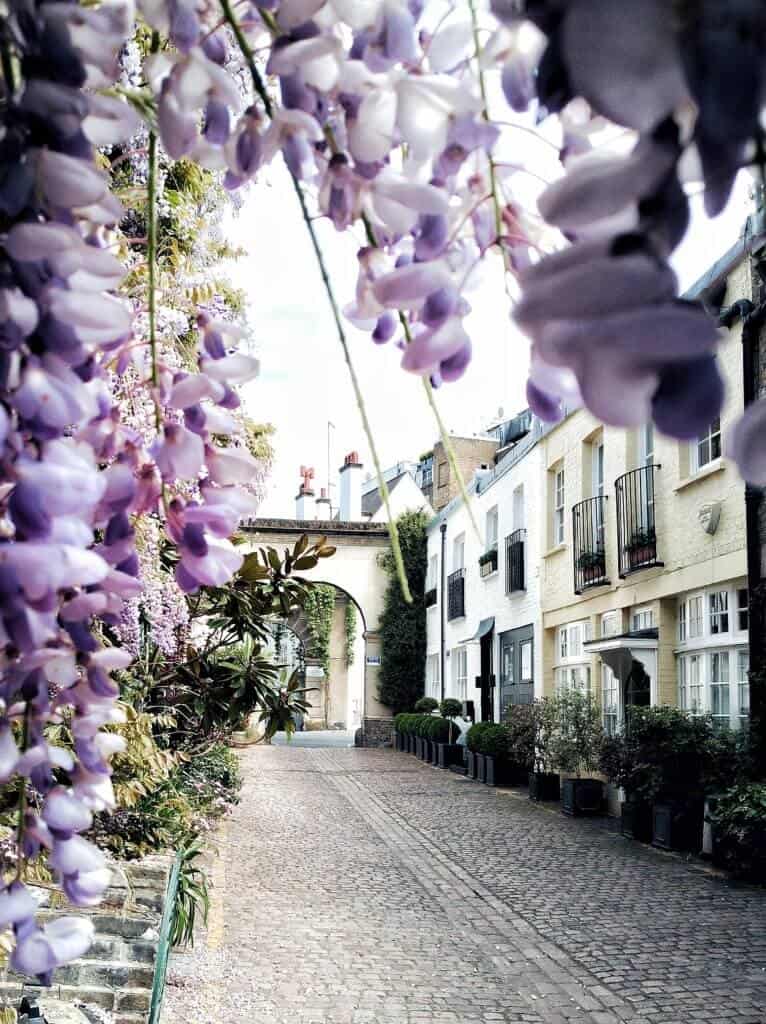 A small stone archway is the only indicator that what lies further down the road is worth a closer look and that you’re heading in the right direction. Further on, trailing wisteria covers the houses, and brightly coloured doors line the street. A vintage feeling pervades the air, and it doesn’t quite feel like you’re still in the heart of London Zone 1.

Instead, you could easily be wandering through a typical English village in the very heart of some rolling green hills, straight out of a vintage movie. There’s a true sense of community here, and locals greet you as if you’re an old friend, rather than a passing stranger.

In reality, you’re meandering through the mews of London, as countless have done before you. Camera in one hand, itchy shutter finger on the other, every new twist and turn present a new photo opportunity. 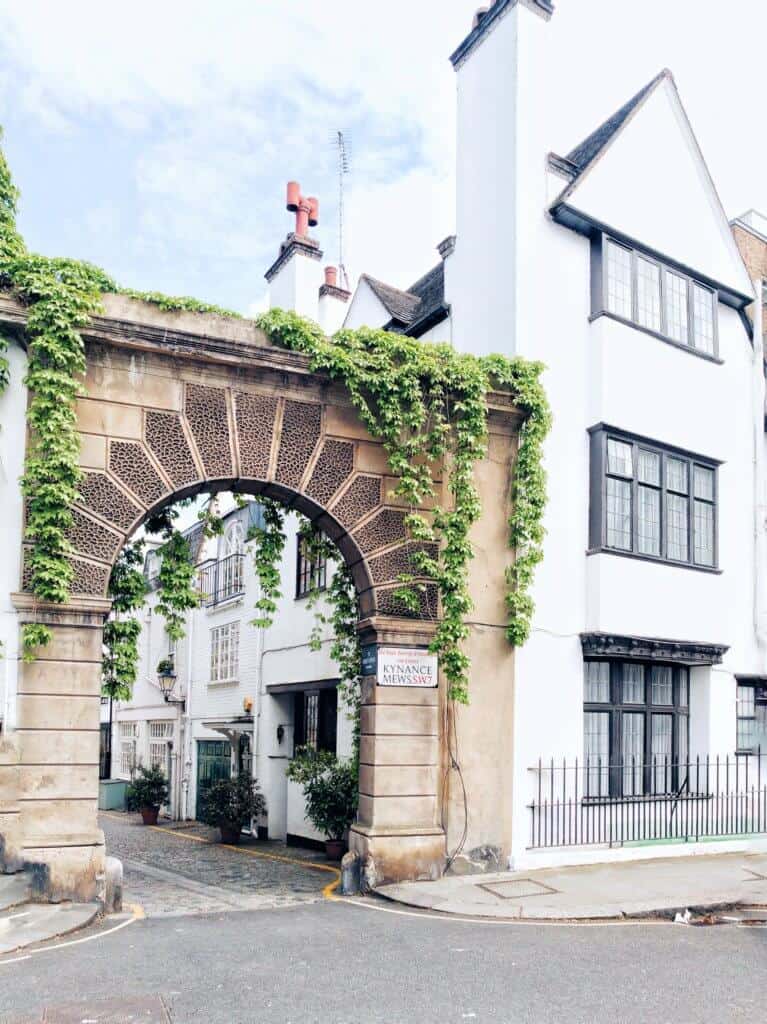 A history of Kynance Mews

Rich in history and full of quirky curios, Kynance Mews was first established in the 19th century. It has remained much the same today as it was when it was first built, a rarity in a place like London, where everything is constantly changing and modernizing.

The Mews even managed to escape the Blitz of WWII unscathed, while much of the surrounding area had to be rebuilt. Here time has stood still for more than a century, a testament to the name ‘mews’. After all, in Old English ‘mews’ is the name given to a set of stables with housing for the horse and accommodation for the horse hands above.

In a somewhat ironic twist of fate, these converted stables have now become some of the most coveted real estate in all of London. What was once a home for the horses of the elite and their staff has become the place to live- with a staggering price tag to match!

From here, you can head to Hyde Park by foot in under ten minutes. Or, if you’re feeling a little more adventurous, then you can carry on wandering down the cute little lane to reach Christ Church. Ignore the dead end sign at the start of the mews, because, near the end of it, you’ll find a tiny and secret set of stairs to reach the small, yet quaint church.

In close proximity to the church is a lavender garden, the perfect picnic spot to settle down with a nice book. Or perhaps just a refuge from the crowds that flock to the area in the summer time. 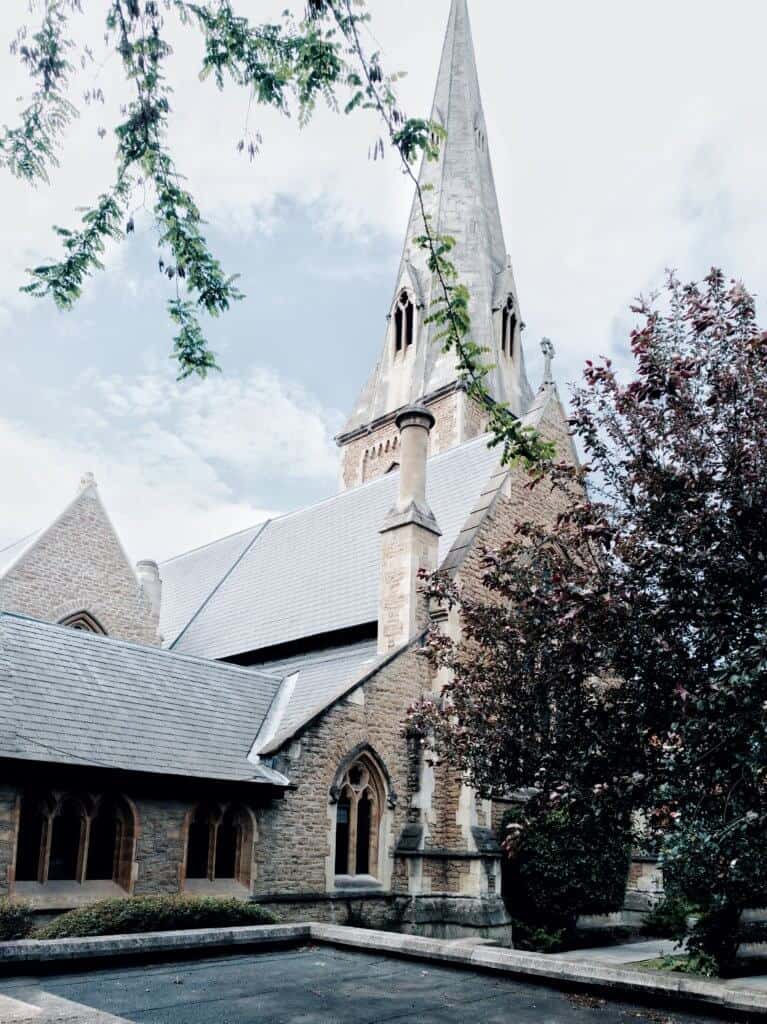 Kynance Mews through the seasons

If you’re visiting London in the late spring, then you’ll be in the lucky position that it will likely be wisteria season in the city during your stay. Wisteria typically blooms in London during late April and early May and can be found on houses roughly halfway along Kynance Mews.

Even if you are not able to get to London during springtime, yet another beautiful time of the year to visit Kynance Mews is during the fall. After all, the autumn foliage along the street is simply magical, with one particular façade being almost completely covered in red and orange trailing vines. 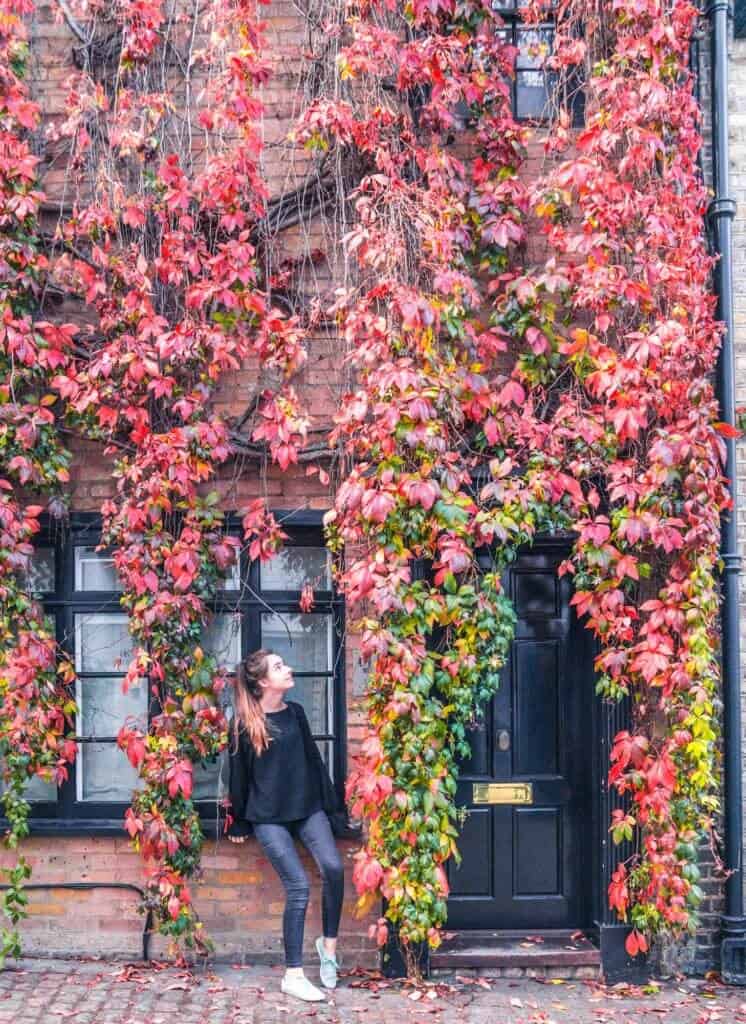 How to visit Kynance Mews

If you’re heading to Kynance Mews, then the closest tube stations are Gloucester Road and South Kensington. I definitely recommend approaching the mews via South Kensington station as you can combine a stroll here with a visit to the nearby Natural History Museum.

From the museum, head West along Cromwell Road and turn right once you reach Gloucester road. Walk a couple of hundred meters up the road and you’ll spot the telling gray archway of Kynance Mews, informing you that you’ve reached your destination… 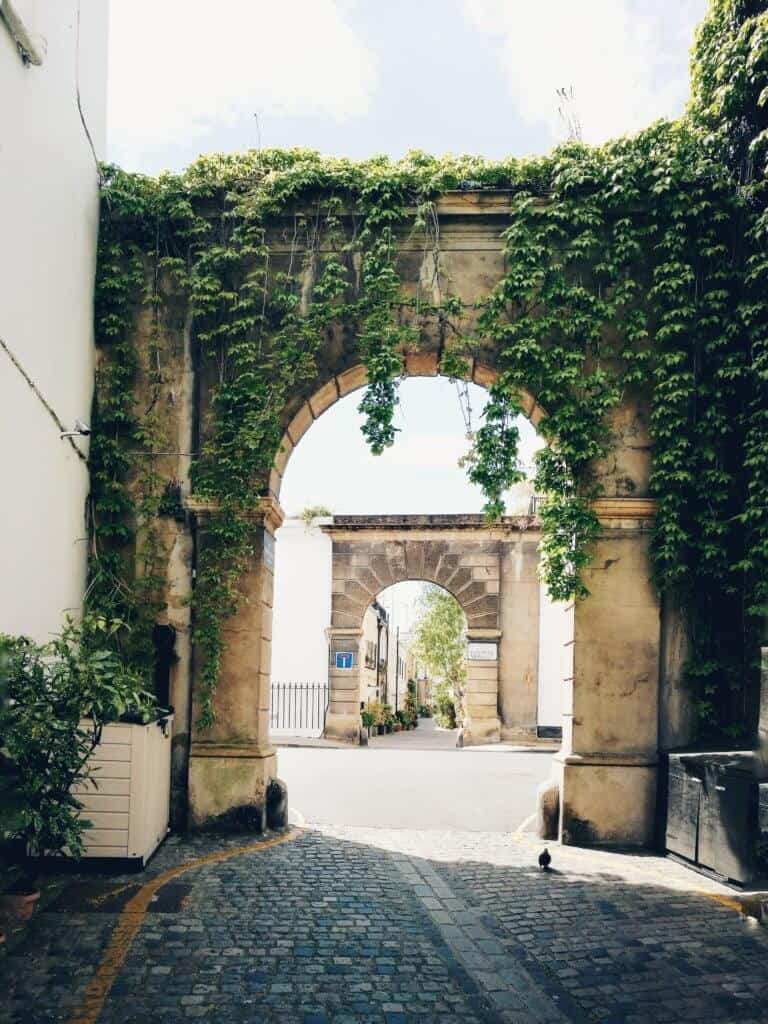