One of the last remaining active volcanos in Europe is situated near Naples, Southern Italy. Its name? Mount Vesuvius. The volcano last erupted in CE 79, tragically taking thousands of lives along with it. The blast and ensuing volcanic eruption covered the once-thriving towns of Herculaneum and Pompeii in tonnes of ash and sulfuric acid. As a result, the ancient towns have been perfectly preserved, offering us a rare glimpse into what it may have been like to live in Ancient Rome. Among the ruins, one particularly interesting find is all of the graffiti from Pompeii…

Pompeii and Herculaneum: Buried under the ash and forgotten for 1500 years.

Until one fateful day, the 24th of August 79 CE, Pompeii was a regular roman city. The city, along with nearby Herculaneum offers a unique snapshot of what life was like almost 2000 years ago.

On that fateful day, Mount Vesuvius erupted, tragically killing thousands of people in the process. There they lay for over a thousand years before being uncovered from the mountains of ash.

In the past few centuries alone, archaeologists have been excavating the remains of these communities and learning about how these peopled lived, loved, and ultimately died.

Graffiti from Pompeii: A glimpse into the past

For as long people have had the materials to do so, they’ve written things on walls. On caves. On rocks. Anywhere and everywhere they can. We want to leave our mark on the world, no matter how small. And the classical city of Pompeii was no different. In total, over 11,000 markings of graffiti have been uncovered in and around Pompeii and Herculaneum.

Before people had Justin Bieber poster to cover their walls, and before they wrote snapshots of their lives on social media, they wrote their favourite epics on the walls instead (Virgil is the most quoted poet in all of the Pompeii writings). They poured their hearts out on simple pieces of concrete. Concrete which was incidentally invented by the Romans.

All manner of writings can be found scrawled on the walls in Latin. From the simple ‘I’m here’ to musings of heartbreak, sex, and even political campaign messages.

There are even Gladiator Game Advertisements and petitions from workers wanting better rights, as well as shopping lists. A whole range of humanity’s thoughts, feelings, and everyday lives are littered throughout the city, breathing life back into the town once more.

Graffiti from Pompeii (and where it was found!)

As you can imagine, there are plenty of scribbles and pieces of grafitti from Pompeii that aren’t so ‘safe for work’ as the ones listed below. If you want to find those too, then they can be found simply by typing in ‘Graffitti from Pompeii’ in your search engine.

In the basilica: “Gaius Pumidius Diphilus was here“. This is the oldest piece of graffiti at Pompeii. Historians believe that this simple piece of writing dates back to October 3rd, 78 BCE. of all the Graffiti from Pompeii, this piece’s simplicity and the human need to leave our mark makes it one of the most memorable scribbles of all.

At a bar: “We two dear men, friends forever, were here. If you want to know our names; they are Gaius and Aulus“.

In the basilica: “Epaphra, you are bald!”

Gladiator barracks: “Antiochus hung out here with his girlfriend Cithera“.

Vico degli Scienziati: “Cruel Lalagus, why do you not love me?” (Love can be so cruel!)

At the Herculaneum Bar: “Handle with care“. (Found next to a drawing of a phallus.)

In the basilica: “A small problem gets larger if you ignore it“. (Very, very wise words, anonymous scribbler!)

In the latrine at the House of the Centenary: “Secundus defecated here” (Written three time on one wall.)

Bar of Astylus and Pardalus: “Lovers are like bees in that they live a honeyed life“.

For more ancient Grafitti, you can search the online database here.

How to visit Pompeii & Herculaneum

For those who are visiting Italy, then a trip to Pompeii is an absolute must and you might also consider taking the time to check out nearby Herculaneum if you have the time. Purchase Pompeii tickets with an audio guide here. So as to learn as much as possible, you’ll want to take a guided tour of Pompeii.

I did this on my visit and found my time in the lost city much more informative as a result. Book your Pompeii Skip-The-Line 2-Hour Private Guided Tour here. Pompeii can easily be visited as a day trip from Sorrento, Naples, and even as far away as Rome (though I recommend staying down South for longer).

Found it interesting to read about the Pompeii graffiti? Pin it now, read it again later:

Please note that the photos used in this post were ones I rescued from a long forgotten private Facebook album on my personal account which I took using my old, old phone back when I was 18/19! A Quick Guide to the Best Things to do in Turin Milan Travel Tips You Need to Know Before Your First Visit 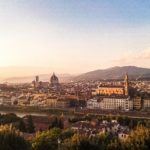 How to Recreate the Florence Experience at Home
347 shares
Click here to cancel reply.

If we talk about pompei then definately we are going to high class historical facts and rich heritage. Nice and informative article.