On the Trail of Art Nouveau in Paris (Architecture Guide)

When you think Paris, you probably think of the classical sandy stoned building style that’s known as Haussmannian. What you may well not know about is that there’s also a fair bit of Art Nouveau in Paris to be discovered too. Here’s your ultimate guide to the best of Art Nouveau architecture in Paris, as well as a history and some of the top buildings you can go and see for yourself… 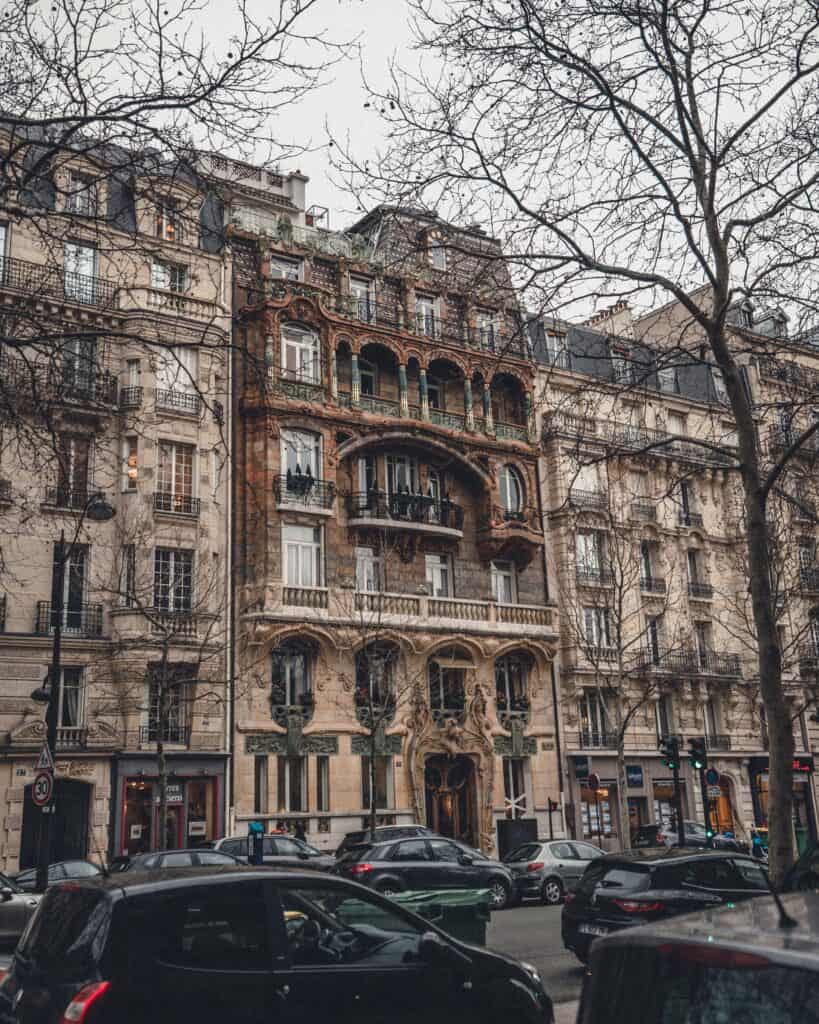 A history of Art Nouveau in Paris

The Art Nouveau movement is characterised by its fluid shapes which draw from natural forms and the movement first rose to prominence at the turn of the 20th-century. The period for Art Nouveau in France is typically considered to be between 1895 to 1914, with the high point of Art Nouveau in Paris reaching its peak with the 1900 Paris International Exposition.

One of the key locations to enjoy the best of Art Nouveau architecture in Paris is in the seventh arrondissement, where you’ll find an array of buildings boasting beautiful late 19th and early 20th century architectural features.

Checking out some of the best Art Nouveau in this part of the French capital is easily one of the best things to do near the Eiffel Tower. The other area of Paris where you’ll find an abundance of Art Nouveau architecture is in the 16th arrondissement, which is right next door to the 7th. Today, there are still over 400 buildings of this architectural movement left in the city. 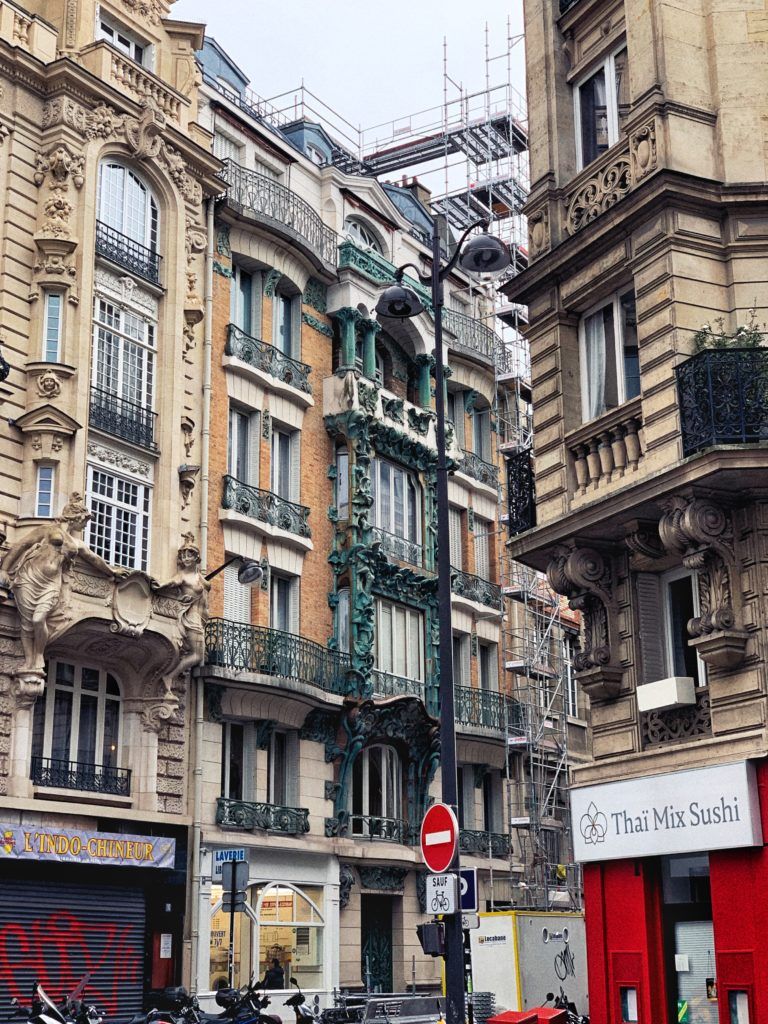 Even if you’re not planning to head to the 7th or 16th arrondissements during your trip to Paris, there is little avoiding the most prominent Art Nouveau feature which can be found all across the city. The classic Art Nouveau métro station entrance was designed by Hector Guimard between 1900 and 1913 and remains almost as synonymous with the city as the Eiffel Tower.

RATP (then known as CFP) was created at the end of the 18th-century to manage the about-to-open Parisian underground trains network. The Paris métro was opened on the 19th July 1900 in time for the Paris Universal Exposition. As part of the forthcoming opening of the Parisian métro, the organisation organised a competition to design the métro station entrances.

Though Hector Guimard did not apply for the competition (21 other applicants did), the other applications were rejected on account of the fact that they selected heavy, costly materials such as stone with which to build the station entrances. Guimard was selected to design the entryways as his designs were created from iron and glass, which were cheaper and faster to put together.

There were a few different designs, the simplest of which designed a simple entryway featuring the words ‘metropolitain’. The more ornate design comprised of a covered rooftop, the likes of which can still be seen at Abbesses métro station today.

Guimard originally wanted to have themed métro stations such as a tomb for the Père Lachaise station and a dancer for the Pigalle station. Unfortunately these designs were never used. In total, there were once 167 Hector Guimard métro station entrances, 66 of which still survive to this day. Rather interestingly, there’s even an Art Nouveau Métro station in the French Canadian city of Montréal. 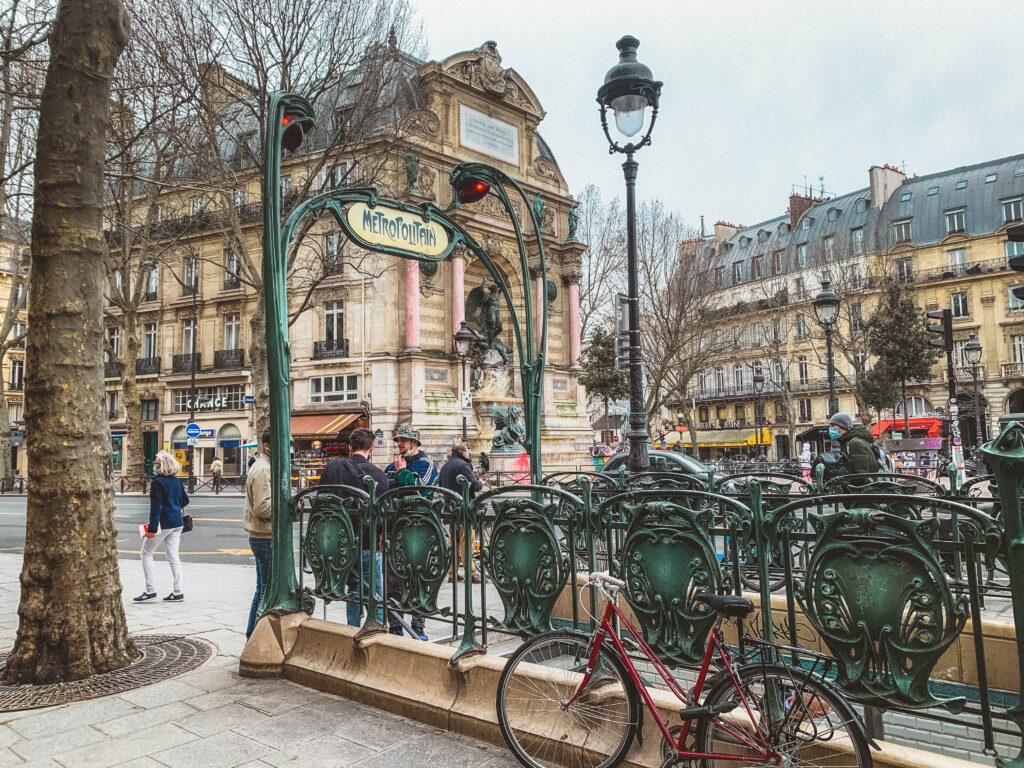 One of the most unusual places to see in Paris is the door (and indeed entirety of the front façade) of the Lavirotte building at 29 Avenue Rapp in the 7th arrondissement of Paris. Many of the forms across No. 29 are meant to invoke a reimagining of Adam and Eve through Lavirotte’s eyes…

For example, in the very centre of the entranceway, you’ll soon spy a depiction of Lavirotte’s wife, with an animal draped across her shoulder. As you might imagine, the doorway was rather controversial when it was first installed, not least because the doorway is alleged by many to resemble an inverted phallic symbol. 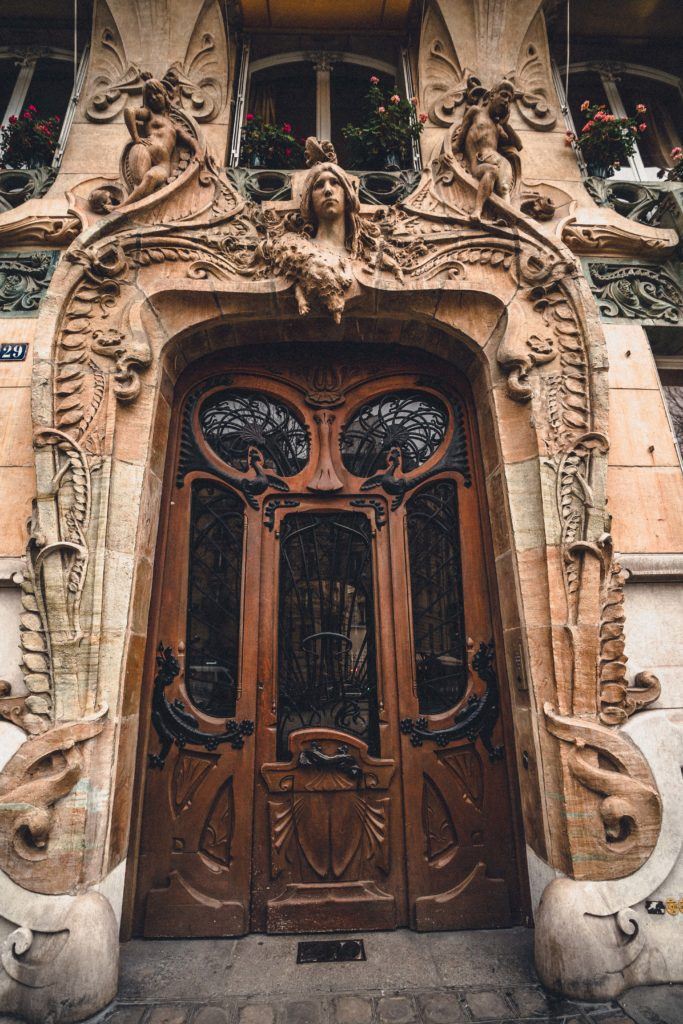 Just around the corner from the Lavirotte Building, there’s a little hidden gem of a Parisian Sqaure which offers up one of the best views of the Eiffel Tower. Square Rapp is named for 18th-century born general, Jean Rapp.

What’s more is that Square Rapp is also home to one of the more charming Art Nouveau buildings in the 7th arrondissement (No. 4 Square Rapp) and features plenty of balconies and railings modelled on natural forms. While number 4 is now the building for the Société théosophique, No. 3 was where eccentric architect Jules Lavirotte once resided in an apartment on the 5th floor. 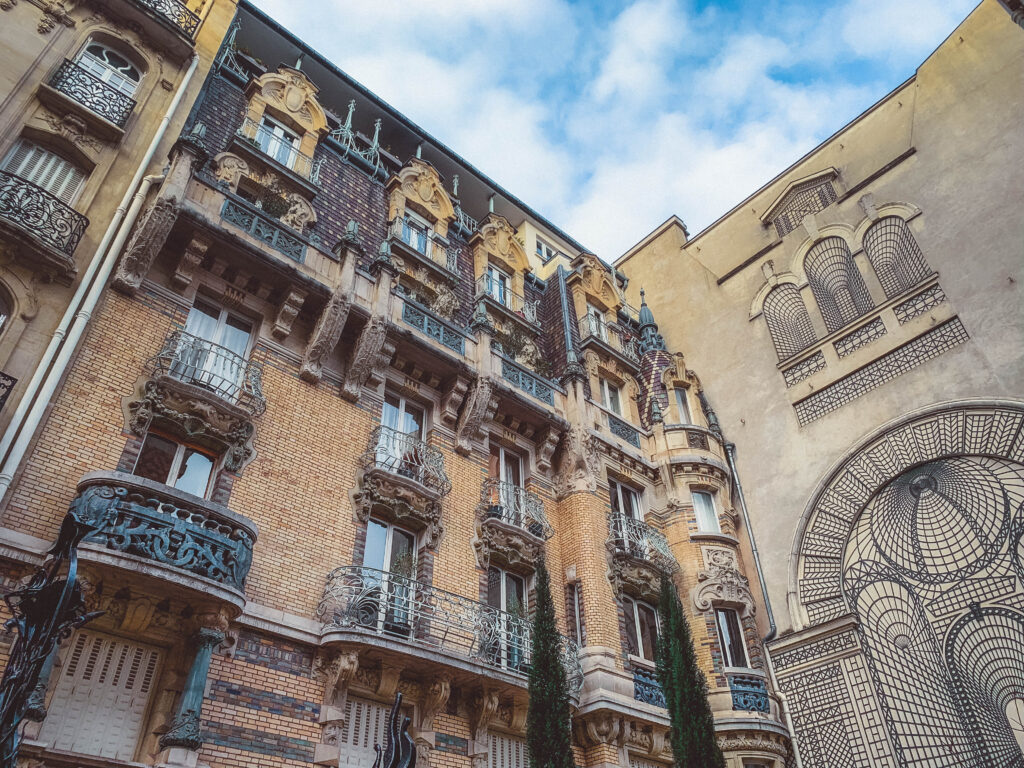 Built at the turn of the 20th-century in the Art Nouveau fashion, No. 14 rue d’Abbeville is easily the most beautiful and fascinating building of the street. Covered in a green nature-focused foliate glazed stoneware that’s applied directly onto the brick façade of the front of the building, you’ll know you’re in the right place when you spot the many floral and animal patterns!

Crane your neck towards the 4th floor, and there are even squirrels and owls forever gazing upon the passersby below. Though a little out of place when it comes to the more typical Haussmann architecture of the neighbourhood, other things to see close by include the cherry blossoms of Saint-Vincent de Paul Catholic Church in the spring and several covered passages. 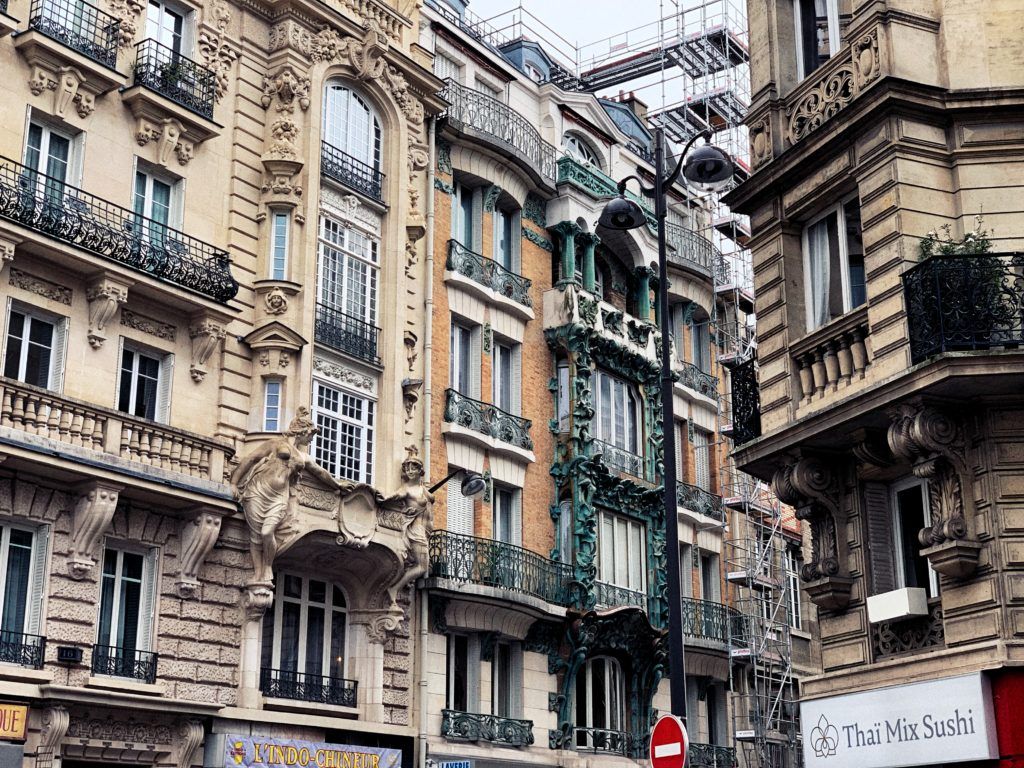 One of the more unusual places to enjoy Art Nouveau in the French capital is within one of its more iconic department stores, that of Galeries Lafayette. After all, the Flagship store of the chain features an impossibly beautiful Cupola (known as Cupole in French).

Lit by hundreds of twinkling lights, the glass domed interior features Art Nouveau fittings and is best admired from one of the central viewing balconies on each of the five shopping levels of the department store.

Come winter, a giant themed tree (with a different theme on an annual basis) is installed, which is well worth admiring if you’re in Paris during Christmastime. If you have more time during your time checking out the Art Nouveau architecture, be sure to head up to the free to visit Galeries Lafayette rooftop terrace which offers one of the best views onto the Eiffel Tower and Palais Garnier Opera House. 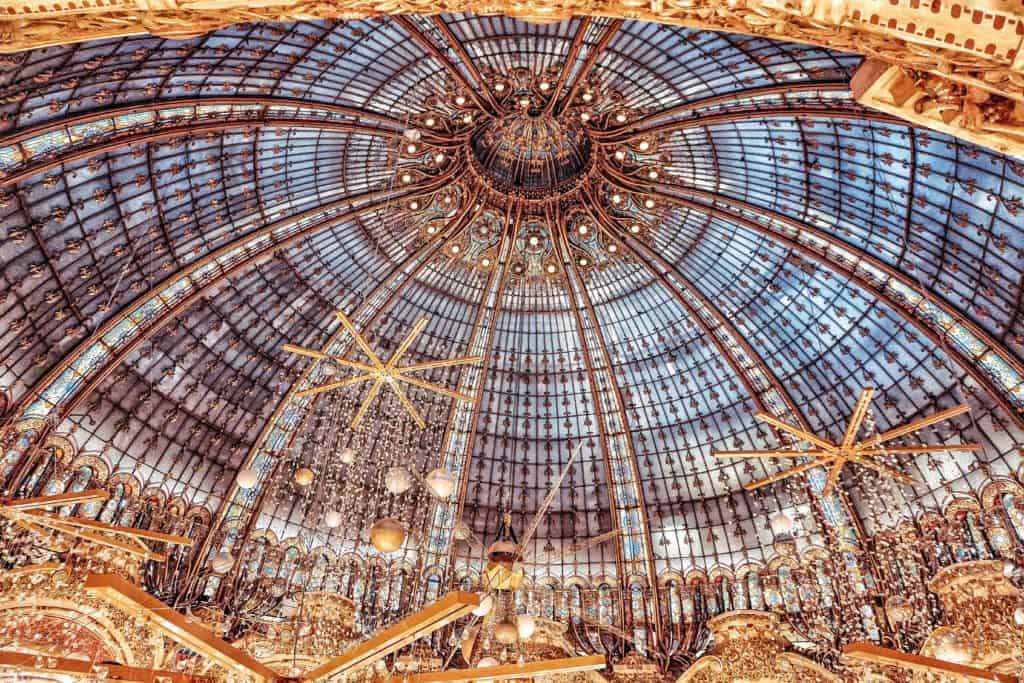 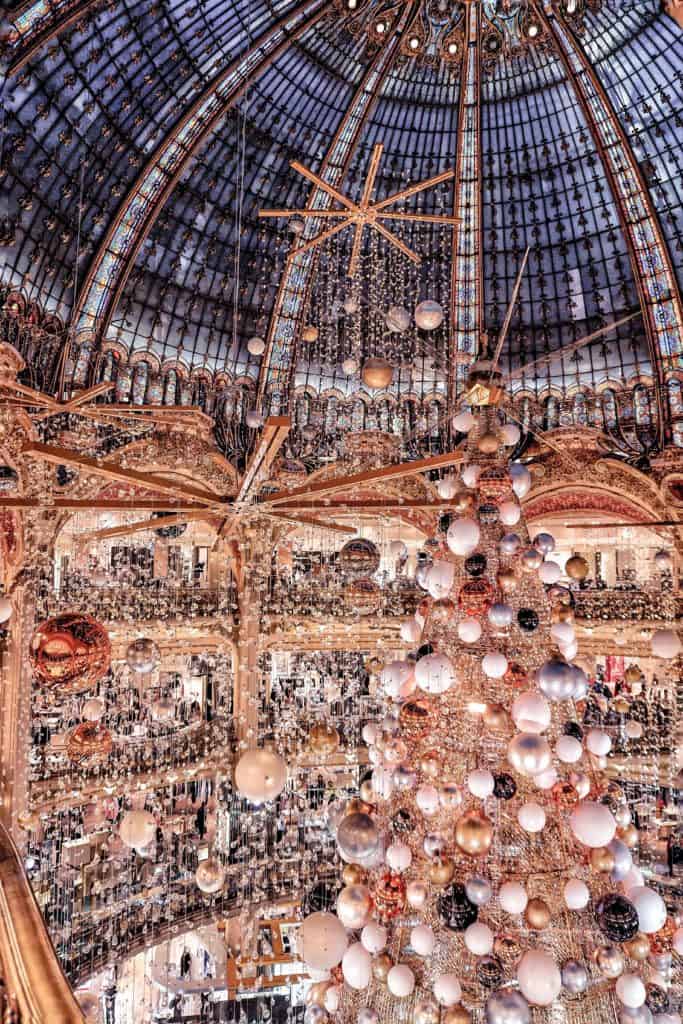 One of the original department stores in Paris is that of La Samaritaine, which is one of the most impressive buildings in the 1st arrondissement of Paris. Newly re-opened to the public for the first time in several decades, La Samaritaine features plenty of Art Nouveau architecture, as well as several restaurants and plenty of concept shopping opportunities.

Perhaps the most interesting feature to note is that the flagship store of the Samaritaine boasts the largest Art Nouveau fresco in France and it dates all the way back to 1907. What’s more is that Gustave Eiffel (the very same man who was born in Dijon and whom the Eiffel Tower is named after) designed the ironwork of the store. 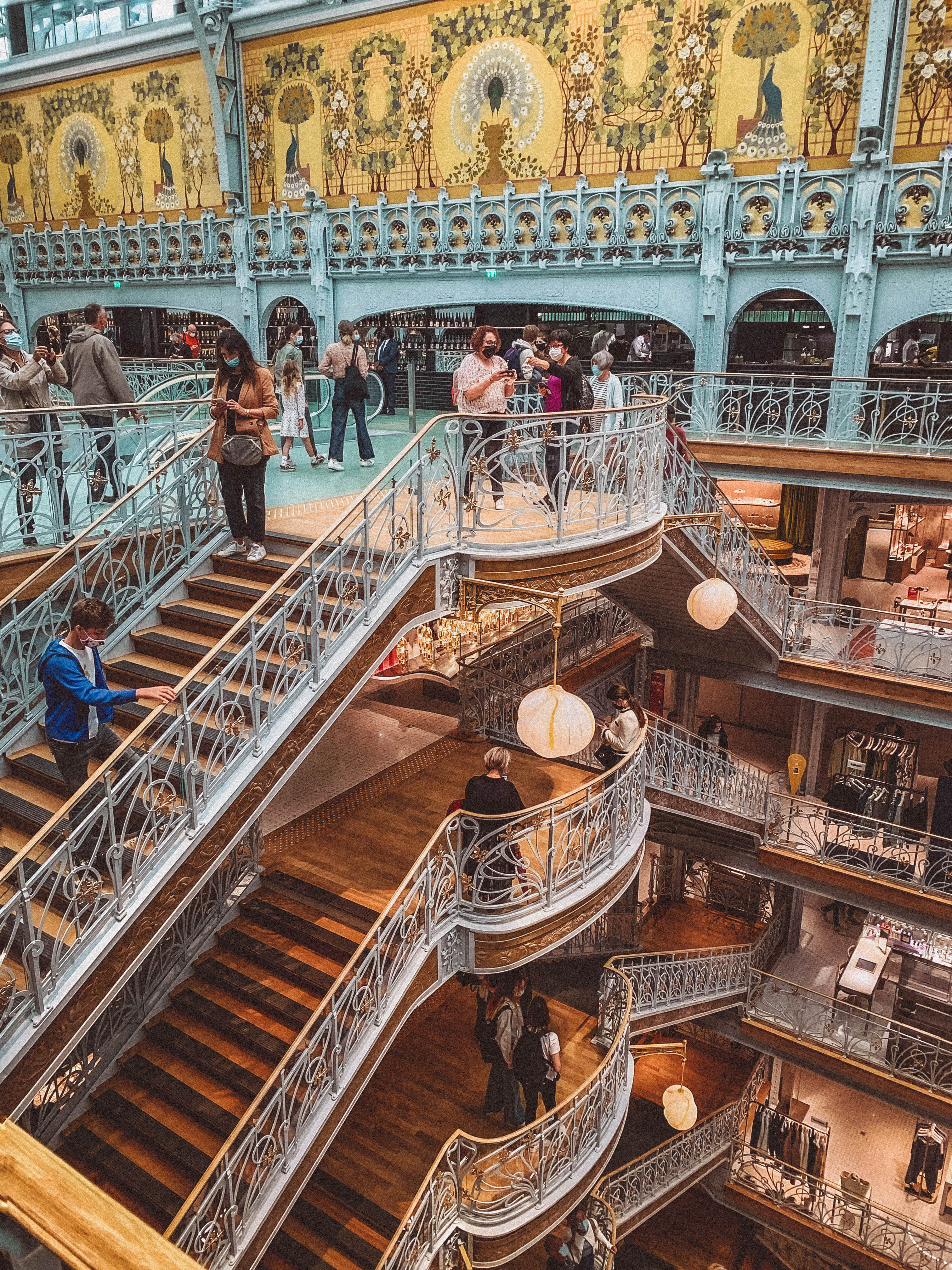 Enjoyed reading about the best of Art Nouveau in Paris? Pin this article now, read it again later: 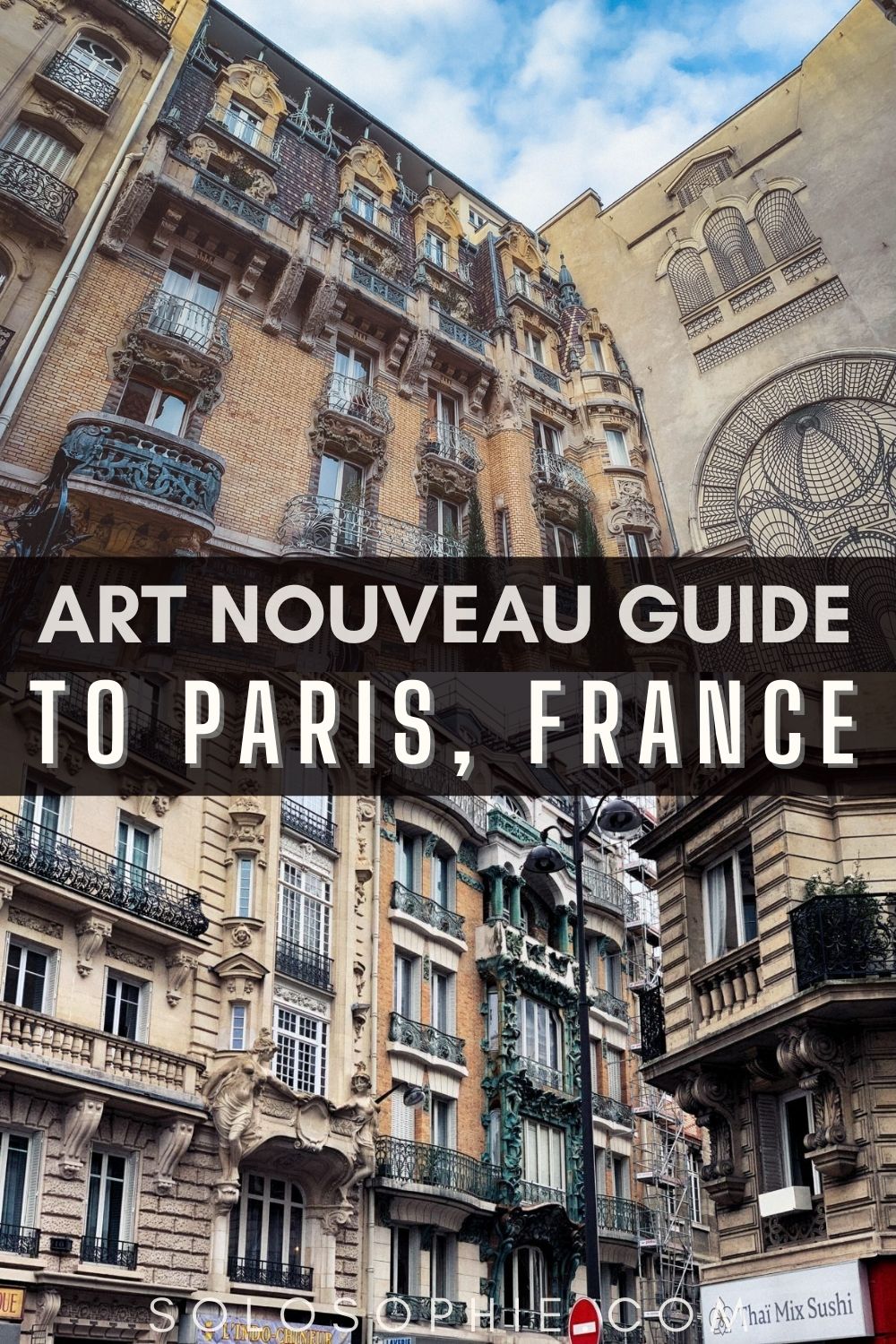 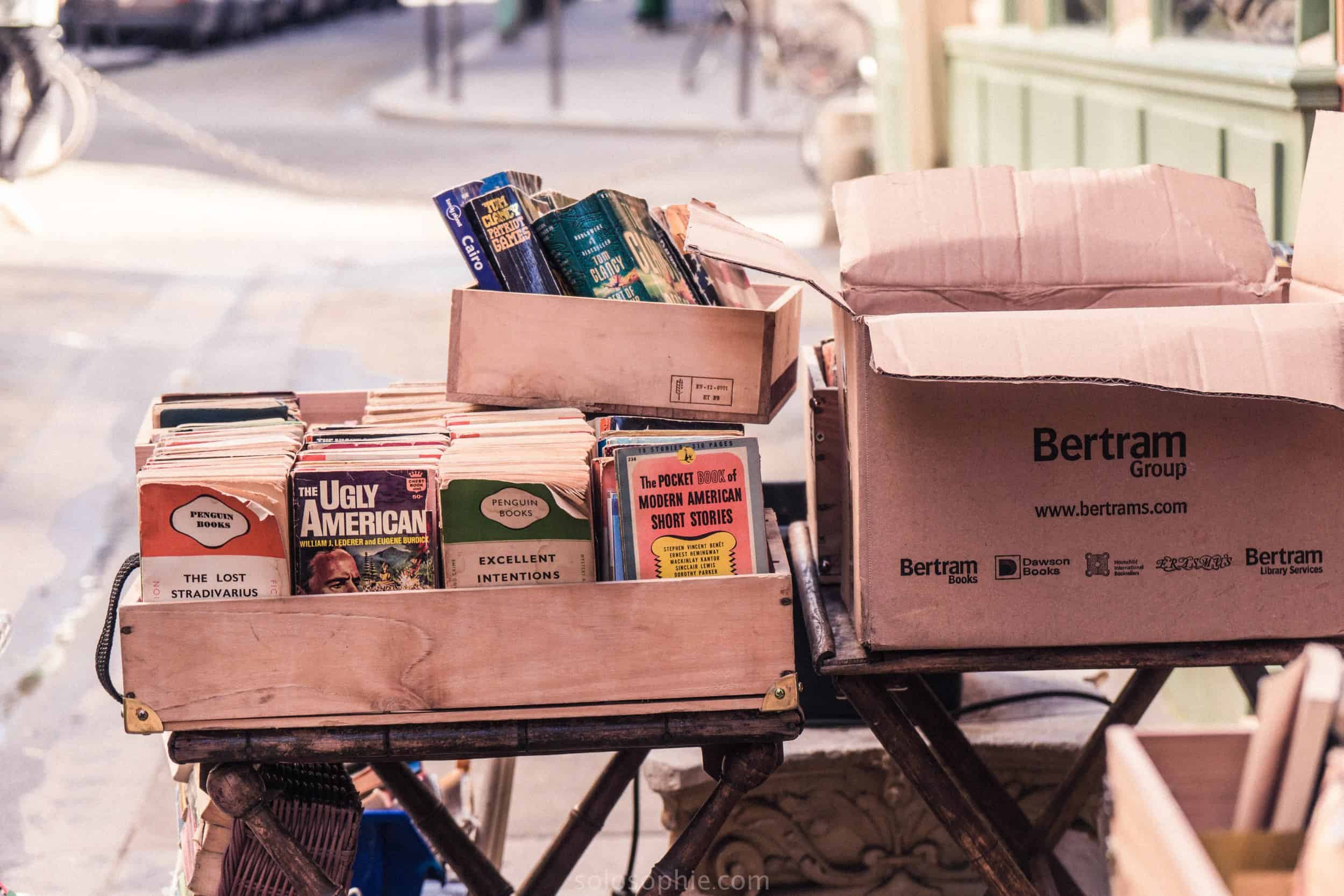 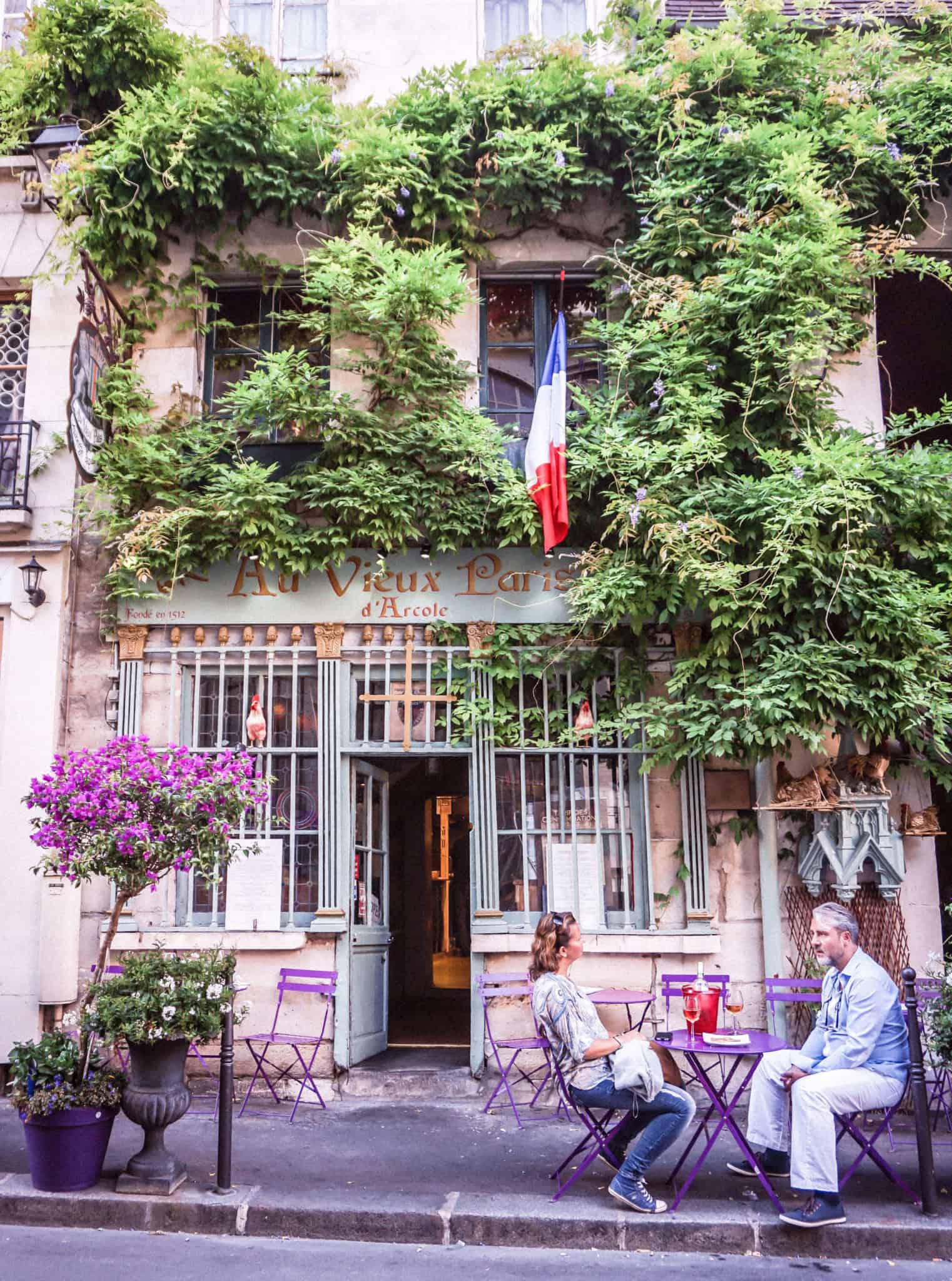 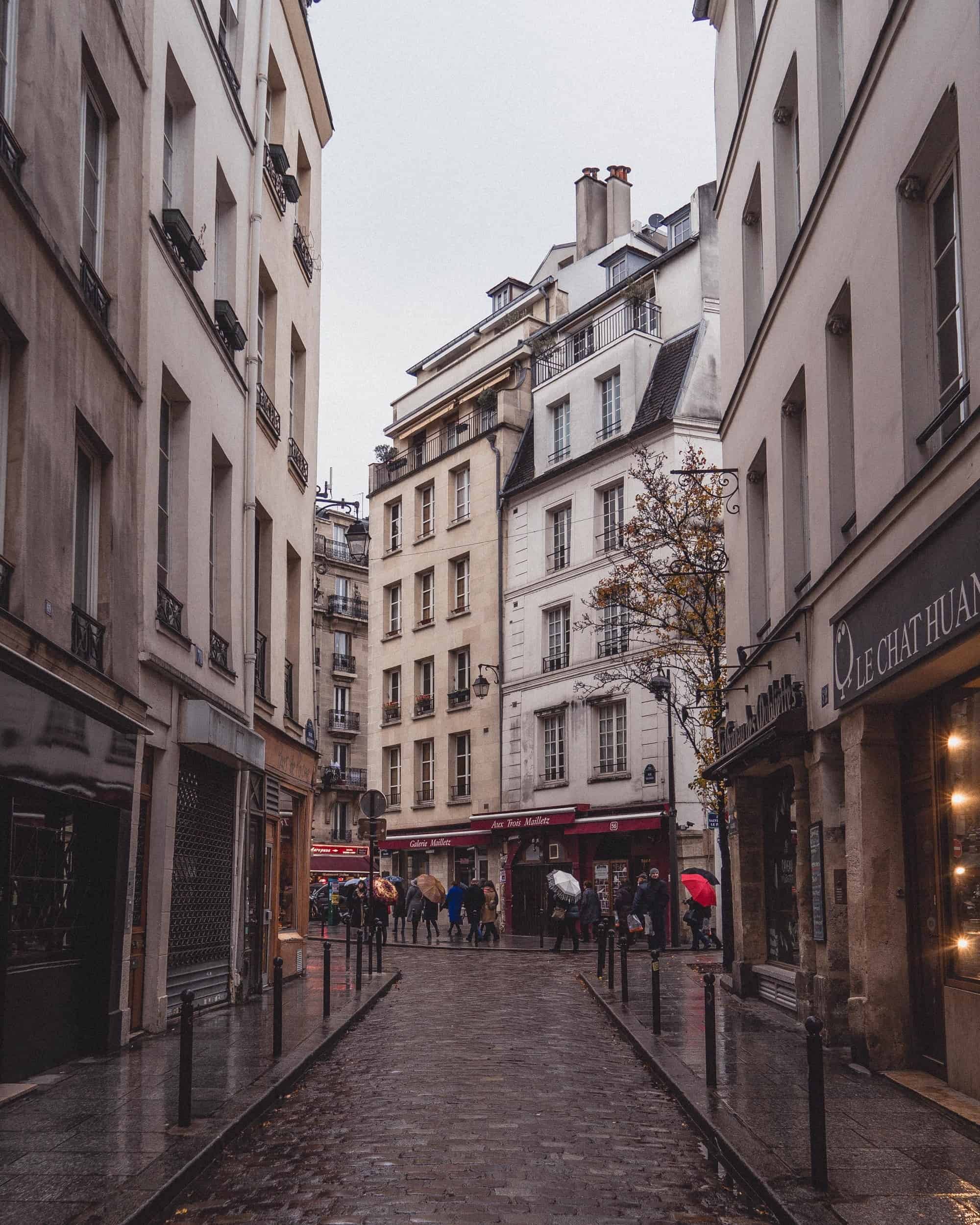