Leiden happens to be home to the oldest university in the Netherlands, which in turn holds its fair share of secrets. Here’s a peek inside of Leiden University’s Zweetkamertje (Sweat Room), whose typically locked door is only opened on the rarest of occasions…

With its charming cobbled lanes, many canal side houses and surprising wealth of hidden gems, the Dutch city of Leiden is the perfect escape from the hustle and bustle of Amsterdam as a side trip or alternatively as a weekend break in its own right.

If you manage to make it into the Sweat Room (typically the area is closed behind lock and key for preservation purposes), then you can expect to find pretty much every inch of the walls covered in graffiti.

Myself and a couple of friends only managed to sneak a peek inside thanks to a kind lecturer allowing us into the room on account of some actual university students being present and waiting to sign their own names on the wall!

The room is one the oldest in the entirety of the University complex and can be found inside the Academiegebouw building, a former monastery turned university building whose roots date back to the 15th-century.

Known as Universiteit Leiden in Dutch, the learning institution was founded all the way back in 1575 and maintains close ties to the Royal family to this day. Across the city, many of the top hidden gems have ties to Leiden University, including the ever so beautiful botanical gardens.

A history of the Leiden sweat room

The room is so-called thanks to the fact that, in times gone by, doctorate students would have stood in the room waiting to defend their theses and dissertations. The room would also have served as a waiting room for those waiting to hear the results of their doctoral exams, hence the name ‘Het Zweetkamertje,’ or ‘the sweating room’ in English.

It was during this time period (it’s unclear as to who created the first signature, or at what date this occurred) that some anxious students would nervously await their results and pass the time by drawing on the walls of the room.

Over the decades, the tradition continued, to the point where every available space was covered in pen markings. Now, signing the wall is a rite of passage for students who have already learned the results of their doctorate.

Though typically closed to the public, students signing the wall are permitted to have up to five accompanying guests. Of course, over the years, the University of Leiden has seen many a notable figure graduate from its programmes, and so they too have signed the wall.

Among famous alumni, there’s Winston Churchill, Nelson Mandela, and the current King of the Netherlands. Particularly high profile signatures can be identified by the fact that they’re typically covered in small glass plaques.

Last but not least, even if you’re not able to see the Leiden Sweat room for yourself, there remain plenty of reasons to visit Leiden on your next trip to the Netherlands… 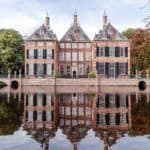 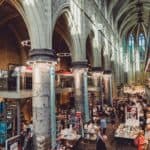 Boekhandel Dominicanen (Bookstore Dominicanen): The Most Beautiful Bookshop in Maastricht 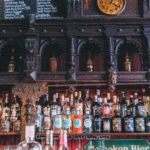 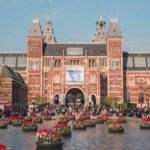