Maastricht is the most Southerly Dutch city and can be found in a meeting point of sorts; a place where three countries can be found in a single square kilometre. Close to the border with Belgium and Germany, the capital of the Limburg Region, and often touted as the ‘most beautiful city in the Netherlands,’ here are some of the best reasons to visit Maastricht ASAP!

All of the history that Maastricht has to offer

Maastricht was founded as early as Roman times, when its position along the River Meuse provided the perfect place on which to construct a settlement. Over the years, the city has seen its fair share of events. While Christianity was brought to the city by St Servatius (whose grave is the focal point of Maastricht’s cathedral), this, in turn, ensured the construction of plenty of monasteries, churches, and chapels.

Centuries later, Maastricht became a city of fortifications, and at one point was regarded as the most fortified city in Europe. Today, traces of these fortifications can be found in the form of the Maastricht Underground tunnels, a maze of passages stretching some 14 km under the streets of the city.

The Limburg capital also boasts a number of museums in which to discover its rich history. Museums of note include the Centre Ceramique (where you can learn about the heritage of the city, as well as the wider region of Limburg), and the Museum aan het Vrijthof (home to an extensive collection of Dutch and Flemish paintings from the 17th-century).

Maastricht is a foodie destination

From Michelin star restaurants to local bakeries, there’s no shortage of incredible places to eat when you’re looking to visit Maastricht, making it the ultimate foodie destination. While in the city, be sure to sample some regional specialties such.

Wine is grown in the wider Limburg region, while you can’t leave the city without tasting Vlaai, a traditional Maastricht pie. Even for a vegetarian and non-meat eater such as myself, there were numerous café and restaurants. A personal favourite was Bread and Delicious: hands down this bakery is home to the best macarons and pastries in the city!

While much of the Netherlands is so flat that the calculations for navigation there are different to the rest of the world, the same cannot be said of the Limburg Region, the area where Maastricht can be found. All rolling hills, lush green forests, and beautiful scenery, this is the Dutch destination to visit if you love hiking and the outdoors.

And while we’re on the subject of rolling hills, it’s worth noting that all of that landscape makes for some fantastic views. That is, if you can get up high enough to admire them! Some of the best viewpoints in the city include Hoeve Lichtenberg (a former castle) and ascending the unusual red tower of Sint-Janskerk.

Maastricht has a cosmopolitan feel

Due to Maastricht’s proximity to several other countries, the city is often said to be the ‘most European’ place in the Netherlands. That is to say, barely a street corner goes by where you don’t hear French, German, Dutch, or a combination of all three! Elsewhere in the city, there’s plenty of incredible food to be found, including cuisine from all across Europe and beyond…

The most beautiful bookshop in the Netherlands is in Maastricht

Housed within a stunning former Dominican church, the most beautiful bookshop in the Netherlands can be found in Maastricht’s city centre in the form of Boekhandel Dominicanen. All high vaulted ceilings, Gothic exterior, and even a centuries-old fresco depicting the life of Thomas Aquinas, there’s even a coffee shop inside where you can enjoy a caffeinated beverage and cake, all the while perusing the shop’s stock.

Maastricht is a place where legend and history meet

For those of us who have grown up listening to French stories, the tales, feats, and adventures of the Three Musketeers likely needs no introduction. But what you may not know is that one of the key characters from Alexandre Dumas’ iconic novels, d’Artagnan was actually a real person…

And he died during the French siege of Maastricht in the 17th-century. Today, a statue commemorating the real-life man can be found in a green park not far from the Casemates.

When it comes to beautiful cities in the Netherlands, the country has many! Away from Holland with its canal filled settlements such as Leiden and Amsterdam, Maastricht offers the off the beaten path traveller the chance to discover hidden gems that most tourists never get the chance to see. From centuries-old city walls to castles worth cycling to, this is the Netherlands as you’ve never seen it before!

Close to the border with Germany and Belgium, Maastricht is a blend of several cultures, culminating in a city that’s nowhere quite like anywhere else in the Netherlands. Whereas the rest of the country is pretty flat, you’ll soon discover that this city is populated by plenty of hills, mounts, and ups and downs.

As such, I highly recommend bringing a good pair of comfortable walking shoes! It’s also worth noting that, like many European cities, the older parts of town are full of cobblestones, and so you’ll probably want to leave your heels at home!

Otherwise, though many people you meet will speak fantastic English, it’s only polite to learn a few words of the local language (in this case, Dutch). Bring along a simple phrasebook like this one to help you get by.

Finally, though the city is not nearly as popular as other destinations in the Netherlands like Amsterdam, the best places do fill up fast. This is especially true of peak season (i.e. the summer) and during special events. Find the best accommodation in Maastricht here.

Enjoyed reading about the best reasons to visit Maastricht? Pin it now, read it again later:

My boyfriend and I visited Maastricht with Visit Maastricht. However, all opinions, words, and photos are my own! 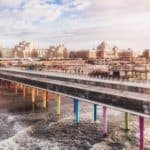 Riding the Ferris Wheel de Pier in Scheveningen at Sunset! 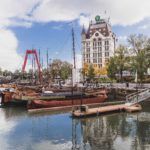