One of the most charming cities in the region of Catalonia in Spain is that of Girona, a picture perfect, pastel hued settlement with plenty of history and a fantastic foodie scene. Best visited over the course of a long weekend, here’s your ultimate guide to the best things to do in Girona and local travel tips to know before visiting for the first time.

If you’re thinking about seeing a lot of attractions and monuments while in the region of Catalonia, Consider purchasing the 12-Month Unlimited Visits Catalonia Monument Pass, which includes access to  29 museums, monuments and historical sites throughout Catalonia. To work out whether or not the pass is worth it for you or not, add up the cost of the individual attractions you wish to visit and see if you’ll save money. Find more details here.

First things first, if you’ve come to this post wondering ‘is Girona worth visiting?’ then the answer is a resounding yes. From sampling local food to delving deep into centuries worth of history, there are plenty of reasons to visit Girona and the city offers plenty of fun activities to keep even the most discerning of travellers entertained.

Girona is located in Northeastern Catalonia in the North of Spain. Not too far from the city of Figueres, the historical city of Girona is situated under 100 km from Barcelona. Though you can take a Barcelona to Girona day trip if you’re short on time, I personally recommend opting to stay a little in the city to discover all that it has to offer. For even more Spain inspiration, be sure to check out our guide to the best-kept secrets of Spain.

What is Girona known for?

Girona is best-known for its Gothic and Romanesque ruins. The city is also home to a number of impressive Roman ruins. In more recent times, the city has also become famous for being where certain scenes in the hit TV show, Game of Thrones, was filmed.

Due to the succession of different cultures which have ruled over Girona over the centuries, the city has plenty of various architectural styles from different time periods that can still be admired all across the Spanish city to this day.

A quick history of Girona

Girona was first founded by the Romans in around the year 79 BCE. Centuries later, the city was then controlled by the Moors and then the Franks. Today, vestiges of the past can be seen and explored all across Girona, though particularly in the historic and largely pedestrianised city centre.

Best things to do in Girona

The city of Girona itself is split into two distinctively different parts, each with their own vibe and ambiance. As their names would suggest, old town Girona is the more historical and older of the two districts, while new town Girona boasts a wide array of newer buildings and more modern architecture. Get to know the city on a more local level by booking a guided tour like this one.

Set deep in the heart of medieval Girona, just streets away from the iconic Romanesque cathedral, you’ll soon discover a breathtaking piece of history that’s one of the best-preserved Middle Ages Baths in this part of Catalonia, if not the entirety of Europe, the Banys Arabs.

Visit any part of Spain and you’ll soon notice that bathhouses are an architectural and historical staple in many of the major cities. Indeed, historic bathhouses can be found in the likes of Palma de Mallorca, Málaga, Granada, Córdoba, and many more cities than I could hope to list within the space of a short blog post! Those in Girona are well worth a visit and cost €3 to enter.

Walk along the medieval ramparts

One of the best ways to get the feel for any new city is to get a bird’s eye view of the place. Girona is no exception and the best vista of anywhere in the city can be found along Girona’s medieval ramparts.

Locally, the medieval ramparts are known as Passeig de la Muralla and all that’s left of the fortifications which once encircled the entire city can be found in the Eastern-most edge of modern day Girona.

Like many towns, Girona is littered with ecclesiastical buildings of all shapes and sizes. From tiny out of the way chapels to Gothic churches, Girona boasts over a dozen churches. But by far the most impressive and largest is that of the Cathedral of Saint Mary.

As with the rest of the city, the Catedral de Santa María actually features a wide array of architectural features. Of particular interest is the Gothic Nave, which at 23 metres in width puts it at the widest Gothic Nave in the world.

Other unusual features of the cathedral include Romanesque cloisters and a medieval bell tower. The cathedral was built between the 11th and 18th centuries and the steps in front of the impressive structure have been used as many a filming location, including Game of Thrones. Purchase your combination Art Museum, Cathedral, St. Felix Church 3-in-1 Pass here in advance.

Of all of the viewpoints in Girona, the most beautiful and photogenic is probably the Onyar River view. Pastel and candy hued houses are scattered along the banks of the River Onyar. For the best photo, I recommend heading to the river on a sunny and blue skies day as this is when the houses look at their best.

Wander around the Jewish Quarter

One of the most historic places in Girona is the Jewish Quarter, which is known locally as ‘El Call’. A maze of narrow cobbled lanes and wonky staircases, this part of the city offers wonderful photo opportunities, the chance to spy unique architecture, and plenty of independent foodie spots.

Visitors to Girona can’t go wrong by allowing themselves to get a little lost in this Girona district, if only for a few hours After all, little has changed in this part of the city during the past 500 years.

Before heading to Girona, be sure to pack some comfortable shoes as this area of the city can predominantly only be explored on foot. To delve deeper into the Jewish heritage of Girona book a guided tour like this one.

When researching for the best things to do in Girona, one foodie hot spot came up in our research again and again. Rocambolesc ice cream was created by the Roca Brothers, who are internationally famous thanks to the fact that they own one of the top-rated restaurants in the world!

The ice cream is as delicious as it looks in photos and I highly recommend paying at least one visit during your time in Girona. What’s more is that the ice cream parlour serves six rotating flavours at any given time, meaning that no two visits will ever be the same.

One of the quainter town squares in Barcelona is that of Plaça de la Independència, which can be found on the fringes of the old town. During the warmer months of the year, this is one of the best spots to sit outside on a terrace, sip on a coffee, and watch the world go by.

Those feeling a little peckish might also consider ordering tapas. Tapas is a traditional Spanish food experience whereby its customary to order savoury small plates which are perfect for sharing. These dishes usually consist of snacks and appetisers such as cold meat cuts, patatas bravas (a potato dish), and sautéed vegetables.

Though arguably not as impressive as many of the Christmas markets of Eastern France or Western Germany, Girona nonetheless hosts its very own Christmas Market. The festive event is traditionally held from the beginning of December to the beginning of January each year on the Plaça de la Indepèndencia square.

Look out for Game of Thrones filming locations

Search for hidden gems in Girona

Though Girona has become more than a little popular over recent years thanks to its presence in Game of Thrones, there remains plenty of hidden gems and secret spots worth uncovering. From ‘kissing a lion’s bottom’ to finding a piece of Game of Thrones costume in the strangest of places, discover the best-kept secrets of Girona in our guide.

One of the more unique places to visit in Girona is that of Eiffel Bridge. In the middle of where you’d least expect, there’s a red steel structure that spans both sides of the River Onyar, linking the medieval town to the newer 19th-century expansion.

Offering picture-perfect views of the old town (including the cathedral), this bridge was actually constructed by none other than Gustave Eiffel, of the Eiffel Tower in Paris variety!

Art lovers will be delighted to discover that Girona boasts its very own art museum, which is known locally as Museu d’Art de Girona. Once inside, visitors can enjoy Catalan art works set against the backdrop of an ancient episcopal palace. Purchase your skip the line ticket here in advance.

Take a day trip to Besalú

Easy enough to reach as a day trip from Girona, if you’re looking for an off the beaten track activity then you simply need to head to the medieval village of Besalu.

Once a powerful hub during the early medieval period, today Besalú is home to attractions such as plenty of medieval architecture, including a well-preserved arch bridge, many historical churches, and some incredibly beautiful vistas. If you want all the details taken care of, consider booking a guided tour to Besalú like this one.

Where to stay in Girona

During both of my overnight stays in Girona, I’ve been lucky enough to stay at the AC Bellavista. Perched high above the rest of the town, the accommodation even has its own rooftop bar (complete with a small pool) where you can enjoy a crisp glass of rosé at sunset, all the while admiring the Pyrenées in the distance. See the full details here!

What is the population of Girona?

What are the best free things to do in Girona?

Those visiting Girona on a budget will be pleased to know that there are a number of low cost activities and attractions on offer. Some of the best free things to do in Girona include wandering around the many cobbled lanes of the historic city centre, walking across the Eiffel bridge, and walking along the Medieval Walls.

Is Girona safe to visit?

Girona is generally as safe as most other destinations in Europe, though petty crime can still occur. Visitors should be especially wary of pickpockets (pickpockets operate all over Europe and so you should always keep your things close, particularly in crowds). Never leave your valuables lying around or attended. I personally recommend always wearing a crossbody bag like these ones.

Enjoyed reading about the best things to do in Girona? Pin this article now, read it again later: 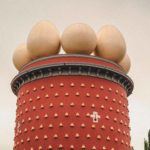 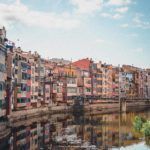 Barcelona to Girona: A Game of Thrones & Medieval Day Trip 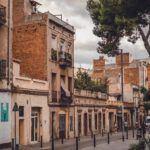 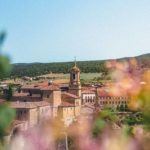