Home to oodles of charm and even more history, here’s your ultimate guide on how to take an excursion from Barcelona to Girona, as well as insider tips and things to know before you go!

For fans of the hit TV show, Game of Thrones, the stunning city of Girona likely needs no introduction. Set over two sides of the River Onyar, this pretty as a postcard town is well worth a day trip from Barcelona, or even as an overnight stay in its own right.

Even if Girona isn’t already on your Catalonian bucket list, I’m telling you right now that it totally should be! Home to no fewer than two Michelin star restaurants, a plethora of medieval sites, as well as Roman ruins, this Costa Brava town is so picturesque that you’ll soon discover yourself snapping photos on near enough every corner.

Wander around the town for any given length of time, and you’ll soon discover that Girona has a wealth of hidden gems worth discovering; from a bridge built by Mr Gustave (of the Parisian Eiffel Tower variety) to a cinema museum, there’s no shortage of well-kept secrets in Girona.

There’s even an archaeology museum housed within a former Romanesque Church, and even a tiny chapel where you can worship together with nuns from behind a visitor screen (Esclavas del Santísimo Sacramento y La Inmaculada), there’s a curiosity for even the most discerning of travellers.

The view from our luxurious hotel, which offered breathtaking views onto the Pyrenées  from an unforgettable rooftop terrace complete with a swimming pool (see all the details here!)

Top things to see and do in Girona

Though you’d do well to plan your visit to Girona so as to be overnight (this way you can enjoy all of the major attractions that the city has to offer), the town is pretty compact and easily walkable.

At a push, many of the top things in Girona to do can be done over the course of a day. As such, bring along your comfiest walking shoes and get ready to clock up those steps. Oh, and don’t forget to bring your camera along!

When researching for the best things to do in Girona, one foodie hot spot came up in our research again and again. Rocambolesc ice cream was created by the Roca Brothers, who are internationally famous thanks to the fact that they own one of the top-rated restaurants in the world!

The ice cream is simply delicious and is served in a soft-serve style, together with toppings (for an extra fee). Take your ice cream to go (in a cone or cup) and stroll along to one of the nearby bridges, where you can enjoy your sweet treat with a side of gorgeous architecture. Game of Thrones fans will be delighted to discover that one of the Ice Lollies is shaped like the hand of Jamie Lannister.

Follow in the footsteps of Game of Thrones filming locations

For those not in the know (I’m sure I’m not the only one to have not seen GoT!), Girona featured as the town of Braavos in the 6th Season of the show. Of course, ever since the iconic show was filmed in the medieval streets of Girona, fans have flocked from near and far to see the stunning medieval bridges, and of course, the Romanesque and Gothic Cathedral which costs €7 to enter, but is free to enter for worshippers.

Stroll around the Arab Baths

Situated just a few minutes walk from the base of the Cathedral, the Arab Baths are ever so pretty and well worth the two euro entrance fee. As well as featuring in Game of Thrones, these 12th-century Baths (which are styled after earlier Roman models) are authentically preserved and offer a glimpse of the Romanesque style in a way that you’ve likely never seen before.

No, really! In the heart of the old town, there’s a historic statue dating all the way back to the 12th-century. Set atop a stone poll, legend has it that if you kiss the lion statue’s bottom, then you’ll return to Girona, or Gerona as it is known in Spanish.

And while the current statue is actually a replica of the original (the latter now housed within the archaeology museum), my most recent visit to Girona was my second- so I’ll let you do the maths!

Enjoy the view from the historic ramparts/ city walls

Throughout the city, there’s no shortage of beautiful locations from which to enjoy breathtaking views of Girona spread out below, and the mountainous peaks of the Pyrenées beyond.

One of the best views in town is to be found along the Passeig de la Muralla, a part Roman and part medieval half-a-mile-long restored wall comprising of watchtowers, steps, and of course, panoramic viewpoints.

Girona is situated around 100 km North of Barcelona, along the Costa Brava. If you’re driving by car, then the journey takes around an hour and twenty minutes. However, I would personally forgo the car as driving around Barcelona itself is stressful and you’ll have to worry about parking when you get to Girona!

Instead, opt for the new high-speed train, which goes from city to city in just 37 minutes. If you’re looking to visit Girona on a self-guided excursion by train from Barcelona, then you should know before you go that there are actually two types of trains available.

Don’t make the Girona travel mistake we did, and end up taking the slower train as this will waste your valuable time in the city and leave you more than a little frustrated!

The faster train takes just under forty minutes, while the slower train (which is generally cheaper if you’re looking to purchase tickets on the day) takes around an hour and a half, on account of the fact that it stops at all of the regional stations en route to Girona. Trains from Barcelona to Girona depart from Barcelona Sants station on a regular basis and are typically those headed to the city of Figueres.

Check here to book your train tickets from Barcelona to Girona in advance.

If you’re looking for a hands-off way to take an excursion from Barcelona to Gerona, then you may well consider booking a guided tour. These trips from the Catalonian capital are typically guided and give you an insight (as well as occasional museum entry included, tour depending) into the history of the region, as well as insider knowledge, and filming locations.

For the ultimate fan experience, this Game of Thrones tour to Girona from Barcelona will immerse you in the world of Braavos, from the sixth season of the hit show.

Taking place over half a day, top highlights include free time to wander the medieval streets, a visit to Girona Cathedral, and the chance to learn about both Girona’s medieval and Roman past. Check prices and availability here.

If you wish to see both Girona and Figueres, as well as the Dalí Museum, then this tour from Barcelona packs plenty into the 11-hour excursion. As well as a visit to the medieval town of Girona (where some of Game of Thrones was filmed), this excursion includes a guided walking tour of Girona, as well as fast-track entrance into the Dalí Museum. Check prices and availability here.

The delightful town of Figueres, the birthplace of Salvador Dalí

Girona and Figueres Full-Day Tour with Hotel Pick Up

For those who are looking to visit both Girona and Figueres as a day trip from Barcelona, then this guided tour also includes a hotel pick up option. The tour lasts for eight hours.

The tour includes highlights such as the historic sites of Girona, as well as Figueres (i.e. the birthplace of Dalí). Groups are capped at 8, so as to enhance the personalised experience. Please note that, unlike the above ticket, this ticket does not include entry into the Dalí museum. Check prices and availability here.

Girona and Costa Brava Tour with Hotel Pickup in Barcelona

This incredibly well-reviewed tour features the chance to explore the medieval city of Girona, as well as the stunning landscapes of the Costa Brava. Taking place over the period of eight hours, highlights include the fishing village of Calella de Palafrugell and the chance to learn about the ancient Caminos de Ronda. Check prices and availability here.

If you’re hoping to see two of the most iconic Barcelona day trips in one day, then this excursion to Montserrat and Girona is for you. Included in the excursion from the Catalonian capital is a guided walking tour of Girona, a taste of several local liqueurs, and the Cogwheel train journey to Montserrat. Check prices and availability here.

Enjoyed reading this guide on how to take a day trip from Barcelona to Girona? Pin this article now, read it again later: 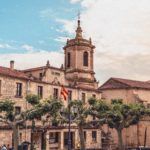 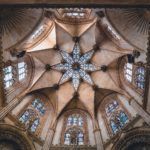 Secrets of Burgos Cathedral, The Hidden Gem of Northern Spain 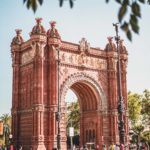 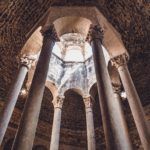 How to Visit the Banys Àrabs (Arab Baths) in Girona
30 shares
Click here to cancel reply.