Introducing Stratford-upon-Avon, the home of Shakespeare

A pretty town filled with timber-framed houses and countless quaint inns, Stratford-upon-Avon can be found on the fringes of the Cotswolds, an area of outstanding natural beauty in Southern England. Highlights of the town include an incredible foodie scene, several museums, and plenty of boutique shopping experiences.

In the very heart of Stratford, William Shakespeare was born to Mary Arden and John Shakespeare, a glove maker and wool dealer, in 1564. This 16th-century timber-framed cottage can be found on Henley Street and it’s thought that William spent much of his childhood here.

During the 16th-century, the house was divided into two parts so that John Shakespeare could conduct business from the evidence. William Shakespeare’s birthplace is now open year-round and has been transformed into a small museum. The Shakespeare Centre is located next door and the house itself is decorated with simple yet contemporary furniture.

Once home to Shakespeare’s granddaughter, Elizabeth Hall, Nash’s House was constructed around 1600. The house belonged to Thomas Nash, the first husband of Elizabeth Hall. Today, the former residence operates as a museum detailing the history of Stratford and its surrounds.

Next door, you’ll find the ruins of New Place. This house was Shakespeare’s retirement home from 1610 and was his final place of residence. It’s thought that the playwright died there in 1616 and Shakespeare left New Place to his daughter Susanna following his death. Today, New Place is now a tranquil garden open to tourists.

Named for the physician Dr. John Hall, the former Jacobean home of Shakespeare’s eldest daughter, Susanna, and her husband, Hall, is now a museum. Situated in the very heart of Old Town Stratford, not far from the church of the Holy Trinity, Hall’s Croft now operates as a museum and delightful walled garden.

The building itself is Grade I listed and contains lots of 16th and 17th-century furniture. However, out of all the displays, the most fascinating is that of an exhibition dedicated to obscure medical practices of the Elizabethan and Jacobean eras.

Visit Mary Arden’s House, a few miles from the centre of Stratford in the small village of Wilmcote, and you can actually expect to find two fully refurbished Elizabethan houses on site. One is the former home of Mary Shakespeare (née Arden), while the other is a farm which belonged to neighbours by the name of Palmer.

Although there’s no concrete proof, it’s thought that many of William Shakespeare and his relatives survived the Plague (which tragically wiped out much of the population on Stratford) by escaping to Mary Arden’s former house in the countryside, just a few miles from the town.

Today, this working Tudor farm can be visited for a small fee from March through to November. Once there, you can see wool spinning demonstrations and experience Tudor cooking demonstrations from people dressed in traditional Tudor dress.

Dubbed ‘the most visited Parish Church in England,’ the final resting place of Shakespeare is also the place where the bard was baptised. The Holy Trinity Church sits just steps away from the glittering River Avon, is open year ’round, and is thought to have over 200,000 visitors on an annual basis!

This Grade I listed building is often referred to as ‘Shakespeare’s Church’ and a church has stood on site since Saxon times. The roots of the current ecclesiastical building date back to the 13th-century, making the Holy Trinity the oldest building in Stratford-upon-Avon.

While entrance to the church itself is free, you’ll have to pay to the choir and beyond in order to see Shakespeare’s Grave, which is located towards the front of the church. While it’s understandable that the church needs donations to run, it seems more than a little macabre to be charging people to visit someone’s grave!

Although not strictly a Shakespeare location in Stratford-upon-Avon proper, Anne Hathaway’s Cottage is located in a quaint village by the name of Shottery and is situated just a mile from Stratford. Shakespeare’s future wife, Hathaway lived in the cottage prior to her marriage to the playwright.

I visited Stratford-upon-Avon with Shakespeare’s England. However, all opinions, words, and photos are my own! 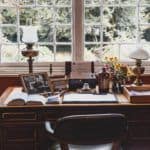 Following in the Footsteps of Thomas Hardy in Dorset 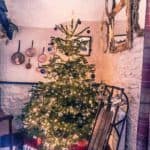 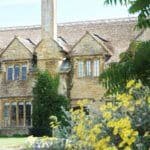 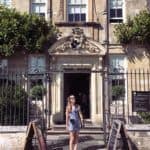