Alleged to be the place where Joan of Arc was burned at the stake, the location where Rollo the Viking is buried, not to mention one of the most important cities in Northern France: when it comes to Rouen, there’s certainly no shortage of history to be uncovered. Here’s a free and self-guided Rouen walking tour you’ll love to follow… 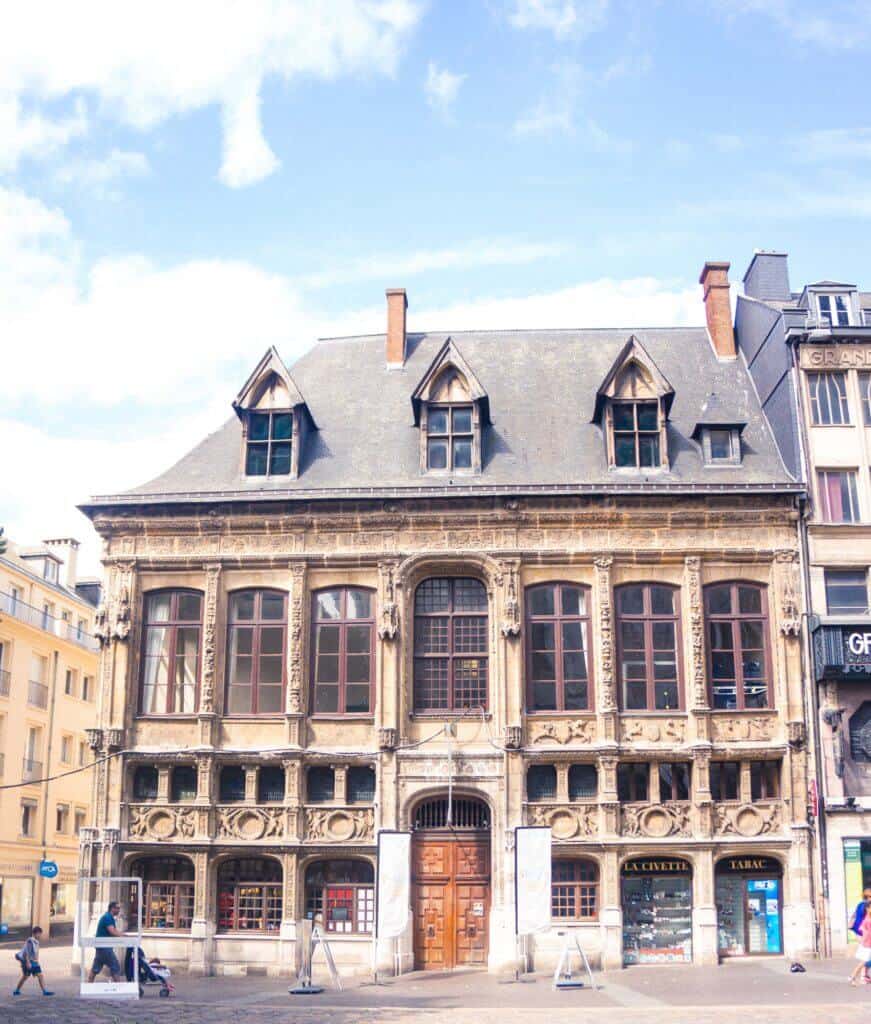 This walk is best attempted on a sunny day thanks to the number of outdoor things to see and do within the city! With this being said, if it is indeed raining during your stay then rest assured that there are plenty of cafés and shops en route where you can shelter from the rain, warm up with a delicious hot chocolate, or do a little boutique shopping.

Otherwise, it’s worth noting that like many European cities, there are several cobbled lanes across Rouen and so this isn’t the place to wear your high heels! As Rouen is the capital city of Normandy, you’ll soon discover that many people speak a great level of English. However, it’s only polite to learn a few words of the local language, in this case, French. Bring along a French phrasebook like this one to help you get by.

This walking tour begins in the very heart of the administrative side of the city, at the Hôtel de Ville, i.e. the town hall. Situated a little way outside of the historic city centre, the Hôtel de Ville is constructed after the Gothic style. Once upon a time, the town hall would have been located next to where the Gros Horloge is now to be found.

In 1800, the administration was moved to the former Abbey of Saint-Ouen and offices are now located in the former Monk dormitories and  Having survived the intense destruction of the city during WWII, today the building’s façade provides an excellent glimpse of Medieval architecture meets 19th-century construction.

While the Abbey of St Ouen was disbanded and dismantled following the French Revolution, the church of the Abbey itself still stands to this day and is situated beside the Hôtel de Ville. Constructed between 1318 and 1537, you can visit the Church on Tuesdays, Wednesdays, Thursdays, Saturdays, and Sundays throughout the year. Check out the full opening times on the Abbey’s website here.

Have a coffee at L’ Espiguette

Located in what may well be the very prettiest square in all of Rouen, you’ll want to sit outside to enjoy the ambience, snap photos of the timber-framed houses surrounding you and simply watch the world go by. Head to L’Espiguette for a quick coffee before embarking on the rest of your self-guided walking tour of Rouen! 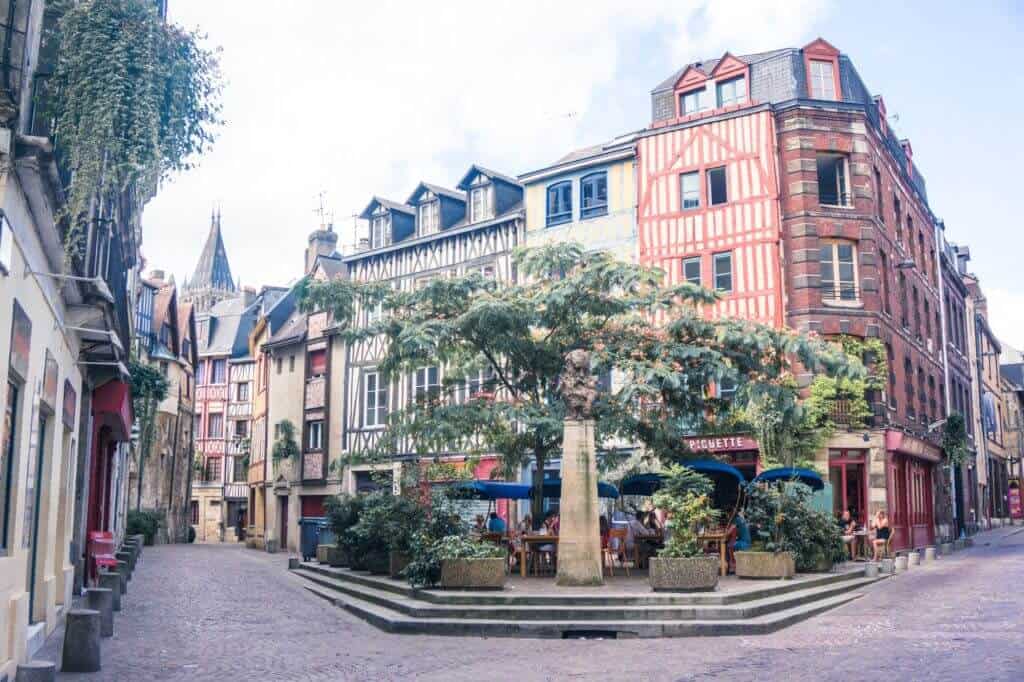 Truth be told, Rouen’s stunning Cathedral is truly the main reason to visit Rouen. As well as being the burial place of Richard the Lionheart and Rollo the Viking, among many other famous figures from history, the Gothic ecclesiastical building was even once the tallest building in the world.

Consecrated on the 1st of October 1063 in the Presence of William the Conqueror, there has been a church present on site since as early as the 4th-century. The building you see today is free to visit, open on a daily basis (though services may mean that you can’t freely wander around Rouen Cathedral) and is constructed after several veins of the Gothic style. 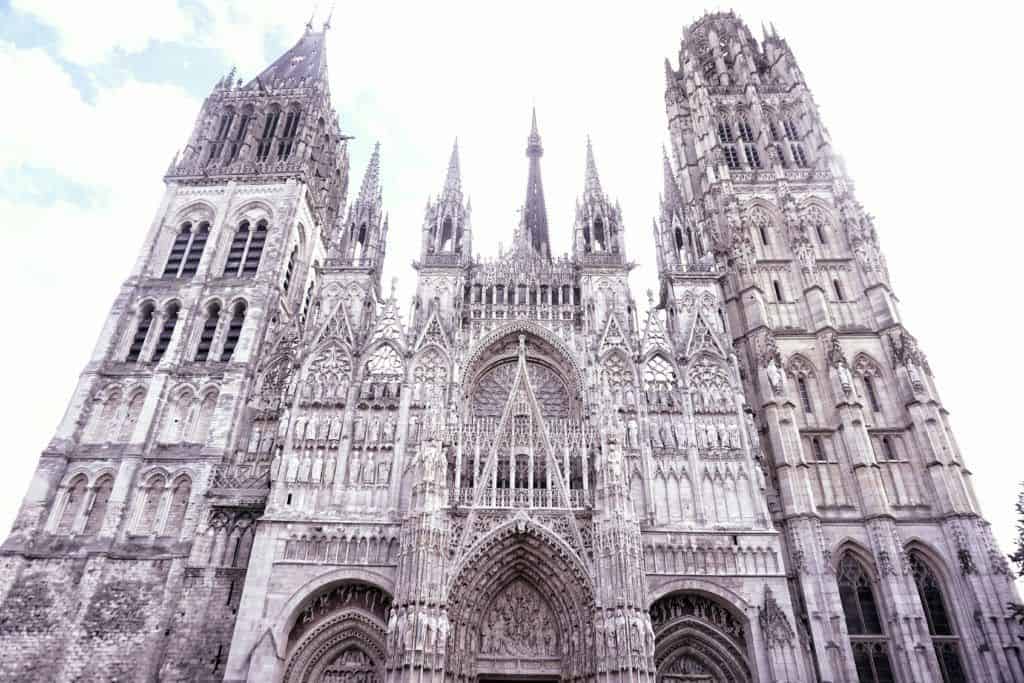 Easily one of the most impressive public clocks in France, the movement of the Gros Horloge of Rouen dates all the way back to the late 14th-century, providing a fantastic insight into technology in Medival France. Even today you can still enjoy watching time pass by right in front of your eyes.

Much like the cock of Auxerre, there are two faces set either side of a watchtower. Head to the side furthest away from the Cathedral, turn around and you’ll be rewarded with a true glimpse of medieval France, including many timber-framed houses! Otherwise, you should know that you can visit the Gros Horloge, for a fee, from Tuesday to Sunday (hours vary across the year). 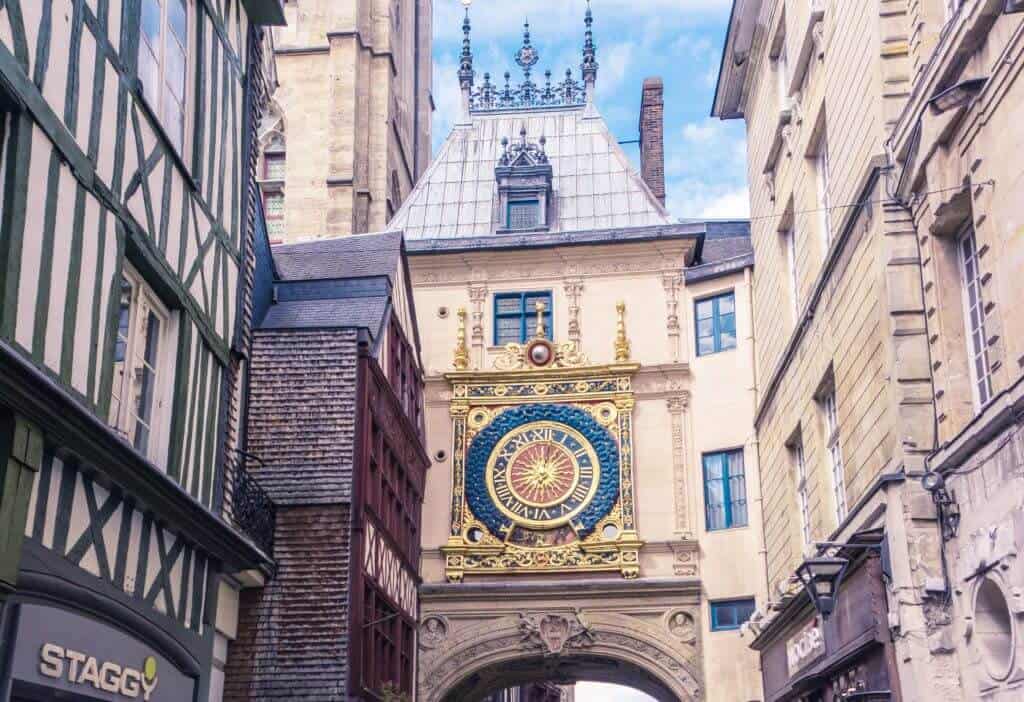 Church of Saint Joan of Arc

Of course, thanks to Rouen’s historical importance as a seat of power within the church, the city has no shortage of unusual and quirky ecclesiastical buildings. However, truth be told, the most unique of them all certainly must be the Church of Saint Joan of Arc.

A fantastic feat of modern engineering, the church is constructed next to the site where Joan of Arc was martyred for heresy (there is debate as to whether this actually happened or whether Jeanne d’Arc as she is so-called in French actually managed to escape). Free to visit, though gratuities are of course welcomed, the Église was only completed in 1979.

Much like the city of Limoges, Rouen is world-renowned for its history of ceramics. As such, there’s a fairly large museum within the very heart of the city, dedicated entirely to the craft. The Rouen museum was established in the mid-19th-century and the cultural institution is housed against the backdrop of the former hôtel d’Hocqueville, which in turn is constructed on the remains of the Château de Rouen.

For those who wish to experience a museum in Rouen but don’t fancy walking through rooms filled with ceramic exhibits, the Museum of Fine Arts of Rouen can be found just a short stroll away from the Ceramic Museum. Well-reviewed and boasting a wide array of art pieces from artists of Normandy and beyond, the permanent collections are completely free to visit!

The tower of Joan of Arc is all that remains of a once impressive Castle which would have guarded the city. Perhaps rather interestingly, the Château de Rouen was not the first building to have existed onsite. Instead, the castle was constructed on the site of the Gallo-Roman amphitheatre, from a time when Rouen would have been known as Ratumacos.

Of all the places on this Rouen walking tour, I highly recommend heading to the tower, if only to catch a glimpse of fortified medieval Rouen in real-life. Dating back to the 13th-century, today, the Tower of Jeanne d’Arc is free to visit on weekends from 10 AM to Midday. 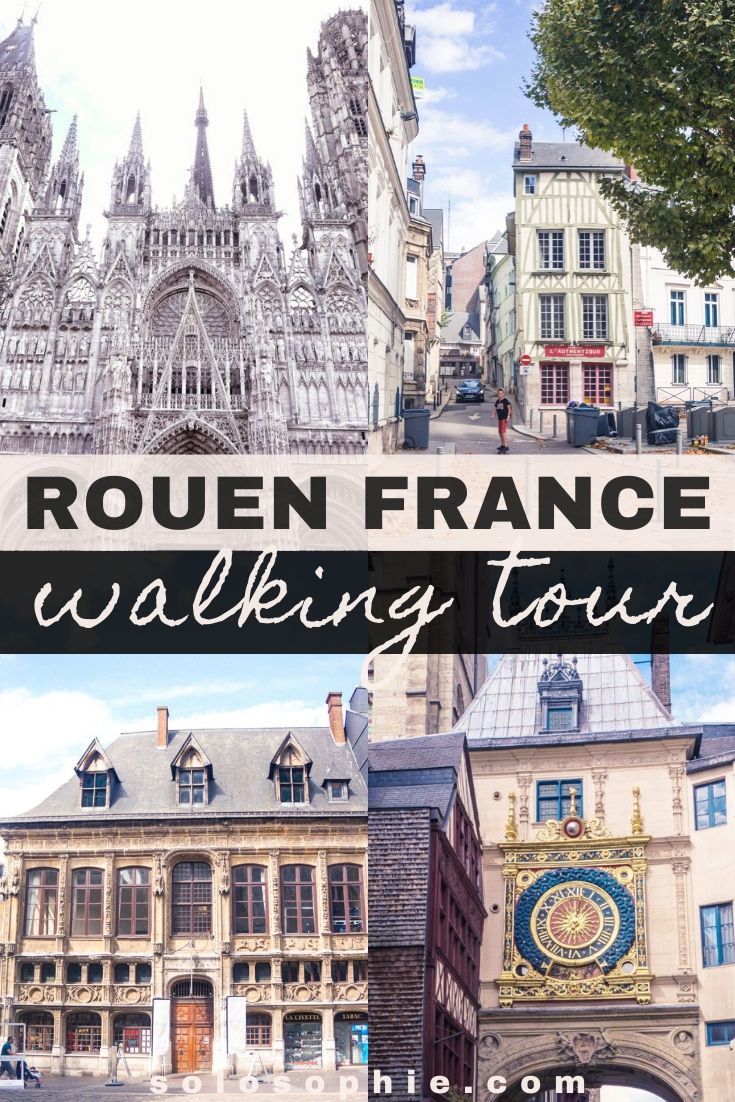