A little way along the riverside from the iconic Charles Bridge and many streets away from the iconic Astronomical Clock, the Prague Dancing House (formally known as the Nationale-Nederlanden Building) is easily one of the most photogenic sites the Capital City of the Czech Republic has to offer.

And in a city best-known for its Neo-Baroque, Neo-Gothic, Gothic, and Art Nouveau architecture, the modern masterpiece is certainly a break from the norm! Here’s everything you ever wanted to know about the Dancing House of Prague (known locally as Tančící dům), as well as how to visit (and stay!) and a quick history…

A history of the Prague Dancing House

Originally called ‘Fred and Ginger’ thanks to the famous Hollywood film dancing duo, Fred Astair and Ginger Rodgers of the 1930s, the name was soon dropped as co-architect Gehry didn’t want to bring American Hollywood ‘kitsch’ into Prague.

Seven storeys in height, many local residents fondly refer to the building as the ‘Drunk House’ thanks to its swaying nature beside the River Vltava! Rather ironically, during our stroll towards the Dancing House of Prague in the morning, it wasn’t unusual to pass by a few revellers who hadn’t yet returned home to bed, even as late as 7 or 8 in the morning!

The brainchild of co-architects Frank Gehry and Vlado Milunić, the land where the house now stands was heavily bombed during 1945. For several decades, during Communist times, the lot stood empty, right up until the ‘Velvet Revolution’ of 1989.

During this time, Václav Havel, a little known philosopher and Political Dissident, who would go on to become the last President of Czechoslovakia and first president of the Czech Republic envisioned the space be turned into a place for vibrant city life; a symbol of democracy and a place which could stand at the heart of the city’s cultural and social life.

Shortly after the Velvet Revolution, Havel contacted a former neighbour, Vlado Milunić, with his idea for the project of a cultural centre. However, Havel’s plan was neve realised, as the Dutch insurance company that sponsored the site, Nationale-Nederlanden (though you might know them as ‘ING Bank’), had other plans and the building was instead used for office space.

The French architect Jean Nouvel was approached for the project but turned it down on account of the size of the ‘small’ plot of land to work with. Luckily, soon enough, Canadian-American Frank Gehry accepted the project invitation and joined it alongsideVlado Milunić. Funding for the Dancing House was almost ‘unlimited’ and so the architects were allowed to run away with their designs (and their imaginations).

The resulting building was built in the rather controversial ‘deconstructivist’ (or ‘new Baroque’) style; a very modern concept when set against the backdrop of an area filled with Neo-Baroque and Art Nouveau buildings.

Construction of the Prague Dancing House began in 1992 and was completed four years later in 1996. The Dancing House in Prague has since become a well-loved feature of the city, so much so that it now features on the collector’s piece, the 2,000 Czech Koruna coin.

How to visit the Dancing House in Prague

Truth be told, if you’ve ever seen photos of the house on Instagram or online, then no doubt you’ll have noticed the tangled web of tram lines directly in front of the building’s exterior. You see, the house is actually on a very busy intersection, on the corner of a crossroads that encompass a bridge and several major roads.

As such, if you want to snap photos of the Dancing House, then you’ll need to time your visit well. Be sure to avoid rush hour (i.e. in the morning when everyone is en route to work, and again in the evening when they’re on their way back) and the weekends, when everyone is likely also trying to take some photos! The best lighting is to be found at the golden hour in the evening or, indeed, as early as sunrise.

If you’re looking to visit Prague for yourself, then be sure to take a look at some of our best Prague travel tips that are essential to know before visiting the Czech Republic!

Visit the interior of the Prague dancing house

If you want a peek inside, then it’s worth noting that only the top floor of the building is open to the public. Floor seven houses the Fred and Ginger Restaurant, one of the chicest restaurants that the capital city of Czechia has to offer. This space also happens to be home to a rooftop balcony, where you can buy tickets to view the city from above. Book viewing platform tickets here.

And you’ll certainly want to head to the bar (or just the viewing platform), because from here you can enjoy spectacular views of iconic Prague attractions such as the Charles Bridge and Prague Castle. Book your dinner reservation here.

If you’re looking for something a little lighter, then you can simply buy a drink, head out onto the balcony, and enjoy one of the best panoramic views the city has to offer.

Finally, for those who are seeking a little luxury while in the city, and for those who want a truly unique place to stay, the recently opened 21 room accommodation, the Prague Dancing House Hotel, offers all of the amenities you would expect of a four-star hotel. Free WiFi, bar, a good breakfast, fantastic ratings, and much more: find all the details- and extra photos- for the Prague Dancing House Hotel here! 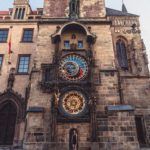 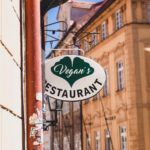 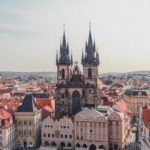 Where to Find the Best View in Prague: 10+ Epic Photo Spots 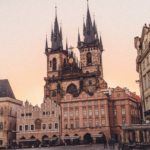