Here’s a one week in Northern Italy Travel Itinerary you’ll want to follow. Highlights include time in the beautiful cities of Bergamo and Turin, a visit to the most beautiful monastery in Europe and a glimpse of the most iconic cathedral in the world (seriously!)

Many visitors make the mistake of simply heading to the city of Milan and then calling it a day (or should that be long weekend?) However, this would be your first mistake! The North of Italy has so many beautiful destinations to discover that I highly recommend setting aside an entire week to truly enjoy its foodie scene and experience its cultural delights.

Alpine towns, great food, shimmering lakes, and plenty of UNESCO world heritage sites: the North of Italy has all the trappings of an Italian adventure and may well have it all if you’re after a European destination with oodles of history and great weather. Follow this Northern Italy itinerary if you’re looking for a taste of many of the best aspects of the European region…

How to get to Northern Italy

Due to its number of airports and position close to the border with other European countries such as France and Germany, it couldn’t be easier to reach Northern Italy, even if you just have time to explore over the course of a long weekend.

As well as train links from Nice and Bern (which both have their own international airports offering flights to the rest of Europe and beyond), Milan is probably going to be your port of call should you wish to fly to Italy directly. Milano actually has three airports, with one close to Bergamo, and the other two within closer reach of Milan itself.

Where to Stay in Bergamo | Relais San Lorenzo

The international airport of Bergamo is situated just twenty minutes from the city centre by bus, serves over one hundred destinations (including many major cities in Europe), and has plenty of affordable airline connections. As a result, if you’re flying to the North of Italy, then chances are you’ll be headed to Orio al Serio International Airport.

Although many people opt to skip the city of Bergamo in favour of more popular Italian destinations (a visit to Milan from Bergamo’s airport cost just €5 by bus), I highly recommend paying the town a visit and staying overnight if you can.

After all, missing this pretty city would be your first Italian mistake. That is, unless we’re talking about pronouncing words in the language. In which case, you’ll make plenty of mistakes as the week progresses!

Bergamo contains all the charm of an Italian town that time forgot with the modern comforts of good transportation, fine eating (and traditional Lombardy cuisine if you know where to look!) and a good range of accommodation to suit all budgets.

The town is split into two parts; the high town and low town. Each area has its own vibe, history, and range of things to do. Spend a night in Bergamo at the beginning and another at the end of your Italian adventure in order to truly make the most of this two-part city- you’ll thank me later!

Where to stay in Pavia | Le Stanze del Cardinale

An ancient university town on the banks of the Ticino River, the university city of Pavia was the capital of the Lombardy region for a brief period of time when Lombardy was once a kingdom in its own right.

As such, the town has welcomed countless iconic guests over the years and was even home to Albert Einstein for a short period of time. Highlights of Pavia include a Basilica that both Charlemagne and Barbarossa were coronated in and a perfect reconstruction of a medieval bridge that was sadly destroyed during the war.

The crowning jewel of Pavia is most certainly a Cathedral (known in Italian as duomo) that da Vinci himself had a hand in designing. The town was once called ‘the city of a hundred towers’ owing to an abundance of medieval towers dominating Pavia’s skyline.

Today, although just a handful remain, an idea of what the city looked like can be found in a beautiful medieval fresco on the walls of San Teodoro church. Pavia’s prestigious university is one of the oldest in Italy, second only to Bologna (the oldest university in Europe).

This means that the town’s population is very young due to a third of Pavia’s residents being students, and meaning that there are plenty of affordable eats in town for the discerning tourist!

Wander the ancient courtyards of this institution to step back in time and soak up the atmosphere. Nearby to Pavia (8km North if we’re being precise), you’ll find the Certosa di Pavia, thought by many to be the most beautiful example of Italian Renaissance architecture in the whole country!

Where to stay in Turin | Grand Hotel Sitea

Flanked on both sides by the mighty Alps, Turin is the capital of the Piedmont region of Italy and is definitely a highlight of this one week in Northern Italy Travel Itinerary. In fact, I’m pretty sure that it was my boyfriend’s favourite destination during our seven-day trip!

From almost all corners of the city, you can see the beautiful mountains rising up like giants, dominating the skyline. The sight definitely makes for a beautiful blend of landscape photo meets cityscape if you bring your camera along, and especially so if you’re an early riser and get up early enough to witness the sunrise.

Once a major political centre (people often call Turin ‘the cradle of Italian liberty’) highlights of this alpine city include world-class universities and a visit to the church which contains the Shroud of Turin.

The Turin Shroud is perhaps the most famous relic in Christianity and allegedly bears the outline of Jesus of Nazareth- a must-see for anyone interested in Ecclesiastical History.

Unfortunately, the Shroud is only on display to the public every decade or so for preservation purposes. And so what you see in Cathedral of Saint John the Baptist is actually a facsimile, but is still worth a visit in of itself.

Other points of interest include a visit to the Mole Antonelliana, Italy’s very own version of the ‘Eiffel Tower!’ and the city is often referred to as the foodie capital of Piedmont. As a result, you should definitely, try some chocolate, make sure to visit a few foodie cafés and sample some local cheese and butter during your visit!

Day 7: One night in Milan

Where to stay in Milan | Sina the Gray

Milan has the unfortunate reputation of completely underwhelming visitors to the city. And after a visit here, it’s not hard to see why. After all, the city of Milan does not have nearly half as many points of interest and interesting attractions as its nearby neighbours. Instead, it’s a busy, bustling modern city and the second largest city in the entire country.

With that being said, I do still recommend spending at least one night here, if only to check out the shopping districts (Milan is synonymous with haute couture and luxury shopping), the Duomo di Milano (thought by many to be the most beautiful cathedral in the world), Galleria Vittorio Emanuele II (a covered passageway that is well worth a wander inside) and a few other tourist hotspots (mainly in the form of universities and small churches).

Milan is also the perfect place to base yourself if you want to take day trips to smaller cities and towns in the region, as well as if you want to explore the Italian lakes for a day. After all, most major Northern Italian train lines run through here and there are plenty of exciting day trips from Milan to be taken.

If you have longer than a week in Northern Italy…

For those who are looking to spend 10 days in Northern Italy or just longer than 1 week in Northern Italy, there are plenty of extra wonderful places you can easily add to your European itinerary. One of the most beautiful places to visit is the area surrounding Lake Maggiore, which is home to stunning Renaissance towns and oodles of history.

For example, head to the North of Milan and Bergamo, and you’ll soon discover the land of the lakes. Lake Maggiore is particularly stunning and is characterised by its stunning towns, medieval history, and wonderful outdoor activities. 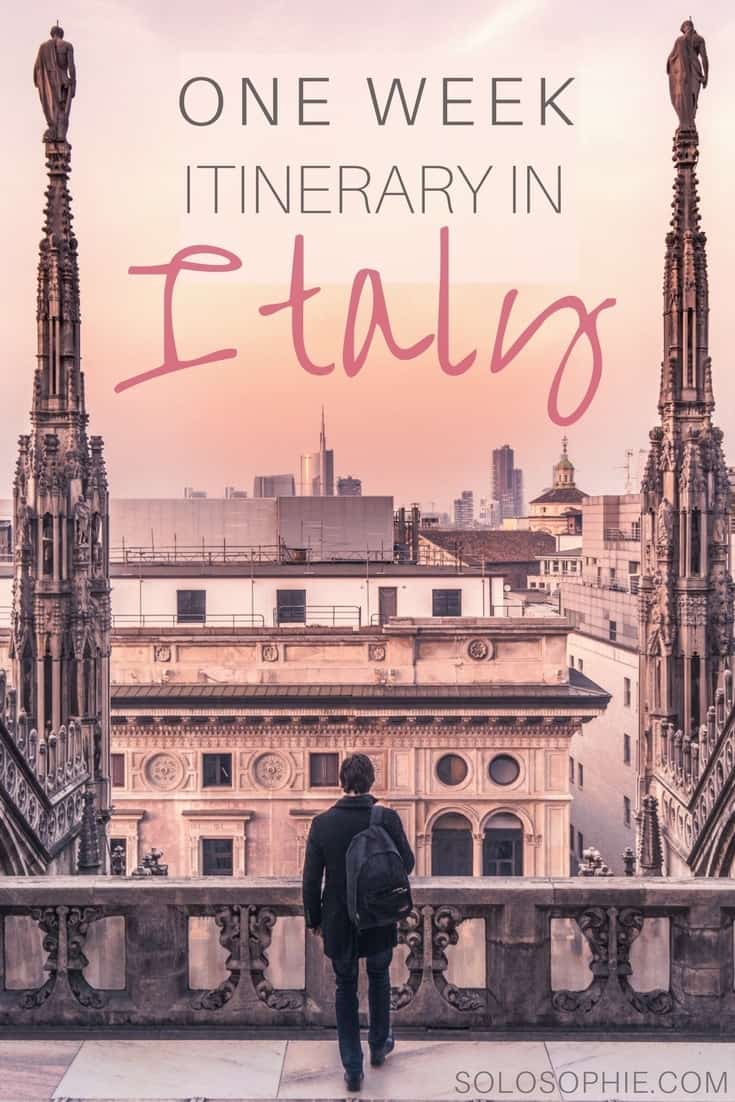 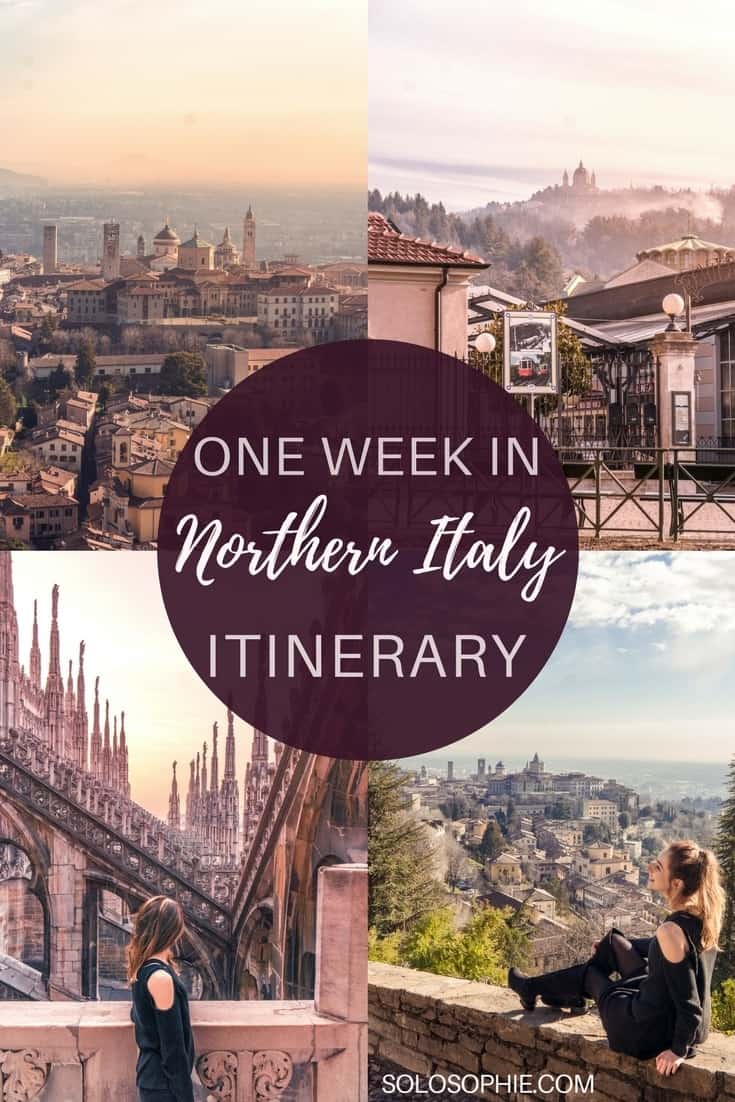 Sophie Nadeau loves dogs, books, travel, pizza, and history. A fan of all things France related, she runs solosophie.com when she’s not chasing after the next sunset shot or consuming something sweet. She now splits her time between London and Paris! Subscribe to Sophie’s YouTube Channel.

Reading this made me realize I need to get back to Italy asap!!

Beautiful pictures and great article- wish i had read this when we were in Milan!

I just love Italy! I feel like I could go to every little town in this country and fall in love! Thank you for sharing your experience and your gorgeous photos!

Great post and beautiful photos! Next time, don't miss the north-east part of Italy. My hometown is Verona, but I'm currently studying and living in Venice. Totally worth it! Oh, and have been visiting some other cities, such as Trieste (whose post is online in my blog) and Cividale del Friuli. I, as Italian, had heard very little about the last one, but really loved it! :)