Boats sway gently in the salty sea breeze and seagulls flock overhead. Located in the very South of the Cornwall peninsula, in a place where sea meets land and the settlement remains steeped in history, Mousehole is a beautiful little village worthy of a venture through. Here’s a quick guide to the best things to do in Mousehole, as well as travel tips and things to know before visiting!

A brief history of Mousehole

Somewhere between Penzance and Land’s End, the sleepy village of Mousehole lies on the edge of Mount’s Bay and has been inhabited for centuries. Mousehole (which is actually pronounced ‘mausel’) is built of predominantly traditional Cornish architecture; all granite façades and slate roof cottages.

Right up until the 16th-century, Mousehole was one of the main ports of this part of Cornwall, and as such, gained plenty of wealth and prestige. During the Middle Ages, this fishing town was well-known for its abundance of fairs, markets, and festivals.

There was even a specific market on Tuesdays which was included in a medieval charter. During the 1595 raid on Mount’s Bay by the Spanish, notably by Carlos de Amequista, the town was almost entirely burned to the ground.

The only attested surviving building was at the time known as the Keigwin Arms and is now a private home. This medieval-looking building is located literally a two-minute walk from the car park and is well worth a wander past on a trip to the town.

The last fluent native speaker of the Cornish language (though I’m not sure how they managed to accurately measure this metric) allegedly lived in Mousehole during the 18th-century and was named Dolly Pentreath. Baptised in 1692 (though it’s unclear as to what date she was actually born), she is the last recorded Cornish language speaker.

In 1930, Dylan Thomas described Mousehole as ‘the loveliest village in England,’ and it’s fair to say that not much has changed in the Cornish settlement since the Welsh writer and poet first declared it all those decades ago.

Today, Mousehole sits within one Cornwall Area of Outstanding Natural Beauty, meaning that it is quite literally classified as a stunningly beautiful site. This also means that you should bring your camera equipment along on any trip to the sleepy fishing town. You’ll obviously want to snap a photo or two!

Things to do in Mousehole

The sandy strip that makes the beach of this fishing town is unusual in that it sits right inside the harbour, just a short swim away from where the boats sway in the gentle sea breeze.

Located right by the fishing village’s main car park, pack your swim stuff, a great book, and a picnic and prepare to relax for a couple of hours alongside the crystal clear waters of this Cornish beach.

Wander around the streets of Mousehole

Of course, one of the main attractions of this quiet fishing community are the small streets and laid back ambience which permeates the village. You could easily spend several hours getting lost in the many galleries and small independent shops which populate the place, snapping photos and seeing what Mousehole has to offer (as well as purchasing a souvenir or two).

Walk along the harbour walls, take in the sea views, and enjoy spectacular views of Mount’s Bay. During the colder months of the year, the famous Christmas lights are erected and people come from all over the place just to see the twinkling bulbs.

What started off as a simple string of lights hung to add some winter cheer by a local artist over fifty years ago has since become an annual tradition. One of the best things to do in winter in Cornwall is to wait until the sun has gone down before heading to Mousehole.

Once there, between the end of November and the beginning of January each year, you’ll soon discover that the Mousehole Harbour Lights are fun for all the family. During this period, the harbour is lit by the twinkling lights of ten thousand light bulbs, while all the eateries are open to frequent.

Where to eat in Mousehole

The South West of England is well-known for its locally produced cuisine and traditional fare. And the quirky cafes and coffee shops of this pretty fishing port are no exception. So whether you want to try a local crab sandwich, or simply wish to sample a local tipple, here are the best places to eat in Mousehole:

With sea views and plenty of locally sourced cuisine, this well-reviewed hotel and restaurant have all sorts of offerings, including a full Sunday roast at the weekend.

Aside from having a pun-filled name, Hole Foods is easily one of my favourite cafés in the village. With harbour views and friendly staff, head here and you can also expect to find the best hot chocolates in Mousehole (they even have veggie marshmallows!)

On the harbour front, overlooking the fishing boats, 2 For Street offers French food set against the backdrop of modern, chic and minimal decor.

Perfect for a late breakfast or early lunch, Rock Pool is situated in the heart of the historic fishing town and is pretty reasonably priced (though it’s worth noting that all of the restaurants here are a little more expensive than what you can expect to pay further inland).

Where to stay in Mousehole

From luxurious apartments to rustic Bed and Breakfasts, there’s plenty of accommodation options when it comes to this quaint fishing town. So, if you’re wanting to explore the Southern Coast of Cornwall (and I highly recommend you do with a car in tow), then Mousehole makes for the perfect base from which to explore the area.

If you’re looking for a home away from home and a chance to experience the town at a more local level, then Mural Cottage offers several rooms with free WiFi and a fully equipped kitchen. Check prices and availability here.

This luxury property offers self-catering accommodation minutes from the beach (you’ll need a car should you opt to stay here). Situated at Lamorna, this well-rated property even offers some rooms with balconies. Check prices and availability here.

Tips for visiting Mousehole and the best time to go

Like much of the South Cornish coast, Mousehole attracts plenty of visitors on an annual basis. This is especially true in the summer months when roads become increasingly difficult to navigate due to the sheer volume of traffic. As such, I highly recommend visiting the fishing town in the European shoulder seasons (i.e. just before or just after summer).

Once in town, there’s a small car park located just above the beach, as well as further parking spaces higher up the hill. If you want to ensure you’ll get a space, be sure to arrive earlier in the day as the car park is limited and fills up fast. And, of course, if you’re planning an off-season break to Cornwall, be sure to enjoy the glittering Mousehole Harbour lights come wintertime!

If you’re planning on walking during your trip to Cornwall, you should know that the South West coastal path is the longest trail in England and follows the coastline around the entirety of Cornwall. Bodmin Moor is the main moor in Cornwall, and while beautiful, it can require plenty of walking in certain areas.

It can be hard to hike in places and so good walking shoes like these ones are an absolute must. Whatever the time of the year that you’re visiting Cornwall, rain is always a possibility and so it’s important to be prepared for showers (even during the summer) with a good waterproof coat like this one.

Nearby things to do close to Mousehole

This stone circle of the Merry Maidens dates back to Late Neolithic Times and is also often referred to as ‘Dawn’s Men’. Situated in an unassuming field to the side of a main road, legend tells that these rocks were once maidens who danced on a Sunday.

The well-preserved and tiny traditional fishing cove of Penberth remains frozen in time. Located less than a ten-minute drive from Mousehole, there is little by way of attractions once you reach Penberth. Instead, there are several beautiful coastal walks, a rugged coastline, and plenty of pretty stone cottages to admire.

This pretty church is tucked away in the hills to the back of Porthchapel beach. Dating all the way back to medieval times, much of what you see of the ecclesiastical building today was constructed during the 12th and 15th-centuries.

The conically shaped tidal island of Mont Saint Michel is famous the world over. St Michael’s Mount is the younger sibling of the French monument and was even constructed by the same order of Monks.

St Michael’s Mount is a conical island which boasts a church, small village, and harbour. The beautiful isle is also home to tropical gardens, as well as centuries worth of human history.

Enjoyed reading about the best things to do in the fishing town of Mousehole? Pin it now, read it again later: 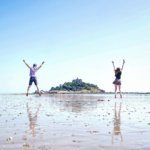 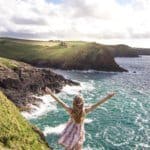 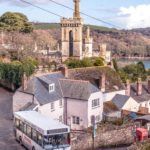 A Quick Guide to the Very Best Things to do in Fowey, Southern Cornwall 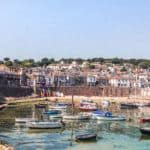