One of the best parts of learning a new language is all of the interesting, unique, quirky and downright weird vocabulary that comes along with it! When it comes to German, there are plenty of magical German travel words that simply don’t exist in the English language (although obviously, we’re all wishing they did!) 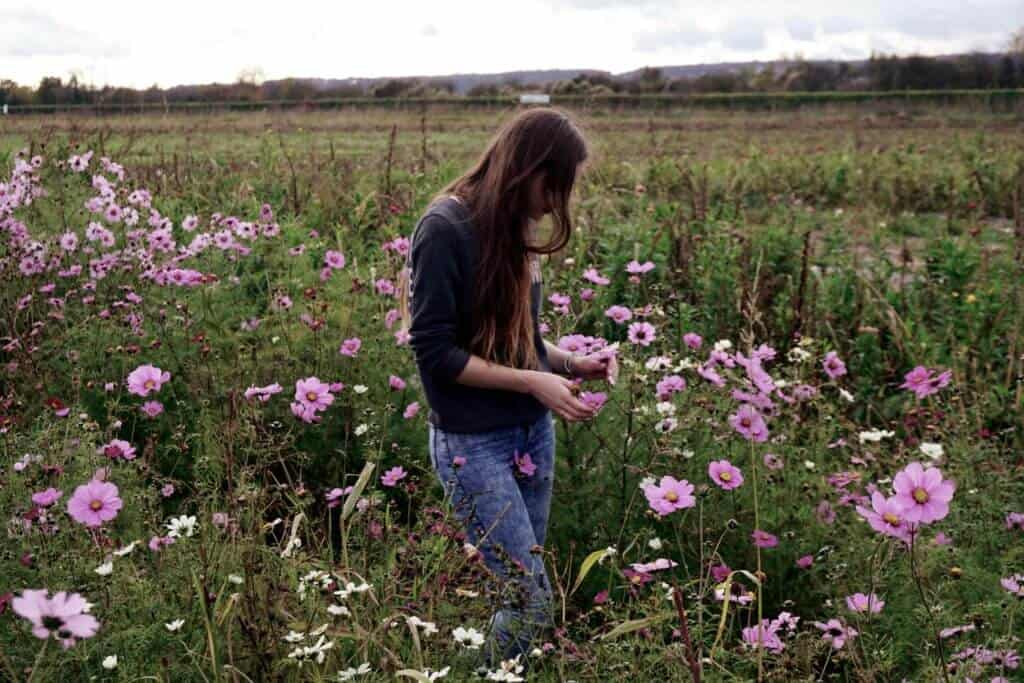 I was raised in a bilingual household and have been learning new languages since before I even understood the concept of ‘language’. And one language that has always fascinated me is… German. A pretty logical language, it’s full of compound words. Oh, and a quick note on German nouns: they always start with a capital letter- just a word of warning before you start thinking I was a little over-enthusiastic on the grammar front today… 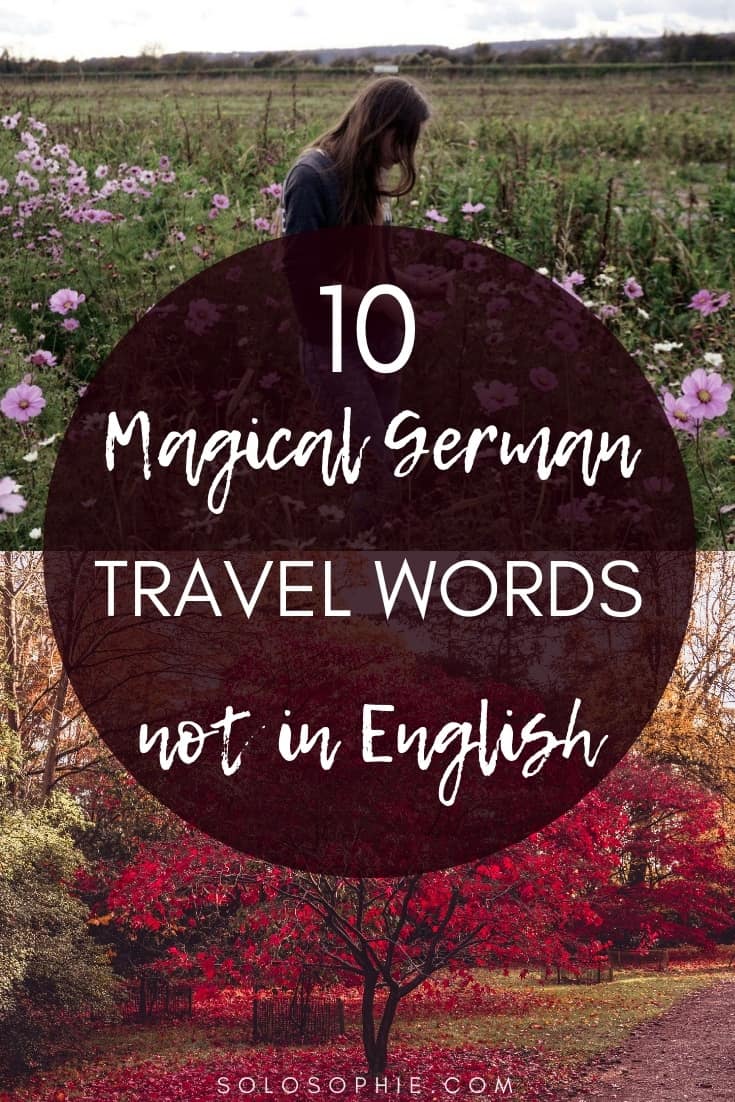 German Travel Words You’ll Wish We Had in English!

Although there’s no direct translation for ‘Fernweh’ in the English language, the literal translation is ‘far-sickness’- it’s one of those compound words I was talking about! You know those feelings of itchy feet, opening up every travel deal that finds its way into your email inbox and daydreaming a little too much about your next adventure during your coffee break? Well, the word ‘Fernweh’ sums up all these feelings and more.

If you were to translate Fernweh into English, then its equivalent would be ‘wanderlust’. Ironically, Wanderlust is a loan word from German which came to have a different meaning in English. The word was originally a German verb ‘Wandern’ (‘to hike’) and still means this in German to this day. 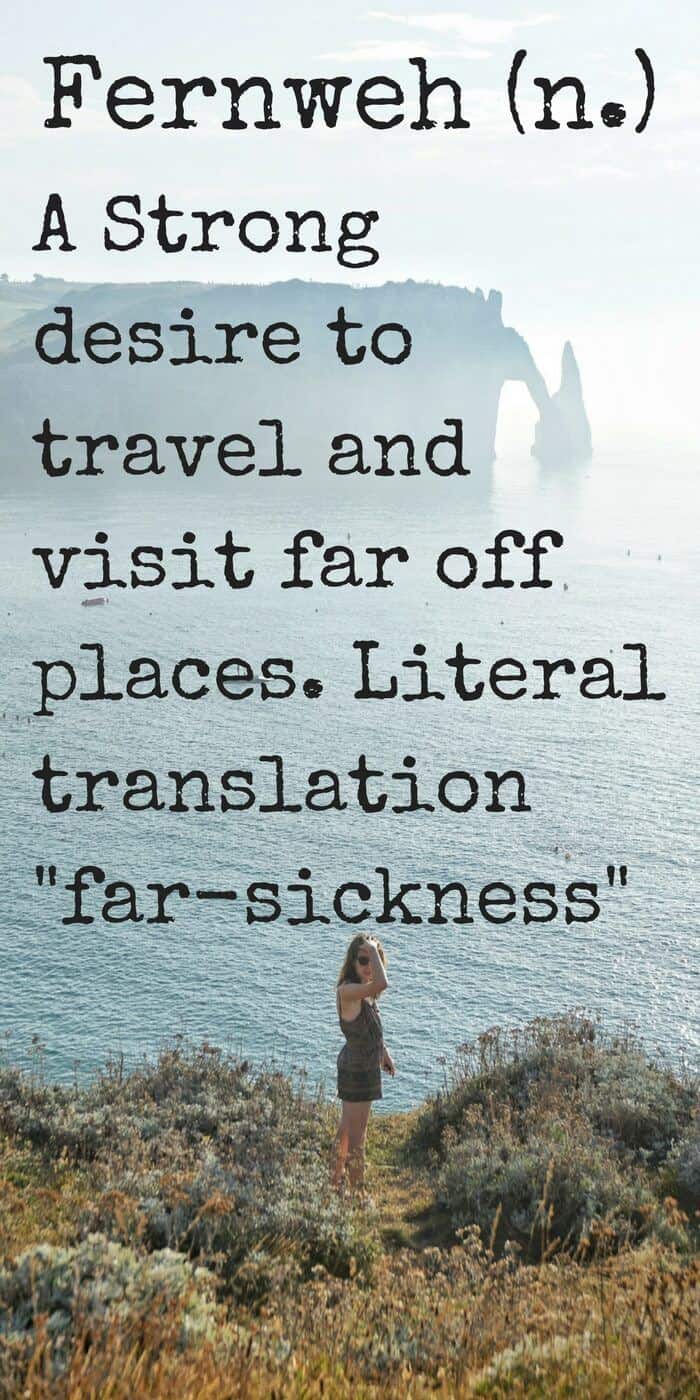 Although this word is often translated as simply ‘cozy,’ the word conveys so much more than this, and would be immediately obvious to any German speaker. Gemütlichkeit is all about achieving the perfect balance between cozy, warm and comfortable.

When I checked the dictionary definition, it simply returned ‘friendliness or geniality’. However, a little further research revealed that Gemütlichkeit is just one of those words which you wish we had in English… but don’t! If you’ve heard anything about the Danish concept of Hygge recently, then you can think of this as the German equivalent…

I absolutely love this word, it’s such a fun word to say! Don’t believe me? Try saying ‘Kopfkino’ out loud five times, really quickly. This is yet another of those words where there’s no real translation! If you were to transliterate it, you would literally get ‘head cinema’.

And if you hadn’t guessed yet, this word is for those situations where you play out how you imagine a scenario would go in your head. I like to think of this word as all those times I’m in the library (and meant to be studying), but find myself staring aimlessly out the window and dreaming of finding medieval France, or reading more about the Original Arc de Triomphe in Provence! 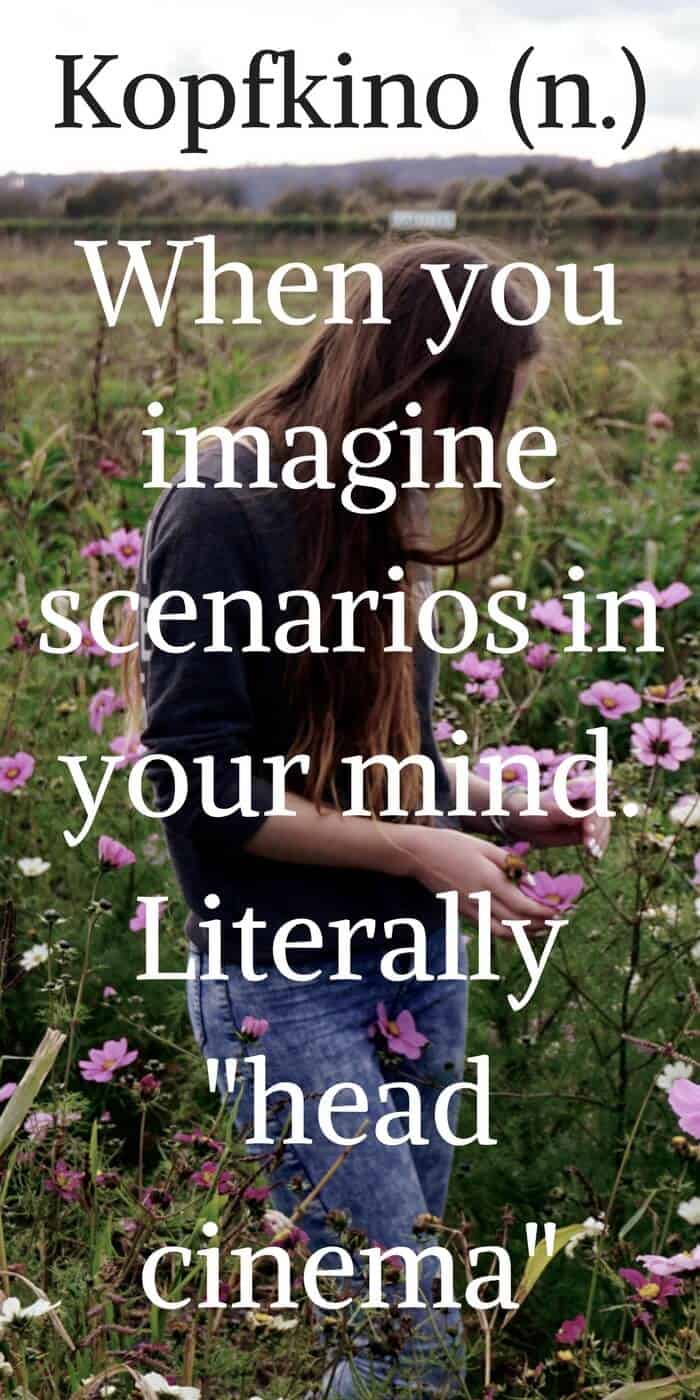 The German word Luftschloss is literally translated as an ‘air castle’ and is all about the unrealistic dreams you might have. A more idiomatic English translation would be ‘a pipe dream’. Although I guess this word has kind of negative connotations, I like to think that many unrealistic dreams, are actually achievable if you plan them right… 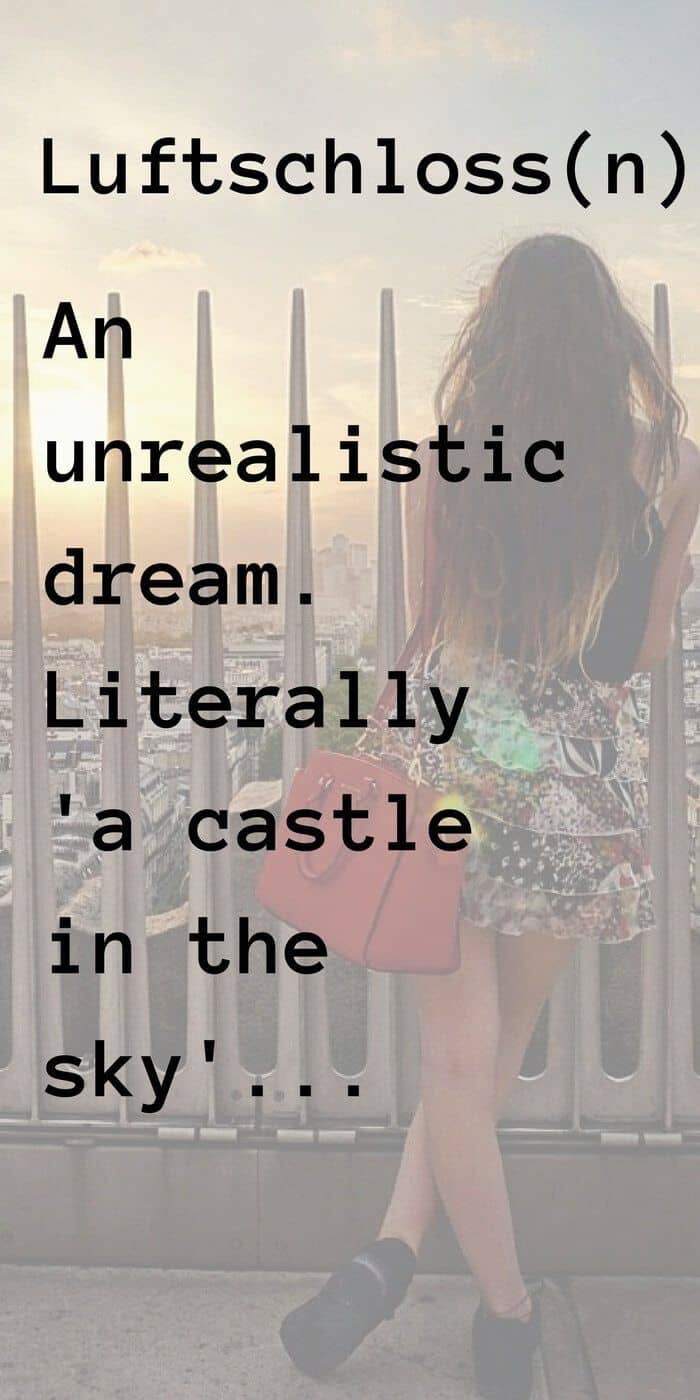 Okay, so funny story: when I searched for the English translation of ‘Sehnsucht‘, the dictionary only returned around 500 different possibilities! Yep, this is definitely an untranslatable German word.

The compound words of ‘Sehn’ and ‘Sucht’ are literally translated as something along the lines of ‘seeing addiction’. Sehnsucht is basically an indescribable yearning for far off places and indescribable goals. It can be translated as longing, yearning, craving, pining, etc.

CS Lewis, the author of the Narnia books had something interesting to say about this quirky German word; “That unnameable something, desire for which pierces us like a rapier at the smell of bonfire, the sound of wild ducks flying overhead, the title of The Well at the World’s End, the opening lines of “Kubla Khan”, the morning cobwebs in late summer, or the noise of falling waves.” Perhaps the best way to sum up this word is to describe it as future thinking nostalgia… 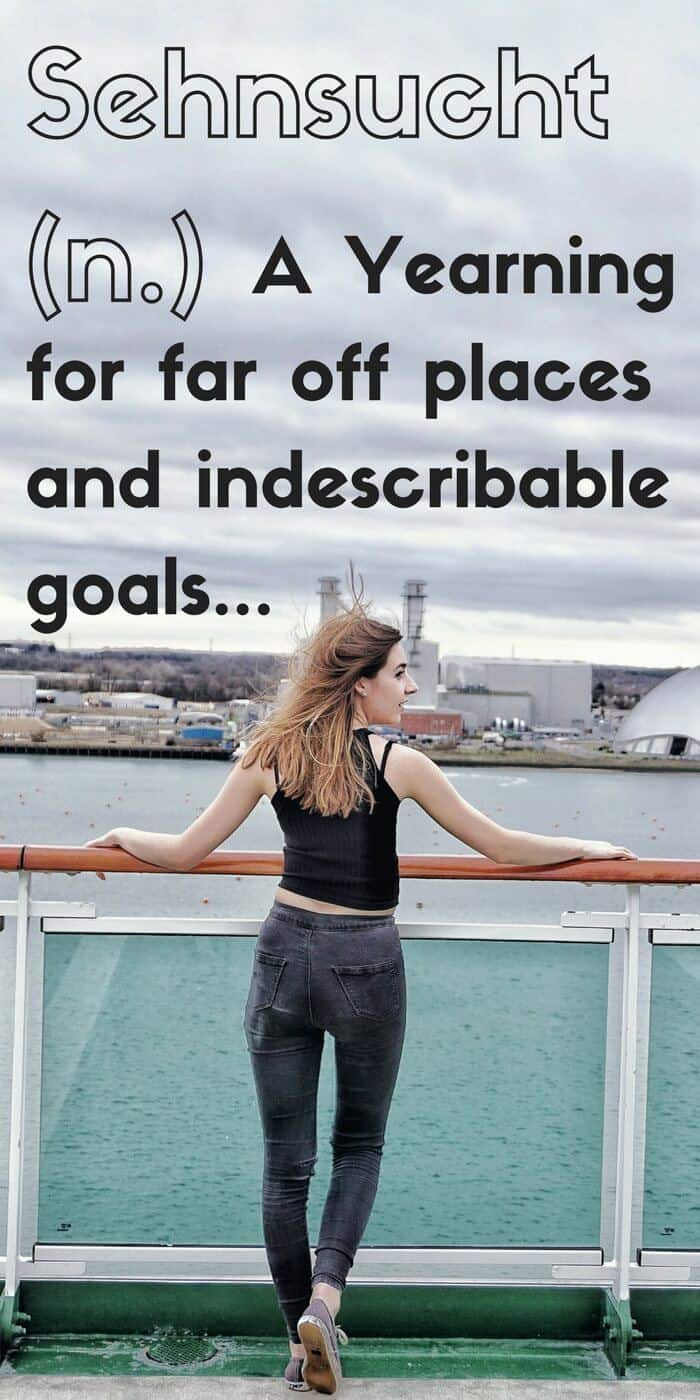 Although not strictly travel related, the German word Sprachgefühl is for describing those people who just have a real talent for learning new languages! You know that girl in your Spanish class at school who could look at the vocabulary once and then memorize it? Or that guy in French who could just imitate the Parisian accent perfectly?

Well, Sprachgefühl is my new favourite word for describing these people! I’ve decided to add it to the list of German travel words you should know about because speaking languages other than you is a big part of seeing the world!

Sadly, I am not one of these people, blessed with the art of ‘Sprachgefül‘. Luckily, I had picked up a number of tips and tricks to learning a new language during the past few years, though…

Now, this is one of those perfect German travel words to describe how I feel about my life right now! Torschlusspanik is a German word meaning something along the lines of ‘fear that time is running out to achieve your goals’. Literally translated as ‘gate-closing panic,’ this can also be that feeling you get when you’re near the end of an essay deadline and have barely even opened a book! 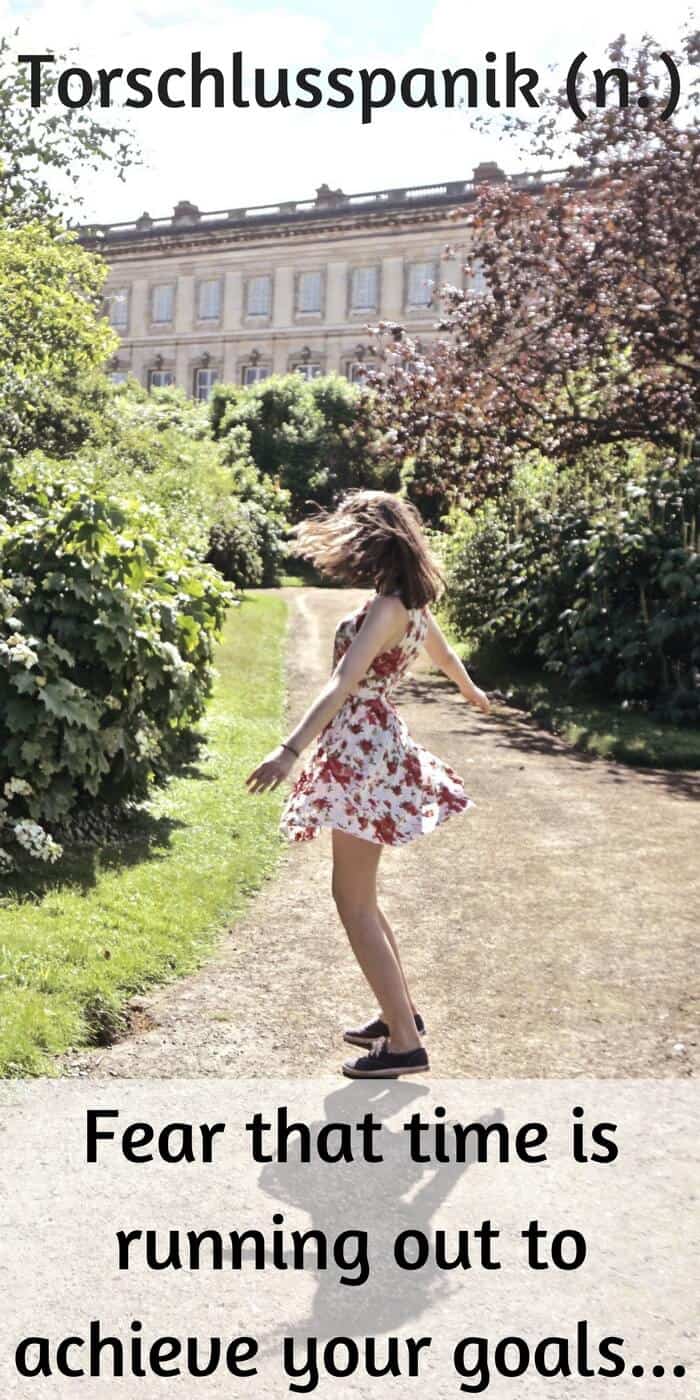 Waldeinsamkeit is yet another compound words from ‘Wald’ meaning wood and Einsamkeit meaning alone. Therefore, it literally meant the feeling of being alone in a forest. You know those times where you just stop and think to yourself how beautiful the world around you is? Well, now you have a new word for that indescribable feeling! 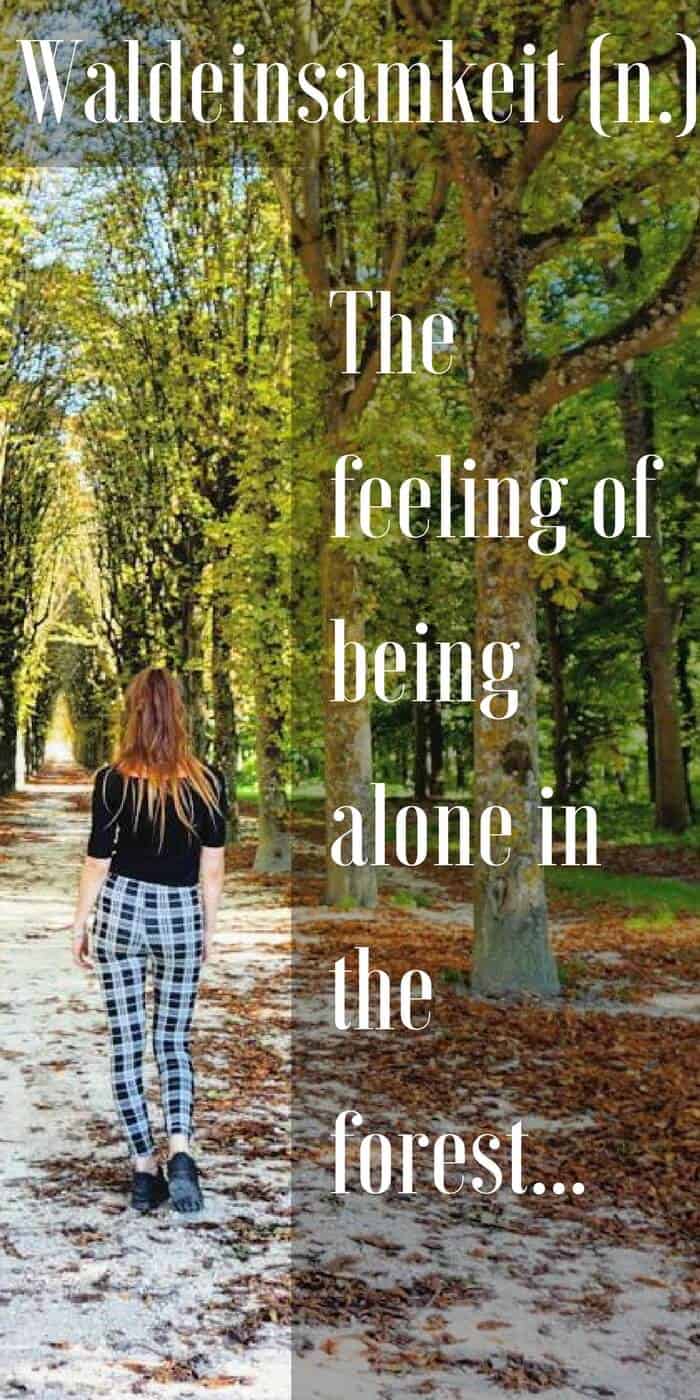 Travel doesn’t necessarily have to be geographical, but can also be a journey through time itself. Zeitgeist is when you capture the feeling of a certain era or decade. Zeitgeist is all about capturing the vibe of a specific moment in time…

Know of any unusual or magical German travel words that you can’t quite translate into English (or any other language!) Let me know in the comments below!

Enjoyed reading this guide to the best German travel words you’ll wish we had in English? Pin this article now, read it again later: 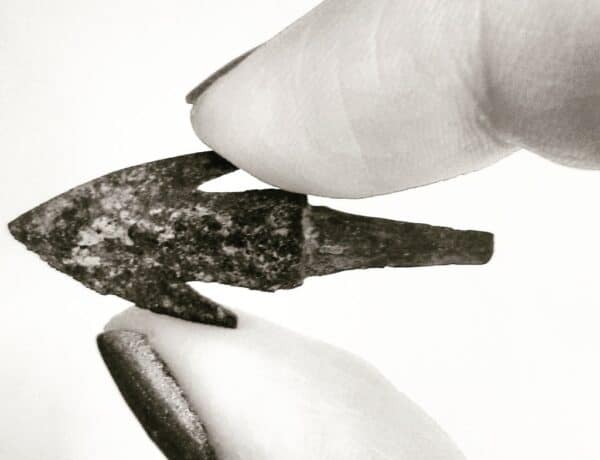 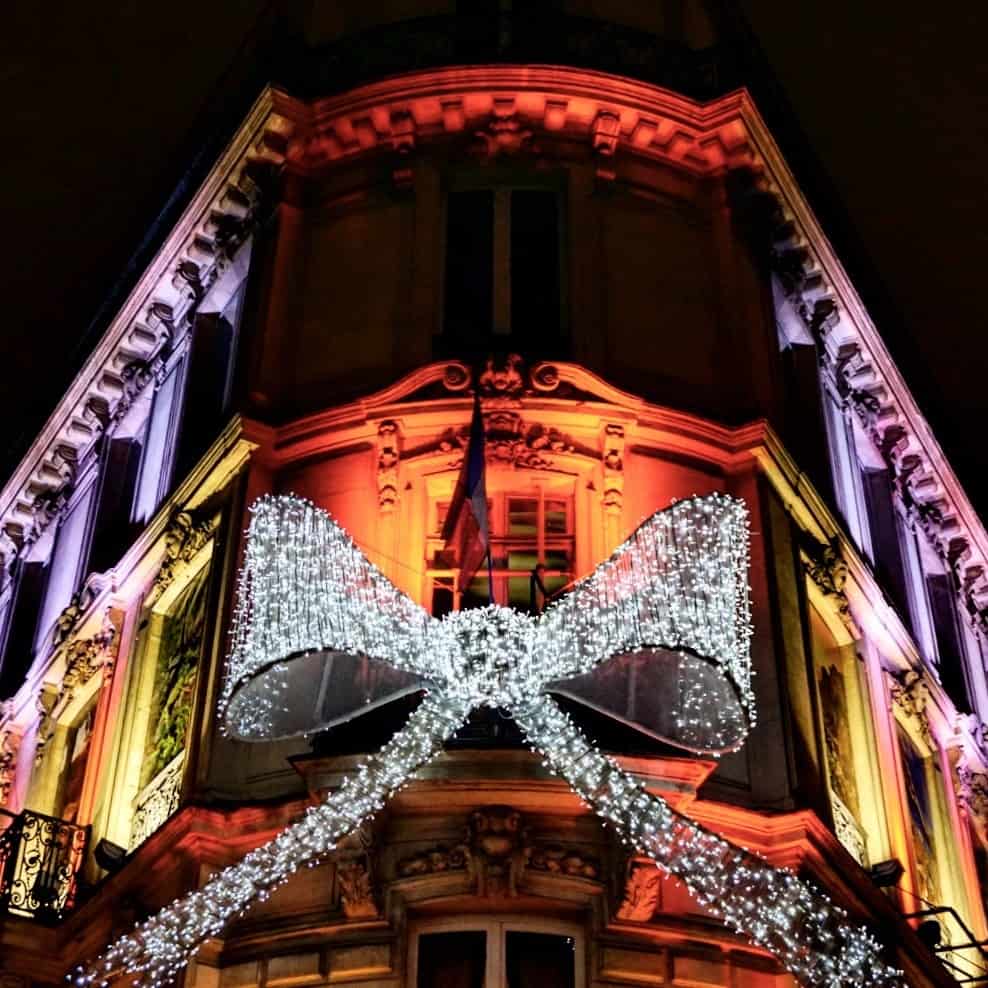