Dublin is a bustling and busy European capital with plenty of things to do and even more to see. Best known for its traditional pubs, breathtakingly beautiful libraries, and live music scene, here’s a quick guide to 12 of the best Dublin attractions you simply must see on any trip to the Irish capital!

So-called because once upon a time one was required to pay half a penny to cross the murky waters of the River Liffey, the pedestrianised Ha’penny bridge was constructed in May 1816.

The cast iron bridge was created in Shropshire, England and you’ll likely cross the structure a number of times during your stay in Dublin. If you want to see more historic sites across the city, then here’s a completely free and self-guided tour of Dublin!

Temple Bar is not only the name of an iconic pub in the heart of Dublin but also of a busy district which is popular with tourists and locals alike. During our time in the Irish capital, we actually stayed in this area and found it a great place from which to explore the rest of the city.

The pub, Temple Bar itself, has been welcoming guests for over a hundred and sixty years and so you can’t leave the city without snapping a photo of its most famous drinking establishment (or better still, heading inside to enjoy a traditional pint)!

If you want to snap a photo of the pub, then I recommend heading there after the sun has gone so you can capture the hundreds of glittering lights across the façade of the bar.

#3 Trinity College & The Book of Kells

Trinity College is a university founded by Elizabeth I in the 16th-century. Today, the seat of learning is home to some of the most beautiful architecture in Dublin, as well as one of the most important medieval written works in the world, the Book of Kells.

Although it’s a little pricey to enter, at almost €15 per adult, and over €10 even for students, if you buy one museum entrance while in Dublin, make it a trip inside Trinity College Library and the Book of Kells exhibition! If you’re planning on visiting both the Book of Kells and Dublin Castle, then it might be worth purchasing a tour ticket which allows for fast-track entrance to see the medieval book.

Ireland’s oldest pub can be found in the form of the Brazen Head, situated just mere metres away from the River Liffey. So, if there’s one thing you make it your mission to do while in Dublin, head to the Brazen Head for a glimpse of a drinking establishment dating all the way back to the 12th-century.

First established in 1198, food is reasonably priced, as are the drinks, and live music is often playing all night long! The bar has a large selection of locally brewed beers and ales, and of course, a Pint of Guinness never goes amiss! Nearby, you can stroll along the River Liffey and watch the world go by.

The world-famous story behind the pint of Guinness began right here in Dublin. The Guinness Storehouse is an interactive museum where you can learn all about the history of the beer, as well as the story of its founder, Arthur Guinness (a philosopher and philanthropist who opened the ever-popular St Stephen’s Green in the 19th-century).

Once there, you have to see some of the quirky advertising campaigns Guinness has run over the years and you simply must head to the Gravity Bar on the very top floor of the building in order to take that photo!

Plus, this museum and experience isn’t all about tasting the alcohol- I still had plenty of fun despite not being able to drink any beer as a result of being on antibiotics!

And after all, a million visitors a year can’t be wrong! So take yourself on a guided tour of the Storehouse and enjoy a free pint included with your ticket. In total, it takes at least two hours to experience the Storehouse, meaning that this makes for a great afternoon out.

Not far from Dublin Castle, and just a little way from one of Dublin’s main thoroughfares, you’ll find a slightly larger than life-sized statue dedicated to Molly Malone. If you’re wondering just who she was, Molly Malone never actually existed! Instead, she’s the character of a popular song which has since become a symbol of the city.

For one of the most impressive art collections to be found anywhere in Ireland, you simply must head to the National Gallery, whose permanent collections are free to visit. Elsewhere in the city, the National Museum of the city can be found in three locations, each dedicated to a particular speciality.

There’s a Museum of Decorative Arts housed in a former army barrack, a Museum of Archaeology where you can see some of Ireland’s most famous bog bodies, and a Natural History Museum set against a backdrop of breathtakingly beautiful Victorian architecture.

Perfect for picnics and filled with spring blossom during the earlier months of the year, St Stephen’s Green is surrounded by museums and is home to plenty of beautiful plants.

Best visited on a sunny day, the nearby secret spot of Marsh’s Library is also well worth a visit. If you’re visiting in spring, then be sure to head to St Stephen’s Green to spot the best cherry blossoms in Dublin!

There has been a place of worship in some form or another where Christchurch Cathedral now stands for well over a thousand years, perhaps even earlier. The church you see today was first founded in 1028 and is characterised by its beautiful vaulted ceilings and ancient crypt which houses Ireland’s first copy of the Magna Carta.

Of all the must-see Dublin attractions in this article, Dublin Castle is one of those places which you literally can’t miss (it’s just that enormous!) Visible from almost any corner of the city, those who are familiar with the rolling green hills of the Emerald Isle will likely already know that the land is home to countless castles. Now a conference centre and a popular venue for wedding receptions, some of the castle is still open to the public for a fee.

Flowing through the very heart of Dublin, the River Liffey is not so much one of the Dublin attractions but more of a hard-to-miss geographical feature. If you want to see as much of the city as possible, then chances are you’ll be passing over this bridge at least several times during your stay in the Irish capital.

Wander down alongside the River Liffey and you’ll also walk close by to some of the best secret spots in Dublin, including the Leprachaun Museum (dedicated to all things folklore and Irish legend related), as well as St Michan’s Church (home to 17th-19th century naturally preserved crypt mummies).

Of all the Dublin attractions listed in this article, Dublin’s other castle is situated furthest from the city centre. However, once you’re there it soon becomes apparent that the extra travel time on the bus is well worth the wait.

After all, parts of the castle date all the way back to the 12th-century, meaning that this stunning medieval castle is the perfect place to learn all about the history of Dublin.

Enjoyed reading about some of the must-see Dublin attractions you won’t want to miss on a trip to the city? Pin it now, read it again later: 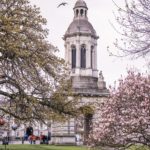 Where to Find Magnolia Trees, Spring Flowers, and Cherry blossom in Dublin 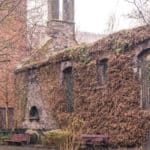 The Haunting Ruins of St Kevin’s, Camden Row: A Former Medieval Church in the Heart of Dublin 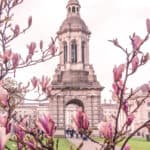 Dublin Travel Tips You Need to Know Before Visiting 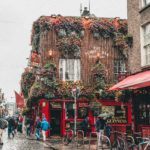 How to Spend a Rainy Day in Dublin (and still have fun!)
9467 shares
Click here to cancel reply.

The Travel Blogger's Guide to Ireland | The Travel Hack