Very few places in the world boast the title of ‘likely influenced by Leonardo da Vinci himself‘. And yet, this is exactly the case should you opt to visit Chateau de Chambord, a palatial sized castle of over four hundred rooms in the very heart of the Loire Valley. First constructed during the 16th-century, of all the French Châteaux in Northern France, Chambord is the largest and most imposing… 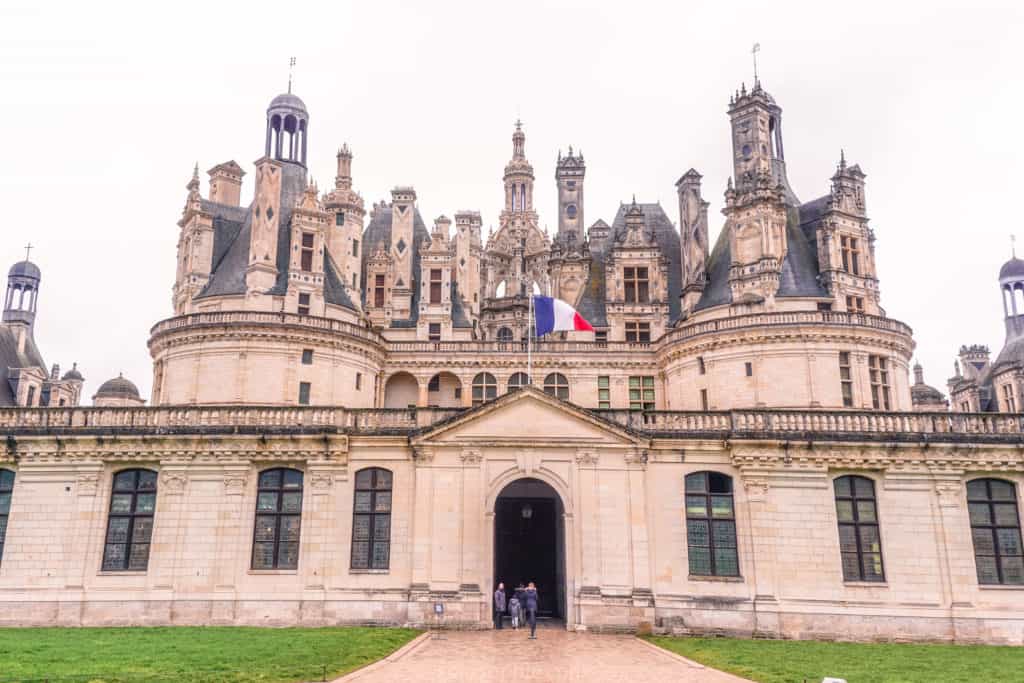 First constructed as a hunting lodge during the 16th-century, Château de Chambord is a beautiful blend of Renaissance French architecture meets traditionally medieval styles. You see, 16th-century architecture marked a new style for design in France. Defences were no longer required in the same ways in which they had been in the past, and ornamental gardens were beginning to become popular.

In Chambord, the moat is only partial and was purely constructed for decorative purposes. The same can be said of the castle’s countless towers and turrets. Commissioned by Francis I of France, the King also maintained two other Royal Residences nearby in the form of Amboise and Château de Blois. Today, both of these castles can also be visited on a trip to the Loire Valley. 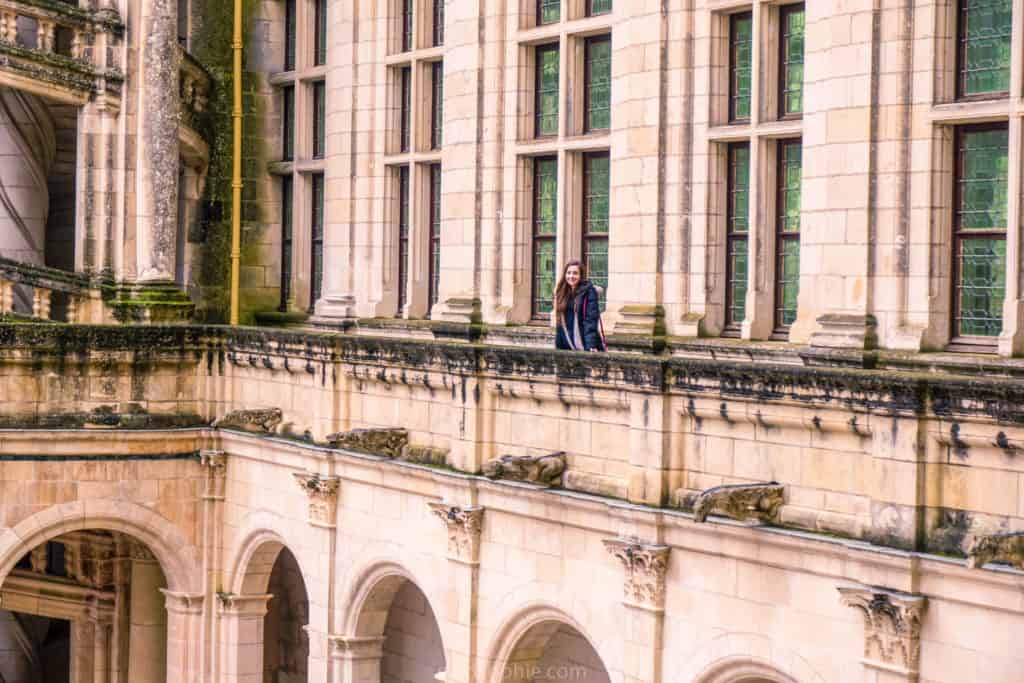 Although the official line was that this castle was intended for hunting purposes, construction was fraught with controversy from the outset. Although the château was threatened by bankruptcy during construction, the King instead stole funds from the church to continue funding his vanity project. So vast was the castle, that Francois 1’s sister used to complain that she would always get lost within its walls.

Despite spending decades funding the castle, the sheer volume of architectural styles, not to mention a skyline which resembles more a city than a castle meant that Francis only ever spent a couple of months of his thirty plus years as King here. His original intention was to utilise the castle as a way of showing off his wealth and power.

Indeed, when Chambord was near completion, Francis I invited one of his greatest power rivals, Emperor Charles V to admire his new creation. Instead, over the years, Chambord became something of an embarrassment to the King and it was never truly completed. Francis I sadly before his true Château dream was fulfilled. Some say he died of syphilis, while others claim it was from some kind of urinary infection. 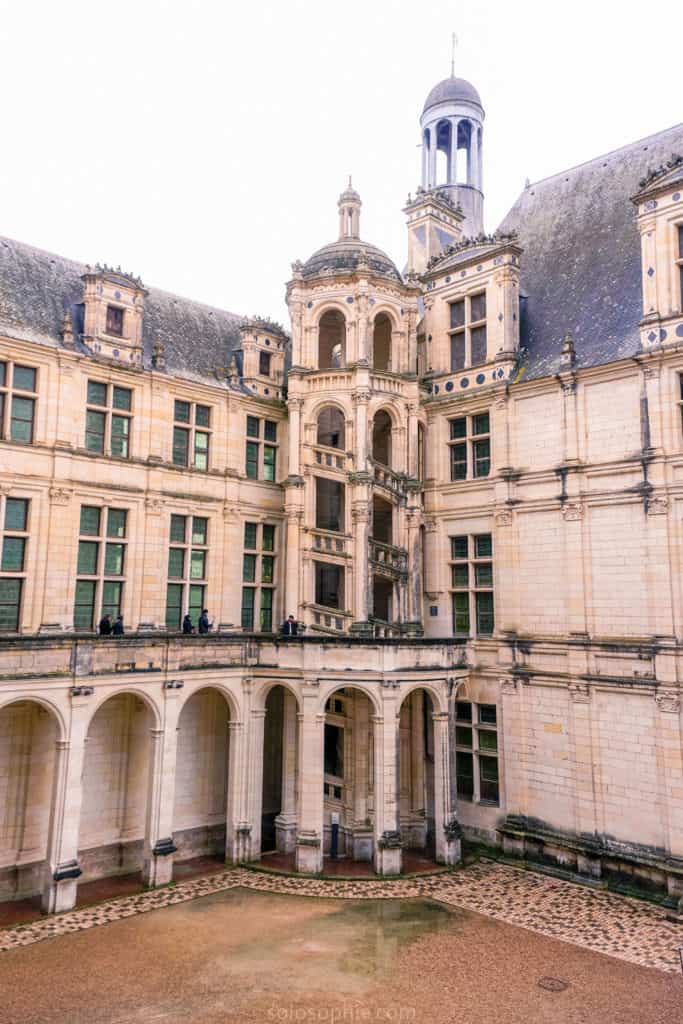 Following the French Revolution during the late 1700s, most of the furniture which adorned the hundreds of rooms was sold, while the majority of timber throughout the property was stripped and sold. This means that when you visit the castle today, few furnishings adorn the floors, walls, or ceilings.

For a period of time, Chambord was even abandoned, further damaging what little had been left following the French Revolution. During WWII, priceless artworks from both the Louvre and the Château at Compiegne were housed during Chambord for their protection.

Although the castle today boasts over four hundred rooms, it’s interesting to note that the palatial structure was never actually completed. Now, Chateau de Chambord welcomes hundreds of thousands of visitors from across the world, all hoping to catch a glimpse of the grandeur of one of the most famous castles in Europe. 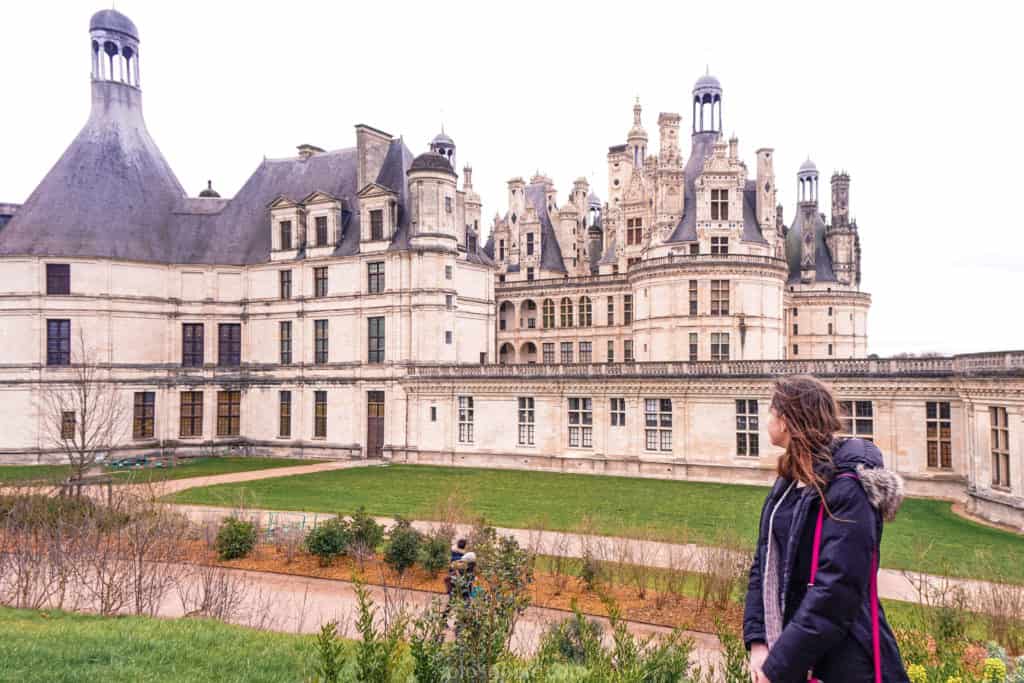 The Da Vinci link and the Loire Valley

For fans of all things Italianate, it may interest you to know that Leonardo da Vinci actually resided in the Loire Valley for a short while. Though there is no definitive link between Da Vinci and Chambord, it’s thought that many of the architectural elements to be found inside the structure were inspired by the Grand Master himself.

For example, the double helix staircase in the heart of the château (neither staircase of which touches the other) and the double pit evacuation system are just two examples which were clearly taken directly from the ideas of Da Vinci. Whether or not Da Vinci truly was involved in the construction of Chambord, one thing is clear: the castle is impressive and remains one of the most beautiful examples of Renaissance architecture in France.

If you want to see some real-life Da Vinci creations in France, then head to the Louvre to see the Mona Lisa, or Château du Clos Lucé, Da Vinci’s official residence in France. 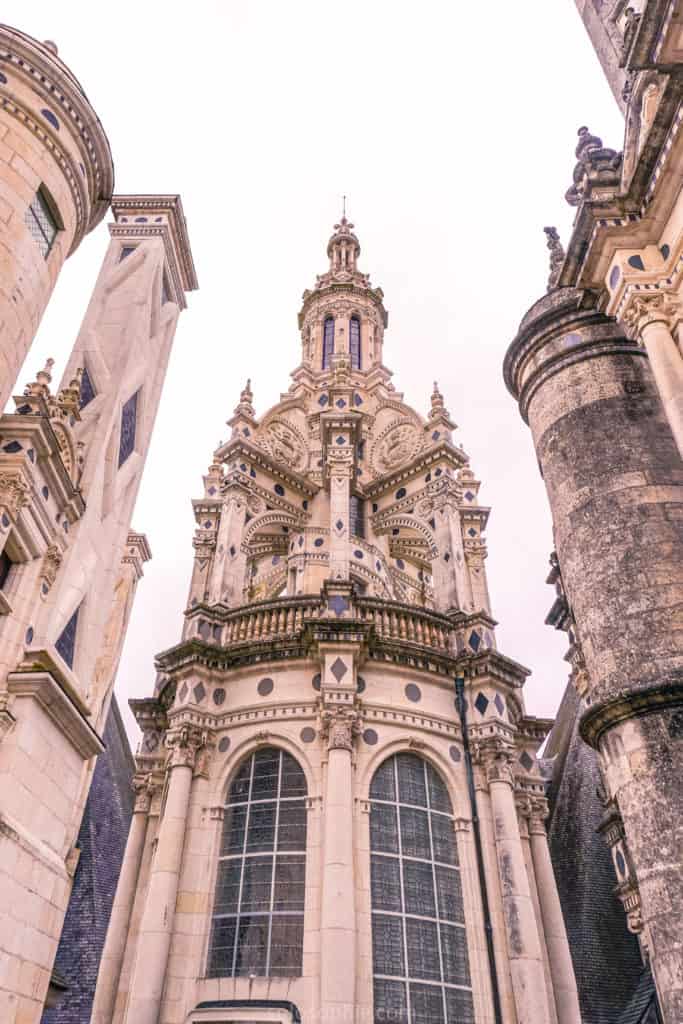 Highlights of the Chambord Castle

Double helix staircase: If there’s one thing you make it your mission to see while in the castle, make it the twin staircases which intertwine (but never actually touch) on their way through the core of the castle and all the way onto the rooftop terrace.

French formal gardens: For a true glimpse of how the Château would have looked during its heyday in the 16th-century, you need only wander into the castle’s gardens. Complete with perfectly manicured gardens and a partial moat, dedicate at least a couple of hours of your trip to truly soak it all in!

Cityscape rooftop: Hope for sunny weather when you opt to visit Chambord because you’ll want to venture up onto the castle’s expansive rooftop. For, the eclectic mix of architectural styles which make up Chambord truly become apparent when you wander across the terrace. Climb to the top and you’ll also be rewarded with breathtaking views over the surrounding Loire Valley landscape. 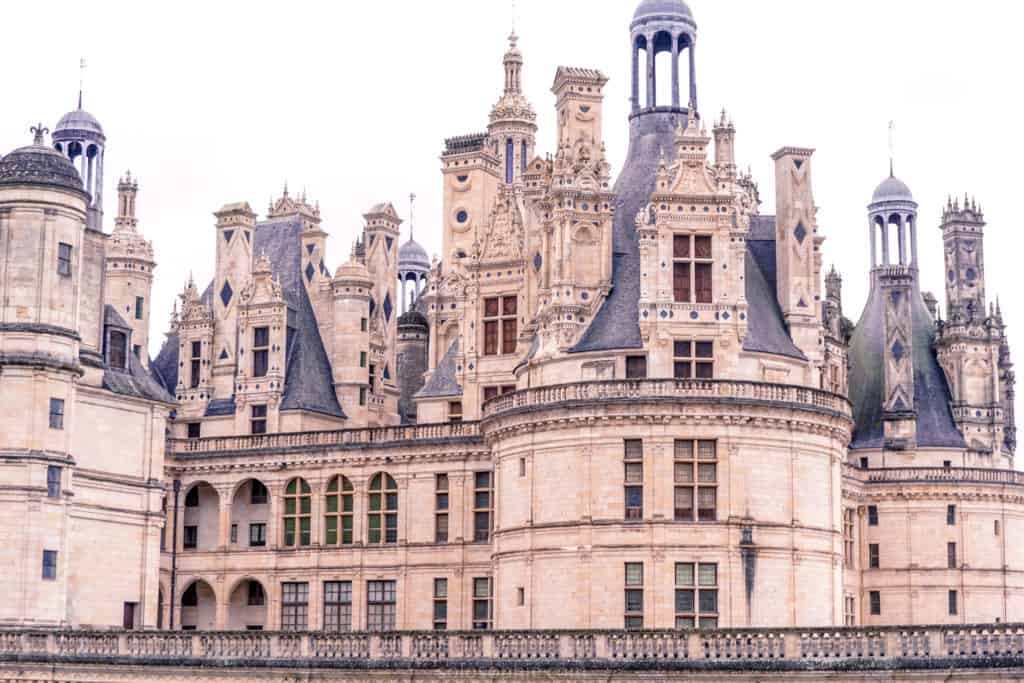 If you’re looking to visit the Chambord Castle for yourself, then I highly recommend visiting the grand French château just before or just after peak season. This way, you’ll be able to see the Da Vinci designed masterpiece in all of its glory, with full opening hours, in the best possible weather, without too many crowds!

After all, together with the Château at Chenonceau, Chambord is probably the most famous of all the Loire Valley Châteaux. Today, the castle comprises of 440 rooms, 365 fireplaces, and 85 staircases, including, of course, the impressive double helix at the very centre of the building. In the height of summer, Chambord can welcome up to 20,000 visitors in a single day! 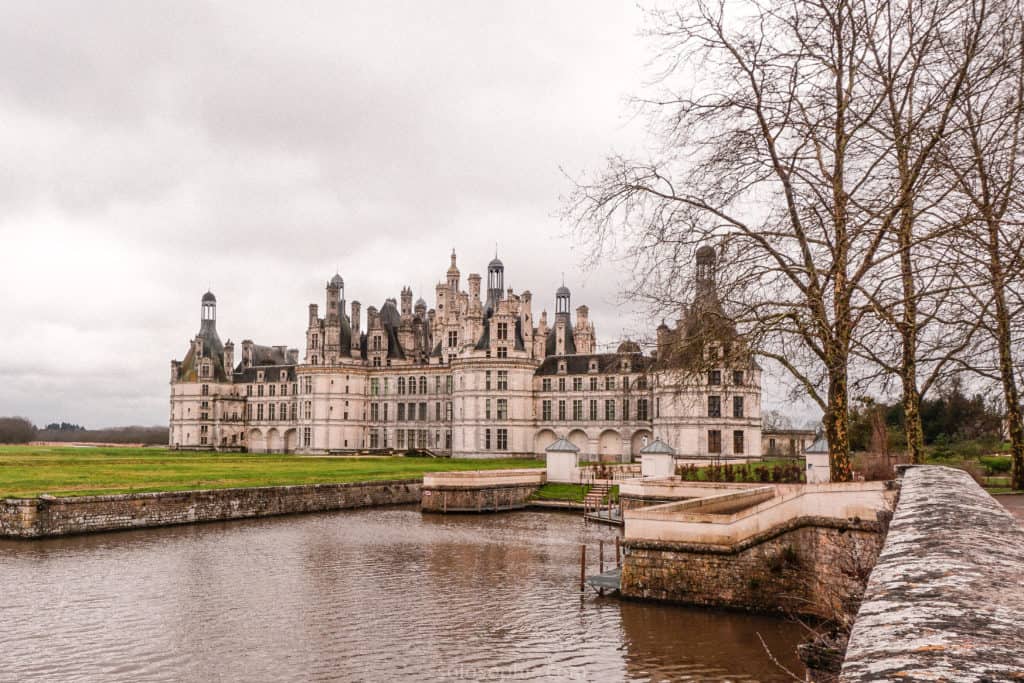 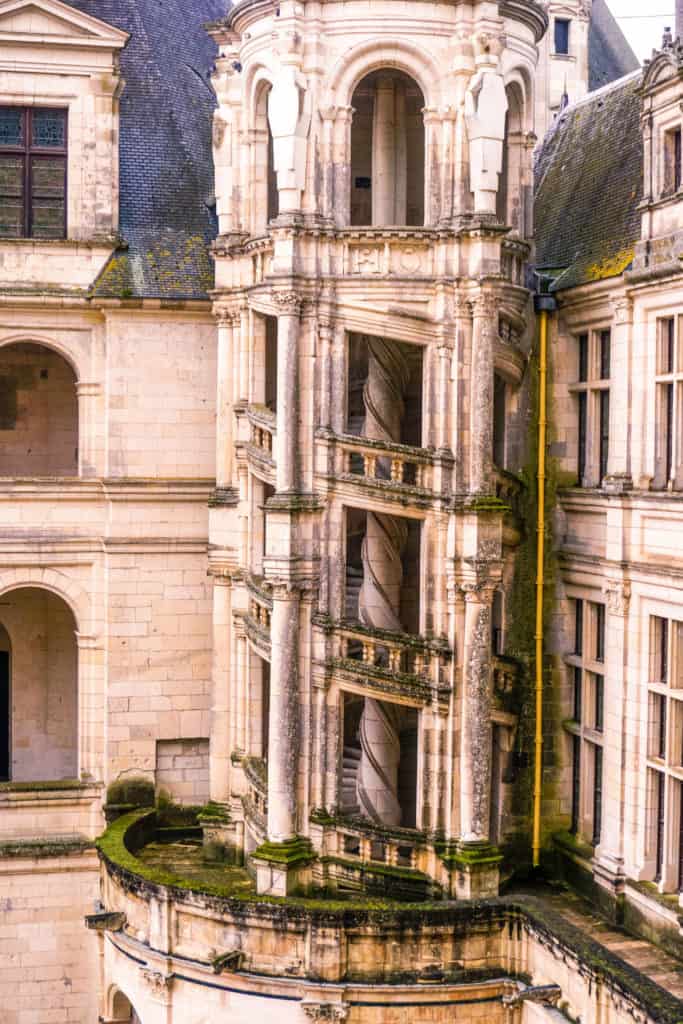 How to visit Château de Chambord

The Château is located in the forests of Solange and is open throughout the year with the exception of January 1st and December 25th. Full rate €13 (free for 18-25 EU residents). Regular buses run from Paris to Chambord via a private company and the castle lies around two hours from the French Capital. Otherwise, shuttles run on a regular basis during certain times of the year from Blois Chambord Station. 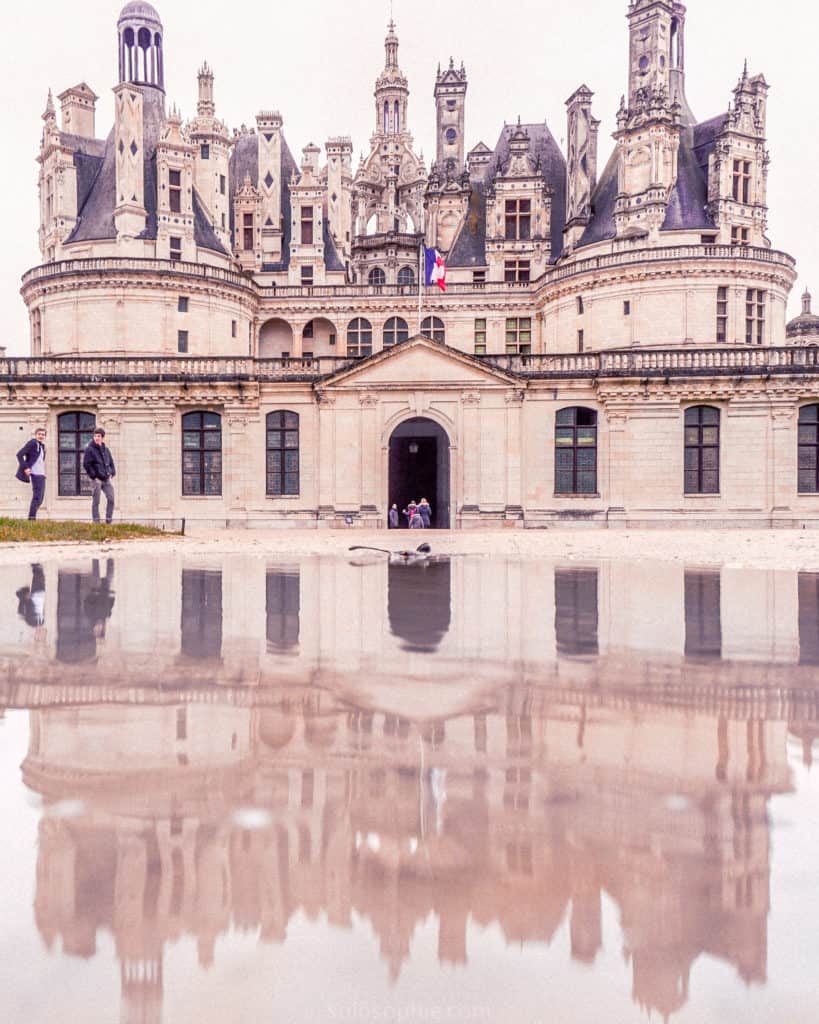