Located in Northern Burgundy, around an hour and a half from the French capital city of Paris, Auxerre is a stunning city characterised by its many churches, winding riverbed, and a plethora of cobbled lanes. Here’s your guide to the very best things to do in Auxerre, France, as well as travel tips and things to know before you go!

Auxerre is located in the north of Burgundy, which is now part of the administrative region of Bourgogne-Franche-Comté. The town is located alongside the river Yonne (this also happens to be the name of the department where Auxerre is located). Some of the closest big cities include Orléans and Dijon.

Is Auxerre worth visiting?

Perfect for a secret French getaway or escape, highlights of this Burgundian town include an abbey founded by St Germain and a beautiful clock tower dating back to the Middle Ages… Other reasons to visit include plenty of traditional Burgundian architecture, as well as several museums and traditional eateries.

Introducing Auxerre, a hidden gem of Northern Burgundy, as well as a brief history of the city

Located alongside the glittering River Yonne, the history of Auxerre dates back to at least Gallo-Roman times when the city was known as Autissiodorum. At this time, the settlement was a flourishing community and was even a provincial capital of the Roman Empire.

Several centuries later, St Germain of Auxerre was born here. Formerly a high-ranking government official, he left his job to pursue a career in the church. The Abbey of the town is now named for him, holds his tomb, and is also where you can still spy some of the oldest 9th-century full-sized frescoes in France.

By the 5th-century, another cathedral had been constructed in Auxerre, with city walls added in the following centuries. In time, even Joan of Arc passed through the city twice, though the second time she was denied entry into the city walls until she offered the citizens of the city (who are known as Auxerrois) money.

What is Auxerre known for?

Best things to do in Auxerre, France

If you’re wondering what to do in Auxerre, then the first answer is that there is no shortage of historical monuments and façades to discover. There is perhaps no structure more emblematic of Auxerre than the central clock tower.

Dating all the way back to the 15th-century, the clock can be found in the heart of the Quartier de l’Horloge along a cobbled lane. Perfect for snapping pictures of, the light is best around sunrise or sunset.

Steps away from the historic city centre, the church of Saint Eusèbe dates back to the 7th-century and was founded by Saint Pallade, a bishop of the city. The current church you can admire (and enter for free) today was constructed between the 12th and 13th-centuries in the Burgundian Romanesque style.

Imposing and situated close to the banks of the River Yonne, Église Saint-Pierre d’Auxerre is one of the three main ecclesiastical buildings in the city. There has been a place of worship on site since at least the 6th-century, though the current building largely dates back to the Middle Ages.

The west façade is a particularly beautiful example of Gothic architecture and the ecclesiastical building itself is constructed in the old winegrowers’ quarter. While in the area, be sure to check out the Portail rue Joubert, a Renaissance gate which was inspired by the Castelnuevo de Naples gateway and once signalled the entryway to an abbey which was found on site.

Truth be told, one of the best things to do in Auxerre is to meander along the banks of the River Yonne and snap photos. From here, it’s possible to spy the abbey, cathedral, and Church of Saint Pierre that make the city so famous.

Head to the Pont Paul Bert (bridge) for the best view of Auxerre. If you’re particularly lucky and there is little wind, then the stunning façades of the city will create a mirror-like effect on the River Yonne.

If you make it your mission to see just one tourist attraction during your time in Auxerre, make sure it’s a visit to the historic Saint Germanus Abbey. After all, the permanent exhibitions are incredibly expensive and completely free to visit!

If you speak French and are looking for a more immersive experience, then for under €10 you can book a place on the 1.5 hours guided tour of the abbey. This includes a visit to the Merovingian crypt, a detailed history of the abbey, the chance to see the tomb of Saint-Germain, and the opportunity to admire the 9th-century Christian frescoes that are the oldest of their kind in France.

Though not quite as important as the Abbey, the Cathedral sits in pride of place atop one of the highest points in the area and is somewhere between the Marin district of the city and the clock tower area.

With its stunning asymmetrical façade and a dedication to Saint Stephen, the Cathedral dates back to the 13th-century, with the crypt dating back to the 11th-century.

Steps away from the Tour de l’Horloge, the Auxerre town hall (also known as ‘Mairie’ in French) can be found at 14 Place de l’Hôtel de Ville and is typical architecture from the 19th-century. The surrounding square is pedestrianised and is populated by plenty of bars and cafés.

On the fringes of town, the Muséum houses a collection of some 160,000 specimens, featuring a selection of natural history and biodiversity, particularly that which comes from Burgundy. Open from Sunday through to Friday, this museum also has a stunning garden you can explore.

For those interested in house museums and antique collection, the Museum Leblanc-Duvernoy is open from Wednesday through to Sunday and has a strong focus on earthenware. Some of the rarer items housed within the collection include pieces of Revolutionary pottery.

One of the best antique shops can be found close to the Cathedral, somewhere between the city’s central car park and the cobbled lane that leads to the clock tower. Called A Antiquites de la Cathedrale, step inside this tardis of antiques and trinkets at any given moment and you can expect to discover a whole host of treasures you’ll want to take home with you…

Rather than seek out key Auxerre attractions, be sure to follow your feet and allow them to take you where they will. After all, one of the best ways to enjoy Auxerre’s timber-framed buildings, cobbled lanes, and storybook feel is simply to get a little lost. En route, you’ll likely discover little-known chapels and plenty of boutique shops.

For a laid back and lazy morning, you simply must head to the best bakery in town (or ‘Patisserie’ as it is so-called in French). Located close to the River Yonne, head here for the best baguettes and sweets in town.

During the week and at weekends, the Pâtisserie also has a side tearoom offering everything from afternoon teas to light breakfasts. I personally had a coffee with pastry and found the atmosphere charming!

Where to stay in Auxerre

I personally stayed in Auxerre for two nights and highly recommend a longer than in the city than a simple one-night stopover. As such, a long weekend is the perfect amount of time to slowly uncover the many layers of Auxerre, as well as the city’s three main historic districts. Here are the best places to stay in Auxerre (based on web reviews and location):

Well-reviewed and located alongside the River Yonne, this three-star hotel is located just a few minutes walk from Auxerre Abbey. Amenities include a bar in a vaulted cellar and breakfast for an extra fee.

Situated in a building dating back to 1854, this Auxerre accommodation can be found on the fringes of the historic city centre. As a three-star hotel, this accommodation has free Wi-Fi and a bar onsite.

If you’re looking for a budget place to stay in Auxerre, then the ibis is located close to the River Yonne, just across the water from the historic city centre. Facilities at this hotel include free Wi-Fi and flat-screen TVs.

Things to know before visiting Auxerre

As Auxerre is a little off the beaten path in comparison with other French destinations in Burgundy, you may well find that English is not as widely spoken here.

Of all the Auxerre tips I could give you, know that having a little knowledge of French will go a long way. As such, I highly recommend bringing along a simple French phrasebook like this one.

Head to the Auxerre tourist office (2 Quai de la République) to pick up a guide to the town. There are several versions available. While there is a free map, if you want the self-guided walking tour version which follows floor markers across the city, then this will cost you several euro.

The best vegetarian food in Auxerre is to be found at the Pizzéria des Cordeliers (26 Place des Cordeliers). Reasonably priced and serving ever-so-delicious pizzas, you can even order a glass of kir to go with your meal. For the best fine-dining food in Auxerre, Le Jardin Gourmand is well-reviewed and can be found on the fringes of the historic city centre.

Finally, the best way to enjoy and visit Auxerre is by simply wandering around the city and getting a little lost. Perfect to visit as part of a longer Burgundian excursion, the city is divided into three parts; Le Quartier Saint Pierre, Le Quartier de la Marine, and Quartier de l’Horloge. Each area has its own distinctive vibe and history and all are worth exploring.

Enjoyed reading about the best things to do in Auxerre? Pin it now, read it again later: 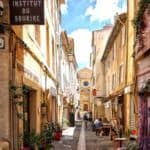 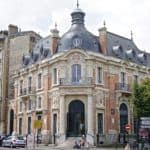 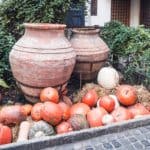 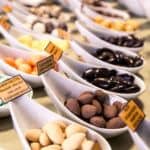