Situated in the West of Germany, Aachen is a historical destination famed for its breathtaking Cathedral and handful of Roman ruins. Come winter, the Aachen Christmas Market draws people from far and wide who wish to experience the magic of Christmas in the city. Here’s your ultimate Christmas Market in Aachen (known as Aachener Weinachtsmarkt in German) guide, as well as travel tips, and what to know before visiting.

Aachen Christmas Market is a particularly beautiful market to visit thanks to its backdrop of Aachen Cathedral, which is a UNESCO world heritage site. As well as twinkling illuminations and trees across the city, the wooden chalets have a rather medieval vibe and appeal to them.

Will the Aachen Christmas Market take place in 2021?

Though the city of Aachen has a fairly large population, much of interest for visitors is concentrated around a small central area surrounding the cathedral that can easily be seen over the course of a few hours. The same can be said of the Christmas Market itself, which also surrounds the Aachener Dom (Aachen Cathedral).

The tradition of hosting a Christmas Market in Aachen began in the 1970s. At this time, the market was a small affair and was held as a ‘printen market’ around the Elisa Fountain.

Today, the Christmas Market takes place in the squares and streets surrounding the Aachen Cathedral, the Charlemagne Centre, and the Aachen town hall. Each area of the market runs into one another, meaning that there are no ‘exact’ locations and instead the entire city is transformed into a winter wonderland.

Food at the Aachener Weinachtsmarkt

Food is a big part of any Christmas Market and the market at Aachen is no exception. One of the top drinks is Glühwein (a hot spiced red wine) which is served in a Christmas mug.

In order to get the drink, you’ll need to pay the deposit of a few euros. You can then either keep the mug as a souvenir or return it in order to get your deposit back.

I personally enjoy collecting the mugs as they make for great plant pots later! Non-alcoholic drink options include hot chocolate and a German version of eggnog which is known as eierpunsch.

When it comes to food offerings, there are a number of sweet and savoury options on offer, though I must admit that you don’t visit any Christmas Market to eat healthily! One of the more traditional foodstuffs that you can purchase at the market is roasted chesnuts.

Other traditional dishes which are particularly tasty include fried potato pancakes (which are typically served with apple sauce and are known as reibekuchen in German), flammkuchen (a thin pizza-like dish that originates from the Alsace in Eastern France), and

Aachen is particularly famous for its Aachen printen, which is a kind of spiced gingerbread that’s sweet and goes perfectly with mulled wine. While sold all year ’round, there’s something to be said of the spiced cookie that really puts you in the Christmas spirit!

How to visit the Christmas Market at Aachen

The centre of the city can (obviously) get pretty busy and so be sure to plan your visit so that you have plenty of time to park and get your bearings before enjoying the Christmas Market. Indeed, so popular is the market that it boasts up to 1.5 million visitors on an annual basis!

Nearby, I would definitely recommend taking the time to visit Monschau, which is home to its own Christmas Market. The darling town is characterised by its timber-framed houses, medieval past, and nearby hiking trails which visitors can enjoy in the Eifel region.

Enjoyed reading about how to visit the Aachen Christmas Market? Pin this article now, read it again later: 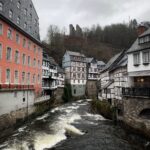 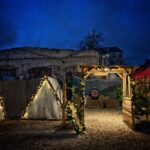 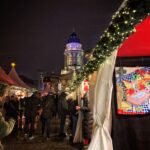