There is perhaps no palace in the world quite as famous as that of Versailles, a French château just a short train ride from Paris. Best known for its status as a seat of royalty, over-the-top opulence, and of course, where the Sun King Louis XIV himself lived in the lap of luxury, Versailles started out life as a hunting lodge in the 17th-century. Here are plenty of Versailles photos which prove that the palace is worth a visit (or another visit if you’ve already been)!

Of course, when it comes to visiting Versailles (be it as a day trip from Paris or a weekend escape from the city to explore the rest of the town), the main attraction of the city is the ornately decorated Versailles Palace. Despite the fact that the town itself was first attested in the 11th-century and is incredibly close to Paris, no royals arrived on the scene until some time later- in 1624 to be precise. 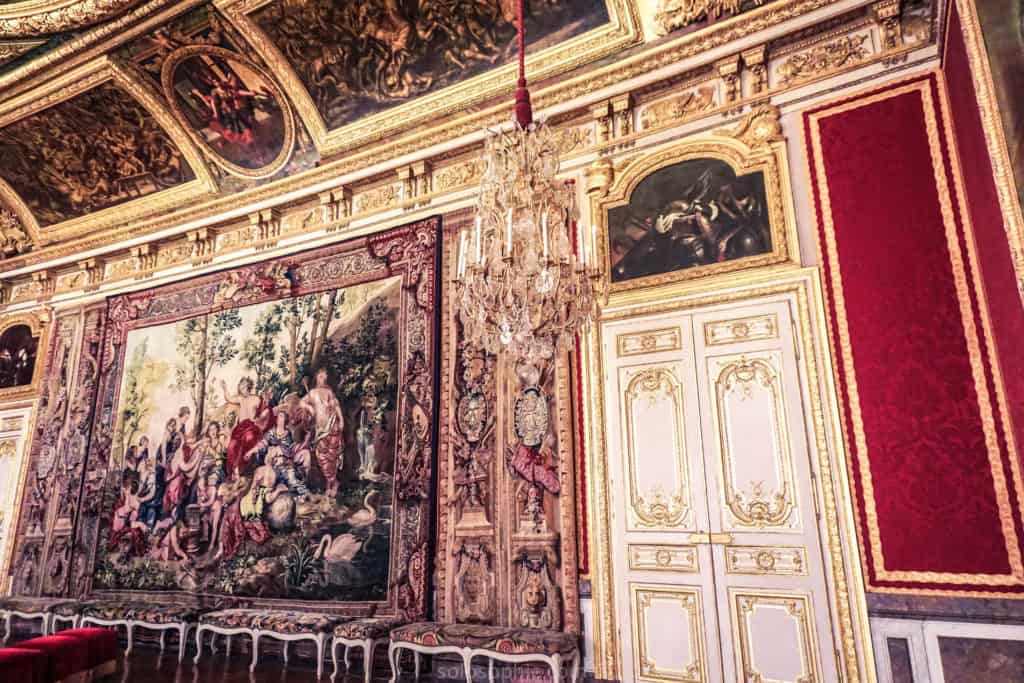 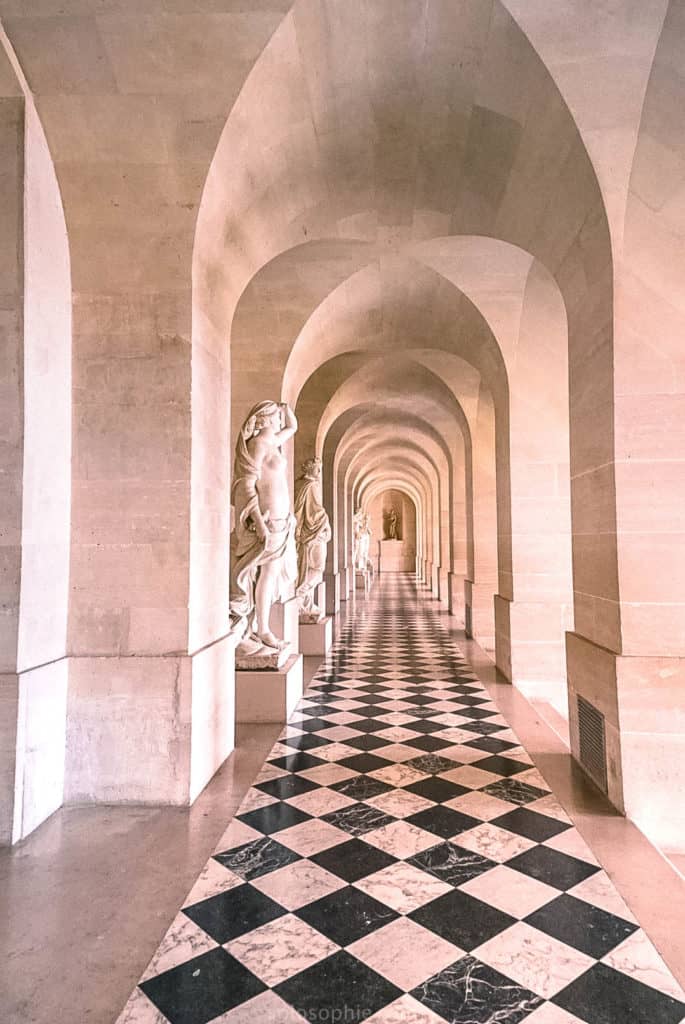 Following its construction, Versailles remained a relatively small hunting lodge for several decades. This is just as the equally sumptuous Palace at Fontainebleau had done so prior to its transformation into the ornate château you can visit today. However, everything changed in the 1660s when architect Louis XIV arrived on the scene and started expanding the palace.

His ideas were grand, and over the course of his reign, Versailles would be transformed into one of the largest palaces in the word. The three main designers brought in for the expansion project had worked together previously. André Le Notre, Charles Le Brun, and Louis Le Vau first formed a partnership during construction of Château de Vaux-le-Vicomte, a palace so sumptuous that the King had thrown away its original owner and confiscated the castle for himself.

Together, the trio gave rise to the beautiful French Baroque architecture of the 17th-century that’s so synonymous with France today. André Le Notre worked on the gardens, Charles Le Brun on interior design, and Louis Le Vau on the architecture. And as you can clearly see for yourself, the results were breathtaking… 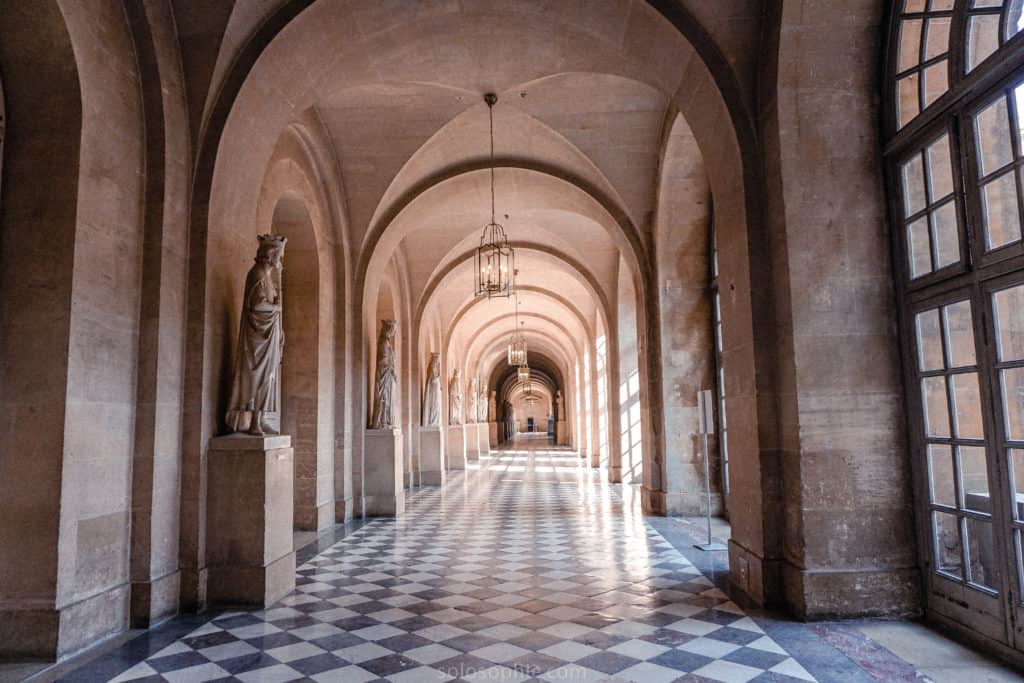 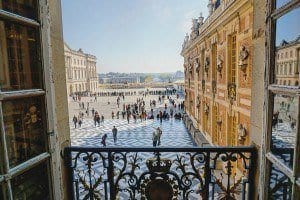 Not to be missed attractions and highlights of Versailles’ main château include the magnificent Hall of Mirrors (Galerie des Glaces) and the ridiculously lavish apartments where the King once resided (Grands Apartements du Roi). Elsewhere in the palace, nearly every corner is filled with intricate detailing, so make sure to bring your camera along! 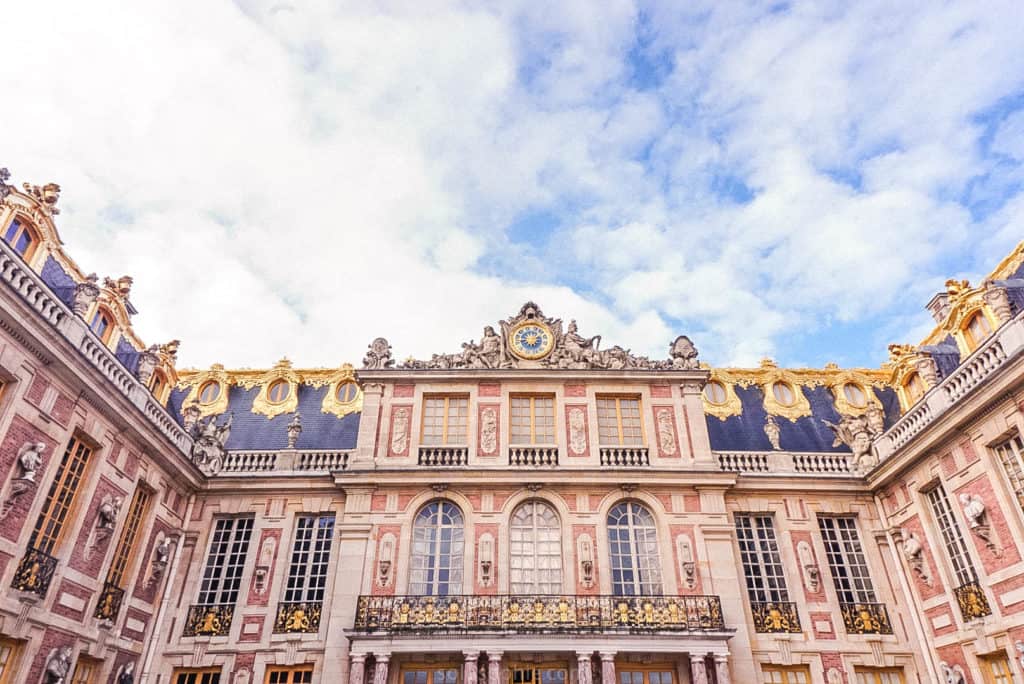 The Le Notre designed gardens are worthy of a visit in themselves and if you venture to the Palace of Versailles on a Monday, they remain open to the public (despite the rest of the buildings being closed). If you’re not too fussed about seeing the French interiors, then Monday is definitely the quietest time to enjoy the green spaces without the usual tourist crowds! Known in French as the ‘Jardins du château de Versailles,’ the gardens were expanded at the same time as the palace in the 17th-century. 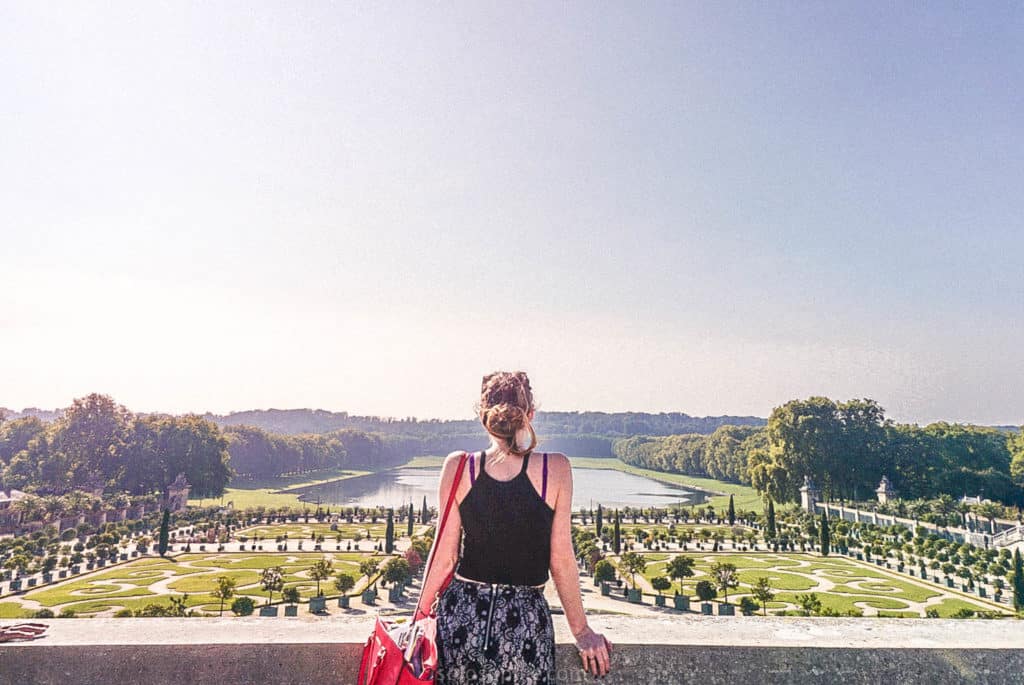 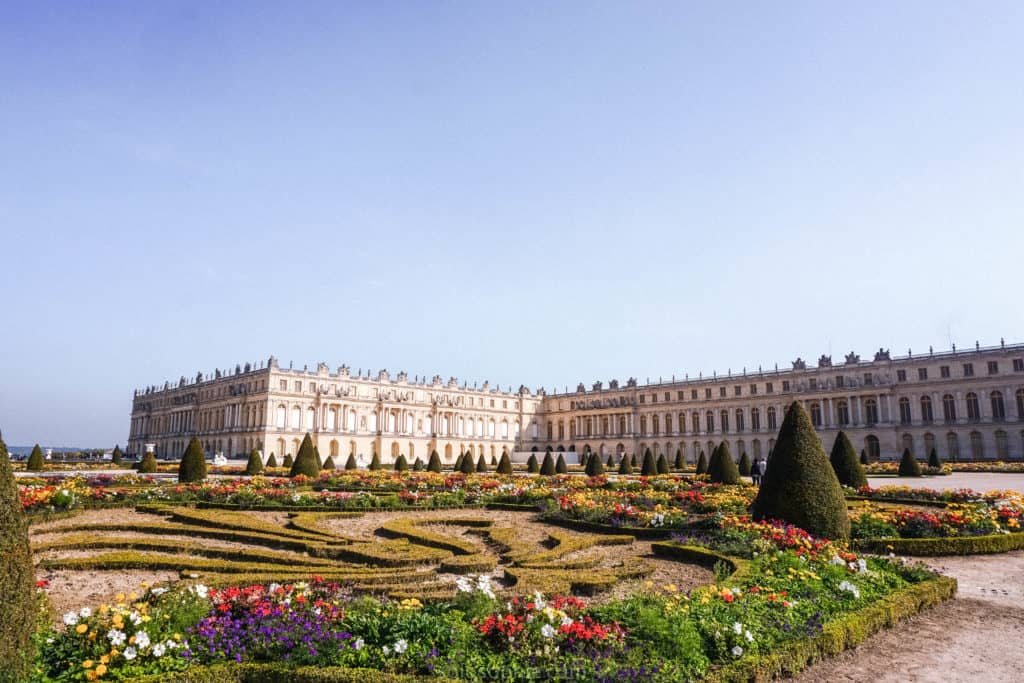 Of all the waterworks, meticulously manicured hedgerows, and sumptuous sculptures in the gardens, the Bassin d’Apollon is likely the most famous of them all. Situated in the very heart of the expansive and terraced gardens, the feature is named for the Greek god, Apollo, the deity of art, song, music, poetry, and light. The fountain was first installed in the gardens in the 17th-century and several of the fountain features were created by the Gobelins factory. 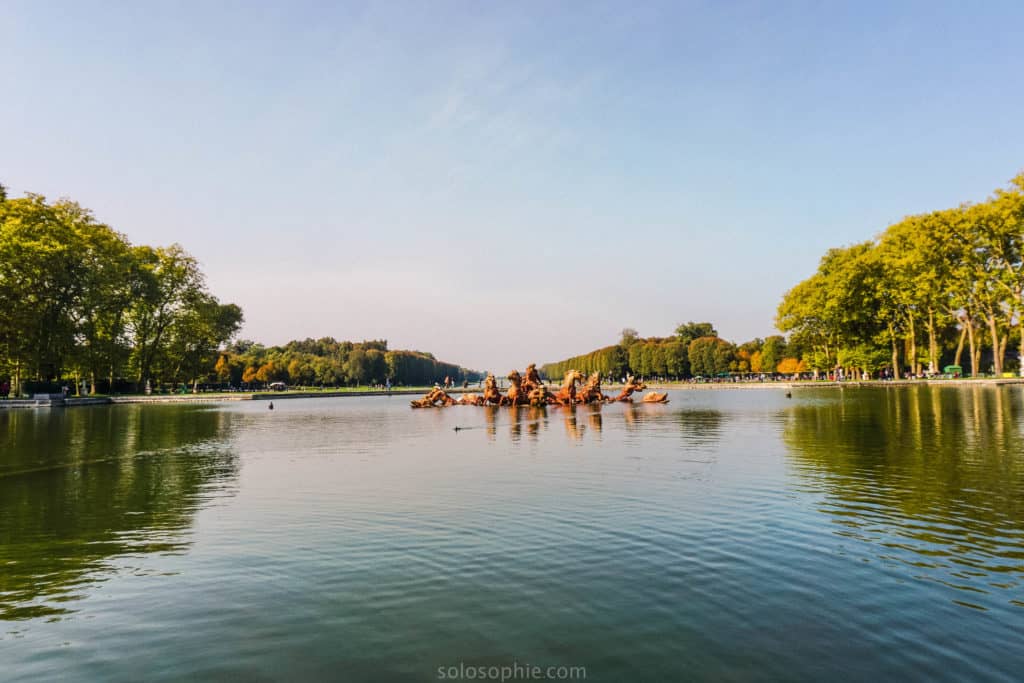 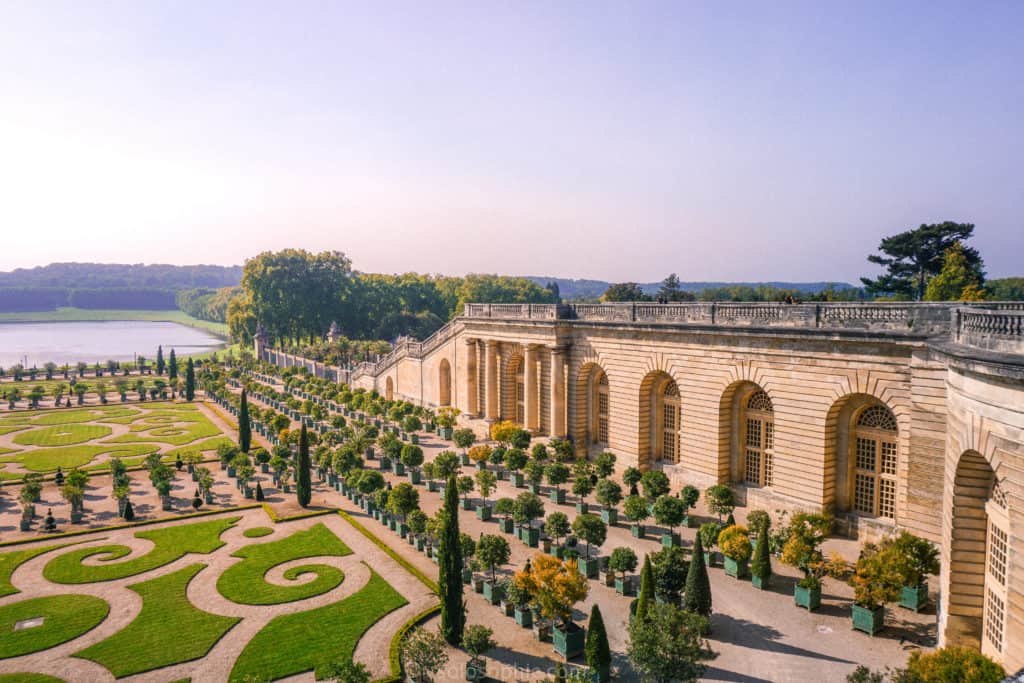 First constructed at the behest of Louis XIV, the Sun King himself, the Grand Trianon palace was designed to be the French Ruler’s escape from the busy hustle and bustle of the grand Château. Although it may not seem like it would have been the case, during the 17th and 18th-centuries, the main Palace of Versailles was always filled with people running around.

Visitors from all over Europe and beyond would always be present in the palace, and a strict ‘court etiquette’ was to be maintained by the Royals at all times. As a way to ‘escape’ his royal life, Louis ordered that the Grand Trianon be built for him and his mistress of the time, Marquise de Montespan. If you’re interested in learning more about life in the French Court during the 17th-century, then I highly recommend watching the BBC’s programme ‘The Supersizers Eat… The French Revolution’. 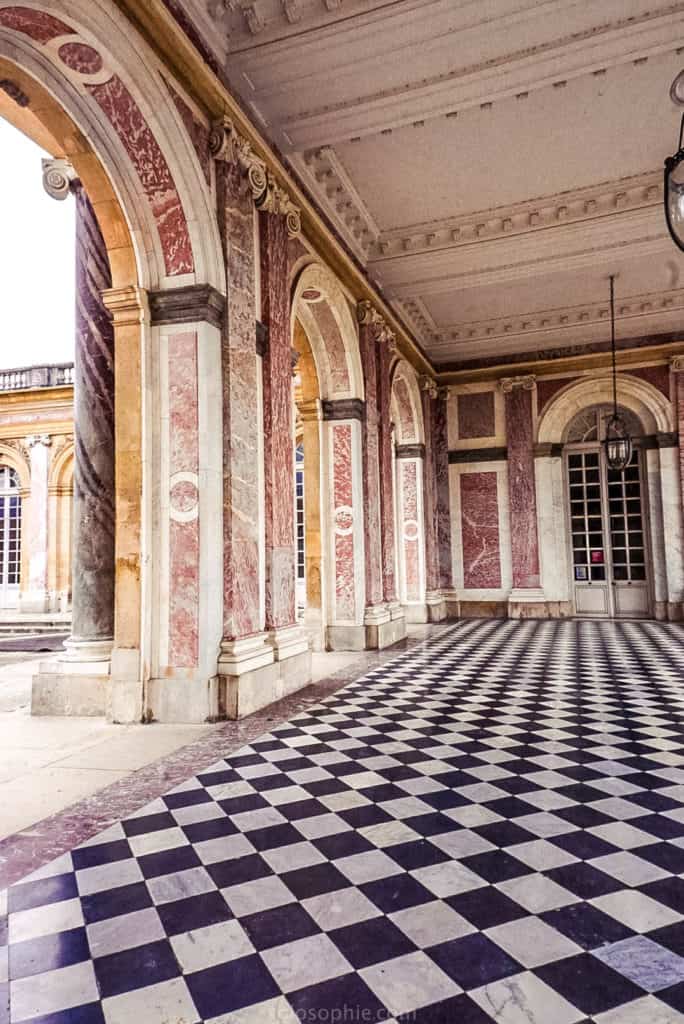 The Petit’s Trianon’s most famous resident is most likely Marie Antoinette. And no, she probably never said ‘let them eat cake!‘ Antoinette was gifted the Petit Trianon aged just 19 by her then 20-year-old husband, Louis XVI. Highlights of the house include an impressive Billiards room, extensive kitchens and plenty of French Renaissance furniture. 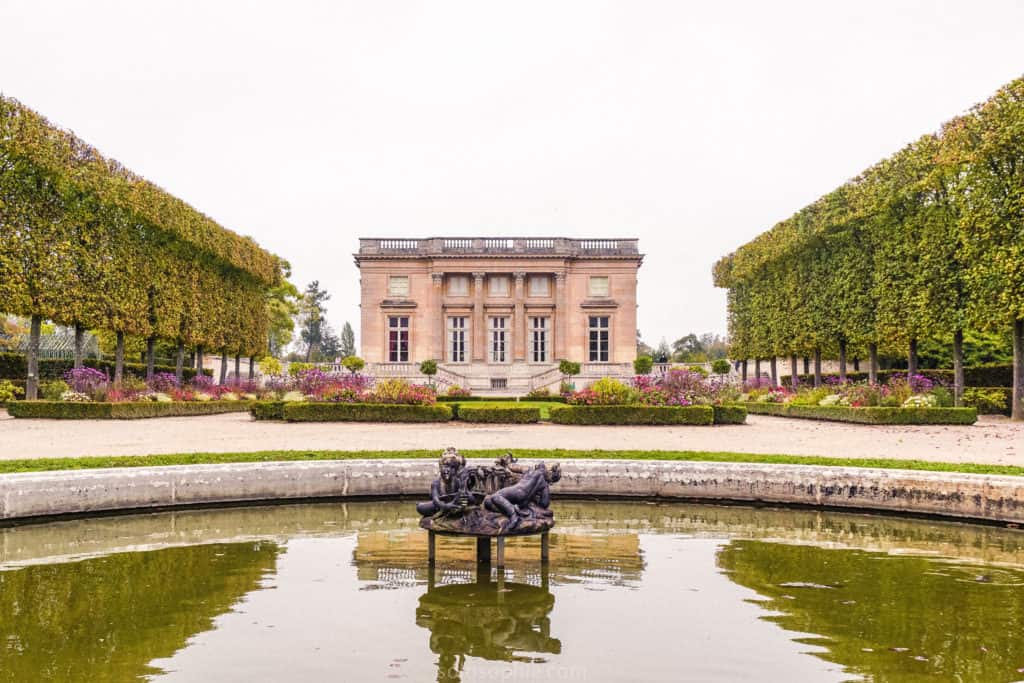 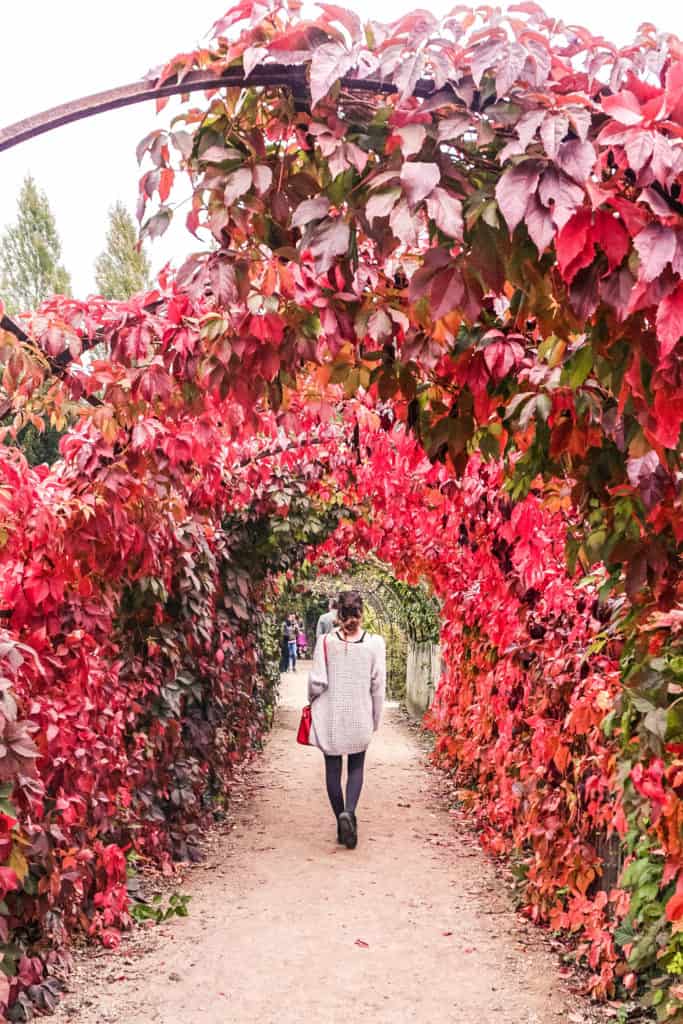 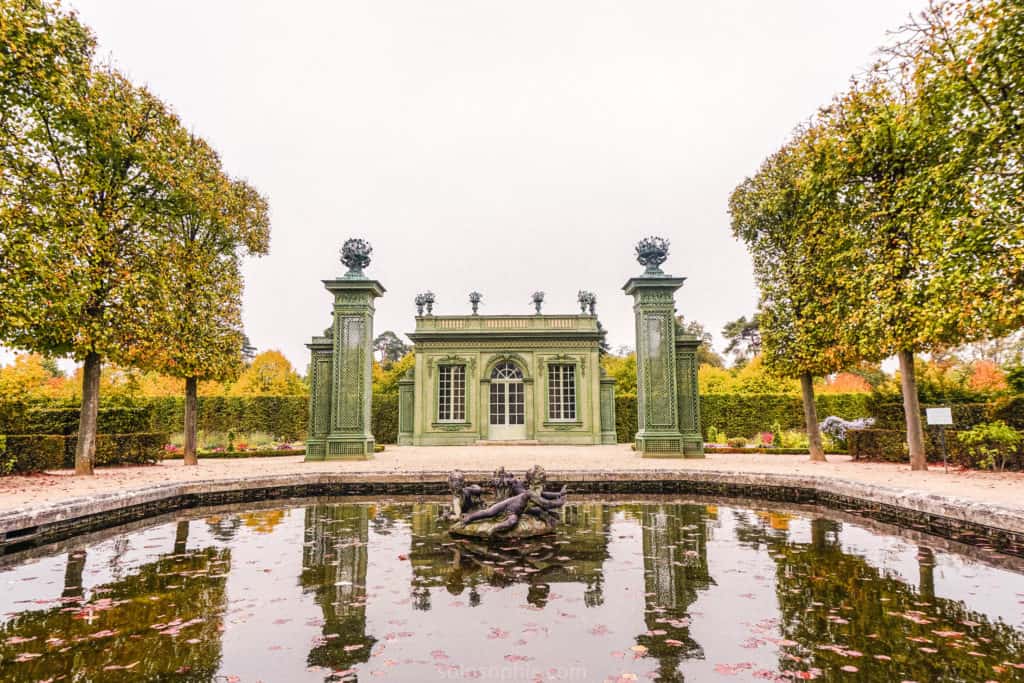 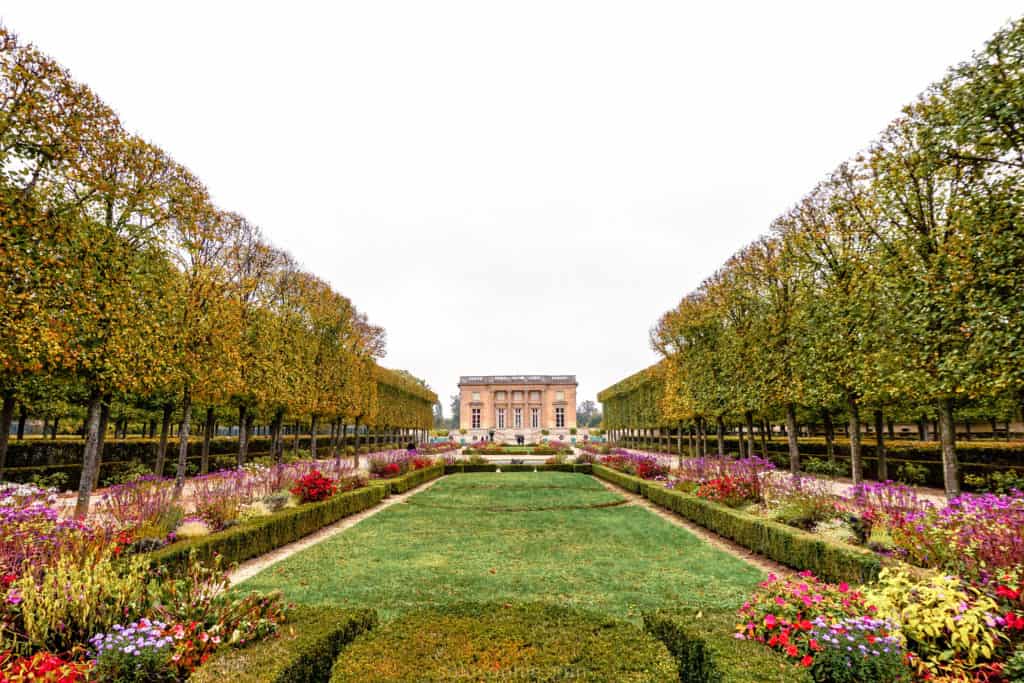 Somehow, many visitors manage to miss out on a trip into the ‘Hameau de la Reine‘ (Queen’s Hamlet) and the farm where Marie Antoinette would go with her ladies to play ‘dress up’ with her ladies in waiting. The elaborate buildings were extensively restored in the 1930s, and then again in the 1990s. They’ve been open to the public since 2006 and a wander around quite literally feels like stepping into another universe. That, and a wander around the Queen’s Hamlet may well be the best thing to do in Versailles… 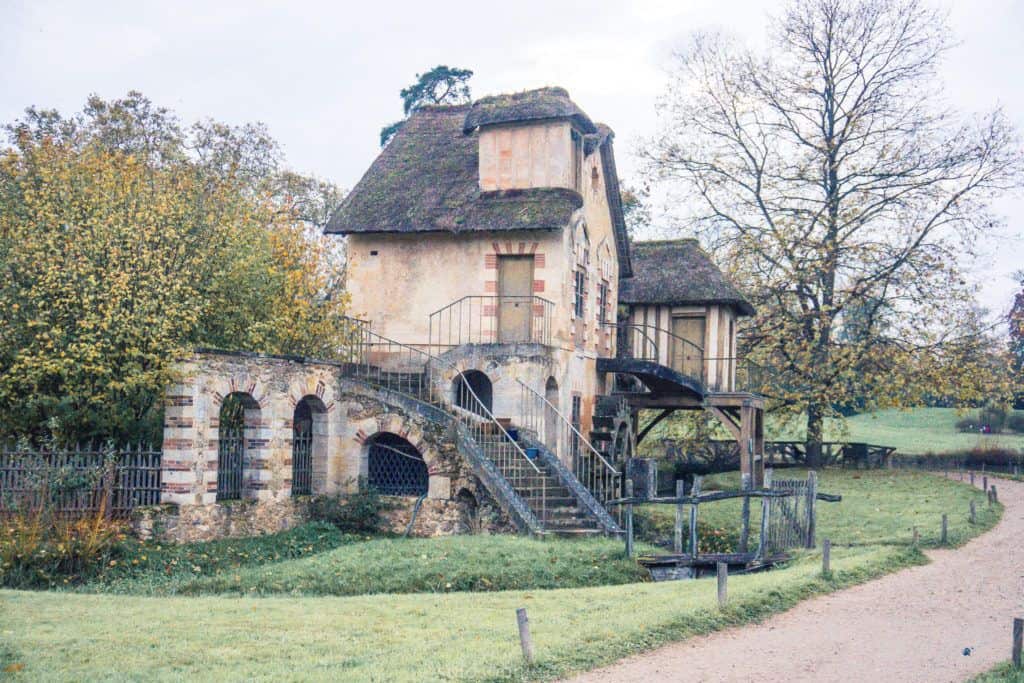 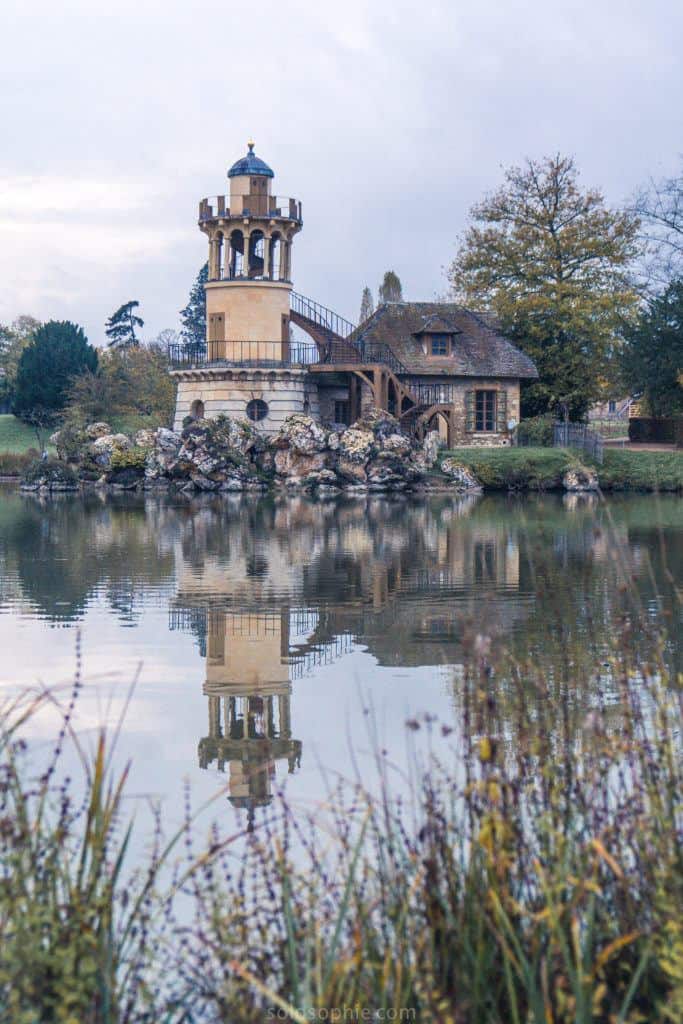 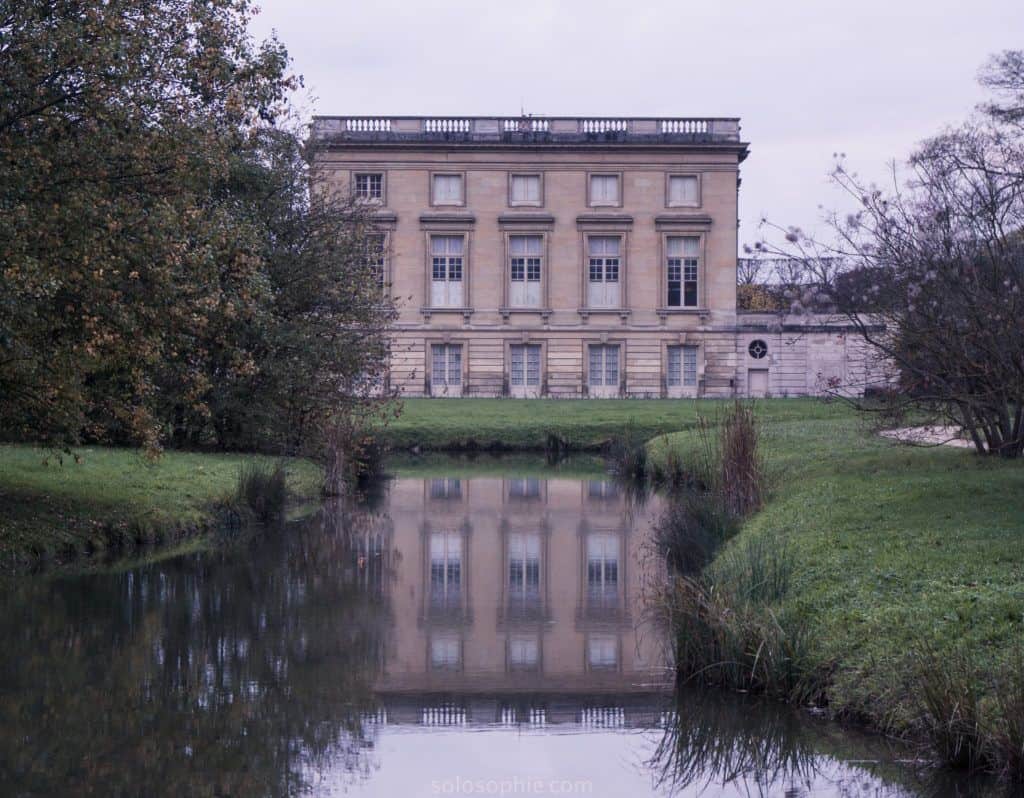 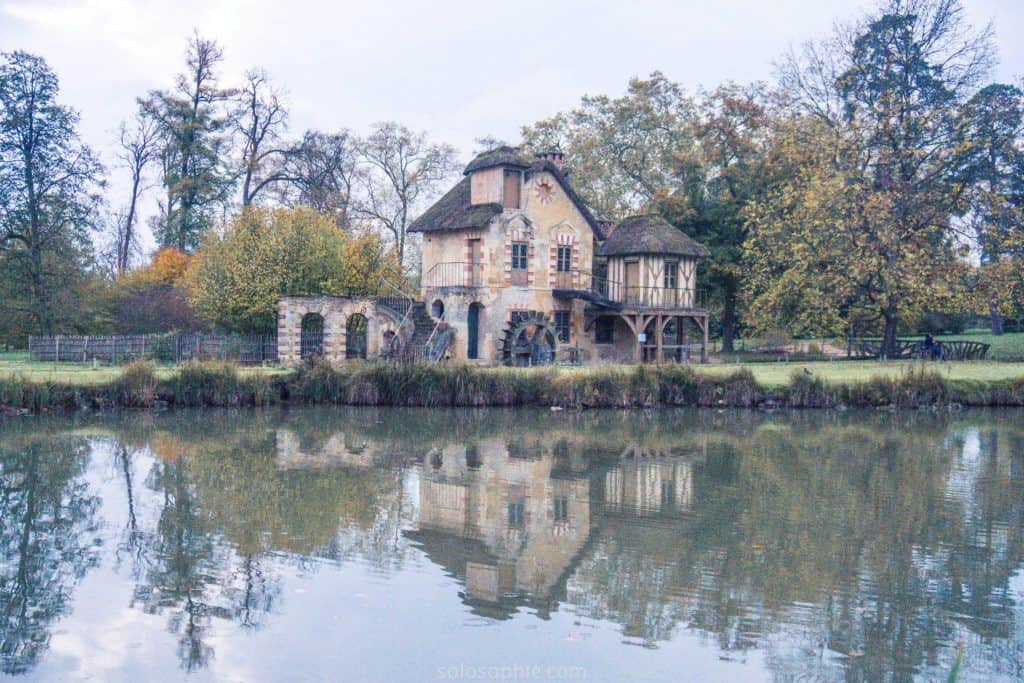 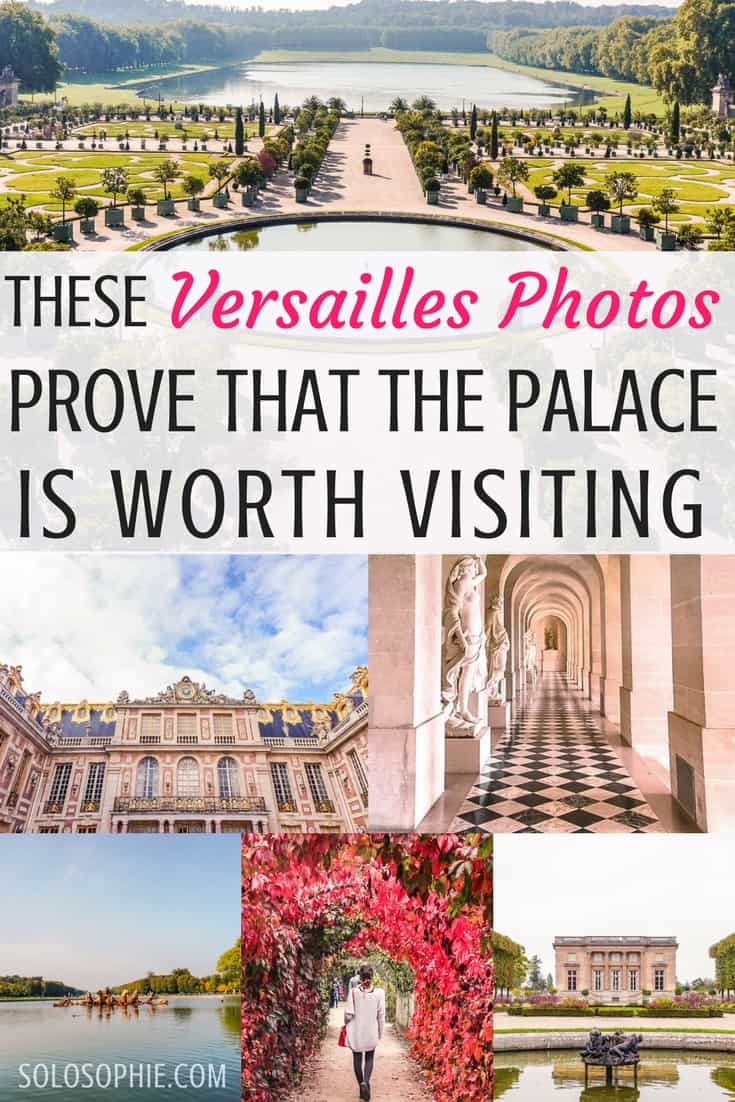 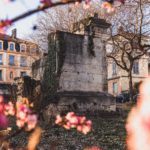 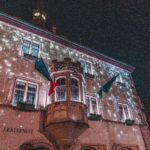 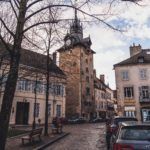 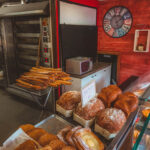 French Bakery Guide: What to Buy & How to Order
2487 shares
Click here to cancel reply.

My husband and I visited the Palace of Versailles a few years ago. We took a photo of the magnificent Hall of Mirrors, placed it on a small canvas, and hung it in our little hallway at home in Midwest USA. It makes me happy every time I see it because it reminds me of our wonderful 20th wedding anniversary adventure we had together in Europe. I love your blog and your photos and your stories. You offer so much beauty and history, it's a delight to read. Thank-you.