Rubens paintings, high domed ceilings, and a dazzling treasury: Sint-Pauluskerk (known simply as ‘St Paul’s’ in English) is probably the most beautiful church in Antwerp, if not all of Belgium. All Baroque interior and Gothic exterior, this ecclesiastical building lies on the fringes of the historic old town and is even home to a secret courtyard… 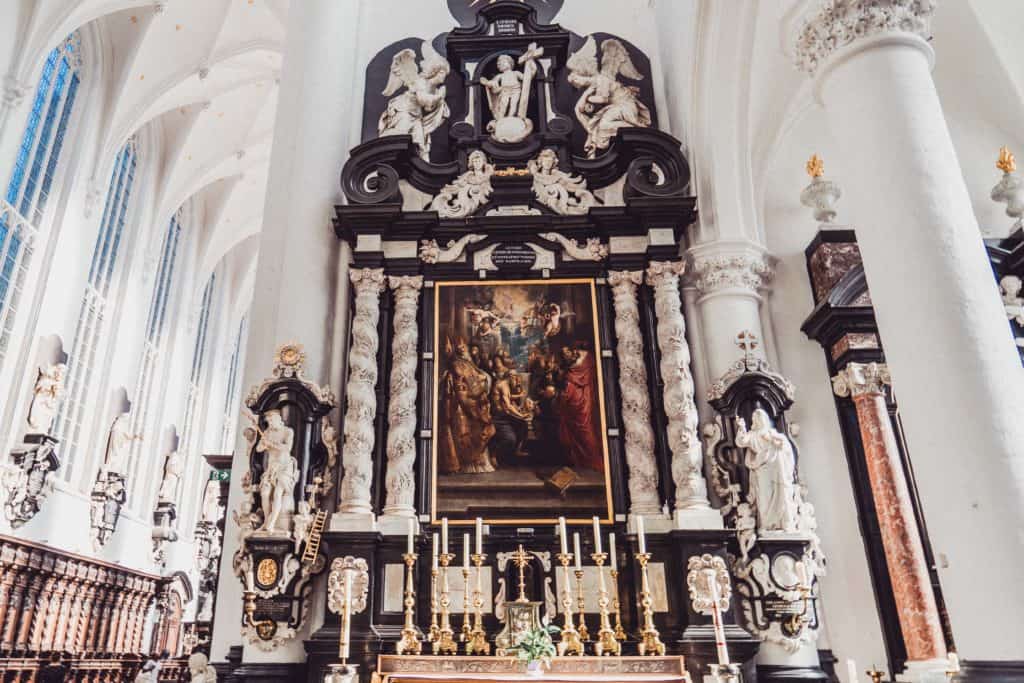 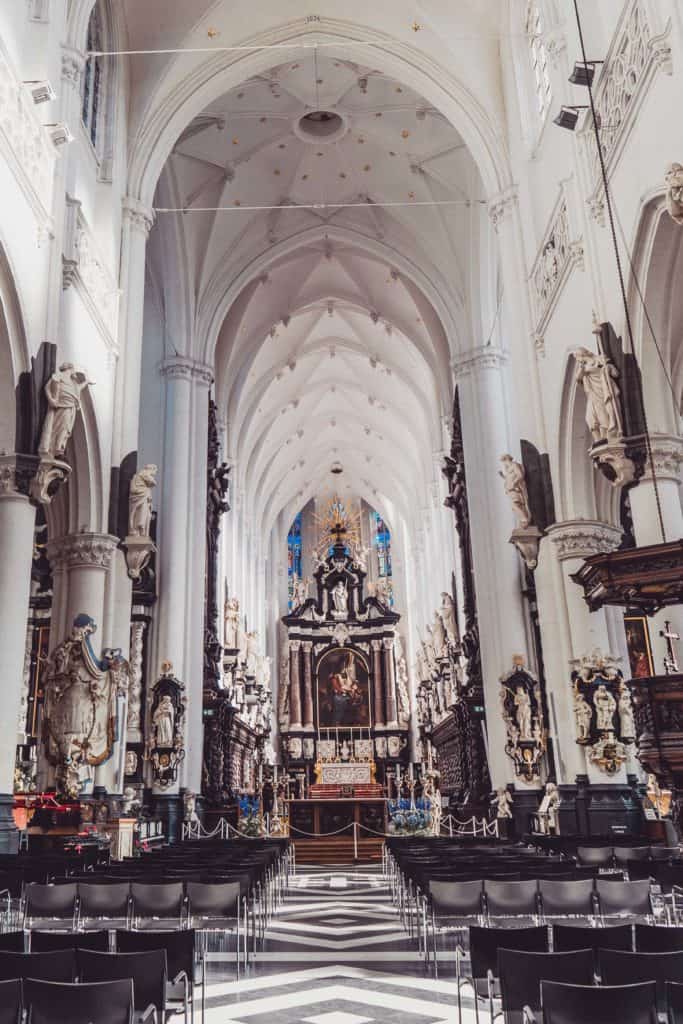 When it comes to churches in Antwerp, there are plenty to visit. From the hidden gem church of St. Charles Borromeo, to the final resting place to Rubens, to the impressively high tower of the Our Lady Cathedral, Anvers is a city that surprises and entices around every turn.

There has been a place of worship where Sint-Pauluskerk is now located since at least the 13th-century. At that time, sailors inhabited the area and the River Scheldt was never too far away. However, ever-changing tides meant that following some major flooding, the decision was taken to build a larger, newer church on an adjacent plot of land. 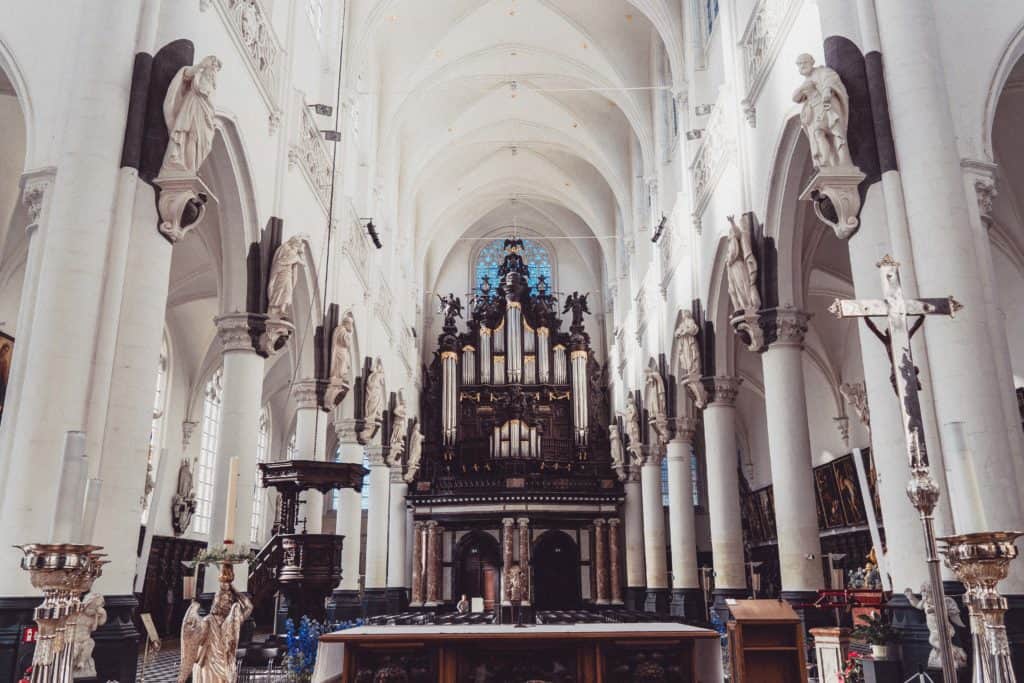 And so, midway through 16th-century, a new church was erected and an adjoining monastery was built for the Antwerp Preachers, the Dominicans. Although Sint-Pauluskerk was consecrated in 1571, peace was only to last for a few years. For, in 1578, the Calvinists came to power and the Dominicans were driven away.

The church interior was transformed entirely and the beginnings of the St Paul’s Church as we know it today began to take shape. And yet more change was to come. Following a devastating fire, some of the church was badly damaged.

A Baroque tower was added to the church in 1679, thus accounting for why the rest of the church exterior if Gothic, while its spire is of the Baroque style. Now, highlights of the ecclesiastical building include a 17th-century organ, over 200 sculptures, and some fifty-something paintings by Rubens, Van Dyck, and Jordaens. 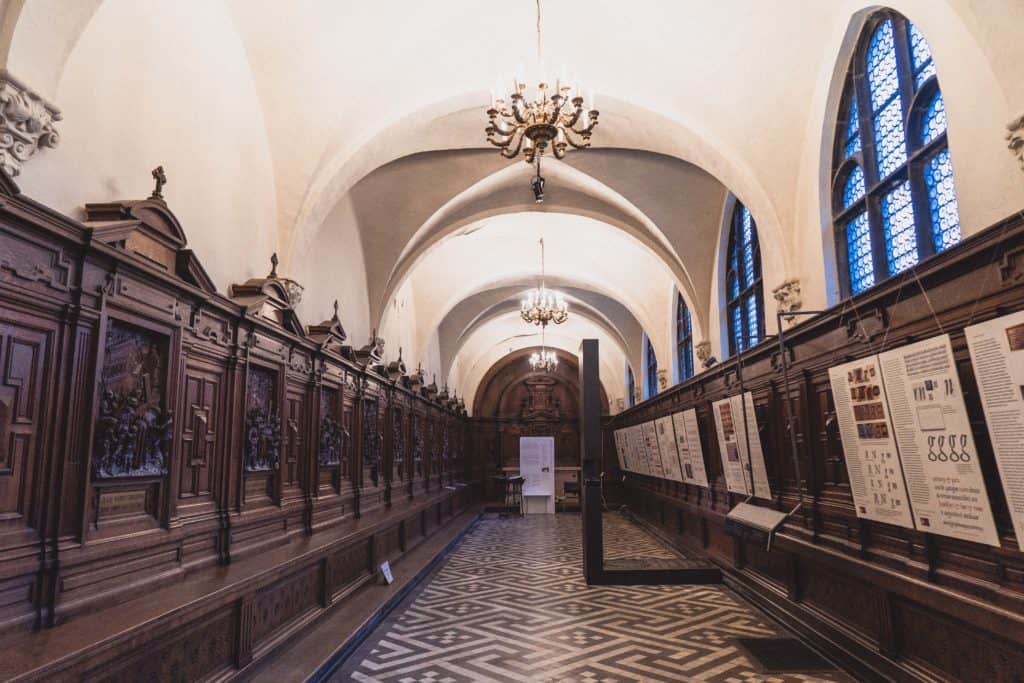 Truth be told, perhaps the most striking feature of this church is not its dazzling interior or impressive collection of paintings by well-known names. Instead, the Calvary Mountain is one of the more unusual churchyards to be found anywhere in Europe.

Located on the corner of Veemarkt / Zwartzustersstraat, the secret yard is home to no fewer than sixty life-sized statues, each individually carved. For those unsure as to the meaning of the word ‘calvary,’ it’s simply used to denote an open space where a monumental crucifix is to be found. That of Antwerp is built on the site of a former Dominican cemetery and was built between 1697 and 1747. 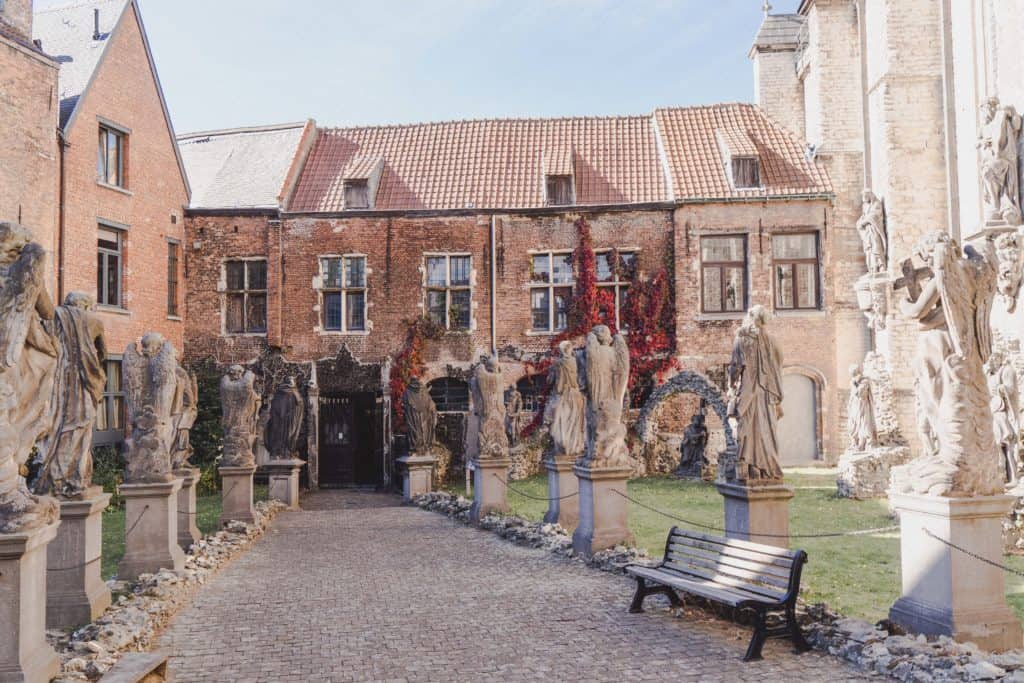 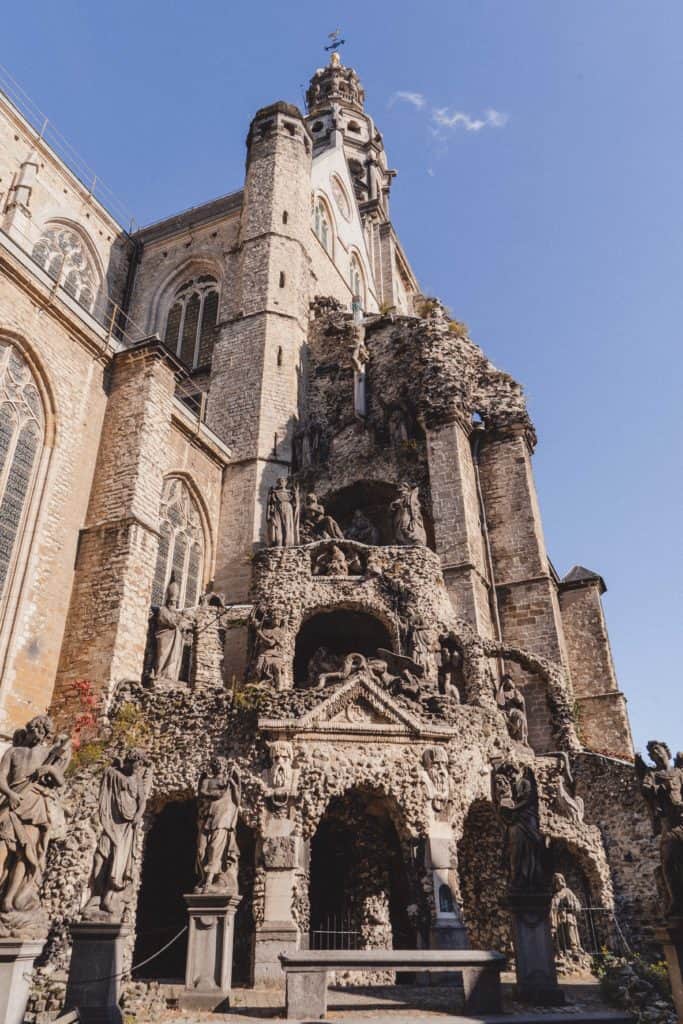 Madonna of the Rosary was completed in 1607 by the Italian master of Baroque himself, Caravaggio. Though no one knows quite how the painting found itself in Antwerp, it was eventually installed as the altarpiece in the Sint-Paulus Kerk thanks to the generosity of many of Antwerp’s greatest artists of the time.

However, should you wish to visit the church today, it’s worth noting that the Caravaggio on display is not the original, but actually a facsimile by Flemish copying and painter, Andreas Bernardus de Quertenmont. The real painting was stolen by Joseph II of Austria in the 18th-century and can now be found on display in Vienna. 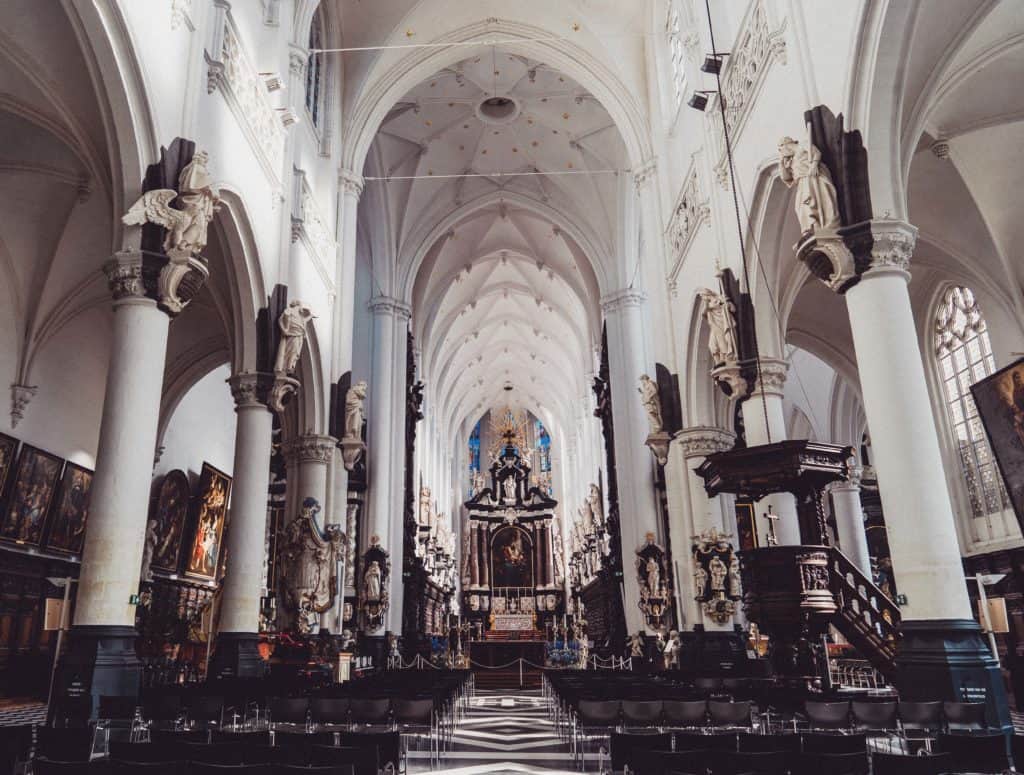 The church is free to visit and is open on a daily basis. When paying a visit to the church, be sure to turn to the right immediately as you enter through the doorway so as to visit the church’s secret garden. This oasis of calm in the very heart of the city is one of the most unusual churchyards I’ve ever visited and is well worth your time!

Otherwise, once inside the church, there’s the organ and altarpieces to marvel at, a treasury to wander around, and an ever-changing exhibition in the former monastic quarters. One of the more unusual features of the church (other than its Calvary) is the mechanised altar which allows for different paintings to be displayed at different times. 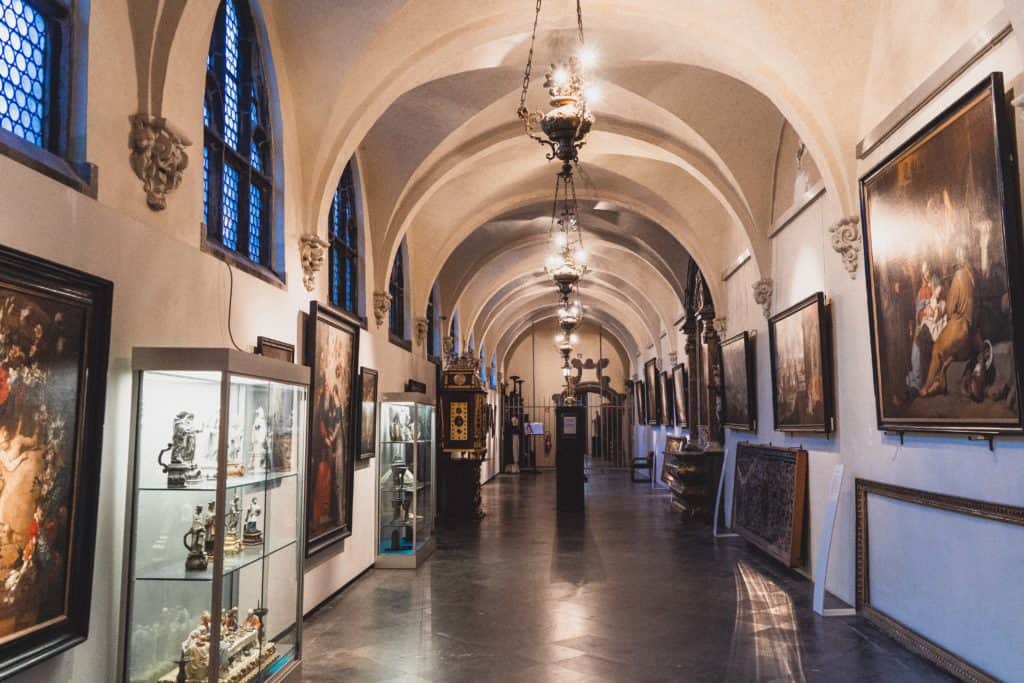 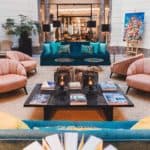 Hotel FRANQ Review: Staying in a Former Bank in the Heart of Antwerp 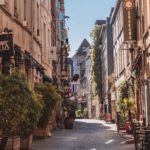 One Day in Antwerp Itinerary: Best Things to do in Antwerp 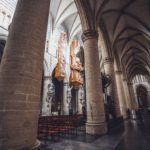 10+ Wonderful, Fun & Free Things to do in Brussels 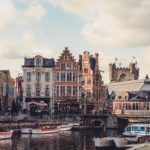