One of the best ways to experience a new city as a local would is to explore it on foot. And the capital of the UK is certainly no exception. Here’s a Self Guided London Walking Tour. In it, you’ll find plenty of history and culture sites well worth a visit, particularly if you’re looking to delve into the heart of the very history of where ‘Londinium’– as the Romans called it- began.

The walk is best attempted on a sunny day when the streets are warm, a summer vibe is in the air, and the city looks its best. Although the majority of the tour is on well paved flat surfaces (with a few cobbled lanes thrown in), I highly recommend shoes that are comfortable to walk in as you’ll probably end up walking a lot more than three miles after wandering around all of the recommended sites; especially so if you opt to head up the 300+ steps of the Monument to the Great Fire of London!

The best coffee shops to stop and enjoy a cake or coffee during the walking tour are located at the top of the Sky Garden and in the entryway to St Mary Woolnoth’s Church. If you’re looking for a more budget lunch option, then there are plenty of convenience stores around where you can purchase a sandwich or soup. One of the best spots to enjoy a picnic outdoors is in the tranquil space of St Dunstan in the East, a former church turned public garden following WWII. 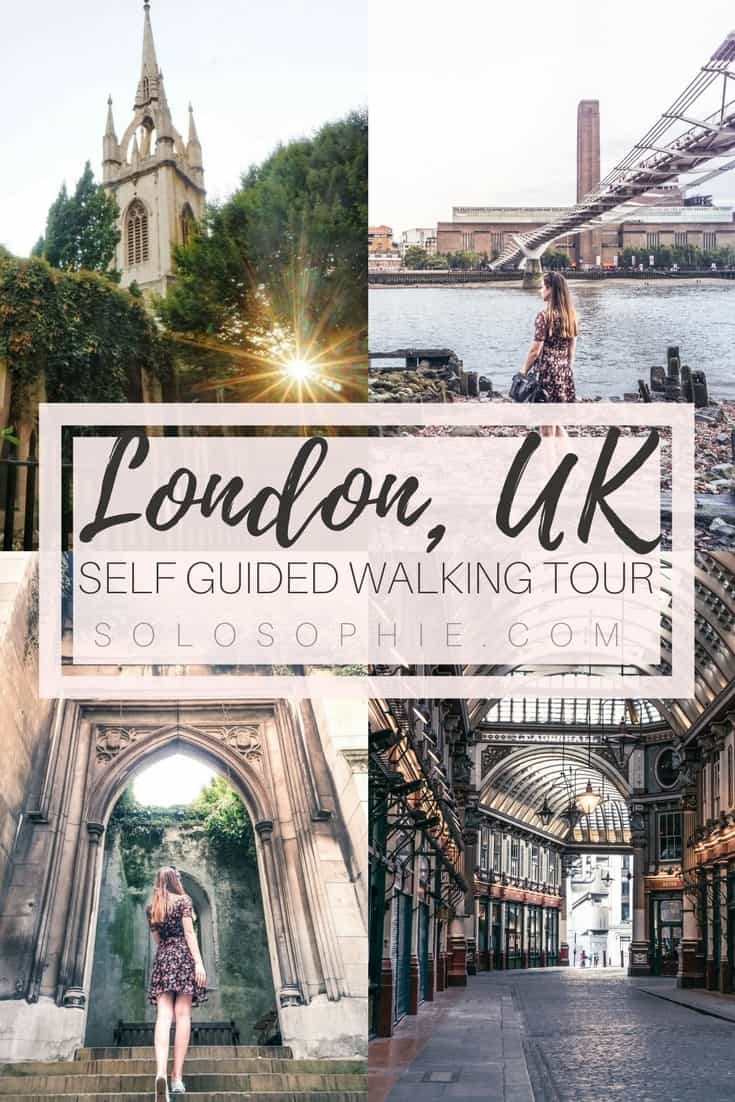 Tower Bridge is easily one of the most iconic spots in central London and it’s a must-see attraction for any first time visitor to the city. After all, the Victorian built bridge is certainly a feat of engineering in its own right and the suspension bridge is used by over 40,000 people a day.

Built between 1864 and 1894, it was criticised when first built but has since become a much-loved part of the London skyline. Walk across it, admire it from afar when walking along the Thames or pay a small fee to enter the Tower Bridge and learn about its history, as well as that of London. 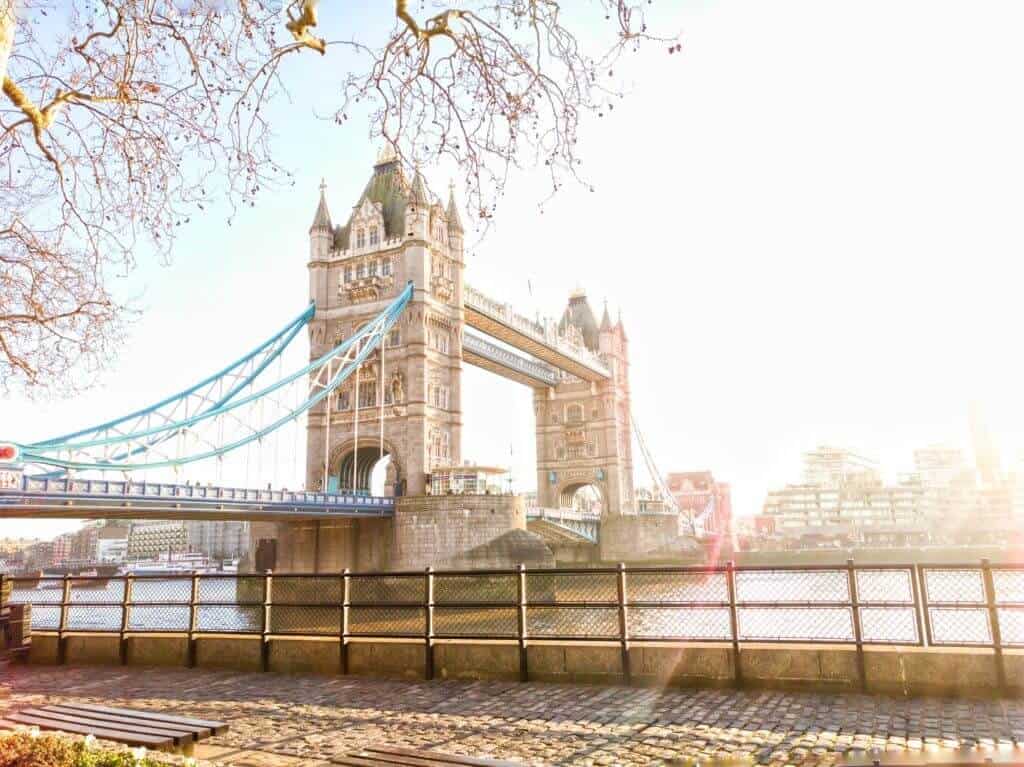 Home to the Crown Jewels and a tower that once kept royalty under lock and key, the Tower of London is the UK’s most famous former prison and is hard to miss when strolling along the Thames. Even if you don’t fancy going in (entry tickets can be rather pricey), the Tower is still worth a look, if only for a quick glance on your way somewhere else. 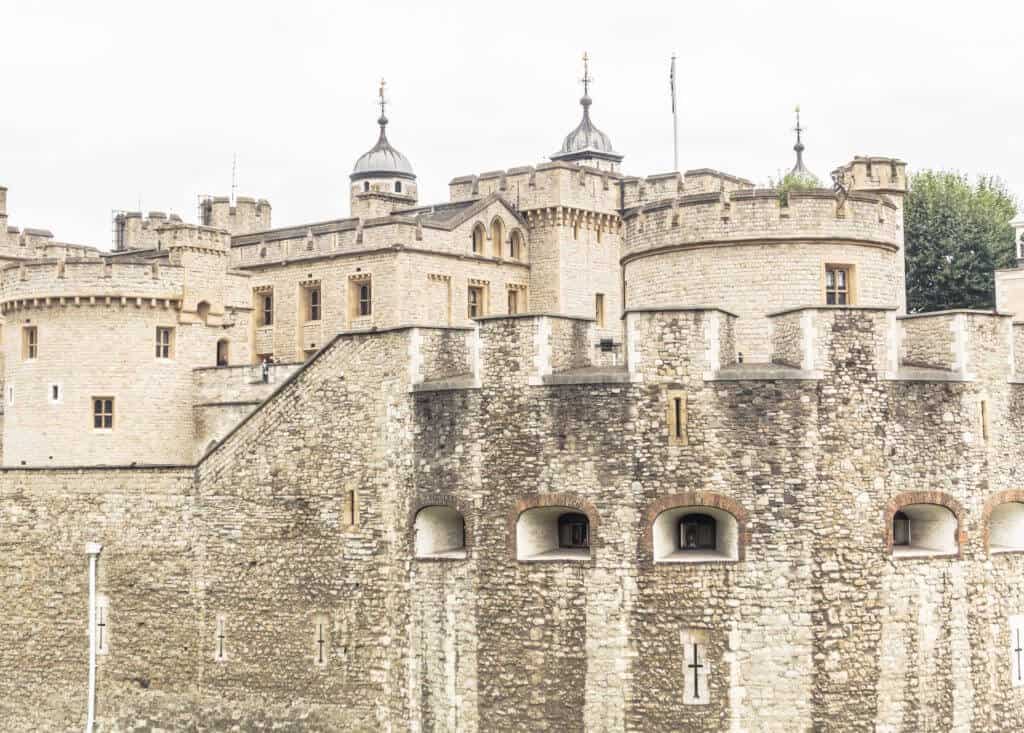 St Dunstan in the East

Over the years, many additions were added to the building, including a tower by Christopher Wren, which happens to be the only part of the ecclesiastical building that survives to this day. During WWII, the church was badly damaged during the Blitz. And, following the war, the decision was taken to leave the shell of the church as it was, and transform the space into a public garden. 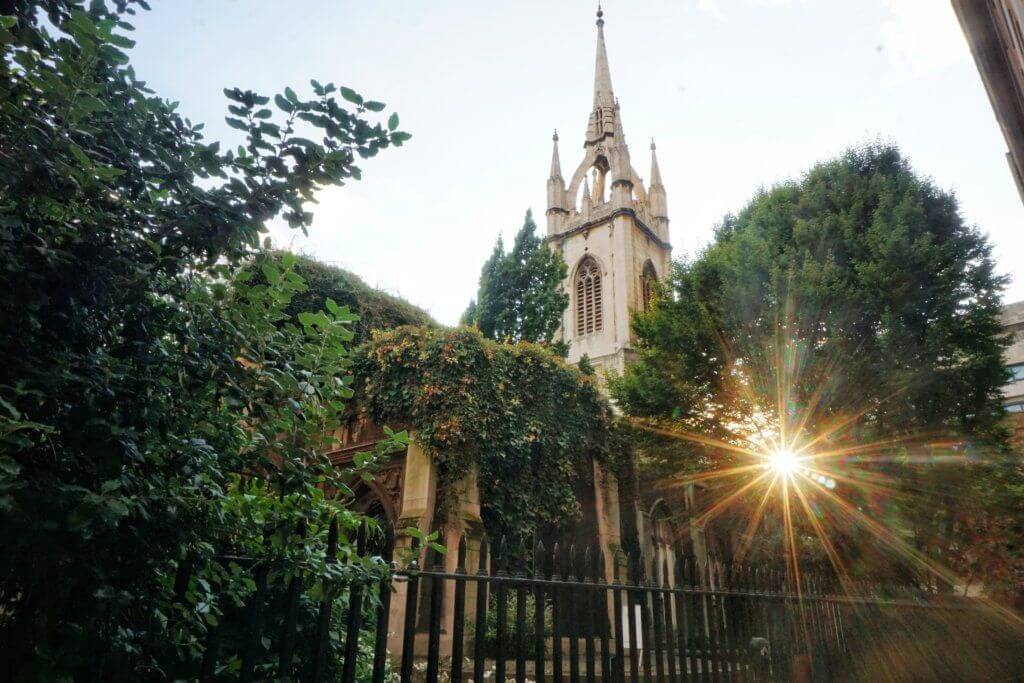 Although you have to book in advance, the completely free view from the top of the Walkie Talkie building is one of the best in London. The Sky Garden was opened to the public in early 2015 and has been offering spectacular views to the public ever since.

Though it was a controversial building from the outset (planning permission was only granted for the whole building because of the proposed gardens), 20 Fenchurch has since become incorporated into the fabric of daily London life. At the top, there’s a café, as well as an open-air balcony and some plenty plants to admire. 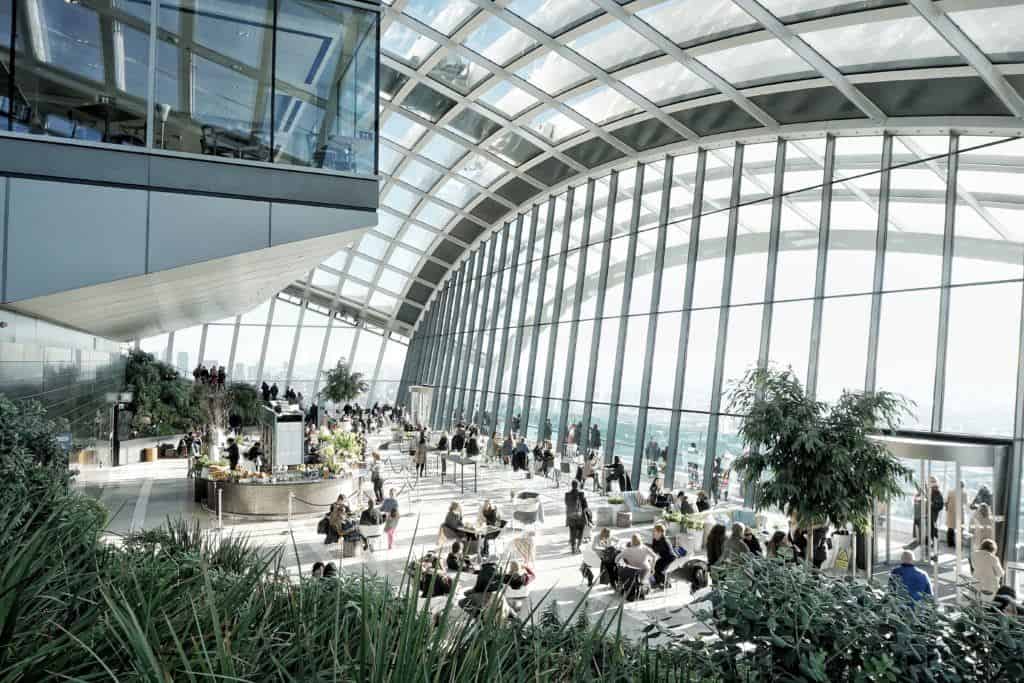 The pretty and intricate details of Victorian-built Leadenhall Market are so iconic that they featured in the Harry Potter films as the home of the Leakey Cauldron. There has been a market here ever since the 14th-century, making it one of the oldest trading places in the entire capital.

Situated in the financial district of London, Leadenhall Market was constructed in the late 1800s and is filled with eateries, boutique shops, as well as all of the regular chain stores that can be found throughout the UK. 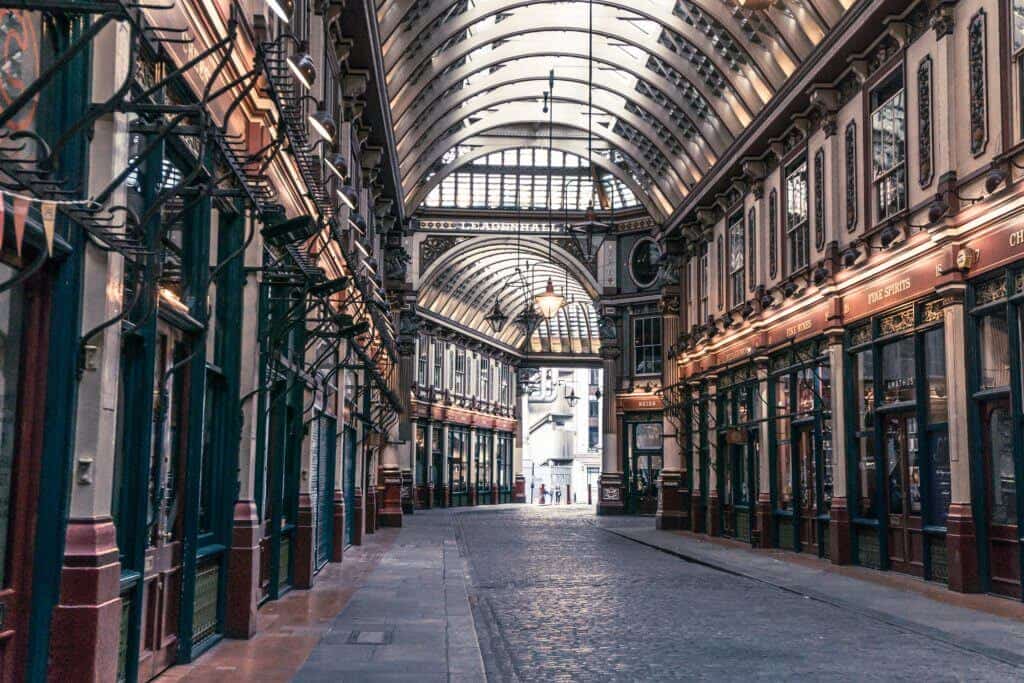 Full name, ‘Monument to the Great Fire of London,’ the Monument is situated next to a tube station of the same name. If you’re looking to spend at least three days in London or more, then an ascent up the Monument is definitely worth the views and three to five pounds entry fee.

The monument was built to both commemorate the fire of 1666 and celebrate the rebuilding of London following near complete destruction. The chief architects were Christopher Wren the (also architect of St Paul’s Cathedral) and Robert Hooke (also architect of Montagu house). 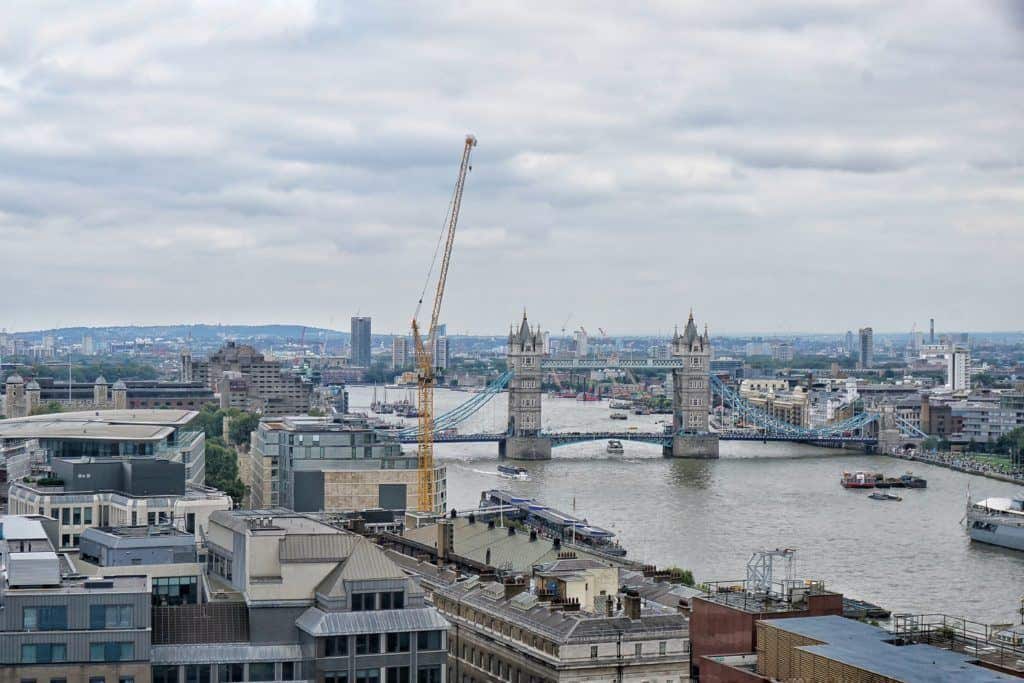 Coffee, cake, and a tea room in the interior of a church, it could only be St Mary Woolnoth’s an unassuming church in the heart of the city. Though it may look like a regular Church of England place of worship from the outside, the site has been used for worship for well over two thousand years.

The Grade I listed property currently on site was built in the 1700s and is filled with beautiful architecture of the English Baroque variety. Inside the porch to the church, you’ll find a sweet little coffee shop where you can sip on your espresso surrounded by centuries worth of history. 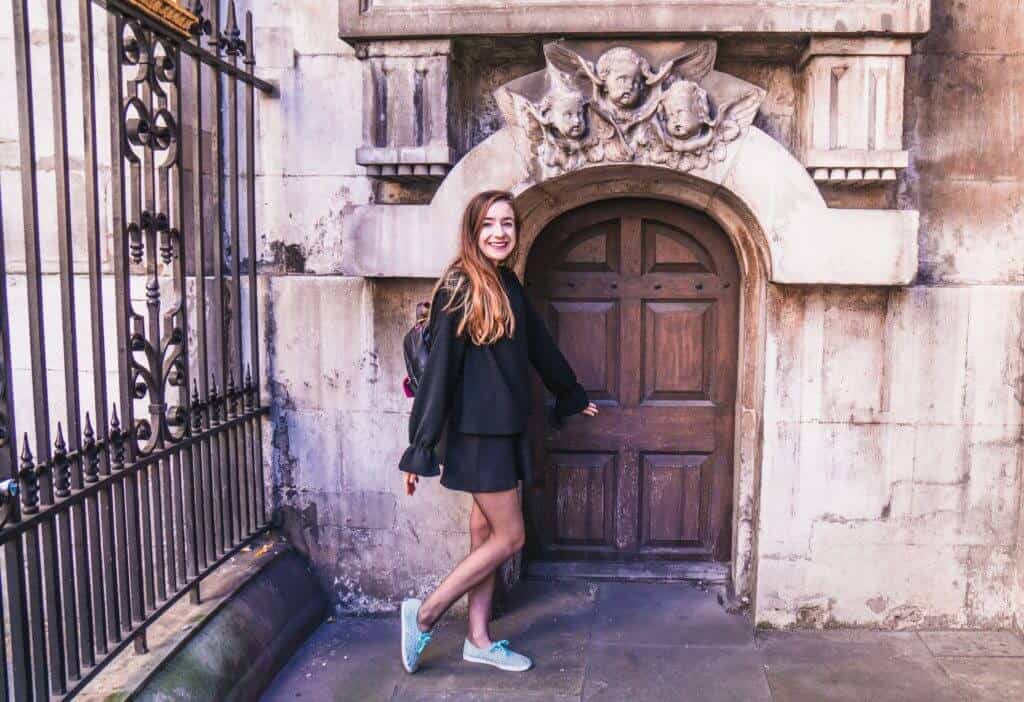 Christopher Wren at his best, St Paul’s Cathedral is topped with pineapples and is in the very heart of the City of London, an area where the entire capital city began. St Paul’s Cathedral has dominated the London skyline for over 300 years and was once the tallest building in London. Though it’s quite expensive to enter (apart from on a Sunday when you can’t wander around the church, but can attend a service), the structure is still pretty impressive from the outside! 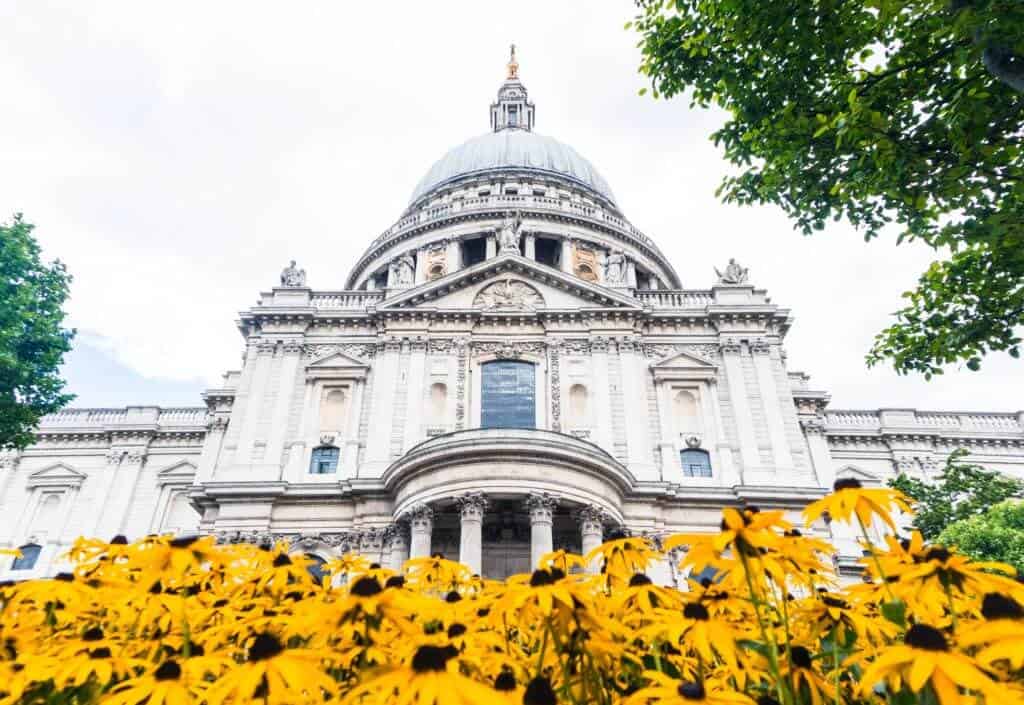 Featured in dozens of films including Harry Potter and the Half-Blood Prince, Guardians of the Galaxy, and 28 Weeks Later, Millennium Bridge has linked the city of London to the South side of the River Thames for almost two decades.

If you’re looking for a quirky Instagrammable place in the heart of London, then you’ve come to the right place. Walk across it to reach Shakespeare’s Globe, the Shard, and one of the best markets in London, Borough Market. 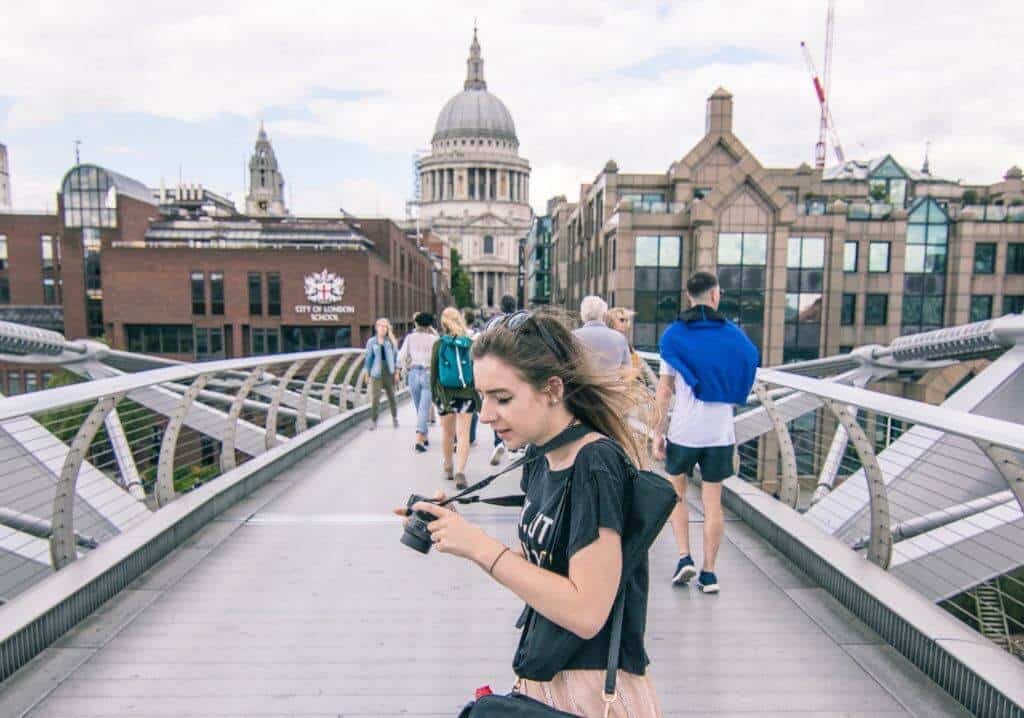 Although the original Shakespeare’s Globe Theatre sadly burned down during the 17th-century, its current incarnation was opened to the public in 1997. The new theatre is a faithful reproduction of the Elizabethan playhouse and regularly stages productions of Shakespeare’s works.

Nearby, you’ll find the Ferryman’s seat, set into the side of a chain restaurant. Though this worn piece of stone doesn’t look like much now, it was once used by the ferryman who would operate a water taxi service to-and-fro across the Thames, before there were any bridges in the area. Although no one knows the exact age of the seat, it may well date back centuries. 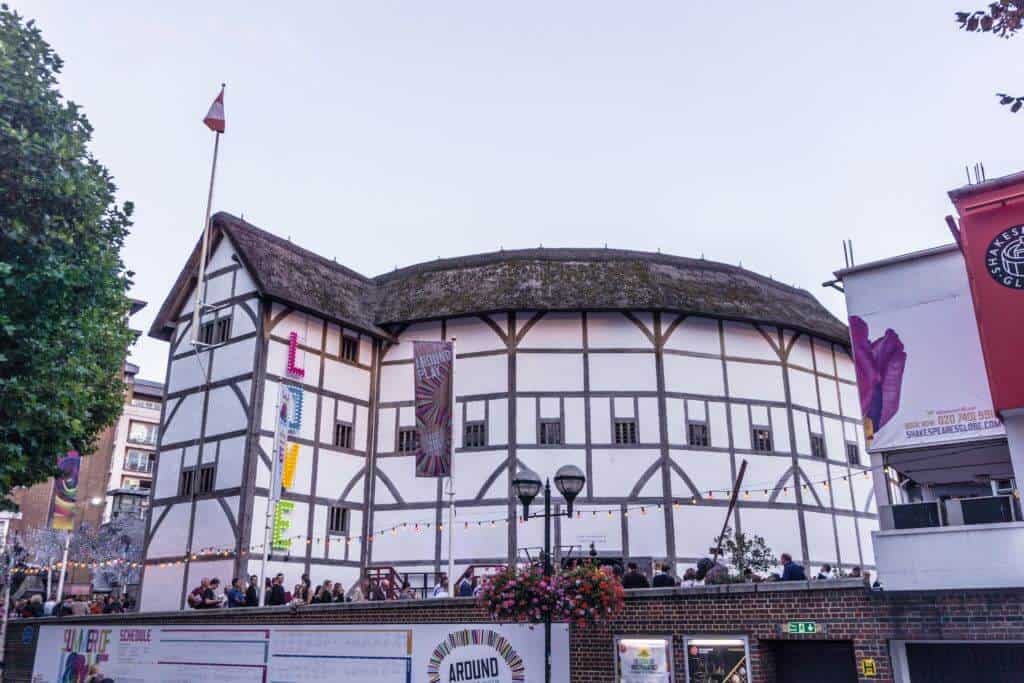 If you’re looking for some of the best food in London, then you need to look no further than Borough Market. Located in the shadow of the Shard, once the tallest building in Europe, the market sells both wholesale and retail food. Borough Market may well have existed for over a thousand years, and sells a whole range of hot and cold freshly prepared meals to both tourists and locals on a daily basis.

Map for your Self Guided London Walking Tour 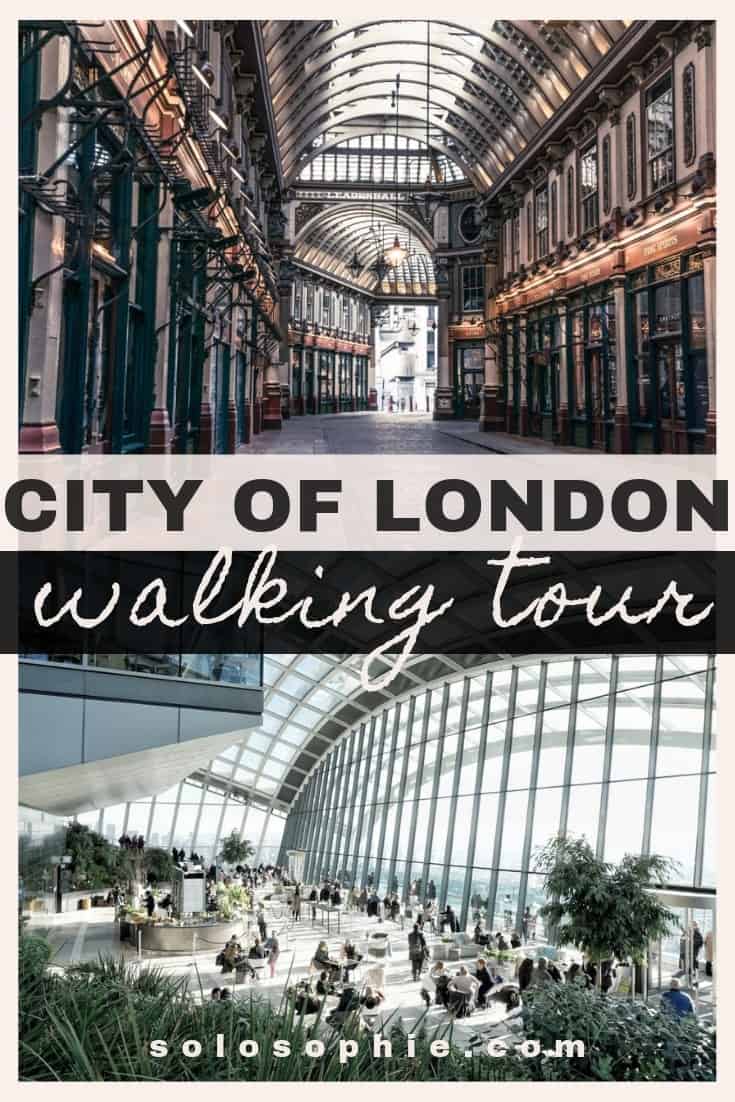 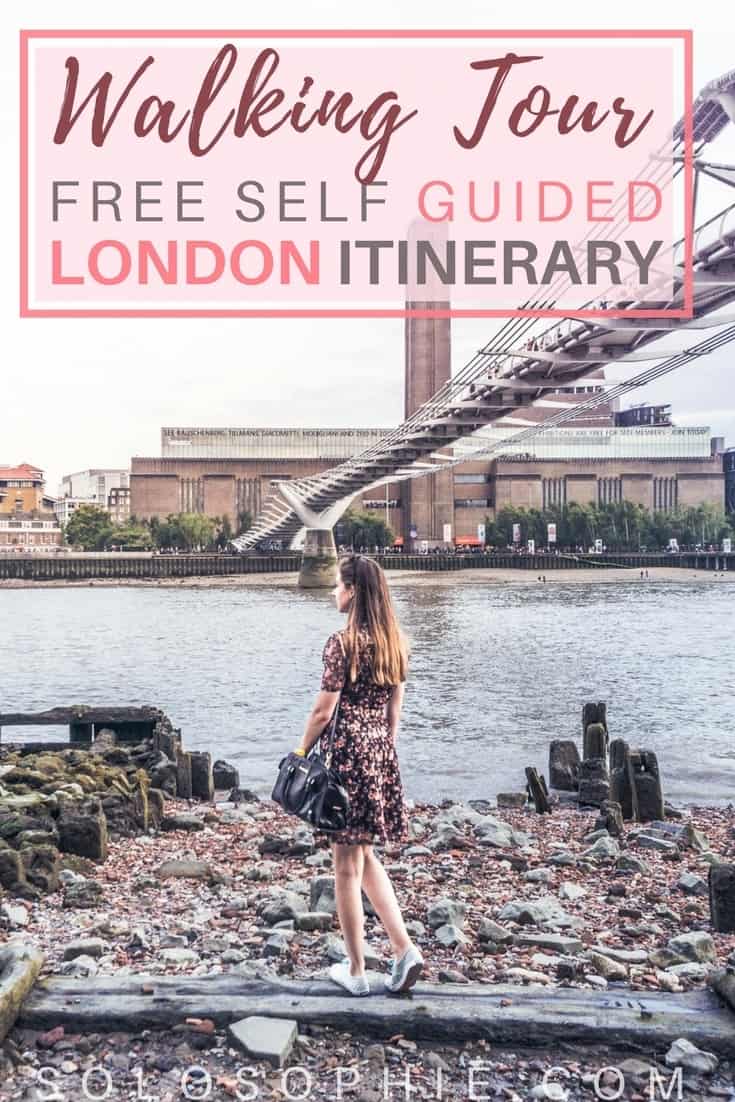 A Day in the UK: 18 Hours in London, England » Holly Hits the Road

[…] that visited as many major sights as possible. The blog that helped me the most when planning was The Self Guided Walking Tour: History and Culture Itinerary by Solosophie. I referenced and adapted this Itinerary to fit what worked best for […]

This is a really helpful guide! I'm planning my first trip to london and I'll totally be doing this, thank you!

What a great guide! I wish I'd had this before my first trip to London. Walking is such a wonderful way to see a city. Bookmarking for the next time!

This is a great guide! I remember walking some of these places myself with my city pass but it's been a few years. Will definitely visit some of your recommendations next time :)

I'm saving this for my next trip to London! Although I've walked along the Thames to Tower Bridge, I've not made it to many of the sights you mention in this post. I love making my own walking tours around the cities I visit though. I punch everything I want to see into Google Maps, organise them into some semblance of order and then hit go! :-)