If you’re looking for some of the most unusual things to do in Mexico City, then you’ve come to the right place! From lush parks to less well-known food markets, read on to discover a guide to hidden gems and secret spots in Mexico City… 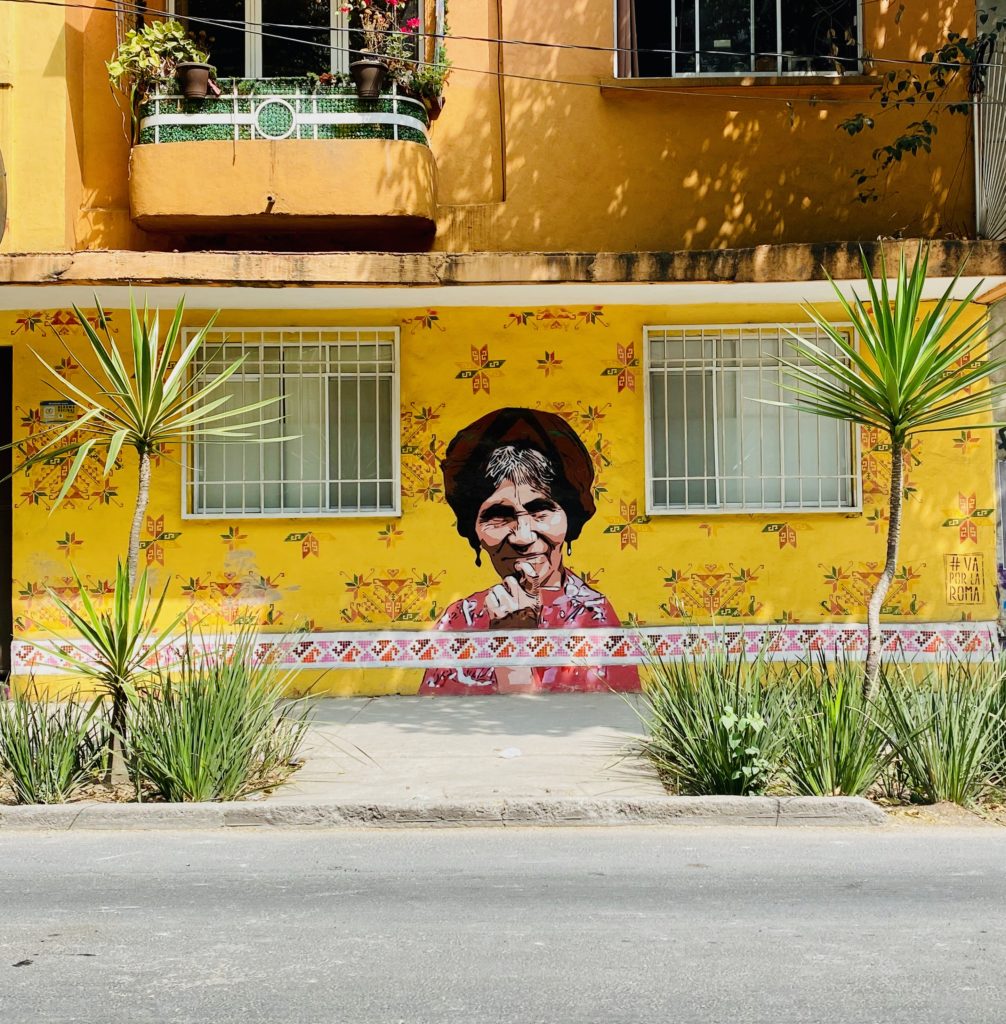 Whenever traveling to a new place there will be those sites on your “must see” list that everyone else goes to too. And that’s okay! We all want to see the Eiffel Tower, the Sydney Opera house or the Statue of Liberty.  These types of places hold significant meaning for us due to their history, cultural prominence and beauty.

And yet, we all want to visit those elusive “off the beaten trail” spots too; the spots that make us feel like we were the only tourists in the whole place. When I was in Mexico City, I stumbled upon some pretty great places that had the “am I the only tourist who knows about this?” vibe.

And while I’m sure that some of these places are very well known, for me, they turned out not only to be unexpected, but also very welcome treasures. So, if these places aren’t on your Mexico City wish list already then be sure to add them – and enjoy these 5 hidden gems and secret spots in Mexico City! 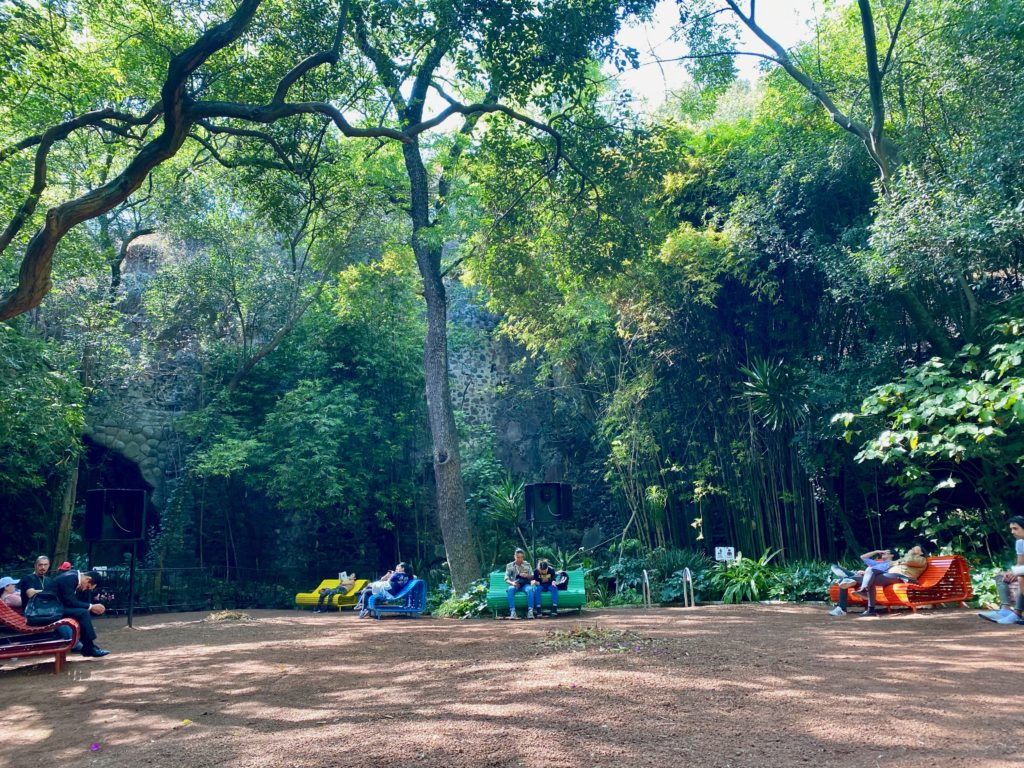 One beautiful feature of the park is the numerous walking paths that twist and turn throughout the park. It was by following one of these paths that I stumbled across Audiorama. Tucked into a shaded grove, stepping into Audiorama felt like being transported across time and space.

While the castle (just a few meters away) was teeming with tourists, Audiorama was hardly busy and felt like the still, calm center in the eye of a storm. Loudspeakers play music, everything from classical to traditional Mexican folk music, and listeners lounge on brightly colored benches. Sit back, close your eyes and enjoy the music. You won’t be the only one but Audiorama will sure make you feel special. 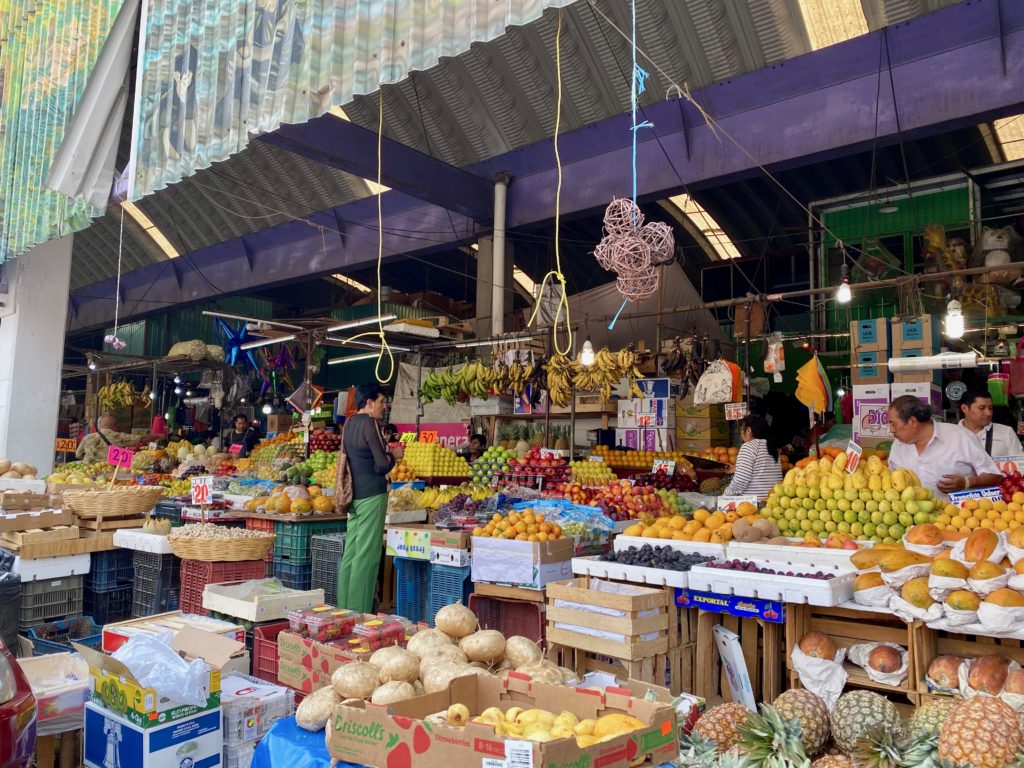 Mexico City is famous for its mercados, or markets. These markets are like little cities unto themselves – you can find everything from flowers to food to household goods and gifts. There are some very famous markets in Mexico City, but Mercado Jamaica is where locals go.

It will be important to take a car or public transportation to Mercado Jamaica, as it is located in a district unsafe for tourists to walk through. However, the market itself is a beautiful expression of the bounty Mexico has to offer.

The vendors are all incredibly kind and (rightfully) so proud of their amazing products. There are dozens of floral stands where roses are the main attraction. Freshly picked roses at Mercado Jamaica will cost not even a fraction of the price for the same flowers at home.

There are also some food vendors, my favorite being an older woman who sells corn, traditional corn soup and corn salad eaten out of the husk. Apparently she has worked at the market for over 30 years, providing some of the best comfort food I have eaten to passers by and other merchants. Go to Mercado Jamaica to pick up your fresh fruits, your just fried chicharron or flowers for a special someone. 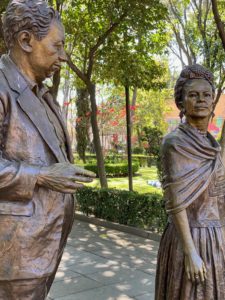 Plaza de la Conchita is a simple plaza located in the Coyoacan neighborhood of Mexico City. Probably most famous for the church that sits in the square, Plaza de la Conchita is just far enough off the beaten path that it becomes a lovely place to rest and reflect. The church is an eighteenth century chapel, considered to be one of the oldest in Mexico.

Just off the square is also reportedly the residence of Hernan Cortes, the Spanish conquistador who’s invasion led to the fall of the Aztec Empire. Plaza de la Conchita is also right next door to the Frida Kahlo park, with a beautiful, life-like statute of Frida and Diego.

While in Mexico City I noticed the plazas were overlooked by tourists, who seem to generally favor flashier sites of cultural significance. However, I urge you to take the time to spend some time in a plaza and just observe the residents going about daily life in Mexico City.

Mercado Coyoacan is one of the more famous markets in Mexico City due to its close proximity to the Frida Kahlo museum. The mercado is busy and with tightly packed stalls, it can feel like a labyrinth of vendors. The mercado is geared toward tourists, and no doubt if you might be persuaded to part with more pesos than you originally planned.

All that shopping will no doubt leave you hungry, so where to eat? In the center of Mercado Coyoacan, you’ll find Tostadas Coyoacan, a food stall with diner counter style seating and bright yellow menu boards alerting your arrival at the best food stall in all the market.

While not technically hidden, or even secret for that matter, Tostadas Coyoacan makes the list because it’s the favoured food stall of locals and easy to miss in the crowded Mercado Coyoacan. The best things on the menu according to the locals (and after eating) are the chicken tinga tostadas paired with the Jamaica juice. 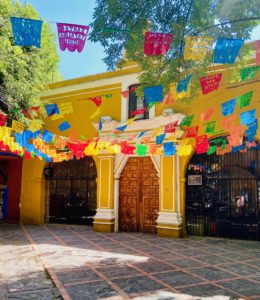 A small square in a quiet neighborhood not far from the Coyoacan district, Parque Santa Catarina hosts one of the most charming churches in Mexico City. Bright yellow with beautiful papel picado, or tissue paper banners, the church felt like a ray of sunshine after a long bike tour.

I highly recommend biking around the various neighborhoods of Mexico City – it’s such a great way to see the city and with many city bike stations it’s easy too. The square has lovely benches and big trees for shade. I particularly enjoyed having a cup of Atole, a warm cinnamon drink, from a cafe off from the square while resting.

Enjoyed reading about some of the best secret spots in Mexico City? Pin this article now, read it again later: 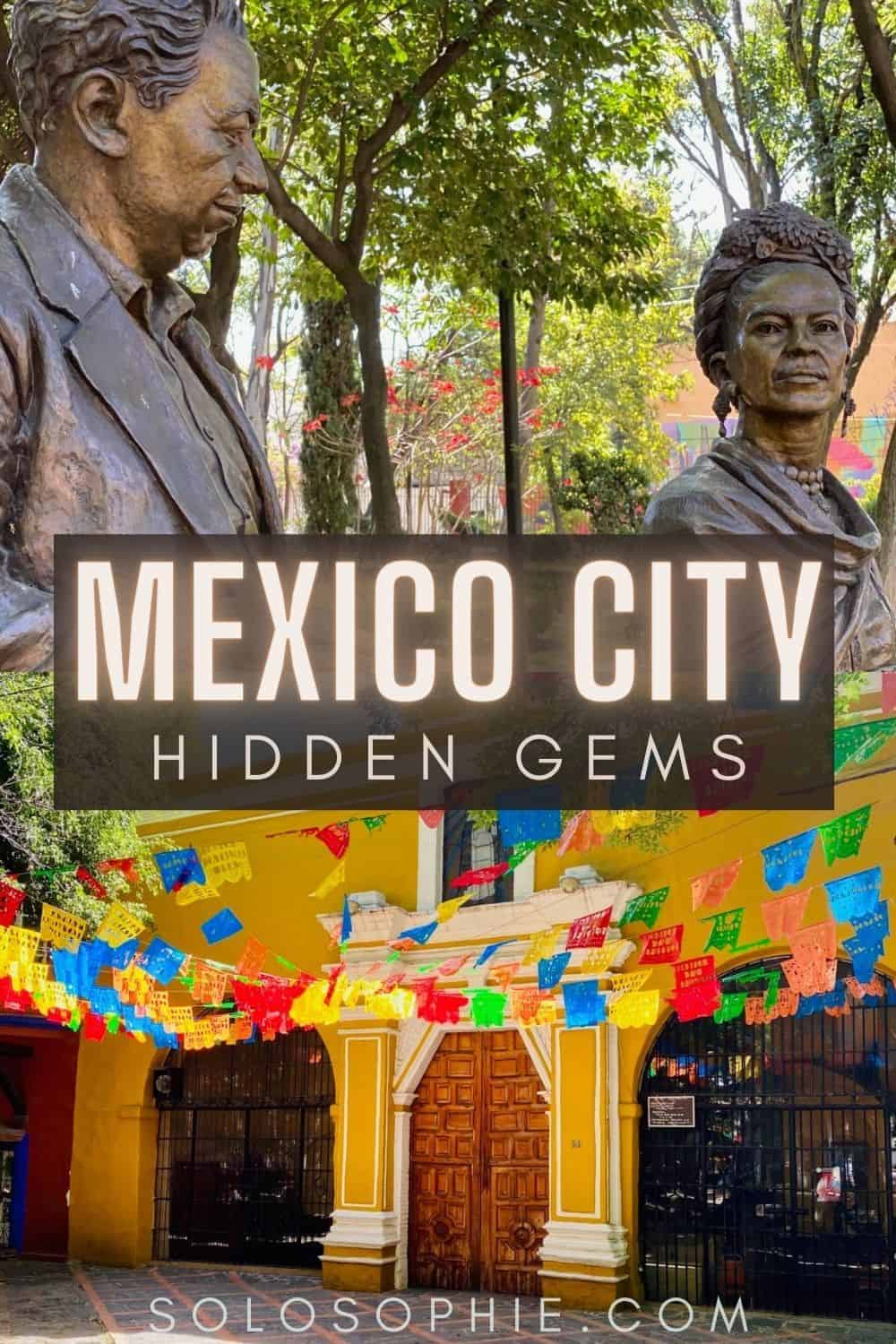 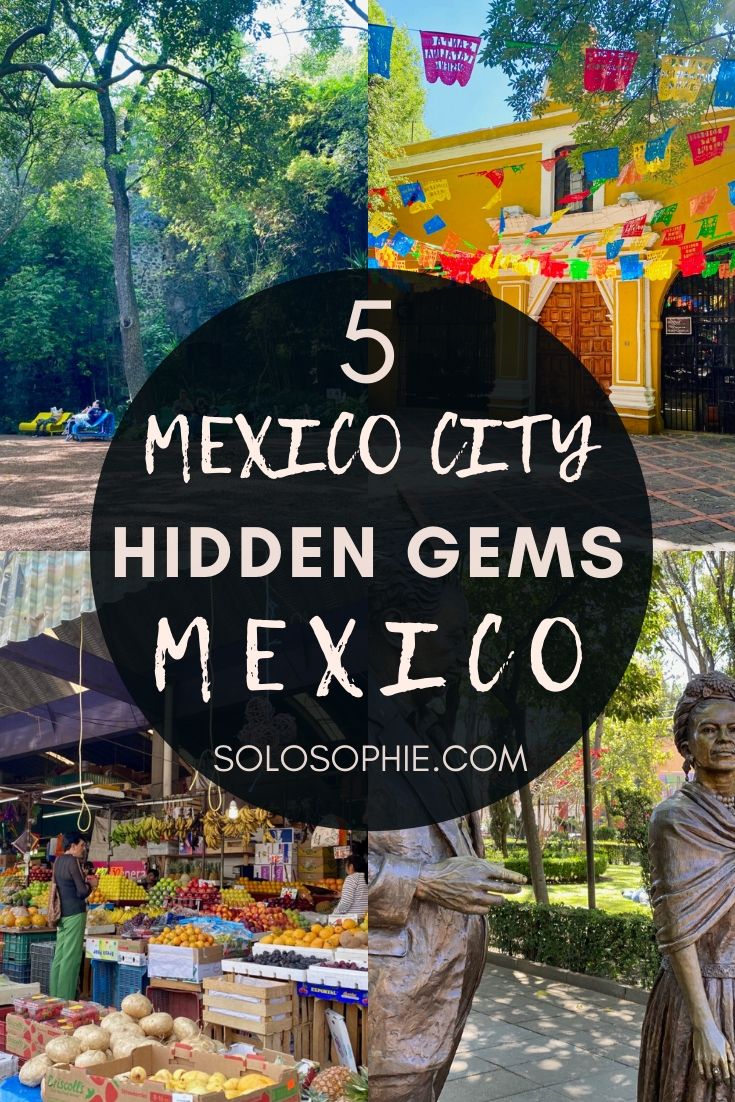 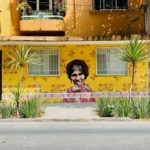 How to Spend A Long Weekend in Mexico City (Guide & Tips) 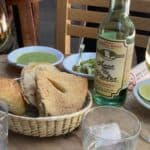 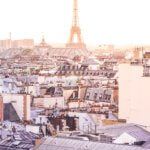 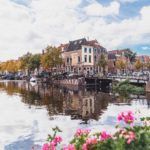