With little more than an old school map and a few friendly locals from whom to ask directions, I set off to explore this historic part of town… Here’s your ultimate guide to the best things to do in Kaiserswerth, Germany.

When I first stepped off the U79 train from central Düsseldorf, I had no idea what to expect. I’d heard that Kaiserswerth was the oldest area of Düsseldorf, but beyond that, I had little clue as to what I’d find there. However, I was pleasantly surprised by just how beautiful Kaiserswerth is, not to mention the plethora of activities there…

How to visit Kaiserswerth from Düsseldorf Centre

The train ride to Kaiserswerth takes around twenty-five minutes from the Hauptbahnhof (the central train station). Departures are roughly every twenty minutes to half an hour and so access to this part of town is fairly easy, though you’ll need to plan your timings in advance so as to fit in as much sightseeing as possible!

You’ll need to take the U79 towards Duisburg Meiderich Bf and the Kaiserswerth station is Kittelbachstraße. Public transportation in Düsseldorf is included in the DüsseldorfCard, which also includes discounts to many of the city’s major attractions. Purchase your Card here.

From the station, the walk into the historic part of Kaiserswerth is around another ten minutes by foot. Also, I’m going to be honest with you: wandering around the town, I just couldn’t stop snapping photos!

Every inch of this district was just so beautiful and oh so very Germanic in terms of its architecture. Alternatively, if you’re looking to explore Düsseldorf in another way, then this 2-Hour Segway Tour of Düsseldorf sometimes goes through Kaiserswerth.

17th-Century house fronts, the ruins of a once grand palace and the first hospital Florence Nightingale worked in. You’ll find all of this and more in Kaiserswerth. Quaint cafés sit side by side with altbier gardens (a regional speciality).

Literally, everywhere is packed with a whole load of history. In the springtime, Kaiserswerth is one of the best places in Düsseldorf to enjoy the best of beautiful cherry blossom! As early as the 8th Century, the area which Kaiserswerth now occupies was inhabited. A monk by the name of Saint Suitbert chose the region to build his Benedictine Abbey.

Unfortunately, the abbey stood for less than ninety years before it was destroyed. In the following centuries, people continued to live at Werth but little changed until the arrival of Barbarossa. Although Kaiserswerth was once a district in its own right, the area has since been absorbed into the fabric of Düsseldorf.

Things to see and do in Kaiserswerth

In the 12th century, Frederick I, Holy Roman Emperor, also the ruler of Germany decided that Werth would be the perfect location to build his palace. The name of the town was changed to ‘Kaiserswerth’, the addition of the ‘Kaiser’ signifying that the emperor had chosen to put down roots in the area.

Often referred to as one of the medieval era’s ‘greatest’ leaders’, Barbarossa lived in Düsseldorf during the 12th-century. The Kaiserpfalz (literally ‘imperial palace’) is located on the fringes of the town, overlooking the mighty river Rhine.

Today, many locals hang out in a nearby altbier garden, and even more cycle along the river at this point. Of course, what attracted me most to this district was the promise of a ruined castle. In some places, the walls are up to four meters thick!

Unfortunately, during the 19th and 20th-centuries, the castle was used as a kind of ‘ready-made’ quarry for those wishing to get cheap and easily accessible stone to build their houses.

As a result, many of the houses and buildings around Kaiserswerth are constructed of stones taken from the former palace! Today, the ruins are owned and maintained by the City of Kaiserwerth.

The large and imposing church sits a mere few hundred metres from the once grand palace of Barbarossa. The basilica is named after Saint Suitbert, founder of the first abbey in the area.

Parts of the current church were constructed as early as the 11th-Century, though much of the building was renovated in the 18th century. It is also here where the remains of Saint Suitbert lie.

For a greater and more in-depth look at the history of the area, the district’s museum is open from 2-6 PM on Saturdays and from 11 AM- 1 PM and 2 PM- 6 PM on Sundays. Featuring a series of displays which focus on the history of Düsseldorf, this cultural space is incredibly well-reviewed.

One of my favourite things about German is that many of the words describe the location, place or thing exactly. For example, ‘Krankenhaus’ literally means ‘sick house’ but would generally be translated as a hospital.

It is in a Kaiserswerth Krankenhaus that Florence Nightingale first started working. Trained under Theodor Fliedner, in 1851 Nightingale passed her nursing exams. A few years later, she was deployed as a nurse during the Crimean War.

Whilst away in Turkey, she saved hundreds of lives and improved hospital sanitation. She demonstrated that practising clean hygiene practices saved lives and her techniques were implemented throughout the world. There is no telling how many lives she managed to save…

Thanks to its many cobbled lanes and vintage houses, in truth its Kaiserswerth Markt (the main square of the historic district) that truly gives the area its village feel. Much of the action in this area of Düsseldorf happens around the Markt Square, with cafés, bars, and restaurants serving up traditional German fare spilling out onto the streets.

Where to eat in Kaiserswerth, Germany

With many cobbled lanes throughout Kaiserswerth, you’ll want to wear comfortable walking shoes. Furthermore, though most people speak English, you’ll want to learn a few words of the local language, in this case, German. Bring along a simple phrasebook like this one to help you get by.

Next, Germany, like much of mainland Europe, uses type C and F. This means that if you’re travelling from the US, Canada, the UK, and many other countries, then you’ll need to purchase a travel adaptor. This all in one adapter contains USB ports and works with several different plugs.

If you’re looking for an escape from the hustle and bustle of Düsseldorf, then you can even book to stay in this historic area of the city. This way, you can enjoy the Kaiserswerth castle, ancient streets, and waterside cafés at your own leisure. Check here for the best accommodation in Kasiserswerth.

If you’re not sure where to start when it comes to Kaiserswerth hotels, then here are a few particularly well-reviewed recommendations. For a luxury stay in this historic district, you should book to stay in none other than the four-star Hotel MutterHaus Düsseldorf. For a more wallet-friendly and budget option, Hotel Am Schwan features amenities such as WiFi, TVs in rooms and good breakfast options.

Enjoyed reading about the best things to do in Kaiserswerth? Pin it now, read it again later: 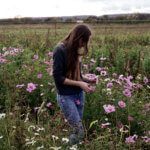 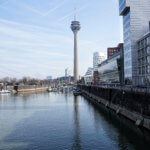 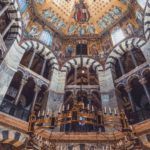 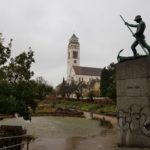 Village in the City: Kaiserwerth | East Side Pigeon