Situated in the very heard of Europe, the landlocked country of Luxembourg is sandwiched between Germany, Belgium, and France. Filled with castles, quirky towns and oodles of history, you can’t go wrong by dedicating at least a long weekend exploring the last remaining Grand Duchy in the World. But if all that hasn’t already got you convinced… Here are 10 very good reasons to visit Luxembourg!

#1 ALL of the Luxembourgish castles

If you give yourself just one very good reason to visit Luxembourg, make it all of the amazing castles the country has to offer. From Renaissance Style Châteaux to Medieval Ruins (complete with torture chambers), there are plenty of amazing castles, just waiting to be discovered…

#2 There’s plenty of stunning countryside to walk in

Unless you’re like me (and there’s an abnormally hot heat wave when you visit- and as a result, you end up walking in 40 degrees+!), Luxembourg is perfect for hiking. Whether you love gentle lakeside strolls, or treks up mountains, the country has plenty of varying terrains to explore.

During your stay in the country, I recommend basing yourself in Luxembourg city. From there, it’s easy to take day trips from the city to the rest of the country. After all, it’only about three hours to drive from one end of the country to the other!

Even if you don’t have access to a car, then public transportation is fairly good in the high season and buses run from town to town on a regular basis.

#3 There’s plenty of history to discover in Luxembourg

From all of Luxembourg’s museums to the fascinating series of events which led to it becoming the only Grand Duchy in the world, there is no shortage of history to learn about in Luxembourg. Whether you love architecture or art, head to Luxembourg to discover oodles of history.

#4 There are SO many museums all over Luxembourg

And while we’re on the subject of history, for such a small country, Luxembourg certainly packs in plenty of museums, galleries and other cultural highlights. For example, in Luxembourg City itself, you’ll find the seven main museums of the city are grouped together along a street conveniently named ‘Museumsmile’.

Stroll along this street to discover highlights such as natural history and contemporary art. As for the rest of the country, many of the larger towns have museums, and plenty of the castles have been transformed into cultural centres.

One of the very best cultural transformations of a castle comes in the form of Clervaux, which now serves three different purposes. In the former Château, you’ll now find a model museum of castles in Luxembourg, a museum dedicated to WWII and a photography exhibition entitled ‘the Family of Man’.

#5 Luxembourg is the only Grand Duchy in the World

I know I said it already, but It’s worth mentioning (again) that this really is the only country in the world to remain as a Grand Duchy, the Duchy of Luxemburg (note that depending on the language, there are various different spellings for the name). The Current Grand Duke’s name is Henri and he has residences spread throughout the country. Finland and Lithuania were also once both Grand Duchies.

#6 The city of Luxembourg itself is worth visiting…

Here, you’ll find plenty of museums, cafés, history and cobbled lanes to meander along. In saying that, of course, the rest of the towns, villages, and settlements that Luxembourg are well worth visiting!

Between the oldest town in Luxembourg, founded in the 8th-century Echternach, and the cute little village of Larochette, there’s no shortage of beautiful towns in Luxembourg!

From the architecture of medieval castles to the modern architecture that characterizes many of the museums and other public buildings in the country, there’s a whole range of styles and eras to be discovered…

#8 There are absolutely loads of languages spoken (including Luxembourgish)

While I was in Luxembourg, I was surprised to learn that it wasn’t at all rare to speak five, six, or even seven languages! Four seemed to be the norm and my two paled in comparison with these statistics… Luxembourg even has its own language, Luxembourgish. (Read more: useful Luxembourgish words and phrases)

#9 Luxembourg is perfect for a weekend getaway

And, as if you needed any more reasons to visit Luxembourg… it’s perfect for a weekend getaway! The city’s position in the heart of Europe, as well as its good connections via rail and air to many other European destinations, making it the perfect place to enjoy a long weekend. And, if you’re wondering how to spend your time, here’s how to spend a long weekend in Luxembourg!

You may not know this, but Luxembourg has plenty of its own iconic and national dishes, as well as plenty of international cuisine from around the world. While you’re in the country, make sure to check out the Kniddelen (a kind of dumplings- in some places, you can also find vegetarian versions of the dish).

There are also many of the chocolates for sale in the many boutiques, and if you’re a meat eater, Judd mat Gaardebounen (smoked collar of pork served with broad beans). Fun fact: Luxembourg has the highest density of Michelin Star restaurants in the world!

Enjoyed reading about the best 10 Reasons To Visit Luxembourg? Pin it now, read it again later: 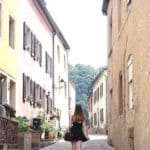 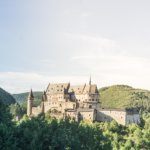 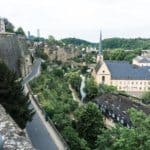 How to Spend Three Days in Luxembourg: A Long Weekend Travel Itinerary 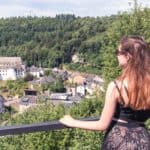