Few French Châteaux are as impressive as that of Chantilly. Its architecture, size, and its large collection of artworks are all a testament to the castles rich history, as well as that of the surrounding landscape.

Set in the middle of its own moat, a fairytale château is located just a half hour train ride from central Paris. It’s here that you’ll find a lush green forest, a town of the same name, a Renaissance hamlet… and one of the largest art museums in France.

Editor’s note: If you’re looking to save time during your Paris to Chantilly day trip, then you’ll want to consider booking a skip-the-line ticket in advance of your visit. Purchase the ticket and find more details here. 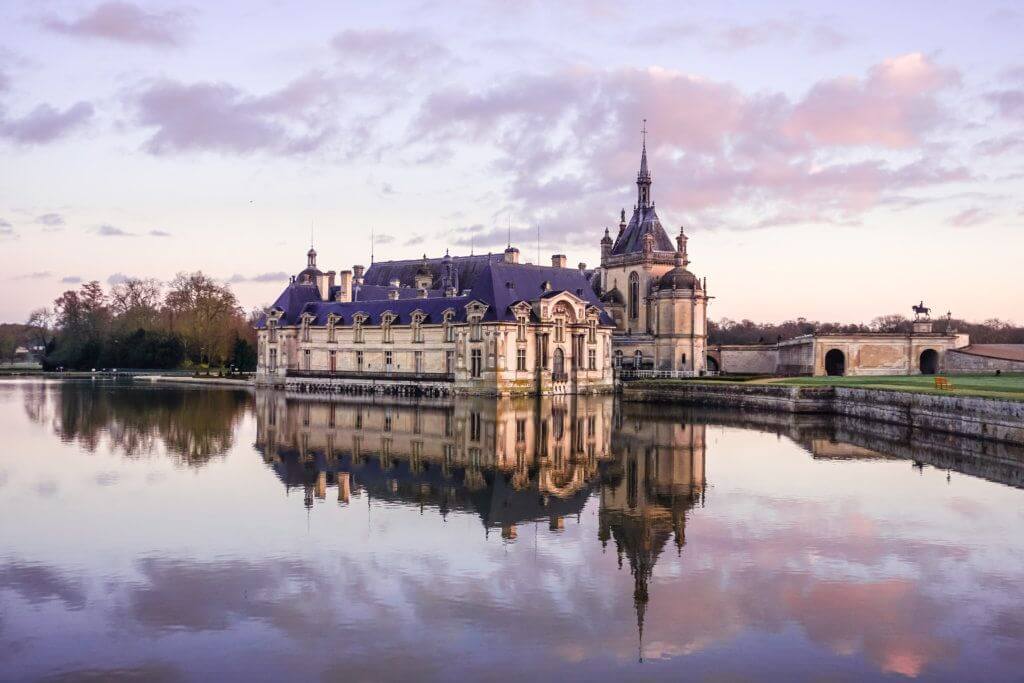 Where is Chantilly and why should you visit?

Chantilly is a cute little town located near Senlis in the Picardie region of France and is upposedly Chantilly is where Chantilly lace and cream come from (although no one has ever been able to properly verify this). The town also happens to be home to a castle of the same name- one of the most picturesque fairytale castles in France.

The Château itself was never actually home to royalty, but to cousins of the royal family. Today, the site comprises of a 16th Century building together with a 19th Century one. There is a whole load of things to see and do at and around Chantilly. From English gardens to the hamlet that inspired Marie Antoinette’s Hamlet at Versailles, it would be easy to spend a day getting entirely lost within the castle’s history! 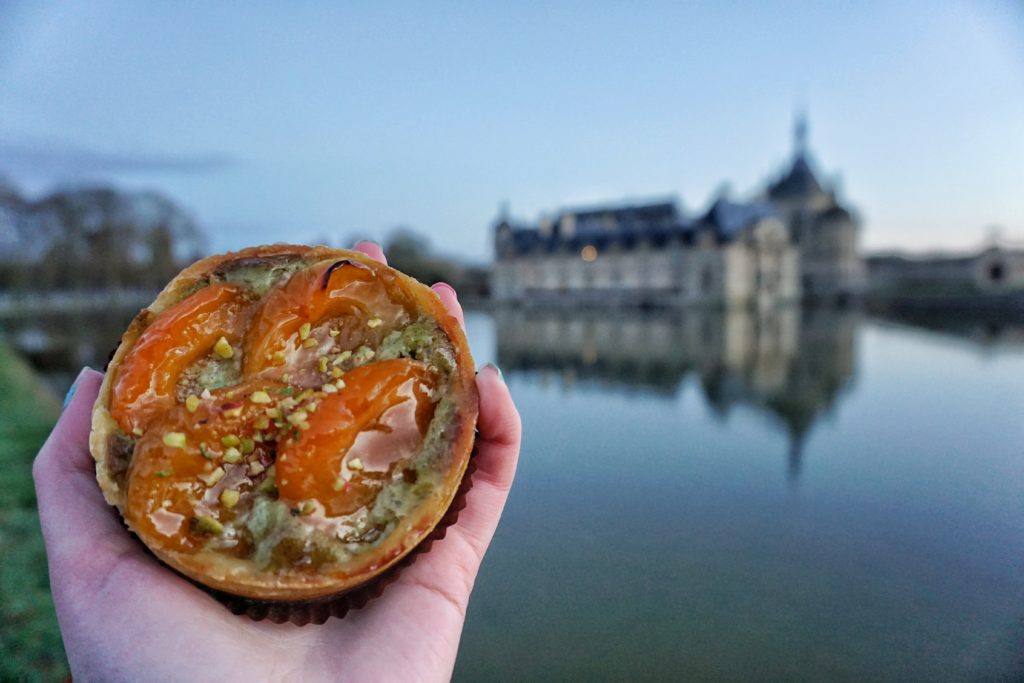 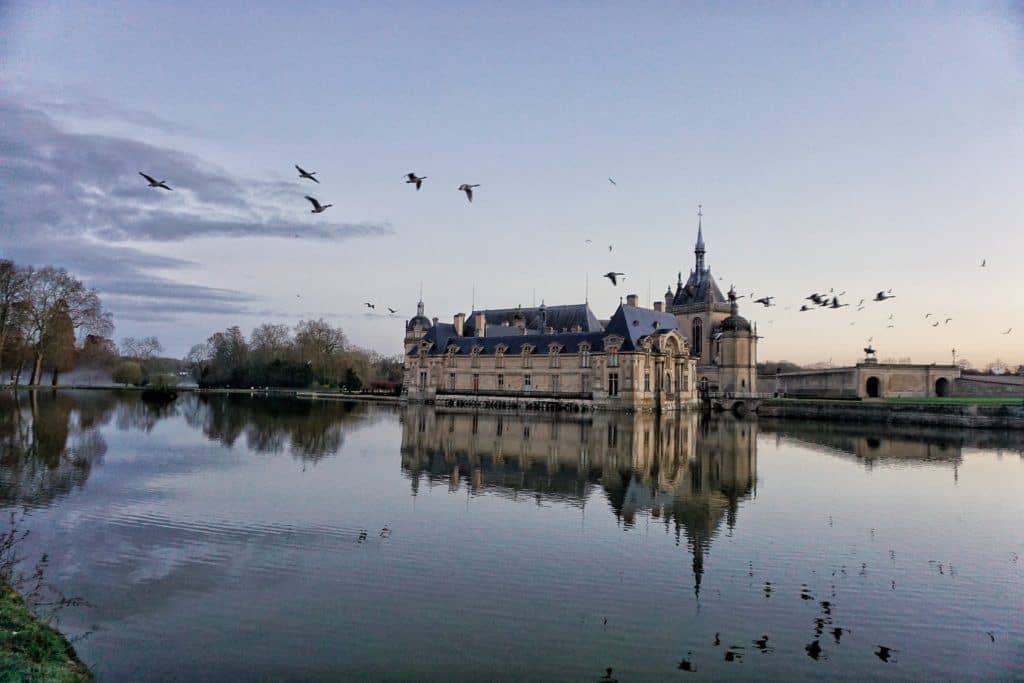 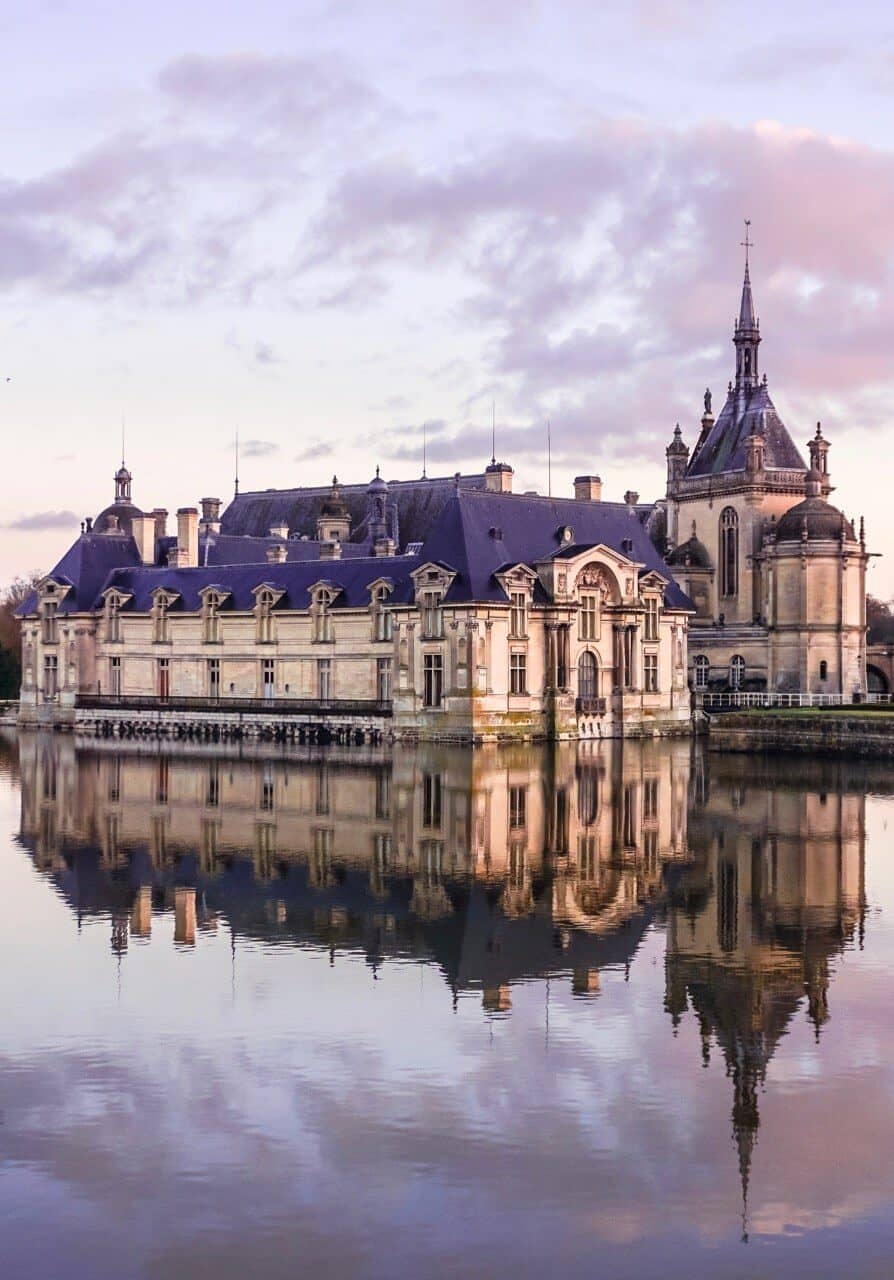 A History of Chantilly and Château de Chantilly

The history of Château de Chantilly dates all the way back to the early 1500s when the Montmorency family constructed the original castle. Built between 1528–1531, a smaller ‘petit château’ (which is still considerably larger than my house!) was constructed in addition in 1560.

By the mid-17th-Century, the château had come into the possession of the Orléans family, who had inherited the castle by marriage. Sadly, most of the original structures dating back to the 16th-Century were destroyed during the French revolution. 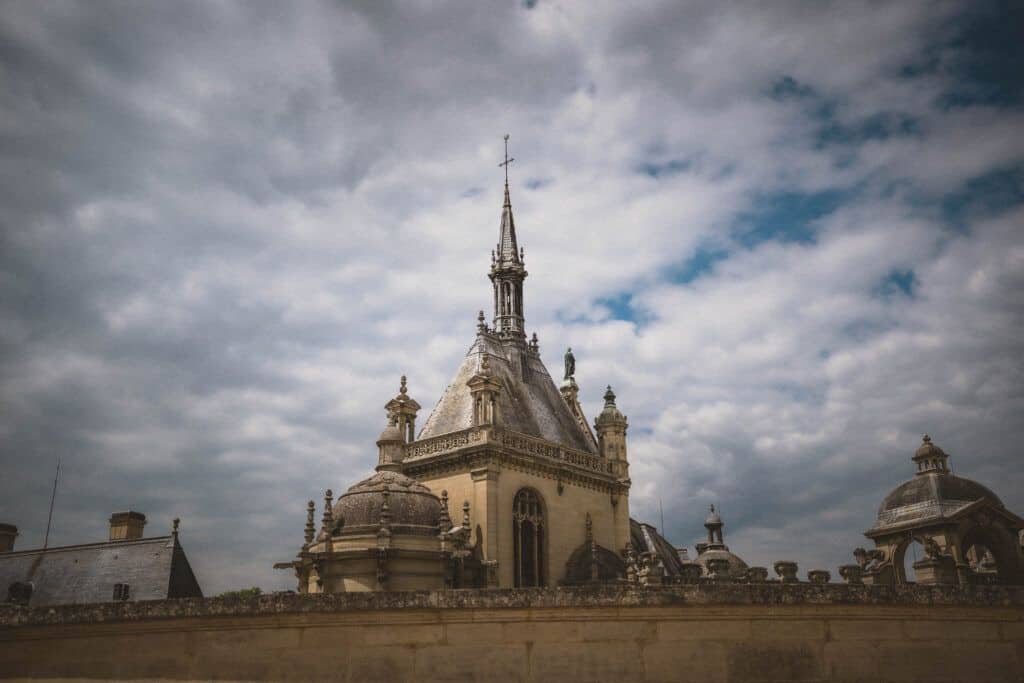 During this time, the entire future of Château de Chantilly was at stake. Somehow, the Orléans family managed to retain the Castle. Following the revolution, they did their best to update the castle and repair much of the damage that had been caused by looters and the like.

However, it was not to be and the Castle was repossessed by English bank, Coutts, from 1853 to 1872. By the time it came back into the possession of the Orléans family, it lay almost entirely in ruin. As a result, the Château was almost entirely rebuilt by Henri d’Orléans from 1875-1882, giving the mansion house the appearance it has today. 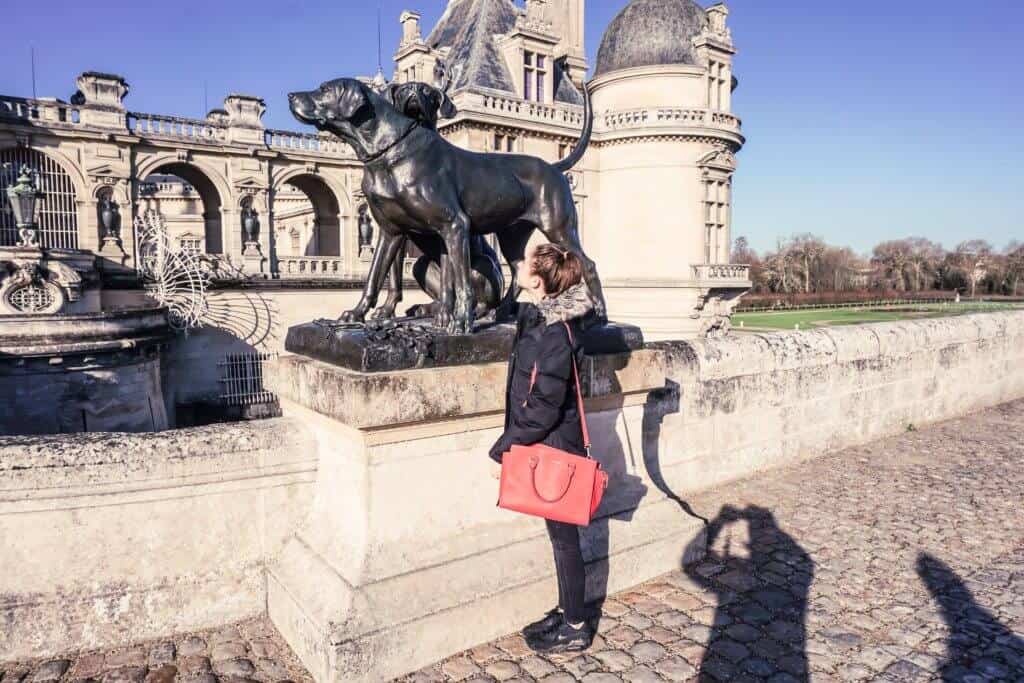 Things to do in Chantilly

The palace itself is the epitome of old meets new; with the majority of buildings hailing from two distinctive eras. The château sits in a fairytale-like manner in the very middle of its own moat. Today what you see is the amalgamation of centuries worth of history. While the original ‘Petit Château’ still remains, the original 16th Century mansion has since been replaced with a grander, Haussmannian style castle. 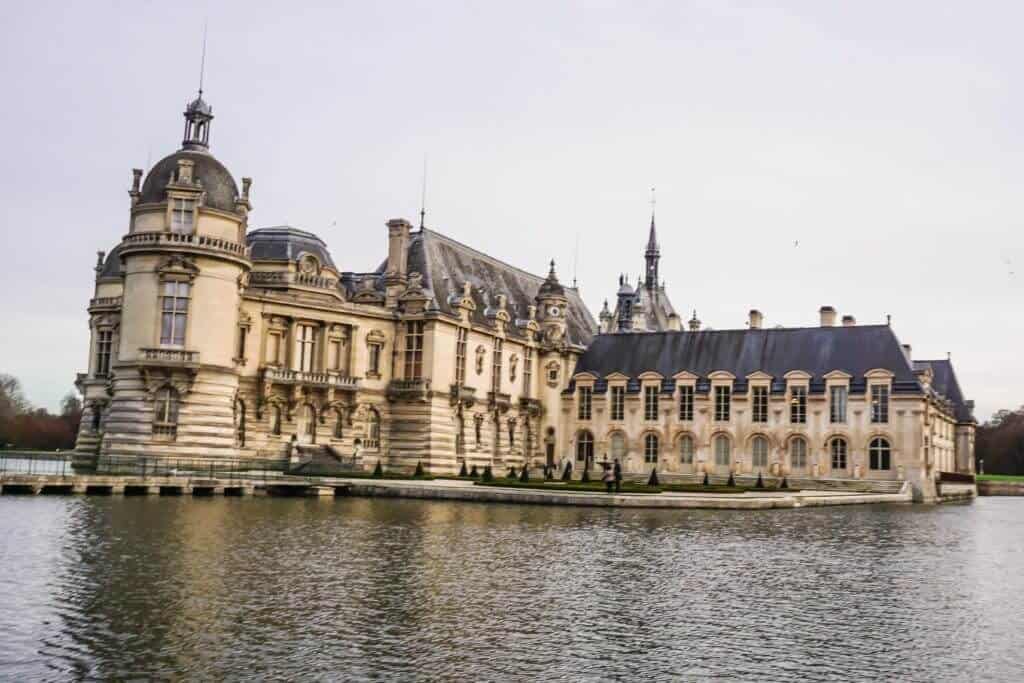 Situated within the castle itself lies the second largest art collection in France (only after the Louvre). If you choose to visit the château, then a visit to the museum is included in the ticket price. Located in a set of Renaissance architecture rooms, the collection comprises of room after room of priceless artwork.

The collection consists of predominantly French and Italian Old Master paintings. And particularly important pieces include three paintings by Raphael (yes, really!), as well as three paintings by Fra Angelico. Altogether, the museum houses 2500 drawings, sculptures, vintage photographs and 1500 manuscripts, among other things. If you love art, then you simply have to see Musée Condé! 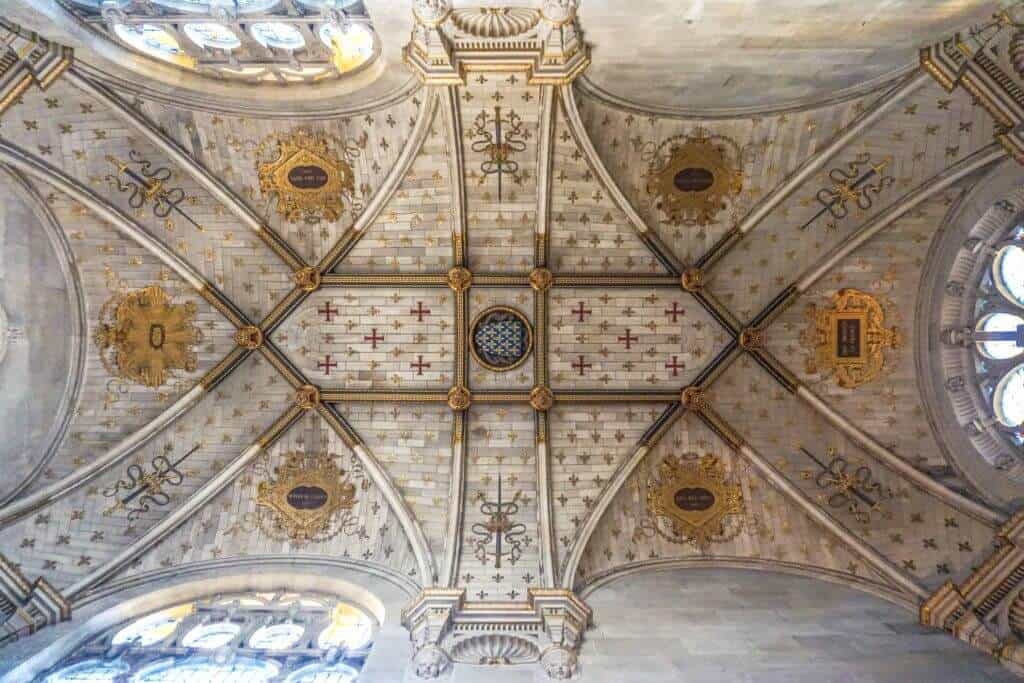 Gallery of Psyche at Chantilly

If I had to choose a favourite piece, one of my favourite highlights of the museum is the gallery of Psyche, a set of 44 stained glass panels dating back to the 16th-century. The set of medieval glass tells the story of Psyche.

The legend was first recorded in the 2nd Century, the myth goes a little like this. There was once a beautiful princess named Psyche. She was so beautiful that Aphrodite herself was jealous of the girl’s beauty.

In her anger, Aphrodite commanded Cupid to force Psyche to fall in love with a hideous man. However, Cupid himself fell in love with her and hid her away. To conceal his true identity, he instructed her never to look at his face.

However, after being tricked by her jealous sisters, Psyche momentarily gazed upon the face of her lover, Cupid, and he abandoned her as a result. Psyche searched for him all over the world, even traversing into the underworld. Ultimately, the couple found their way back to each other and lived happily ever after. 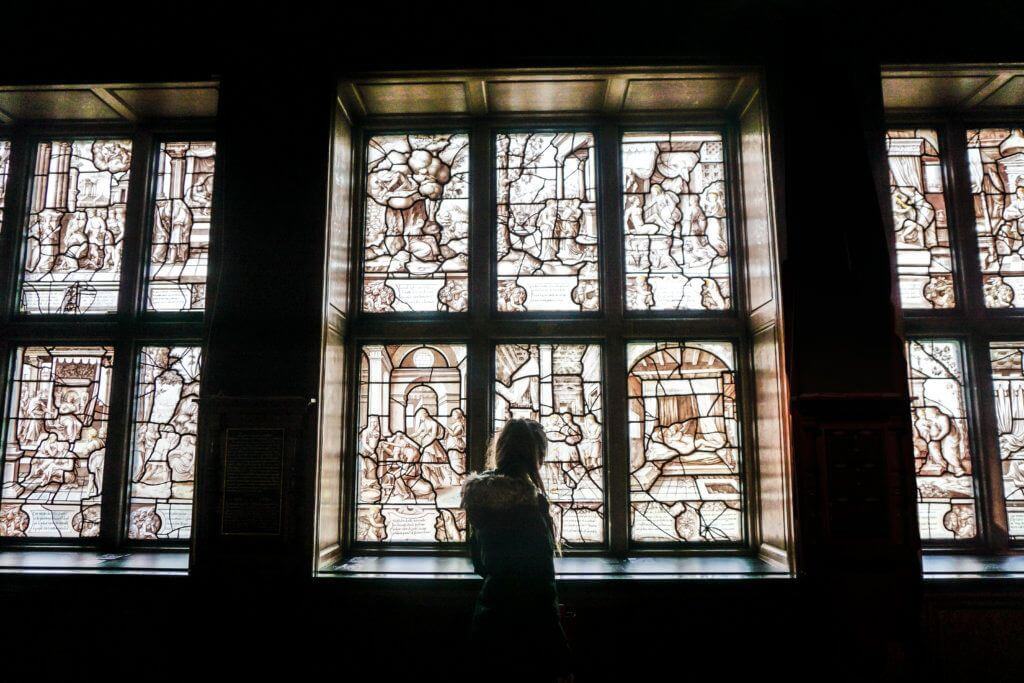 The Gardens at Chantilly

Designed by critically acclaimed landscape designer, André Le Nôtre, the gardens are definitely worth visiting if only to enjoy a gentle stroll around. The gardens are sumptuous and include many features that were deemed integral to a French Formal Garden in the 17th Century.

There are water features, plenty of statues, manicured hedges (still kept in pristine condition and perfect for architectural-style photos!), and pavilions. Around the gardens, there’s plenty of wooded areas where you can really escape from modern life (even if it’s just for a couple of hours). 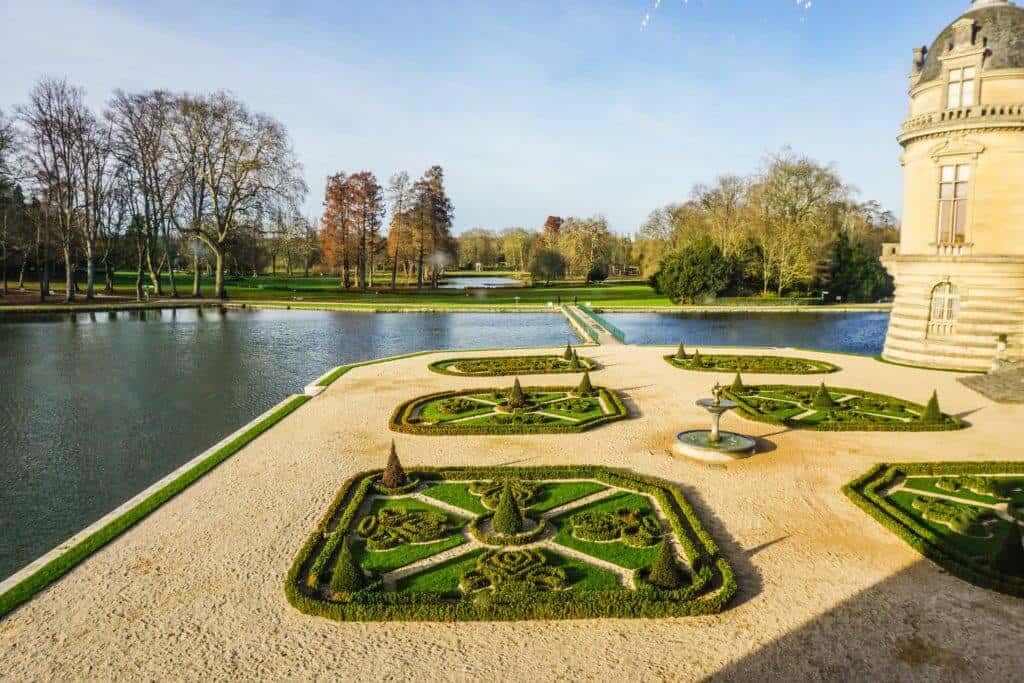 Set deep in the gardens of Chantilly, around a kilometre from the château, you’ll find the Hameau de Chantilly. The small hamlet consists of seven houses which are built in a lovely rustic style and were always intended to be showpieces. They were built as an 18th Century folly, intended to be walked around and enjoyed from afar.

The Prince of Condé had the cottages designed by Jean François Leroy, each with its own theme. There’s a ‘parlour’, ‘billiard room’, ‘dining room’, ‘stables’, ‘dining room’, ‘kitchen’, and ‘mill’. They were once lavishly decorated on the interior, which amazed guests as the exteriors were so simple.

And all the cottages were built purely as entertainment. It’s even rumoured that Marie Antoinette herself based her little ‘farm’ at Versailles (where she used to dress up the animals in order to play ‘farm’) on the little hamlet located in the gardens of Chantilly. 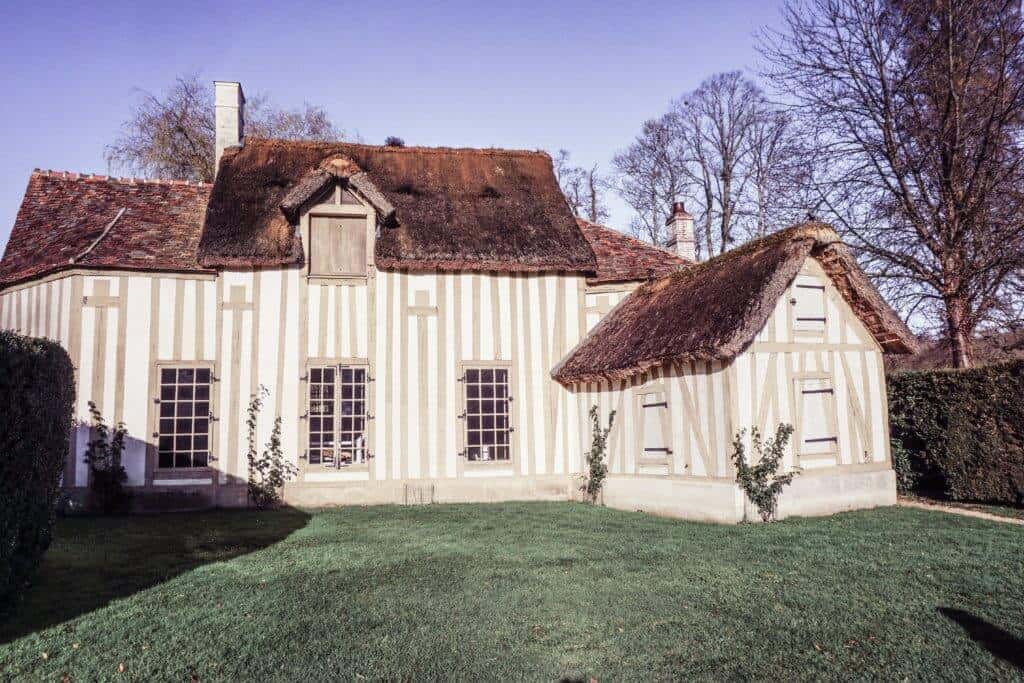 See the sunrise over Chantilly Lake

Although I’m generally not a fan of early mornings (who even is?!), there’s something incredibly rewarding about getting up for sunrise. Although everyone can be there for sunset, you have to make an extra effort to be present for sunrise- particularly when it’s before 6 A.M! The rewarding sunrise at Chantilly was no exception to this rule…

The reward following putting in the extra to get up a couple of hours earlier soon became apparent when the sun hit the clouds, the sky turned golden and candy colours danced across the skyline.

Tiredness and cold hands were quickly forgotten, amidst the real life fairytale playing out in equally real time. The lake had turned into a giant shimmering mirror, the fantastic architecture of the castle becoming more and more apparent by the minute.

Chantilly Cream and Lace: Do they actually originate in France?

Chantilly has two extravagant exports: Chantilly cream and Chantilly lace, although it’s not entirely proven that either one of these things actually came from the little French town. The story of Chantilly Cream is steeped in legend and dates all the way back to the time of Head Chef Vatel, who worked in the kitchens at Château de Chantilly.

Vatel was a renowned French chef who was known for his French sweets skills in the 17th century. It’s said that during a great banquet, for which he had to cater to many people, he realized that he just didn’t have enough cream. Rather than fret about it, or bother his employer, he simply whipped the cream, creating more of it and making it light and fluffy. And thus, Chantilly cream was born.

Sadly, historians now claim that this probably isn’t true. Recipes for whipped cream existed long before Vatel’s time in the 17th century and so Chantilly cream most likely doesn’t actually originate in the little French town. However, wherever Chantilly Cream was created, it’s simply delicious (and well worth a try). Sweetened with vanilla, it’s whipped to perfection and makes the perfect accompaniment to any dessert.

Meanwhile, it’s more certain that Chantilly Lace actually originated in the town. Chantilly Lace is a type of finely made bobbin lace that originated at some point during the 17th-century. It’s characterised by its ornate patterns and fine detail. The lace is still produced today.

Despite its easy access from central Paris and good train links, Chantilly is not nearly as popular as the ever visit-able Versailles. To reach Chantilly and it’s Château you won’t need a car. Instead, hop on a train Gare du Nord train station in Paris to the Chantilly-Gouvieux station.

The train covers around 55 km and takes less than half an hour. It’s then a fifteen-minute walk or so to the Château itself. On specific days, such as during the annual plant sale, regular shuttle buses run between the Château and the station.

As a result of Chantilly being less popular than other fairytale Châteaux in the region, there are fewer tourists and more space for you to wander around, making it the perfect escape from the crowds of Paris. If you get the chance to, I also highly recommend visiting Chantilly at golden hour. Sunrise at Chantilly is simply magical. The water is calm and the lake reflects perfect pink pastel skies…

Finally, if you want to make a weekend break of your escape from Paris to Chantilly, then I can recommend none other than a stay at Auberge du Jeu de Paume. I was lucky enough to stay at this five-star accommodation a few years ago and it is truly one of the most luxurious places I’ve ever been to. Complete with a spa and just a short stroll away from the Château, check prices and availability here. 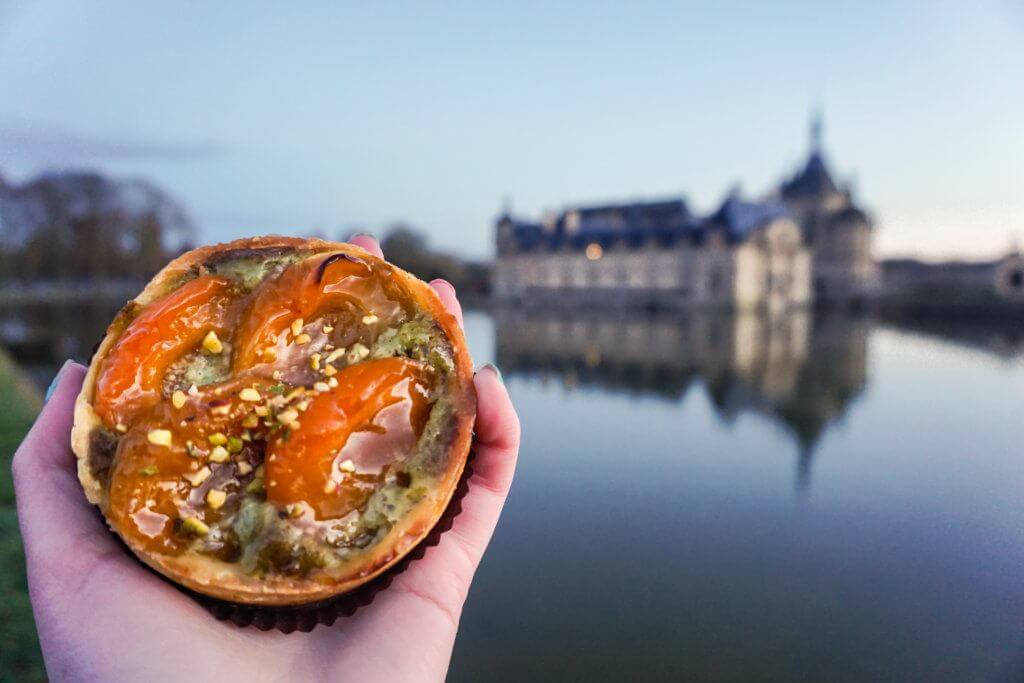 Enjoyed reading about how to take a day trip to Chantilly from Paris? Pin it now, read it again later: 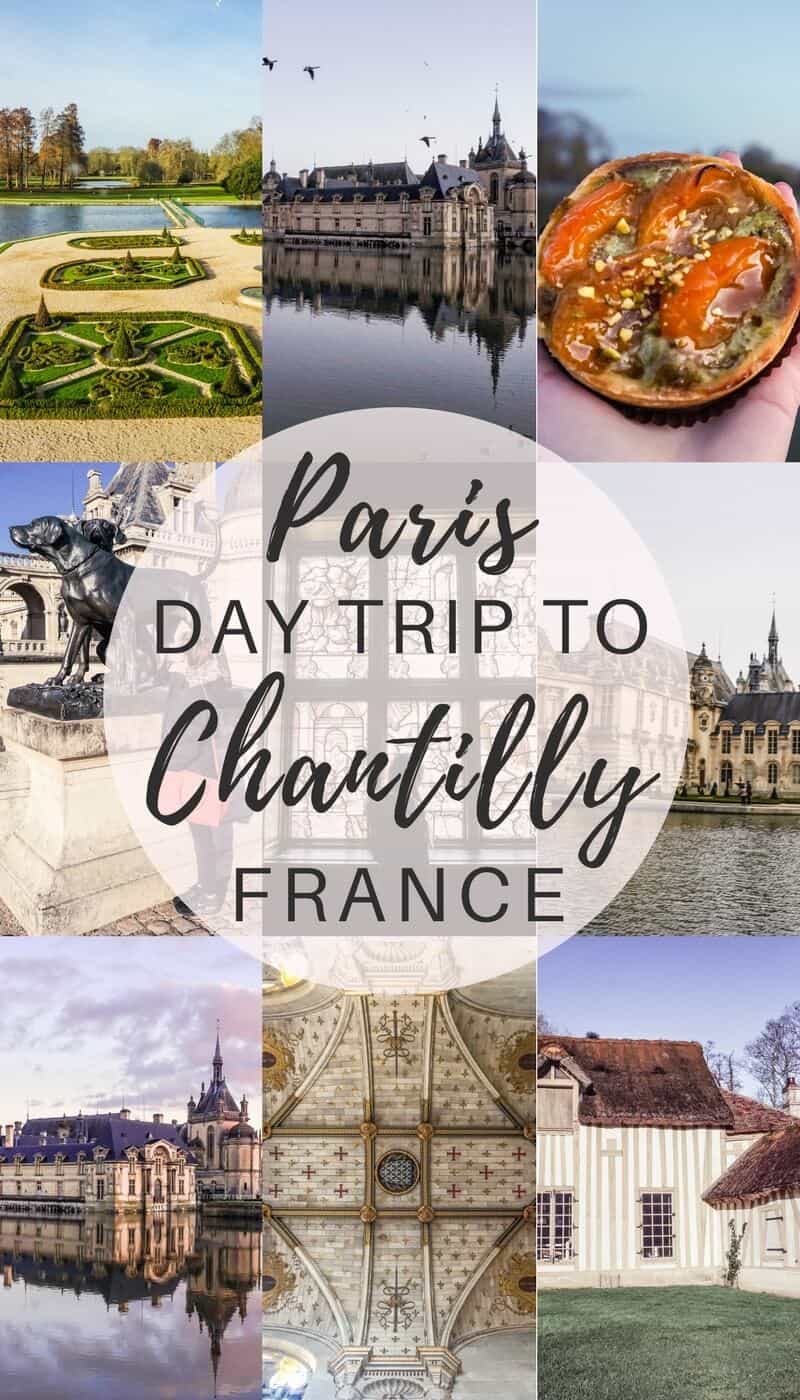 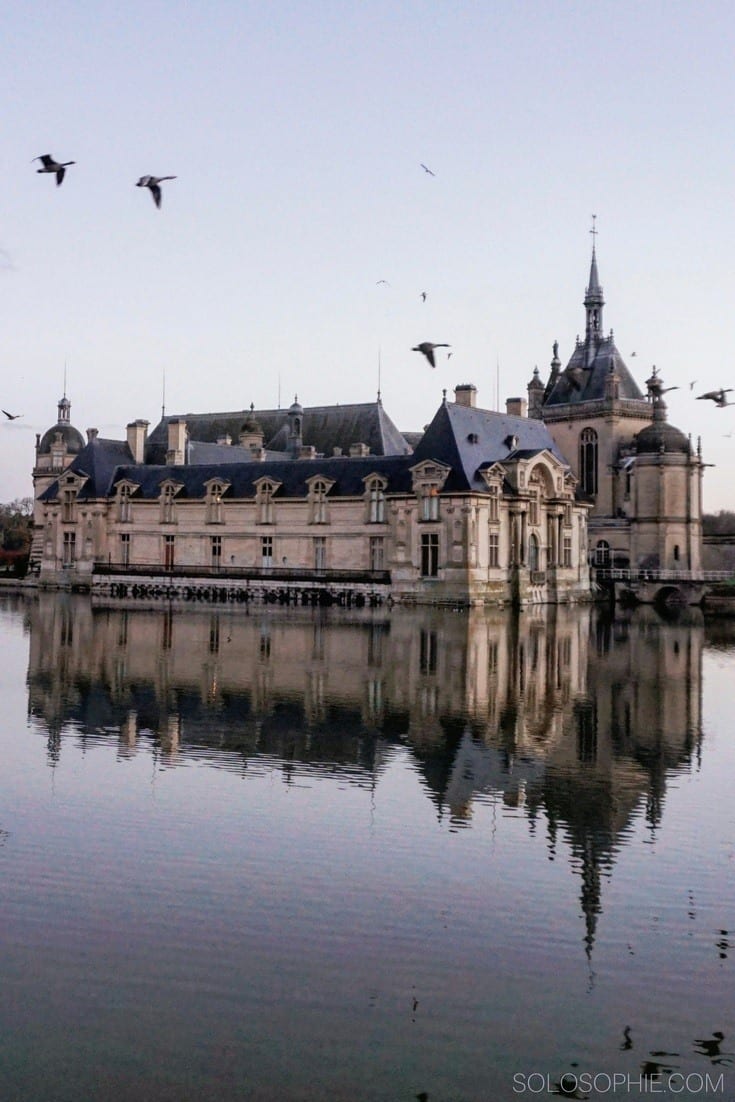 This is really helpful! Thank you for sharing this!