Travel through the ages with these gorgeous vintage illustrated Paris maps: a look at how the city of love has changed with time!

Perusing the internet earlier today- I know, I know, I’m a terrible procrastinator-, I found myself gazing at a (probably unhealthy) number of vintage maps. Ever since I can remember, copies of vintage maps have always hung on my bedroom walls in the form of postcards and posters.

Maybe it’s because I love studying history, more likely it’s because the rest of my room is what I like to call organized chaos, but there’s something so beautiful and organized about maps.

And it seems like I’m not the only one to think this way; illustrated maps have been around for thousands of years… possibly even since around 6000 BCE.

Bonne Map of Paris and its’ Surrounding Area

This map is over 200 years old and shows all of the towns surrounding Paris such as Sceaux (home to my fave French château), Versailles in the bottom left corner and Saint-Germain-en-Laye to the mid left edge of the map. The map was originally engraved to be used as a supplement to the Bonne Atlas. 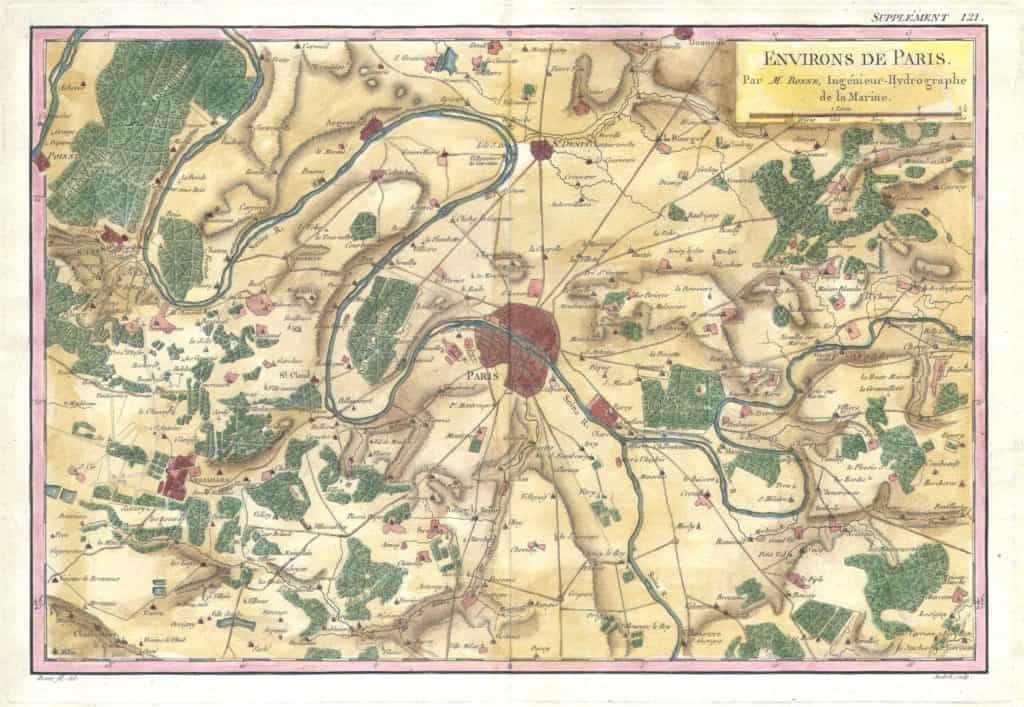 This seemingly badly damaged map shows Paris just after the French revolution had taken place. It’s funny to think that monuments like the Arc de Triomphe and the Eiffel Tower hadn’t even been built yet… In fact,  the Paris you see here was pre-Haussmann and so none of the grand avenues that make up the present day city had even been built!

Very little information about the Jean publishing house survives. The map itself is made of linen; a great material to print on as it can easily be folded without too much strain on the material and the linen itself can easily be mended. 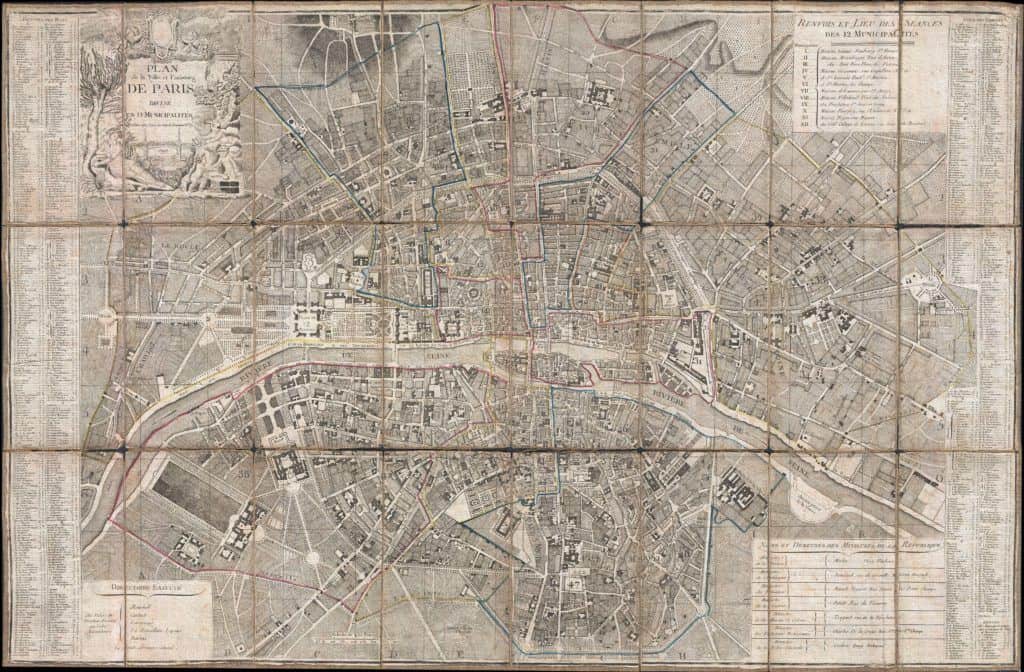 This colourful map shows the newly created 20 arrondissements of Paris (that still make up the city today). The map not only covers everything within the boundaries of Paris peripherique but also covers Bois de Boulogne and Bois de Vincennes (the two largest Parisian parks).

Rather morbidly, the first owner of this map A.H. Green was murdered in 1903 in a tragic case of mistaken identity. Upon his death, his personal effects were placed into storage. Surprisingly, his belongings have only recently been rediscovered and auctioned off in the past decade or so. 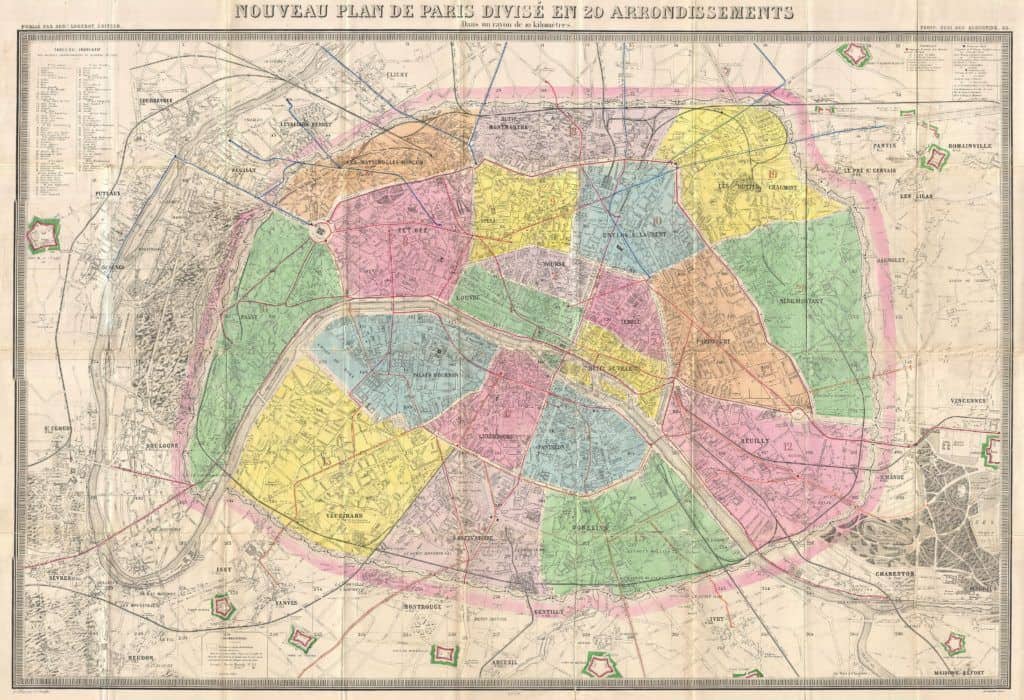 Not only have the 20 arrondissements that the city is divided up into have been drawn up, but construction of the Eiffel Tower has commenced and the Champs de Mars can be seen, drawn prominently on the left centre of the map.

This is a lithograph colour print. This means that a flat stone or metal sheet was carved with the design, rolled with ink and paper pressed on in order to print the design. As a result of this technique, lithography produces a mirror image of the original engraving. 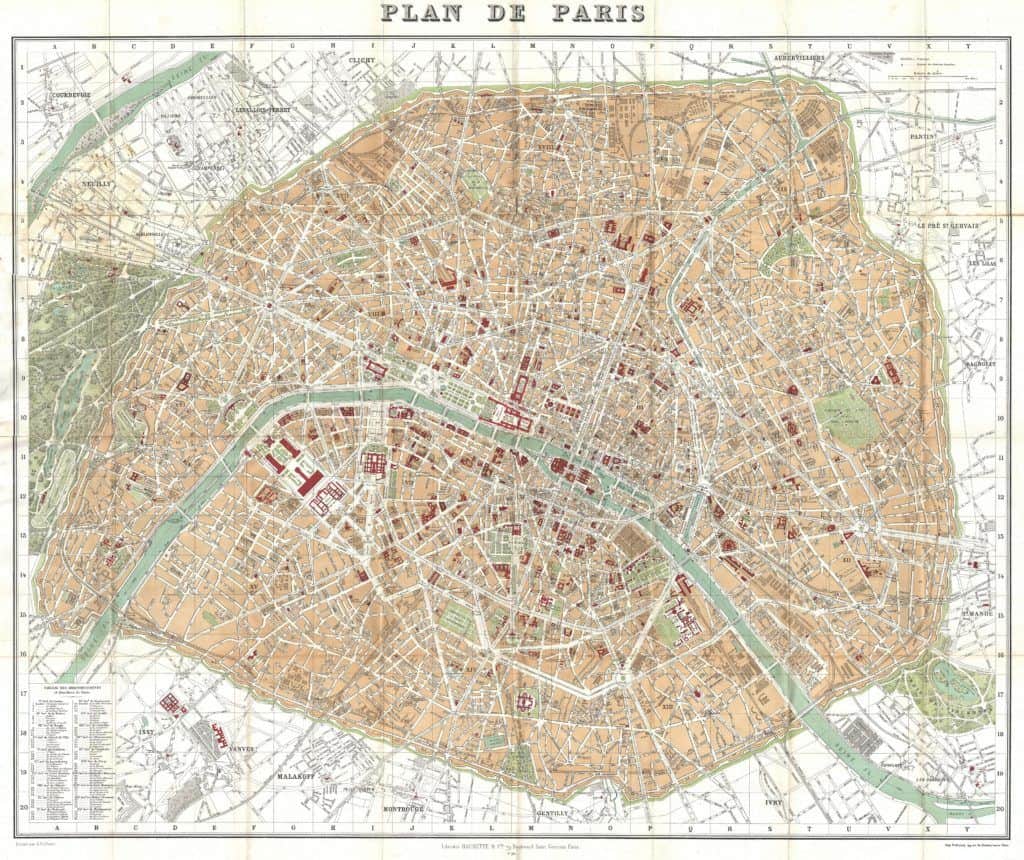 The Eiffel Tower has been completed and with the arrival of the 1920s, a more recognisable Paris begins to appear before our eyes. Roadways and metro lines are visible as the red lines overlying the ink and yellow background of this map. Dating of this map is provided by the appearance of certain metro lines and lack of others (that hadn’t been built yet)! 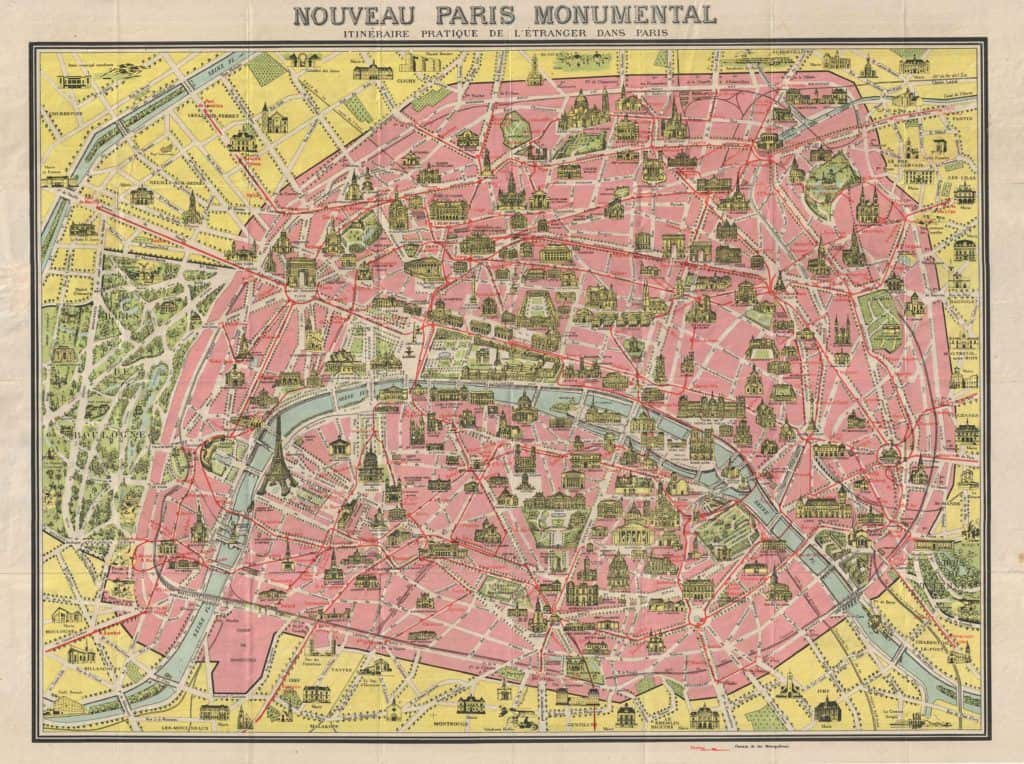 Another map by Leconte, this one with a slightly different colour scheme and, arguably, a little less to scale. .. Notably, the Jardin des Tuileries and Louvre are highlighted in the centre left of the map- recognisable by the large green strip running through the centre. 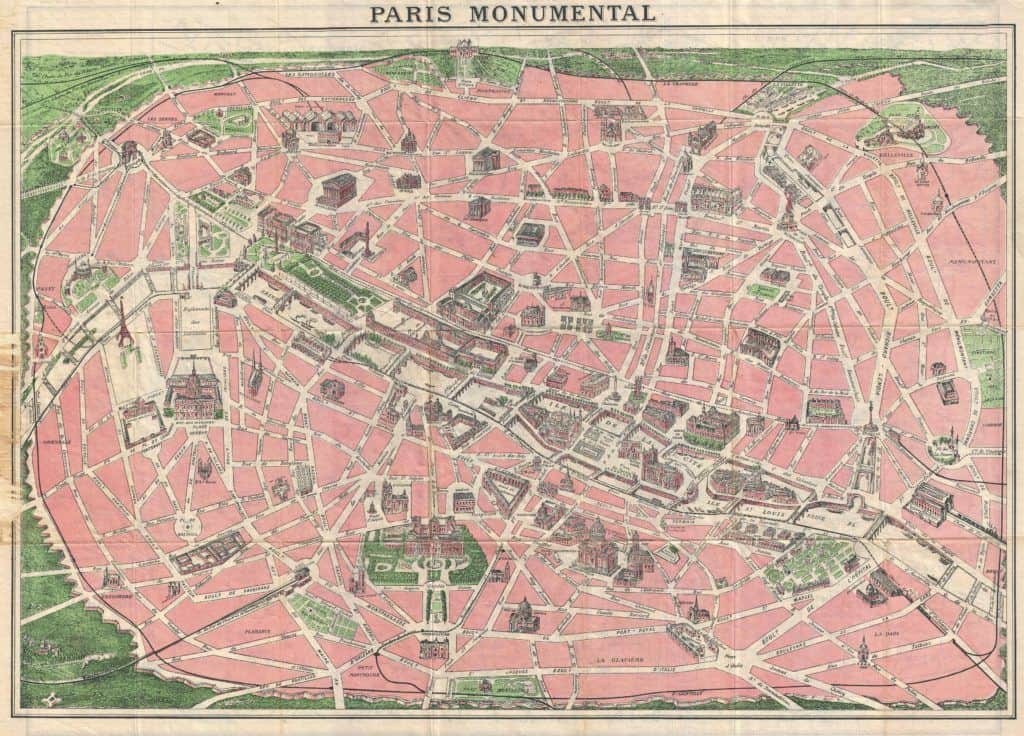 Of all the vintage illustrated Paris maps, this may well be my favourite map of all! This extremely attractive Robelin map of Paris illustrates beautifully most of the key monuments that can be found throughout the city. Again, although this map has no precise date attributed to it, the map can be easily dated due to the presence and lack of certain metro lines. 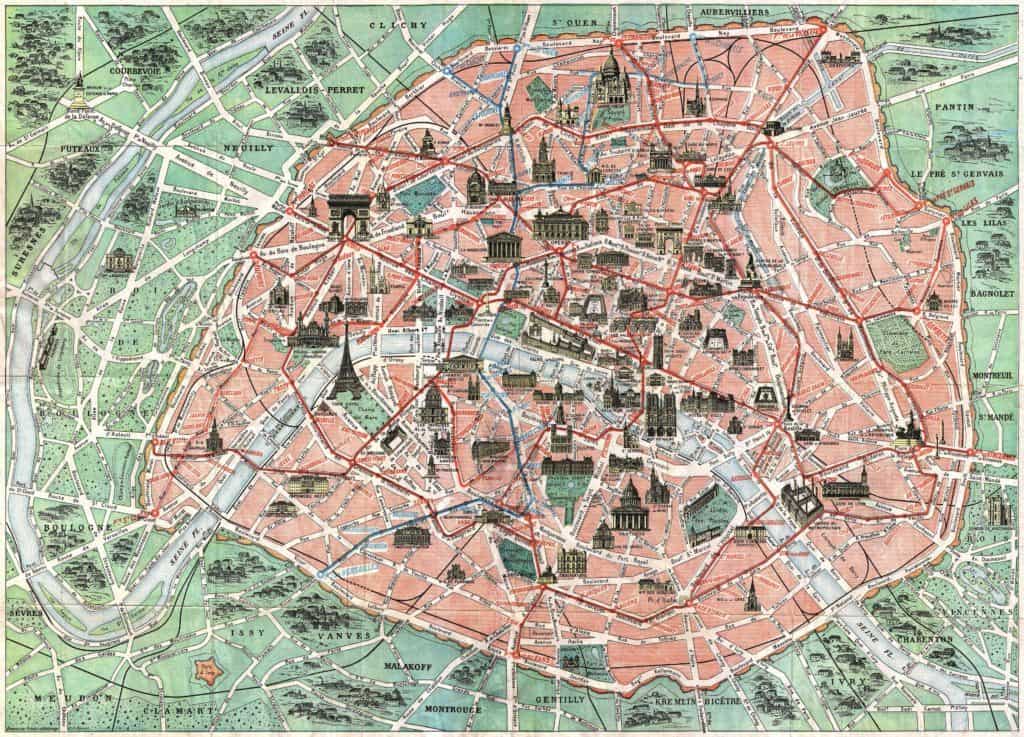 It's incredible to see how much Paris has changed over the centuries =o) Great finds!